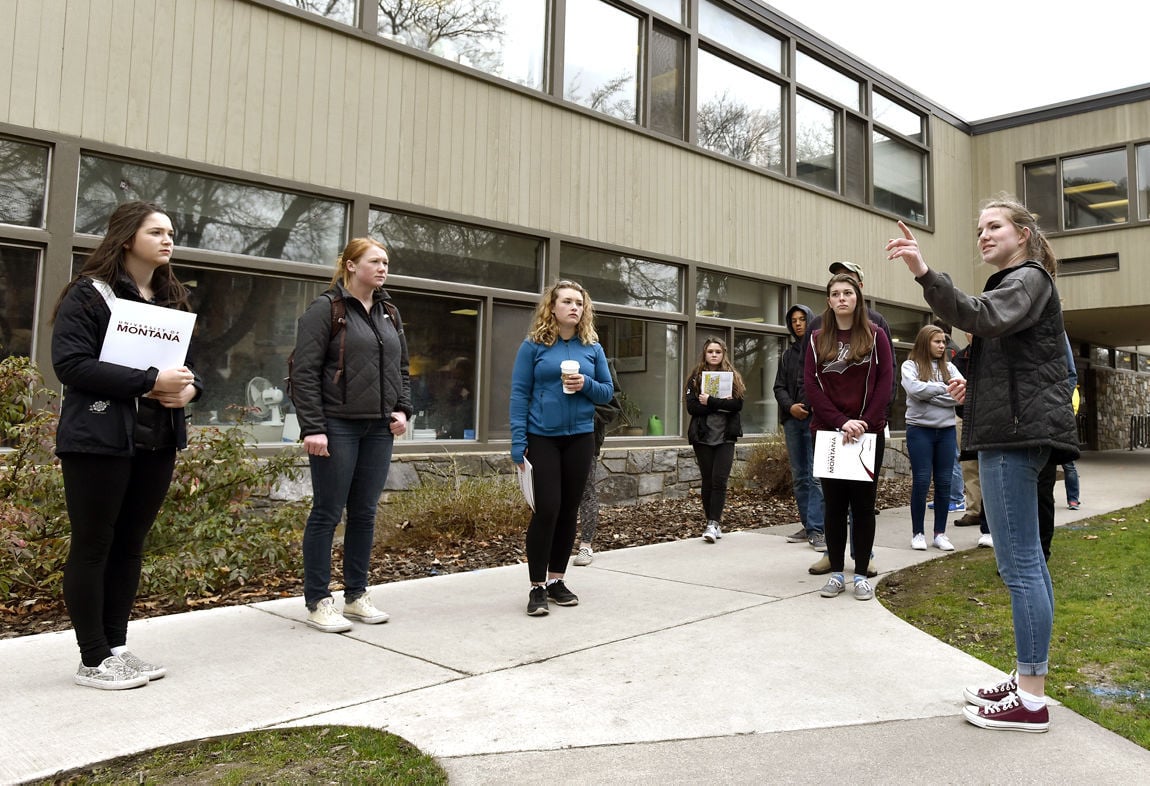 University of Montana sophomore Olivia Feller, right, leads a tour of campus for prospective students Tuesday. As many as 60 to 70 visitors a day have been touring UM lately, as high school students on spring break and their parents see what the university has to offer. 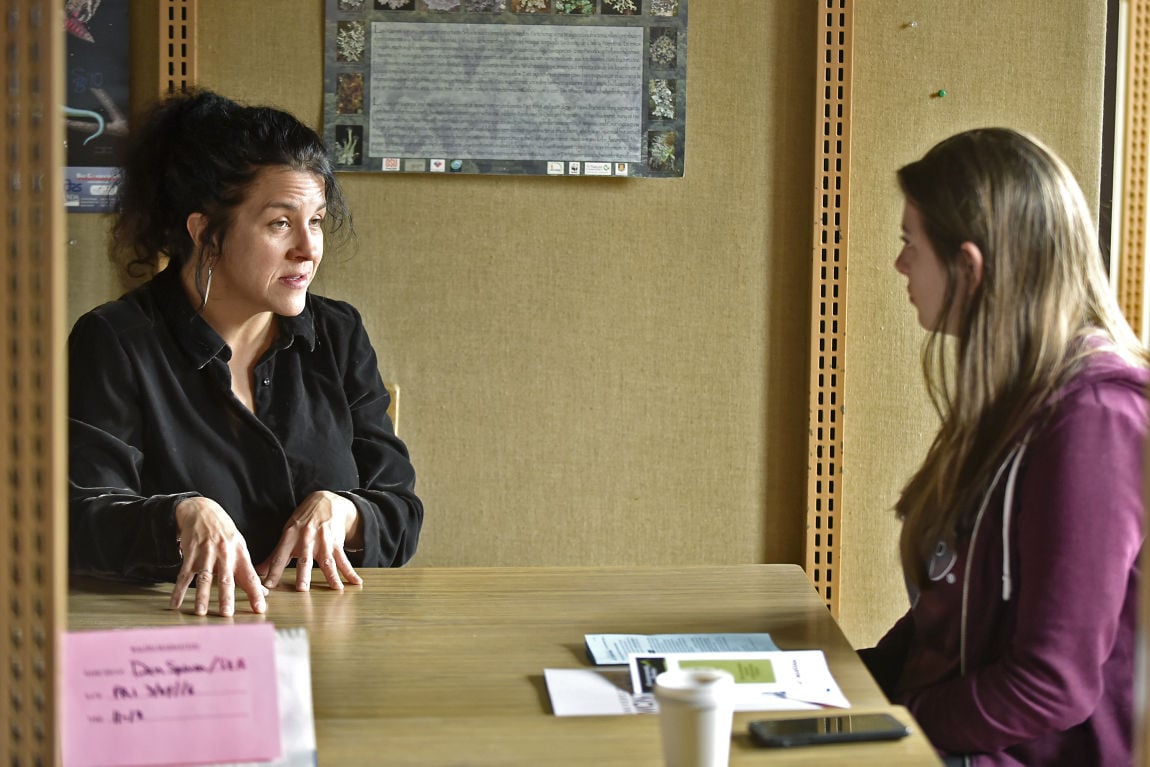 Julie Tompkins, left, of UM’s Environmental Studies Department, talks with Meaghan Palmer, a high school student from Maple Valley, Washington, as she and her father visited the campus on Tuesday. 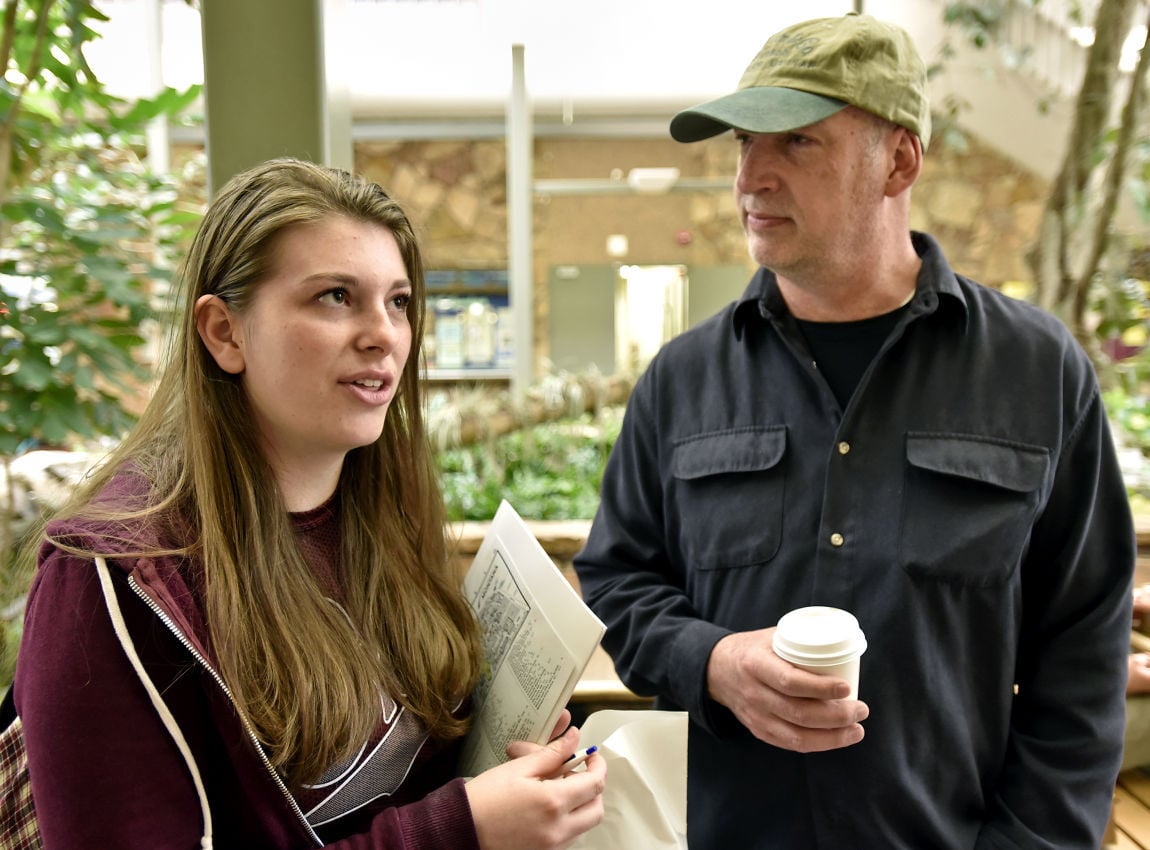 Meaghan Palmer and her father, Robert, visited UM because of her interest in science and conservation programs.

Lily Waldrup and her father, Jon Waldrup, were about to hike to the "M" after a tour of the University of Montana campus.

Lily is a high school sophomore from Sandpoint, Idaho, and spring break led her and her father on a road trip to colleges she's considering for the future.

Jon Waldrup is a fan of the Garden City – "Keep Missoula weird," he said – and he wouldn't mind if she enrolled at his alma mater, though he mostly wants her to enroll in a place she feels comfortable.

"Lily would be a third-generation U of M student," he said.

This week, UM students had mainly left for spring break, but the vacation week was also bringing as many as 60 to 70 visitors a day to tour the campus from Idaho, Washington and California.

Along the way, UM representatives touted everything from Glacier National Park to the vegetable garden that provides fresh greens to the UM Food Zoo in order to give students and families a look into the culture of the community and the state.

One day, an entire pack of visitors trekked up to the "M" at the suggestion of a tour guide.

Sharon O'Hare, associate vice president for enrollment and student success, said on the campus visits, parents key in on academics. Students do the same to a certain degree, but they also want to be comfortable.

"Their big focus is are they going to fit in," O'Hare said.

On Tuesday, Jamie Hewitt, a senior in the exercise pre-professional program, led one of the tours, and he said he volunteered to participate because he's shy.

"Giving tours to a bunch of people breaks that," Hewitt said.

On the tours, he shows students the buildings on campus, and he touts the programs at UM, such as the College of Forestry and Conservation. UM has suffered from declining enrollment for several years, and it has revamped its recruitment strategies, but the tours have long been part of its approach.

"Our forestry department is amazing," he said. "Where else do you want to go that offers what we have in Montana?"

Waldrup, who was also looking at Montana State University in Bozeman and the University of Idaho, said she was attracted to both the culture of UM, open to helping and mentoring newcomers, as well as the strong reputation of the School of Business Administration.

Her father works as a timber cruiser, and as her father's daughter, she was also attracted to the trees on campus. He wants her to feel at home.

"My main concern is that she comes someplace that she likes," Waldrup said.

He raised the subject of journalist Jon Krakauer's book about campus rape, which focused on Missoula to tell the story of the national problem. Waldrup said it was a difficult subject to discuss, but in the end, he believes the fact the author raised the issue meant accountability would go up.

"I feel like obviously, our person who led the tour was a woman, and she's happy here," Jon Waldrup said.

"It happens anywhere," Lily Waldrup said. "He did single out this school (UM), but rape culture is pretty prevalent around the world."

Inside the Lommasson Center, a white board with names and outlines of Washington and California welcomed students. There, Karissa Drye, associate director for New Student and Family Programs, said tour directors take a leadership seminar for honors credit.

In the class, they learn public speaking, but they're not given a script or told what to say to parents and prospective students, she said.

"What we want the tour to be is the student perspective," Drye said.

Hewitt talked about his first trip to Glacier, as well as the strength of academic programs at UM.

O'Hare said the tours are unique, designed for each student. The prospects connect with faculty in academic programs in which they're interested, and some might also meet with Disability Services or other advisers.

Many eat on campus, too, and sometimes, it's a staff member in food services who helps seal the deal, O'Hare said.

"This generation, they're foodies, but they also care a lot about where their food comes from," she said.

In a conference room inside Rankin Hall, Meaghan Palmer and her father, Robert Palmer, quizzed Julie Tompkins about the environmental studies program.

The Palmers, from the Seattle area, also toured MSU. Meaghan Palmer's interest in science and conservation led them to Montana, and both schools are high on her list of prospects.

"I've just always wanted to save the planet," she said.

She wants an academic program that matches her interest in conservation, but she wants to feel like she belongs, too.

"I also want to fit in and make lots of friends," Palmer said.

Robert Palmer wants his daughter to be employable in her field after she graduates, and he also wants to know about scholarships.

"She has really set herself up well to have lots of options," he said.

When he asked Tompkins about departmental scholarships, she told him large ones are available for graduate students, but only general university ones for undergraduate students.

Palmer's older daughter was taught by teaching assistants who weren't on the same page with their professors, and he doesn't want Meaghan Palmer to run into the same problem.

"The disconnect has been challenging at times," he said.

Tompkins said the EVST program has many smaller classes, and the advantage is that professors teach the courses themselves and are available to students. They're highly vested in their students' success beyond academia, helping majors secure internships and paid work in the field.

"More than anything, I think, our faculty want students to be successful outside of the classroom," Tompkins said.

Meaghan Palmer wanted to know if professors are focused broadly in the area of conservation, or more specifically in discrete fields. Tompkins talked about the depth of experience among faculty – "seasoned faculty, but not stodgy" – and their strong connections to conservation in the real world.

Palmer also wanted to know the gender split among students – it's even for undergrads, but two-thirds women in the graduate program, Tompkins said.

When Tompkins learned of Palmer's high interest in water conservation, she recommended the student connect with Vicki Watson, in her department, and also learn more about the conservation program in the College of Forestry and Conservation.

"We're not proprietary here," she said.

They talked about double majors, and Tompkins advised Palmer to take as many Advanced Placement courses as she can in order to get credit for general requirement classes at UM.

The week will bring more prospective students and parents to campus, and at the Lommasson Center, Drye said these couple of months are always busy.

This year, the number of freshman applications to UM has gone up "significantly" (UM has not put a figure on the increase), and UM is hoping to translate the interest into an uptick in enrollment in the fall for the first time since 2009.

If you're a high school student sharing a ZIP code with an REI store, maybe one in California or Vermont, chances are the University of Montan…

MISSOULA -- Enrollment at the University of Montana declined 7.5 percent this spring compared to last, for a headcount of 11,955, according to…

University of Montana sophomore Olivia Feller, right, leads a tour of campus for prospective students Tuesday. As many as 60 to 70 visitors a day have been touring UM lately, as high school students on spring break and their parents see what the university has to offer.

Julie Tompkins, left, of UM’s Environmental Studies Department, talks with Meaghan Palmer, a high school student from Maple Valley, Washington, as she and her father visited the campus on Tuesday.

Meaghan Palmer and her father, Robert, visited UM because of her interest in science and conservation programs.