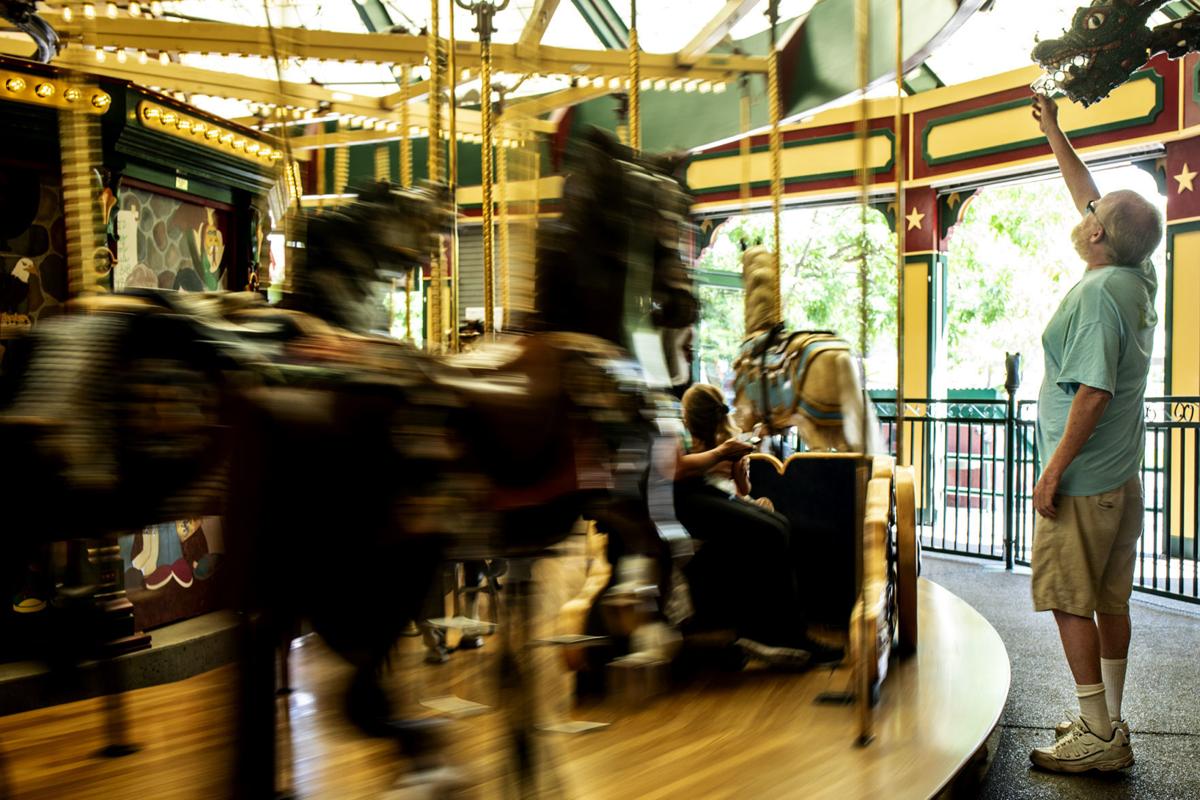 Jeff Overturf, an operator of A Carousel for Missoula for three years, adjusts the rubber rings on the carousel at Caras Park on Friday. After an eight-week closure, the carousel officially reopened to the public on Aug. 8 after closing on July 23 due to technical issues. 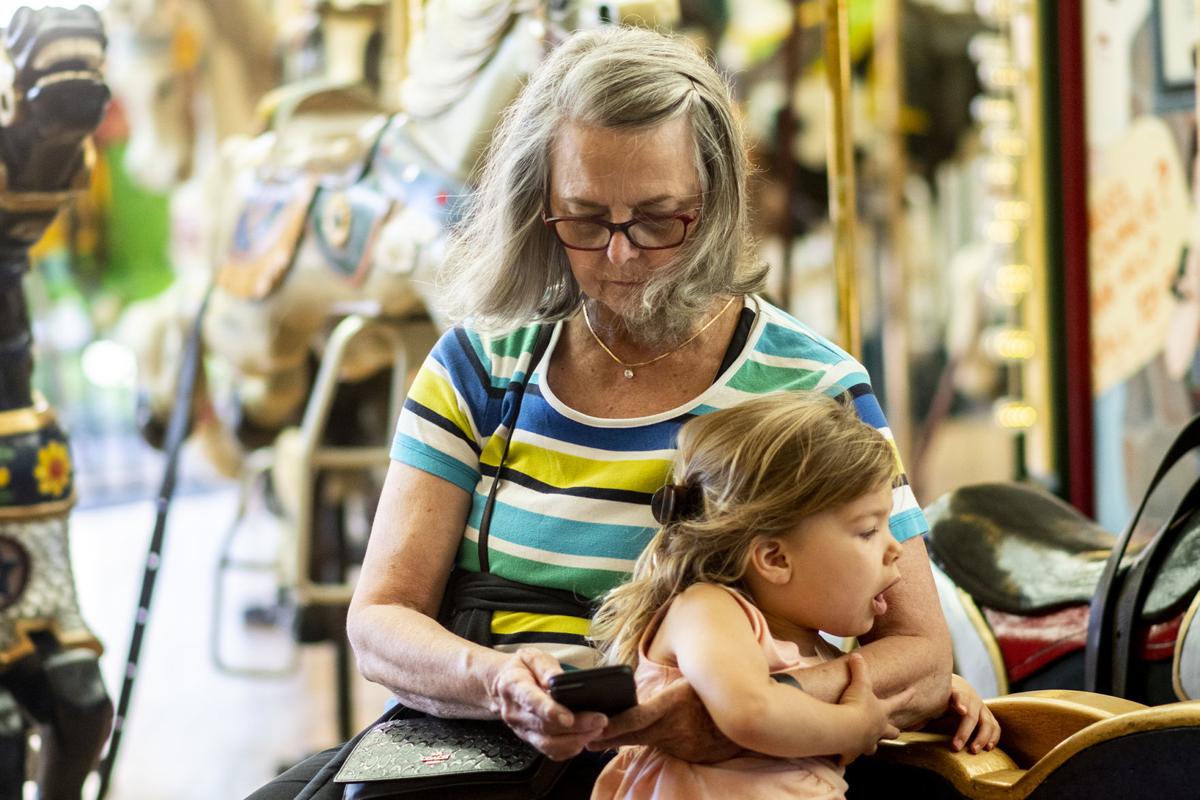 Charlie Winters rides the carousel with her granddaughter, Westlie, on Friday afternoon. Winters said it was Westlie's first ride on the carousel.

Jeff Overturf, an operator of A Carousel for Missoula for three years, adjusts the rubber rings on the carousel at Caras Park on Friday. After an eight-week closure, the carousel officially reopened to the public on Aug. 8 after closing on July 23 due to technical issues.

Charlie Winters rides the carousel with her granddaughter, Westlie, on Friday afternoon. Winters said it was Westlie's first ride on the carousel.

The layers of Ella Casile’s magenta tutu billowed in the breeze as she raced to the ticket booth for A Carousel for Missoula on Thursday.

Casile, who turns 5 this week, and her brother Oliver, 7, were all smiles as they waited to ride the carousel alongside their grandmother, Karrie Westwood.

The family was among many others who spent part of their Thursday afternoon on the 101-year-old carousel, which reopened on Aug. 8 following an abrupt closure during its peak operating season.

On July 23, Theresa Cox, A Carousel for Missoula's executive director, announced that the ride would be closed indefinitely due to a mechanical problem.

Cox didn’t know what to do when Colt Davidson, the ride’s mechanic, informed her that the bearing was broken, and operating it could harm both people and the machine.

Cox frantically started contacting local mechanics who previously worked on the carousel, in addition to other mechanics who specialize in carousels around the nation.

However, the morning after Cox broke the news to the Missoula community, Andy Troutwine, a local machinist and owner of Andy's Shop, stopped by the Missoula icon to look at the broken part. “Oh, yeah, I can make one of those,” Cox said he told her.

"It was amazing that he just showed up," Cox said.

Troutwine met with Jack Gillespie, one of the original crew that reassembled the carousel, to formulate a plan.

Over the next 15 days, Troutwine, Davidson and Mike Seitz, a friend of Troutwine, made a new cylinder bearing and got the carousel in working condition just in time to finish the season strong — and they did the project free of charge.

“It’s just something for the kids in town and such a good thing for Missoula,” Troutwine said.

The carousel makes about $1,000 a day during the 92-day summer season, which equates to 50% of its operating income for the year.

The two weeks that the ride was closed could have cost the carousel the season if the Missoula community hadn’t jumped in to help recoup the costs. An anonymous donor contributed $10,000 and local Realtor Dawn Maddux set up a GoFundMe that raised $6,500. Cox said things are now "looking great" for the Missoula landmark.

"The carousel has always been incredibly blessed with community support," Cox said. "The community feels like the carousel belongs to them because it does … and because of that, everyone takes an ownership interest in it."

The closure of the carousel came just five weeks after Dragon Hollow Play Area reopened following a construction project to update, repair and expand the playground, in addition to making it accessible to children of all abilities.

“It’s been a long summer of disappointed kids,” Cox said, adding that it's hard to tell a 3-year-old that they can't play on the playground or ride the carousel because it needs to be fixed.

Cox said the community helped raise nearly $350,000 for the Dragon Hollow project, and that close to 1,000 people volunteered their time for labor.

Cox said that although the ride is still doing some "bucking and bumping,” it will remain open while Troutwine, Speitz and Davidson work to get it running smoothly again.

“As far as I know, there’s nothing dangerous about it and it’s not harming the machine,” Cox said “It just provides a more exciting ride than a lot of people like.”

Cox also said that the mechanics suggested that the 1918 carousel may need to be taken apart and worked on sometime over the next 10 years, but it’s not something that needs to be done immediately.

The carousel will be open from 11 a.m. to 7 p.m. for the rest of the summer. It's common for the carousel to stay open from 10 a.m. to 9 p.m. during the summer, but people are encouraged to call before visiting during the extended hours.

Troutwine and Speitz were awarded the "Special Recognition Service Award" by the Western Montana Fundraiser's Association for their work on the ride.

A mechanical problem has forced the popular carousel at Caras Park to close indefinitely and likely lose significant summer revenue.