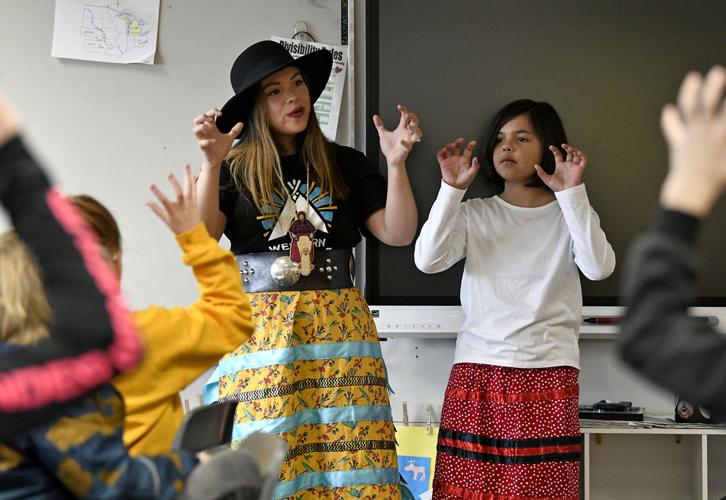 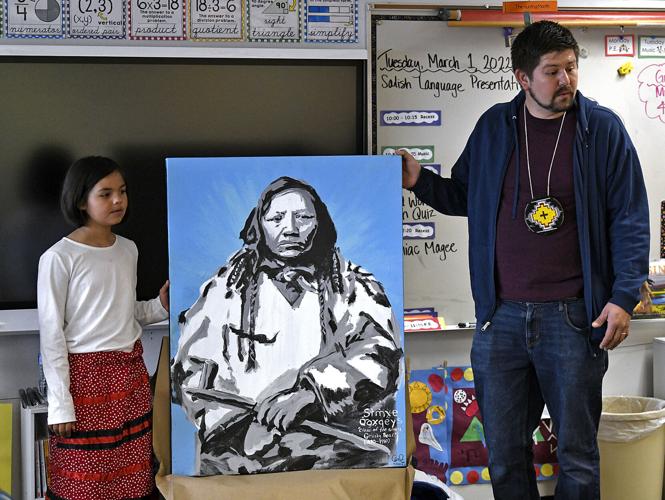 Students at Chief Charlo Elementary recently learned over 20 different signs from Plains Indian Sign Language through an initiative grant impacting education across the Missoula County district and beyond.

Decker is one of only a handful of people who can speak Salish fluently. She and her four children are now among the first generation of bilingual speakers of her community in nearly 75 years.

She was joined by her daughter, Maninłp Xʷełx̣ƛ̓cin, who is the same age as the students in Carlson’s class. Maninłp is the great-great-great-grandchild of Chief Charlo.

Decker started the lesson by speaking about the school’s namesake, Chief Charlo, or Słmx̣e Q̓ʷox̣qeys in Salish, meaning “Claw of the Little Grizzly.” He was head chief of the Bitterroot Salish people from 1870 to 1910.

Decker walked students through how to sign Chief Charlo's name in Plains Indian Sign Language by making a motion for "little" with her right hand, placing her hands above her head, resembling bear claws, and then pulling her hands down to her waist.

Decker asked the students how long they thought the Bitterroot Salish people inhabited the area now commonly referred to as Missoula — some students estimated 100 years, another shouted out 10,000.

In reality, the Bitterroot Salish people have inhabited the area for closer to 14,000 to 16,000 years, back when Glacial Lake Missoula filled the valley, Decker said.

At that time, the area was referred to as Nmesulétkʷ, or "place of the freezing water."

“So this is like the land that we’re on,” Decker said, extending an arm in front of her parallel to the ground. “The sign for cold and then a big water, it’s like you’re scooping up a bucket and then you’re going up to your face.”

The Salish language is incredibly nuanced and many of the words resemble what something looks like or how an animal acts. Some words are also derived from onomatopoeia.

The same can be said for many words in Plains Indian Sign Language. For example, the sign to describe a white tail deer mimics its tail as it runs away. There are 12 individual words to describe different developmental stages of a deer, Decker said.

“So our signs and the Salish language that goes along with it are descriptive of whatever those nouns are,” Decker said.

Later in the lesson, Decker explained the nomadic habits of the Bitterroot Salish people and their nuanced names for specific locations.

After Glacial Lake Missoula was no more, the Salish name for the area transitioned to Nłʔaycčstm, or "place of the little bull trout," which is on the Clark Fork River near the University of Montana. Near the Clark Fork’s confluence with the Blackfoot River is known as "the place of bull trout" because larger fish could be found there.

“Every hill, every bend in the river has its own name,” Decker said. “So Salish, it’s very descriptive.”

Decker also shared the history of her people, explaining that the Lewis and Clark Corps of Discovery was not perceived as a heroic feat to Indigenous people already residing on the land they sought to explore.

“We already knew the land, we know everything about these animals, these plants, because Salish people are scientists,” Decker said.

Chief Charlo refused to sign treaties that would remove his people from their land and move them onto reservations, she said. But nearly 20 years after the U.S. government attempted to get his signature on the Hellgate Treaty of 1855, his signature was forged and they were moved to the Flathead Reservation with the promise of housing and food.

In preparation for the move, Salish people sold their heating stoves and did not plant crops. By the time they were forced to move to the reservation, many people were starving. Many died on their walk from the Hamilton area to the Flathead Reservation.

“It’s a lot of really hard history that’s important to know though, because that’s what happened to the Salish people. They were removed, they were forced into boarding schools and that’s why a lot of our language loss occurred,” Decker said.

The students used these signs in a game, where two “hunters” had to interact with their classmates roaming the room, making signs for different animals. When the “animals” were tapped by the “hunters,” the hunter had to demonstrate each sign in the correct order before the animal was moved to their individual camp. The hunter with the most animals stored at their camp won.

Decker’s husband Cameron, an artist, and their son Nštews Xʷełx̣ƛ̓cin paid a visit to Carlson’s classroom to present a gift Cameron created for the school. Nštews is also a descendant of Chief Charlo.

“I just asked if there was a painting of Chief Charlo at all, or what was the imagery like for Chief Charlo and I just was really inspired to want to give you a gift,” Cameron said.

He unveiled a portrait of Chief Charlo to be displayed in the school, whose curriculum focuses on science, technology, engineering, art and math.

“Our ancestors were scientists, engineers, mathematicians, artists and there’s a long tradition here, especially in this place, and so this connection here is shared values and that’s what I hope this represents,” Cameron said.

Arlee woman works to preserve and teach the Salish language

Supaman visits Sussex School for performance on inclusion and humanity

The protest was the latest of many efforts by UM students to have Clayton Looney removed from his position on campus for using racial slurs against Black people and Muslims.

Chris Holm and her horse, Cool Hand Luke, won the Morgan World Championship in reining in 2021 at a show in Oklahoma City.

MCPS Superintendent Rob Watson announced last week he will leave his position at the end of June.

The 2022 Spring Mack Days are coming to a close and an elusive $10,000-prize fish named "The Captain" remains at large.

US to ship $100M in military aid to Ukraine

US to ship $100M in military aid to Ukraine

Russian soldier pleads guilty to war crime in Ukraine: 'I apologize for everything I've done'

Russian soldier pleads guilty to war crime in Ukraine: 'I apologize for everything I've done'

Some states prep for more patients if Roe falls

Some states prep for more patients if Roe falls