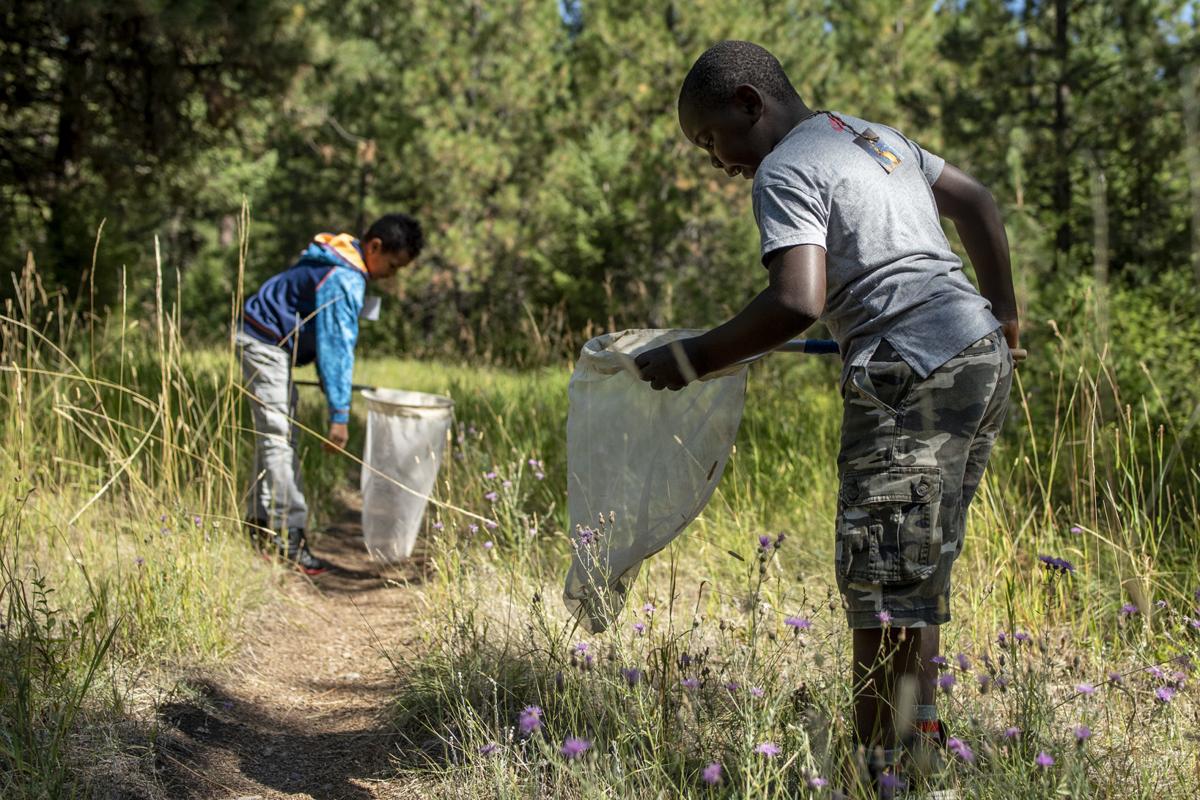 Christian Musehenu, 9, catches butterflies in a net while participating in a nature walk for kids in a Soft Landing Missoula program put on by the National Wildlife Federation in partnership with the Missoula Art Museum and Insectarium at Pattee Canyon Picnic Area on Tuesday morning. Christian and his sister Olivia, both Congolese refugees who came to America from a Namibian refugee camp, participated in one of the three childrens' groups in the nature walk. 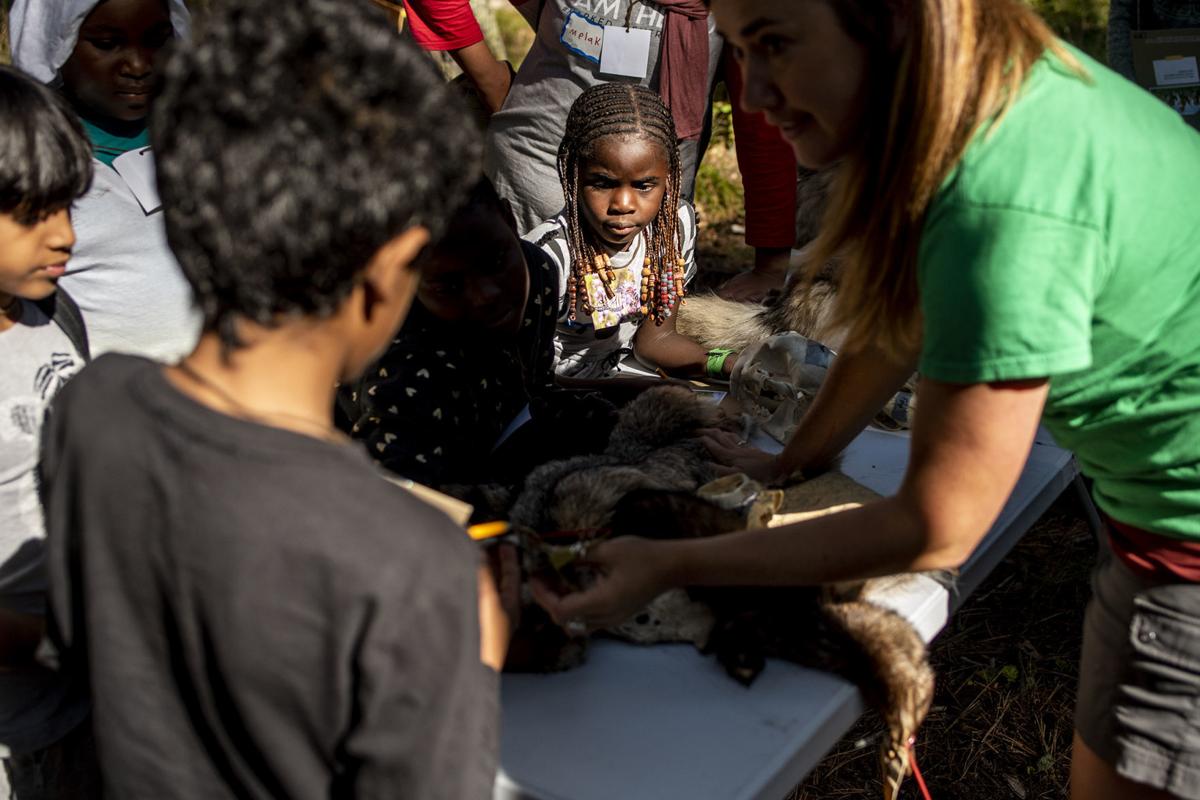 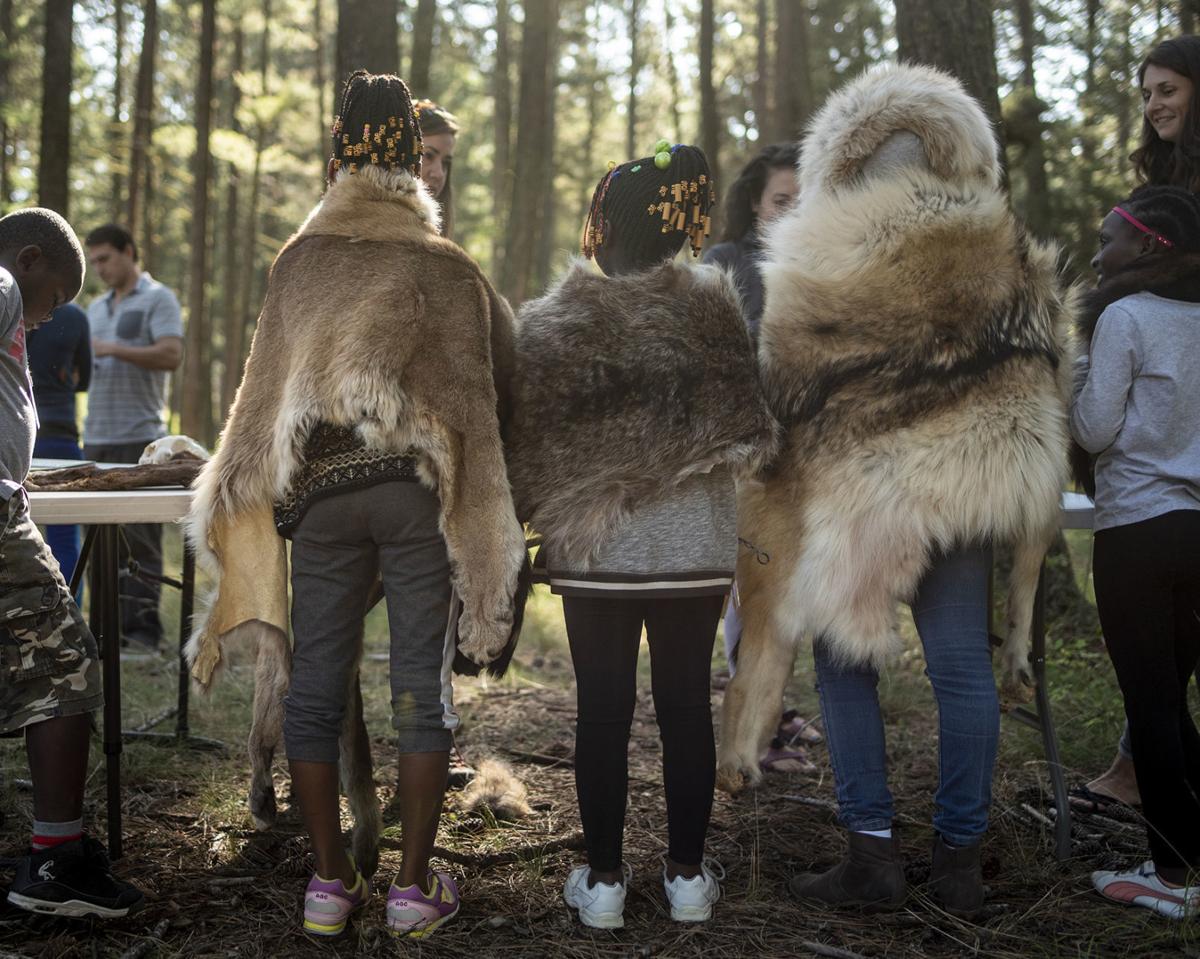 Children from around Missoula experienced the woods and trails as well as met surprise guest, Ranger Rick, the official mascot of the National Wildlife Federation.

Christian Musehenu, 9, catches butterflies in a net while participating in a nature walk for kids in a Soft Landing Missoula program put on by the National Wildlife Federation in partnership with the Missoula Art Museum and Insectarium at Pattee Canyon Picnic Area on Tuesday morning. Christian and his sister Olivia, both Congolese refugees who came to America from a Namibian refugee camp, participated in one of the three childrens' groups in the nature walk.

Children from around Missoula experienced the woods and trails as well as met surprise guest, Ranger Rick, the official mascot of the National Wildlife Federation.

Twenty young visitors to Pattee Canyon, some from as far as Saudi Arabia and Eritrea, spent Tuesday catching butterflies, drawing with oil pastels and getting to know wildlife through their pelts.

Soft Landing Missoula, working in coordination with the regional office of the National Wildlife Federation, brought the group into woods just outside of Missoula to enjoy some of the wilderness that their new home offers.

“This is the first time we’ve worked with the National Wildlife Federation, and the response has been pretty positive,” said Greta Bates, the family resource manager for Soft Landing Missoula.

Since 2017, Soft Landing Missoula has helped to resettle hundreds of refugees through the International Rescue Committee. Along with providing language training, education and employment resources to incoming refugee families, the nonprofit organization also conducts outreach by partnering with other local groups.

This summer, Soft Landing Missoula took a group to Glacier National Park, where many of them ignored the wind and the rain and took a dip into Lake McDonald. They also spent a day fly fishing, hosted by Backcountry Hunters and Anglers.

“That was different for a lot of them because so many of them are used to net fishing, as opposed to using a fly and a rod,” Bates said.

The kids who attended Tuesday’s event traded in a rod for a net, walking through the tall grass of Pattee Canyon to snag one of the dozens of butterflies hovering in the air. Guided by Allison Dehnel of the Missoula Insectarium, they collected wood-nymph and pine white butterflies as part of one of three stations arranged by the National Wildlife Federation.

Before the bug hunt, the kids got to use oil pastels, “fancy crayons” as described by Missoula Art Museum educational assistant Jessie Novak. The museum, through its “Mam on the Move” program, had a kiosk and several cups of oil pastels waiting. Each participant was assigned a pine cone, and Novak and Erin Roberts, one of the museum’s teachers and art guides, walked them through creating their impression of the small piece of nature.

Naomi Alhadeff, the Montana education coordinator with the National Wildlife Federation, had the pelts of wolves, mountain lions, skunks and others draped across the tables of her station. While passing around each pelt, Alhadeff explained where each animal lived, and what it liked to eat. To better explain the difference between predators and prey, she had a few skulls at her station as well.

“See these teeth here?” she asked a group of children clustered around her table, pointing to the knife-like canines on a mountain lion skull. “What do you think this guy eats?”

The presentation quickly turned into a fashion show, however, with some of the kids draping the pelts across their backs and around their necks. The wolf pelt, according to 9-year-old Christian Musehenu, was the best part of the wildlife station. He spent the morning exploring the three stations with his sister, Olivia.

Sylvie Coston, interning with the National Wildlife Foundation (NWF) for her second summer, reached out to Soft Landing Missoula, the Insectarium and the Missoula Art Museum in order to arrange the event.

“As an organization, I noticed that the NWF is a proud supporter of diversity and equality,” she said. “I saw working with Soft Landing Missoula as an opportunity to reach out, do our part and open our arms to refugee families. We also get to share why we love Montana.”

For the last portion of her station, Alhadeff showcased the pelts of local herbivores, with each sample hung on a board and a picture of the animal that they belonged to waiting beneath. When she got to the moose, Christian asked if they eat people. Alhadeff answered no, but said they can be mean.

Alhadeff said along with promoting conservation through legislative action, one of the missions of the NWF is fostering an appreciation for wildlife through education. Getting kids out into nature and "becoming little scientists," she said, is part of developing that appreciation.

“Just from the response we’ve gotten this morning, there’s no reason not to replicate this next summer,” she said.

Maged Nosshi wiped sweat out of his eyes with his red shirt as he came off the soccer field. He just finished one of several matches for the d…