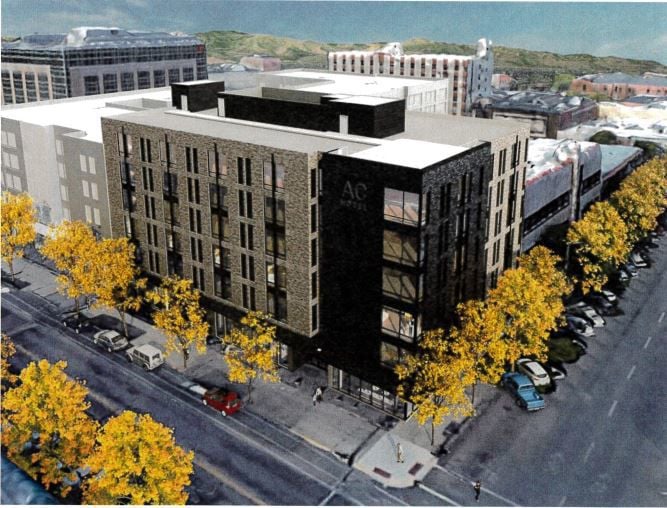 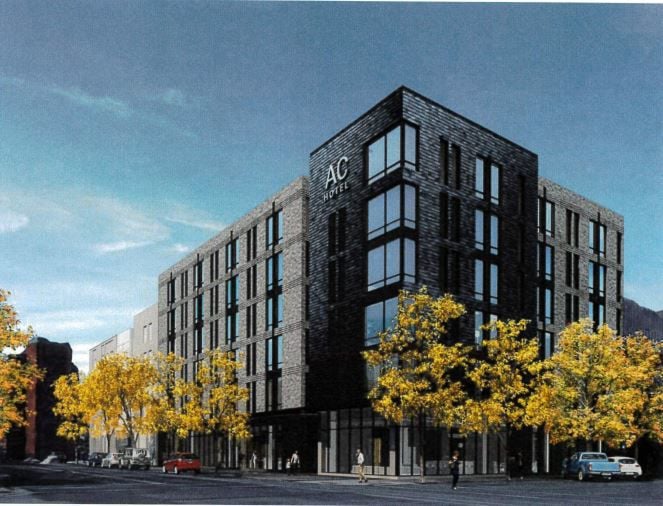 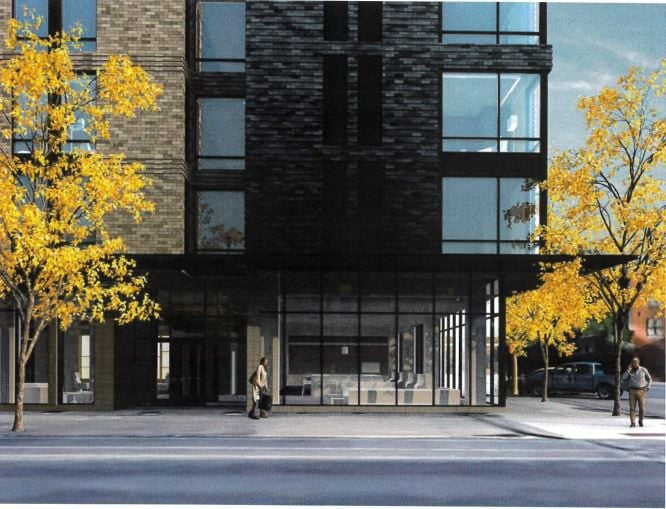 A downtown developer said he’s secured the rights to an 83-spot downtown parking lot — 120, if trained valet drivers do the parking — as he plans to build a new $20.6 million, six-story hotel.

In addition, the Missoula Redevelopment Agency's board of commissioners unanimously approved up to $1,886,105 in Tax Increment Financing (TIF) for public improvements to the site, including pedestrian-scale street lighting, utility relocation, salvaging materials, and state prevailing wage rates for construction workers. The old Firestone building currently sits at the site at 175 Pattee St., and MRA executive director Ellen Buchanan said the new project will generate $186,000 more per year in property taxes than what is there now.

Andy Holloran and Homebase Partners are hoping to start construction on the 105-room AC by Marriott in June. In addition to getting a 20-year right of first refusal on the parking lot at the southwest corner of Main and Pattee (which has been gated for many years), Holloran also pays the Missoula Parking Commission for an additional 93 spaces in the Park Place garage's upper levels nearby.

"Our business model is to begin valet service," Holloran explained. "The Mercantile (hotel) has been running extremely high occupancy. It was sold out last night. It's been extremely well-received. People are eating and drinking and shopping downtown and going to the Wilma and the Top Hat and all that good stuff."

He also hinted that the newest parking lot he's secured the rights to could be the site of a future "third project" eventually.

"I can't imagine how many people in our community are impacted by a project like that," Holloran said. "It's fun to see."

The proposed new AC by Marriott hotel would have a rooftop garden/bar area and a "speakeasy-style" basement restaurant. It will provide roughly 33 full-time jobs, according to Buchanan. It would not be extended-stay, unlike the Merc, and Holloran said it would cater to younger visitors and business travelers on shorter stays.

The city would have to issue bonds to pay for the TIF reimbursement, which means the entire City Council will, in the next few months, have to approve the TIF help. Buchanan said the new property taxes generated by the hotel would be more than enough to finance the debt service on the bonds.

Missoula City Council president Bryan von Lossberg was at the MRA board meeting on Thursday along with council member Gwen Jones.

Both expressed interest in seeing a more detailed breakdown of the costs associated with the TIF assistance. They also said they hoped that the TIF for the project wouldn't hinder any future projects, especially as the city recently was donated a block of nearby land where the current library sits. Mayor John Engen has hinted that the city would like to build affordable housing, perhaps, at the site and TIF might be used for that.

"The library investment is a huge game changer in this district," Jones said. "We need to find a balance here with other opportunity costs."

Jones also expressed interest in seeing if, and why, some of the costs associated with the Firestone deconstruction are higher than similar efforts on the old Mercantile building. Holloran and Buchanan then gave her the individual breakdowns for each cost, such as $217,000 for structural shoring so the historic building next door doesn't collapse.

Von Lossberg said the council would like to see a complete breakdown of every expenditure that the TIF is paying for, including multiple bids to prove the most cost-efficient route is being taken on behalf of taxpayers.

"Council needs to look at those amounts in some context that gives us some confidence in those amounts," he said. "We need to see multiple bids. That's the level of granularity we're used to looking at. We need as much context around those numbers as we can get."

Von Lossberg said there needs to be better communication with the public about what the TIF pays for.

"I would challenge us all," he said. "We need to do a better job both from a council standpoint and with the community in explaining what those dollars are achieving on the ground. There's a tendency when you work with this on a regular basis to understand that somewhat implicitly, but we need to be able to show."

He said he hopes Holloran presents slides and pictures that show what the project would look like without TIF assistance compared to with the funding.

"It is easy for people to just think there would be sidewalks there anyway, so what's going to happen differently with this investment of increment financing?" he said.

Buchanan said the TIF is paying for, among other things, curb extensions, sidewalk replacements, street trees and diverting the materials from the building away from the landfill and back to re-use in other projects.

"Only a very tiny part of this building cannot be reused or recycled in some way," Buchanan said. "I'm floored at the analysis (Dick Anderson Construction) did on this."

Von Lossberg continued by saying he hoped that other projects wouldn't be scaled back because there's only so much money to go around in the district.

"This is a dynamic landscape," he said. "Ellen, you and I have talked about potential quiet zone work around the railroad crossing there. So there are some other projects here, so that's that lens that we need to make sure we're not forgoing other opportunities that are important to the community relative to another investment."

Board member Ruth Reineking said she wanted to make clear that none of the TIF was going to fund anything that would only benefit private companies or the developers.

In the Front Street Urban Renewal District in Missoula, all new property taxes generated since the district was formed are administered by the MRA and put back into the district for projects that are supposed to eliminate blight and benefit the public.

The district was formed in 2007 and will sunset in 2044 unless additional bonds are sold. It has grown in value from producing $1.4 million in tax revenue when it was created to $1.9 million every year now. When it sunsets, the full tax revenue from the district will go to the city's general fund.

Almost exactly three years after it was first proposed, the new Mercantile hotel in downtown Missoula finally opened to the public with a ribb…