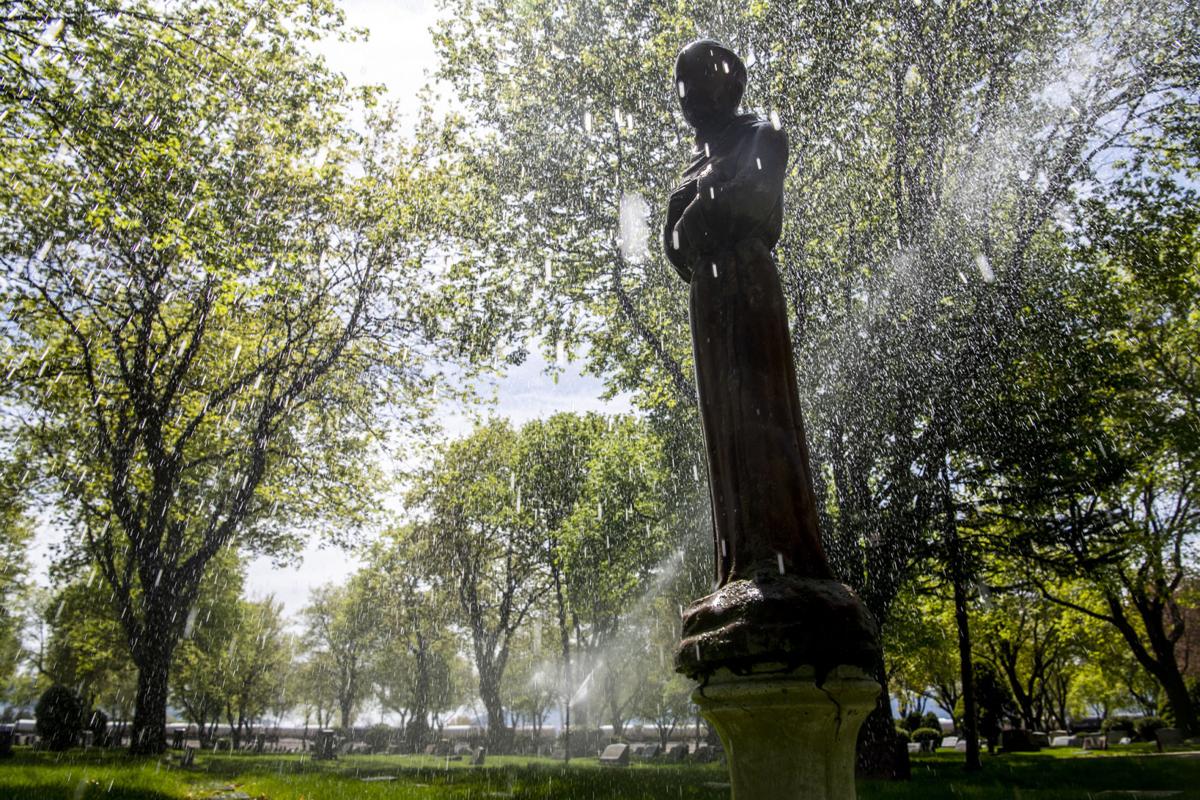 Water rains down from a sprinkler stream on a statue at the Missoula City Cemetery on Wednesday afternoon. Staff are making a push to market the cemetery as more than just a place where the dead are buried. 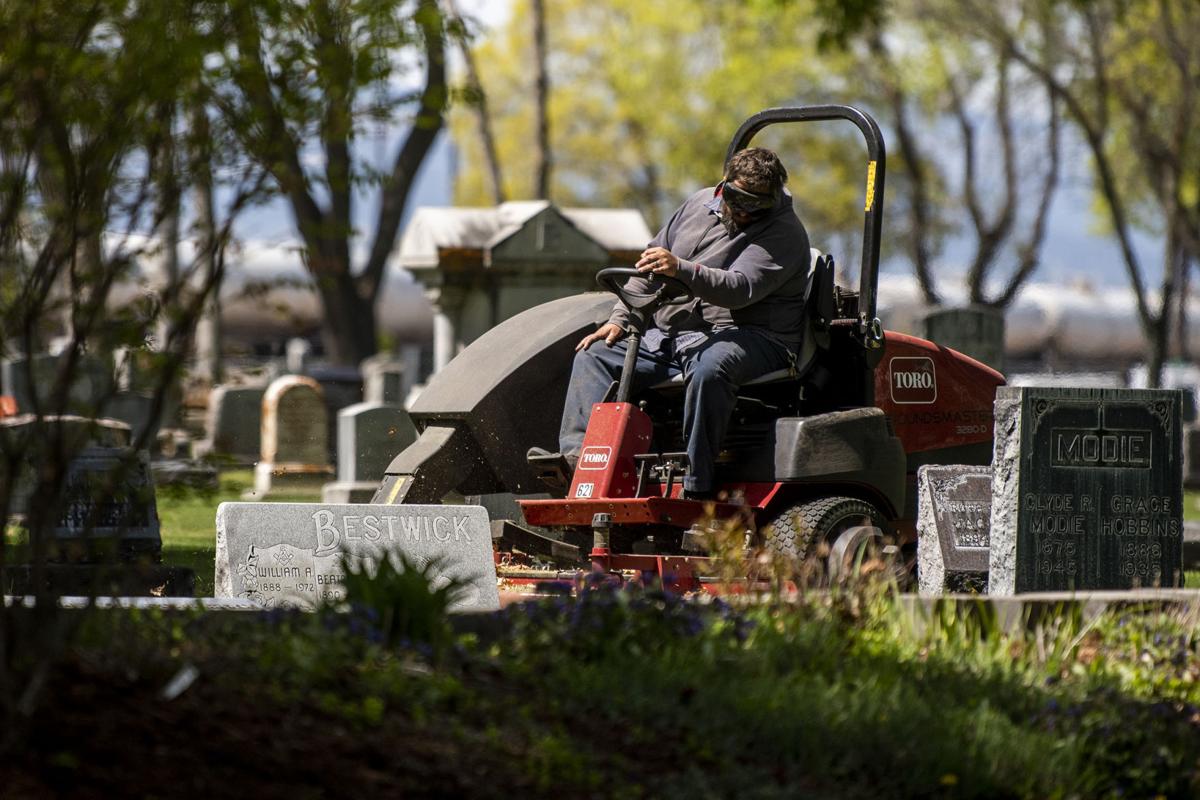 A maintenance worker mows the lawn at the Missoula City Cemetery on Wednesday. Staff are putting the finishing touches on a self-guided bike tour open to the public on May 15 and May 16. 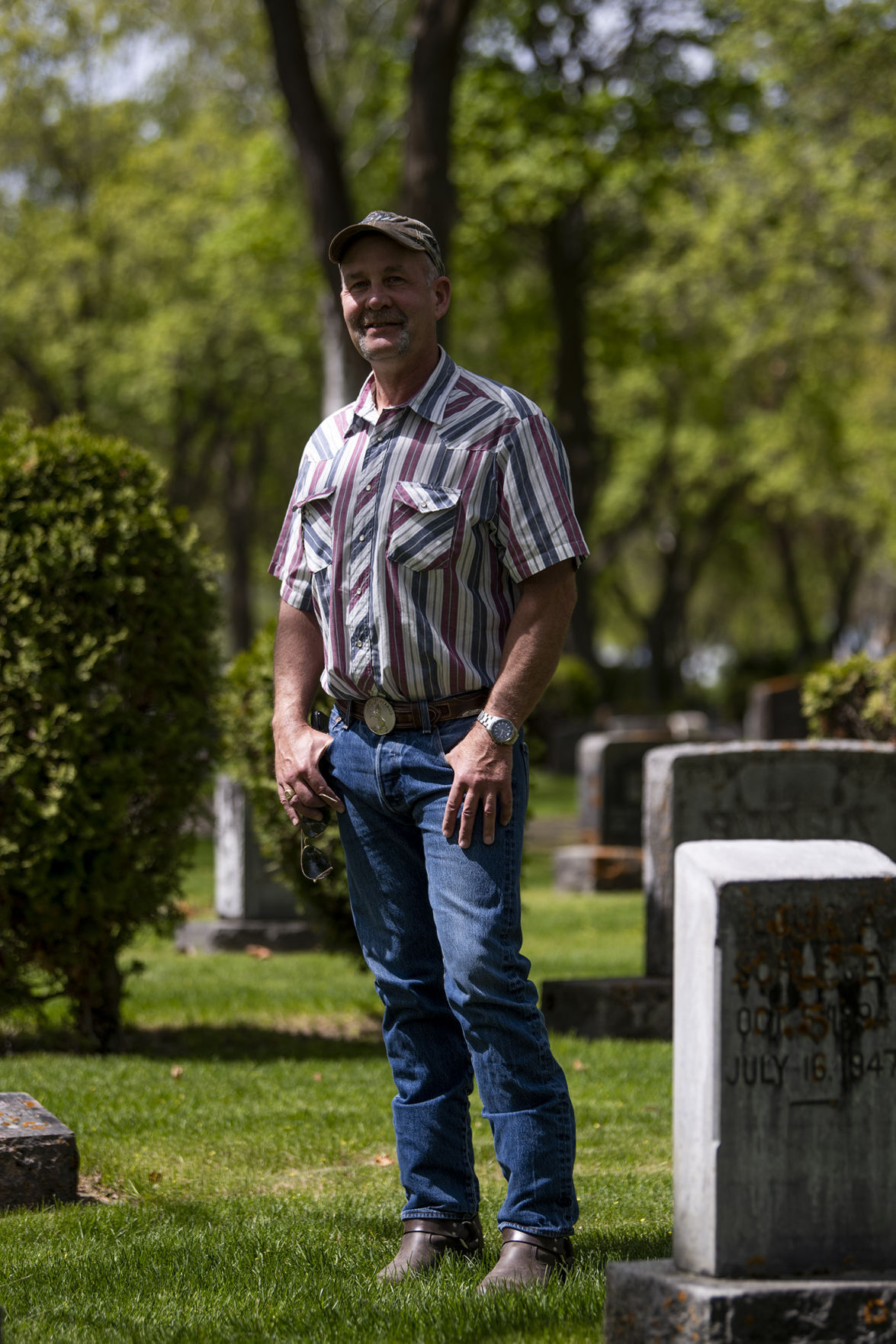 Brian Hensel, interim city cemetery director, stands for a portrait at the cemetery on Wednesday. 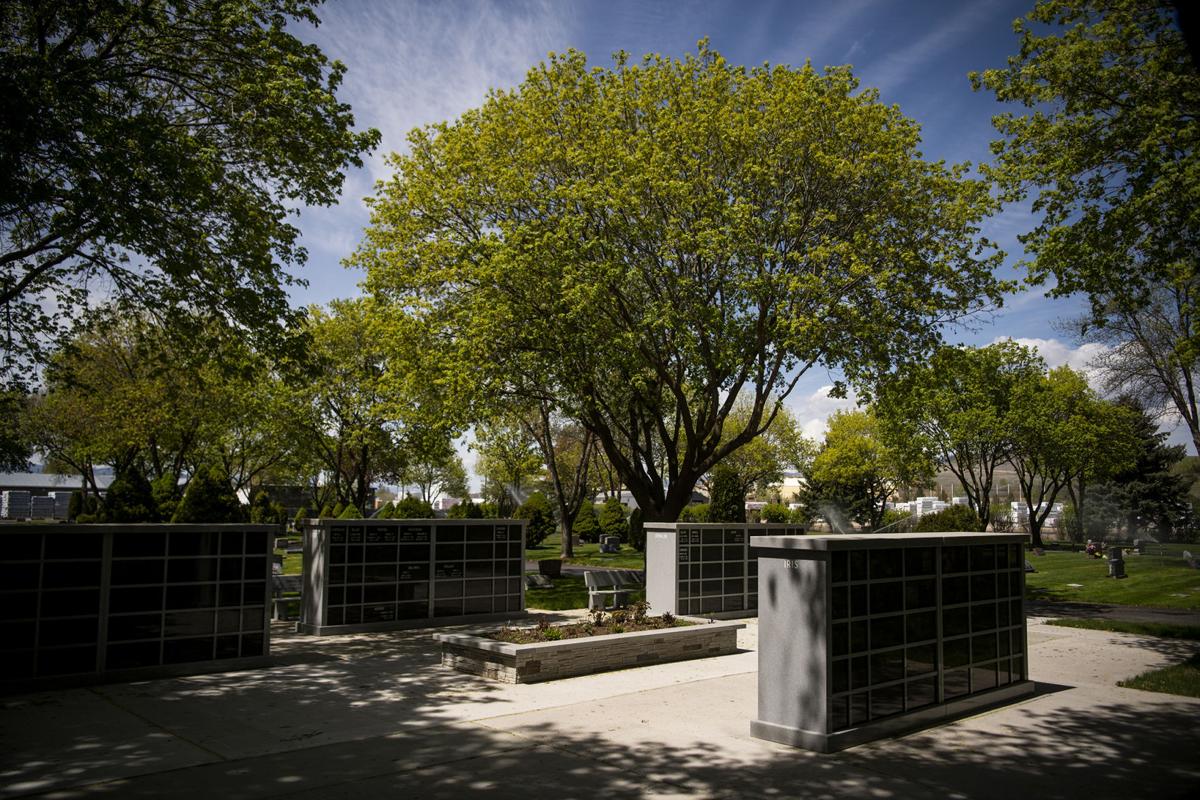 One of two niche wall areas at the Missoula City Cemetery where cremated remains are laid to rest. In March, there were 300 unsold niches. 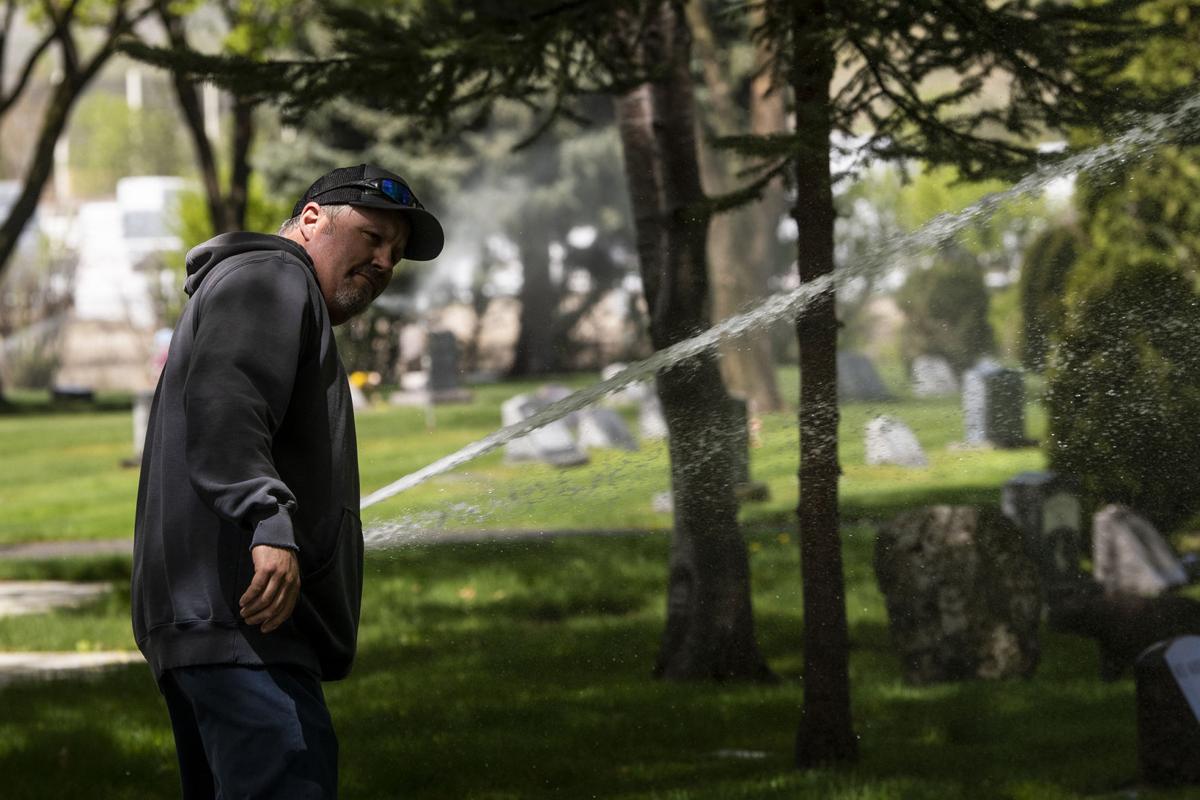 Brett Gilman, a supervisor at the Missoula City Cemetery, adjusts a sprinkler head. Around 50 acres are irrigated at the site.

On a stroll through the Missoula City Cemetery Wednesday afternoon, the history was all around as mowers hummed and birds chirped. Names that now decorate street signs and buildings throughout Missoula dot the gravestones.

Cemetery staff were in the process this week of putting the finishing touches on a new self-guided bike tour that will take place on May 15 and May 16 from 8 a.m. to dusk.

The tour tells the stories of historic figures from Missoula's past and features names like Thomas Greenough, Christopher Higgins and Frank Worden, to name a few. Several graves throughout the cemetery feature plaques providing a brief history of the person interred at the plot.

The tour is part of a larger effort to make the cemetery, one of Missoula's oldest green spaces, more accessible and versatile, said supervisor Brett Gilman.

"We're looking into promoting the cemetery as more than a cemetery," Gilman said. "It's a green space as well — people come out to walk, jog, bike. We started doing a bit more outreach, though COVID did put a damper on that."

Burials are waning in popularity, something a strategic plan for the cemetery presented to city council in early March touched on. Around 75% of Montanans now opt for cremation over burial, according to data in the plan.

Changing with the times, cremation niches, which are memorial walls where ashes are stored, have become far more popular. The Missoula cemetery has two of them.

"If that trend continues, that more people want to be cremated and take advantage of the niche walls, it may be more than two," said Brett Hensel, the interim cemetery superintendent. "They're a very efficient use of space."

Recent changes to city ordinance will also allow the cemetery to explore the addition of a pet ossuary, which is a place where cremated pet remains can be laid to rest and an engraving can be added to a wall, much like the niches.

In March, the cemetery had around 7,000 unsold graves and just over 300 unsold niches. Sales on those plots have averaged out to around 35.4 graves and 19.6 niches per year.

Outside of decreasing sales, there are other challenges the cemetery faces. A new irrigation system is needed and there has been talks about upgrading the property's fencing.

Long-term ideas suggested in the strategic plan also include a new multi-use building, as well as changes with the chapel, which is small and hard to heat.

The cemetery has five members on the maintenance staff, as well as administrative assistant, Carissa Culp.

Mowing the property is a three-day process and trimming around the graves is an endeavor in and of itself, as it now holds over 21,000 interments and memorials, Gilman said.

He and his staff sometimes walk nine to 11 miles each on days where they are trimming around the trees and memorials.

Telling the cemetery's history is a big part of her job, Culp said, and as a side project she's worked with GIS (geographic information system) software to help mark graves and make information on the people buried there accessible.

They're still working through the process, but she said staff feels it will turn out to be an interesting addition to the cemetery that helps Missoulians further explore the history of the city.

"There's a lot out there that you don't know until you start looking," Culp said. "I think it's rare to find this much history in one spot. So I think going through all these records and seeing all that — we want to be able to share that with people."

Other events at the cemetery, such as the Stories and Stones tour, where volunteers dress up as historical figures, have been a popular way for Missoula to connect to its history. The event was canceled last year due to COVID, but staff are hopeful it can happen in November.

"(We'd like to have) more visitors than those who are out here visiting their deceased loved ones," Gilman said. "We'd like it to be more than that, for them to have an understanding and appreciation for the history, and for the folks interred here, what they did."

This week, the Pfizer vaccine was approved for the 12 to 15 age group by both the Food and Drug Administration and the Centers for Disease Control and Prevention.

State law requires that developers opting to subdivide land set aside a certain percentage of the property for parks or pay money in the equal value of the land to be used by city governments for greenspace.

On Monday morning, the Missoula City-County Health Department announced 60% of the county population had received at least a first-dose of the COVID-19 vaccine.

Goble comes from a nursing and nonprofit background and a release from the organization said she has "a life-long passion for women and children’s mental and physical health."

When Missoula fourth grader Athena Starin got off the bus following school last Friday afternoon, she was in for a big surprise.

The proposed facility will be constructed with wood products grown, harvested and manufactured in Montana.

Operated by the Poverello Center, the Johnson Street shelter served 509 different people between the time it opened in November 2020 to its closing on April 30.

The new members to the Affordable Housing Citizen Oversight Committee are  meant to bring community input to one of the Garden City's most pressing issues.

On Wednesday, the Missoula City-County Health Department is partnering with Imagine Nation Brewing Company to hold a "Vaccine Fiesta" from 5 to 8 p.m.

The annexation of a new section of the Invermere subdivision in the Miller Creek area will add 19 lots between 10,000 and 20,000 square feet to Missoula.

West Broadway Island, an area that has long been utilized by unsheltered people as a camping area, will be closed for six weeks starting on May 27 for environmental restoration and cleanup.

Running out of Ward 1, Sheena Winterer feels she would bring a collaborative spirit and housing experience to Missoula City Council.

Water rains down from a sprinkler stream on a statue at the Missoula City Cemetery on Wednesday afternoon. Staff are making a push to market the cemetery as more than just a place where the dead are buried.

A maintenance worker mows the lawn at the Missoula City Cemetery on Wednesday. Staff are putting the finishing touches on a self-guided bike tour open to the public on May 15 and May 16.

Brian Hensel, interim city cemetery director, stands for a portrait at the cemetery on Wednesday.

One of two niche wall areas at the Missoula City Cemetery where cremated remains are laid to rest. In March, there were 300 unsold niches.

Brett Gilman, a supervisor at the Missoula City Cemetery, adjusts a sprinkler head. Around 50 acres are irrigated at the site.