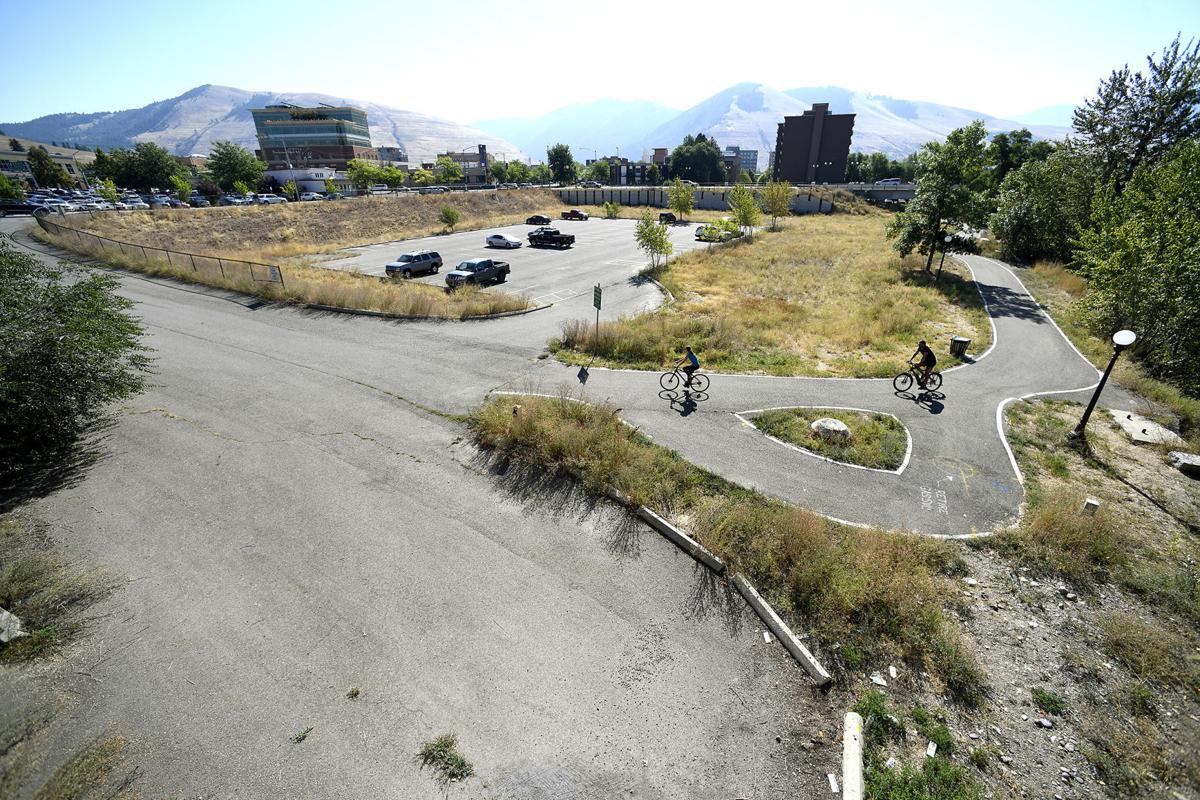 The Riverfront Triangle at the corner of Orange and West Front streets in Missoula has sat nearly empty for 30 years. 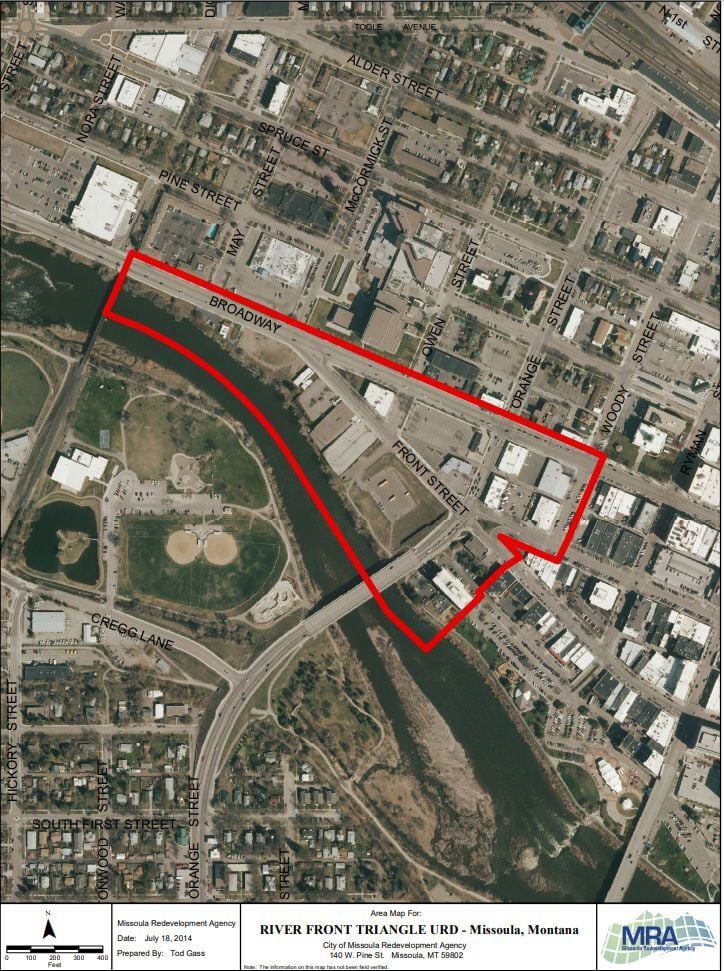 An enormous $100 million development project in downtown Missoula, which was canceled because of the onset of the pandemic and economic turmoil last year, may soon be revived.

Dale Bickell, the city’s chief administrative officer, made the announcement during a presentation on tax increment financing reforms he gave to a city council committee on Wednesday.

He was showing the city council members how much more property tax would be generated if the Riverfront Triangle, which sits on the southwest corner of Orange and Broadway streets next to the river, were to be redeveloped.

The site, which is comprised of a city-owned parcel and a privately owned parcel, has been an empty parking lot for over three decades. Local developers Nick and Robin Checota had announced plans for a $100 million civic events center with an attached hotel, restaurants, condominiums, a public plaza, a spa and a parking garage. However, in April of 2020 they dropped their plans, saying the pandemic had drastically altered the entertainment industry.

Bickell didn’t name any developers interested in the site on Wednesday, but he told the council that there’s renewed interest in the prime piece of property. He called it one of the “high priority projects” for both the city and private developers.

“There is a high level of development interest here,” he said. “While that project stopped because of the pandemic, there has been a lot of talk about it. We are actually confident that that is going to move forward in some iteration in the short term.”

Bickell told the council that if the Riverfront Triangle project is developed along with a planned housing project on Scott Street, the city would gain an additional $177 million in taxable value from those two projects alone. The Riverfront Triangle project would generate an estimated $2.2 million in new property taxes every year, and the Scott Street project would generate over $500,000 more in new property taxes annually.

The Riverfront Triangle is an urban renewal district, which means developers are eligible for reimbursement for a portion of eligible costs in the form of tax increment financing.

Ellen Buchanan, the director of the Missoula Redevelopment Agency, said the city would probably have to commit somewhere in the neighborhood of $16 million in tax increment financing to attract a development on par with what the Checotas had been planning. The investment would be paid back over time by the property taxes generated by the new development. So, the city’s general fund and school districts would not see a big increase in property tax revenue until the financing is paid off.

“Basically what this project does, if we are successful in attracting a private developer, is it consumes basically all of the revenues it generates for the length of the debt service,” she said.

Gwen Jones, the chair of the city council’s administration and finance committee, said the city has to balance the dual needs of trying to get a project that’s big enough to be "transformational" while also not allowing the property to sit vacant for another decade.

“For over three decades we have had this dormant asset sitting in our downtown that could be an anchor basically for the west side of our downtown,” she said. “And we’ve basically had no income coming in from that in terms of property taxes. But if it gets built … we have this powerhouse of economic activity in that part of town.”

She also cautioned that the city would not see property tax revenue for many years.

“But eventually we will,” she said. “If it had been built decades ago, we would be seeing that money now. So time is money, and at some point we need to get going on this.”

Council member Jesse Ramos tried to clarify why development hasn’t happened on the site for so long.

“Is it fair to say a lot of the reason development hasn’t happened there is because the city owns a key chunk and hasn’t wanted to sell it unless certain parameters are met?” he asked Jones. “And if the city had sold it, there’s a good chance some sort of development might have happened there, but maybe not a giant conference center there?”

Jones responded by saying that she sat for years on the working group that looked at possibilities for the site.

“We had a strong feeling that we had a fiduciary duty to use it as wisely as possible to have a transformational project there,” Jones said. “There could have been other things built there over the years that would have been far more minimal in my opinion.”

A 2012 study commissioned by Mayor John Engen found that a 30,000-square-foot conference center in Missoula could generate $16 million in new economic output for the city from out-of-market spending. The Drift would have been 60,000 square feet and would have hosted many more events than just conferences.

Farran Realty Partners, a local development company, owns land around the city-owned property at the Riverfront Triangle. Checota could not be reached for comment by press time Wednesday.

Jones reiterated to her fellow city council members that she hopes they carefully consider what it means to have a publicly owned lot in such a prime location.

“That’s a super-heavy lift that has incredible potential and impact on our community,” she said.

"Developers and investors here in Missoula and the across the region and across the country are quite bullish on Missoula," said a local economic development official.

BREAKING: Nick and Robin Checota have announced that "the financial impact of COVID-19 on Logjam" has caused them to be unable to continue with the massive downtown events center, hotel and restaurants.

Before the pandemic hit Montana, Missoula recorded a high level of construction activity in the first quarter of 2020.

The privately owned portions of the project, including the hotel/condo tower, are not getting any Tax Increment Financing from the city and will be completely privately financed.

A 2015 study found a conversion to two-way traffic would increase safety for bikers and pedestrians while increasing economic activity at local shops.

"I’m just very worried about the members of my community being able to survive especially here in Missoula where the cost of living has gone up so dramatically recently," said one dancer.

The Riverfront Triangle at the corner of Orange and West Front streets in Missoula has sat nearly empty for 30 years.