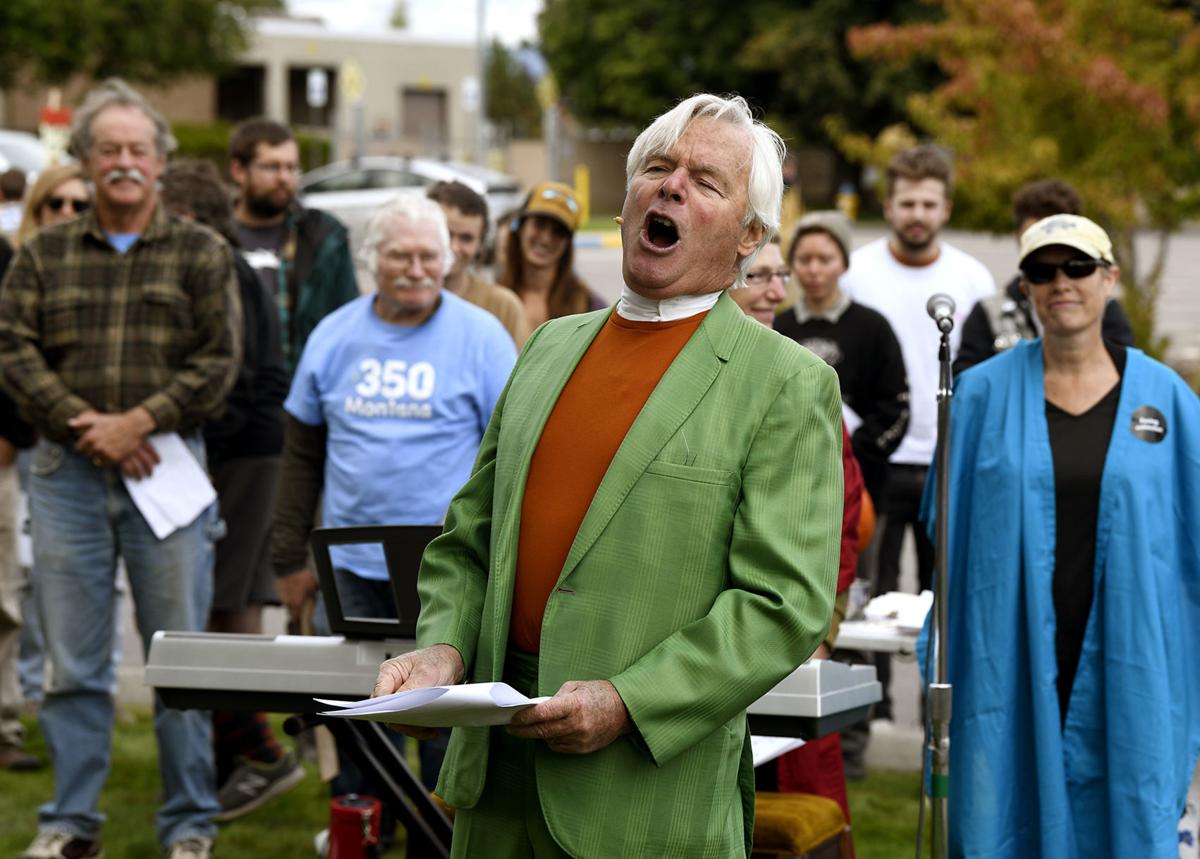 Missoula artist Craig Menteer addresses a crowd of protesters as The Reverend Kenyon during a Global Climate Strike rally at NorthWestern Energy's office on Friday. Organizers of the rally said NorthWestern Energy is not aiming to lower its carbon emissions according to its recently released 20-year plan. 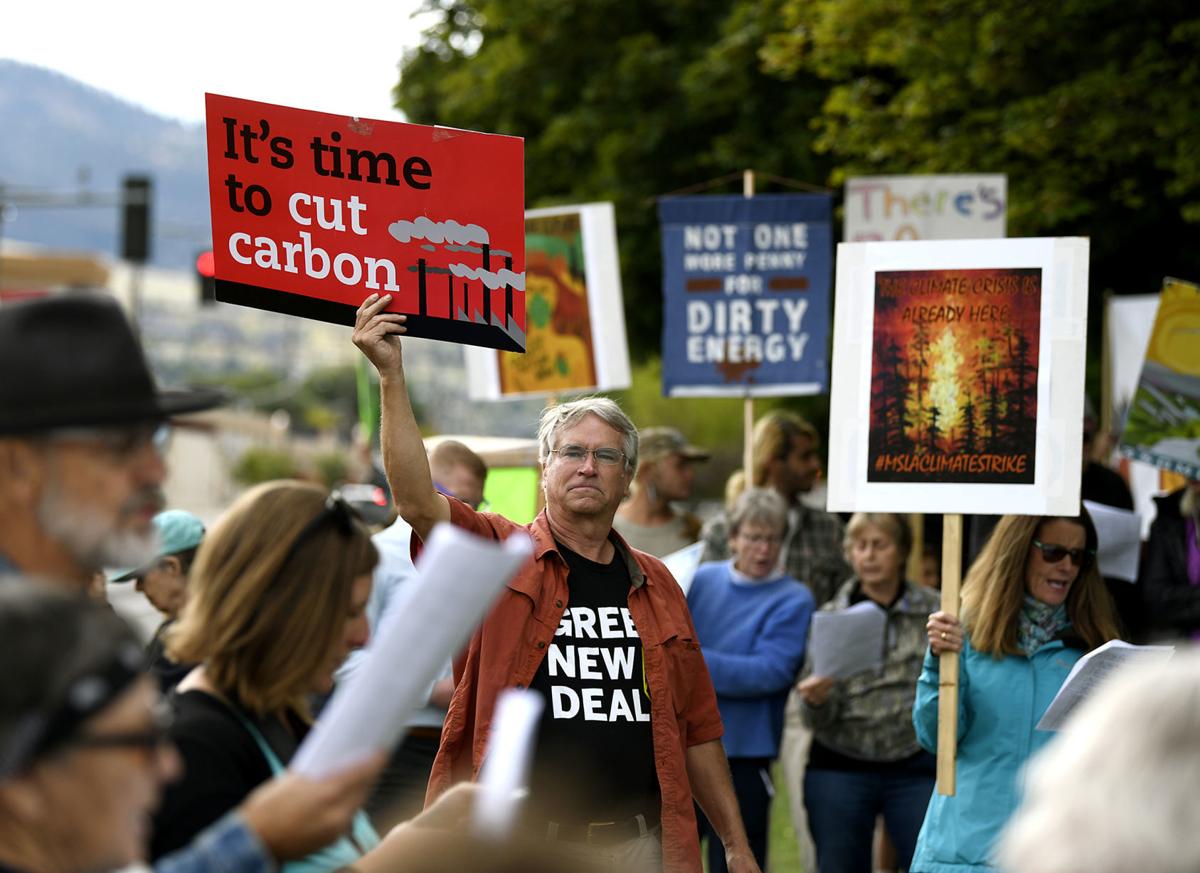 More than 100 people showed up at NorthWestern Energy's office in Missoula for the protest. The rally was one of several events coinciding with the Global Climate Strike on Friday. 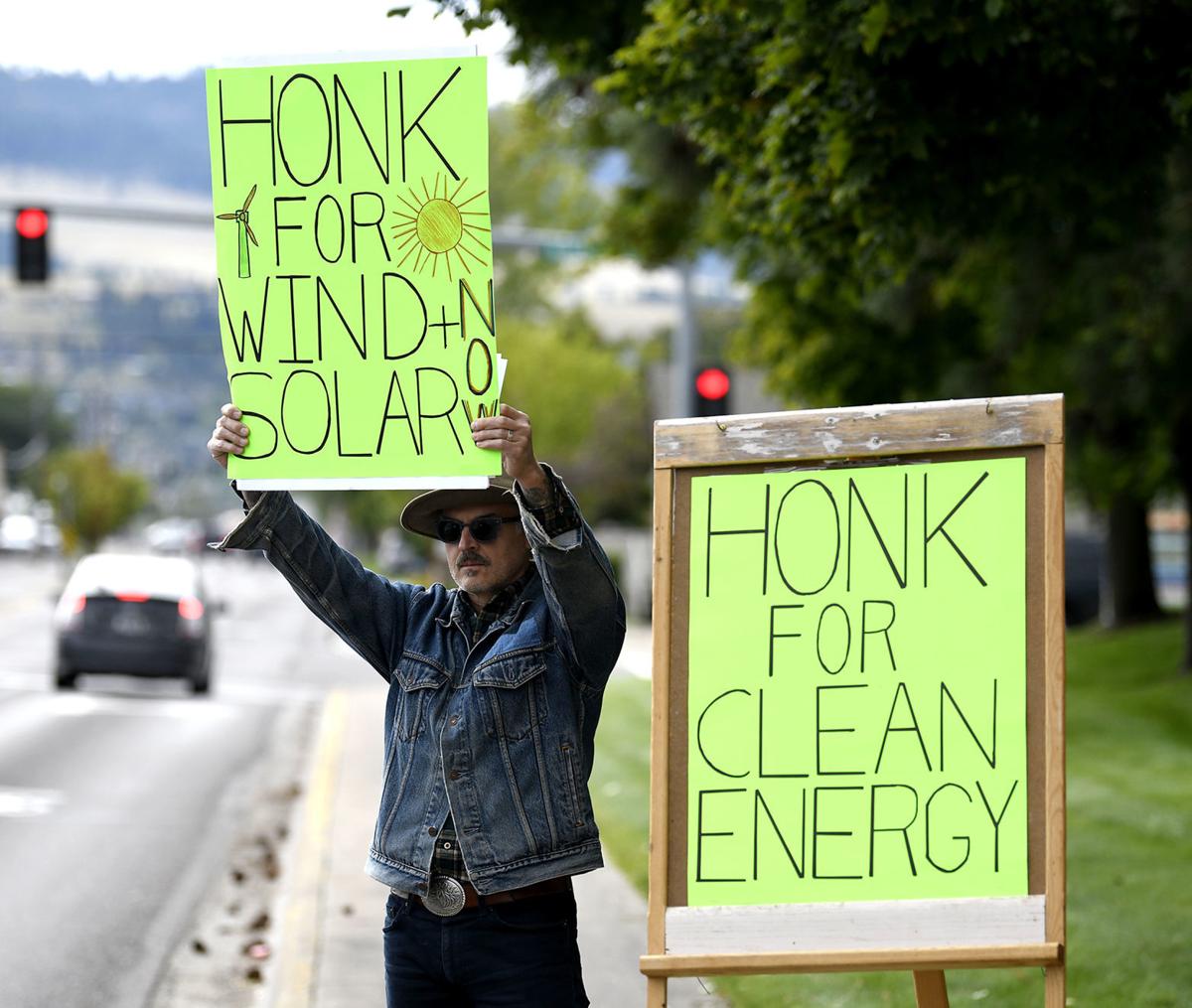 Francisco Crespo holds a sign on Russell Street outside NorthWestern Energy's office in Missoula on Friday.

More than 100 people gathered around noon to sing climate-tinged adaptations of Bob Dylan songs and the Pledge of Allegiance, which became the Pledge of Alliance. The protest was organized by 350 Montana, the local chapter of the international climate change-focused nonprofit.

The Global Climate Strike, which started as a student-led day of action, in part inspired by teenage Swedish climate activist Greta Thunberg, was expected to be one of the largest worldwide protests in history. The ralliers are calling on governments and private corporations to take immediate action to slow the human-caused effects of climate change and move away from fossil fuel consumption.

With Bruce Bender on acoustic guitar and various other protesters banging on pots and pans, the crowd sang through a rendition of “The Climate, It Is a-Changin’” before 350 Montana co-chair Jeff Smith spoke about NorthWestern Energy.

Smith said that the rally targeted NorthWestern because in its recently released 20-year plan, the utility said it would not aim to lower its carbon emissions. He said power utilities in neighboring states were doing more, including some power companies committing to be carbon-neutral by 2035 in Colorado and Idaho.

“Their 20-year plan is an abomination,” Smith said, “They are supposed to be very specific about where they will get their energy. It is very vague and data-depleted. Compare it to plans from other western states, where they have direct comparisons between the cost and impact of natural gas versus solar and wind.”

Smith did point out that NorthWestern had made some strides, with about 50% of current energy levels coming from renewable sources, though much of that was from dams, which have their own environmental issues.

NorthWestern Energy noted 62% of its energy comes from renewable sources.

Smith said he and some other 350 Montana members bought a few shares of NorthWestern stock so they could attend the annual shareholders meeting. He said they were the only ones to question anything about how Northwestern operated. He said he had hoped with the coal plants in Colstrip becoming less viable, NorthWestern would work to move away from them, but instead he said, it seemed they were doubling down on keeping the plants open.

Local performance artist Craig Menteer led the crowd in the character of Reverend Kenyon, pastor of The House of Species Diversity and Wildlife Respect. He led the crowd in the Pledge of Alliance, in which he urged people to act in step with all other species, rather than just for personal gain.

"I'm an artist and wanted to be more of an activist," Menteer said. "Comedy is good, and humor has a way of driving points home. And we need some comic relief, and to be able to take what we’re doing seriously, we need to be able to laugh about it, too."

He said he was inspired by New York City performance artist Reverend Billy and the Church of Stop Shopping, who predicts the end of the world through unhinged consumption and unchecked capitalism.

As Smith and Menteer led the crowd in chants of “Why, NorthWestern, why?” passing cars showed support with honking horns, although some larger diesel pickups revved up as they passed, spewing dark black smoke on the roadside protesters.

The Global Climate Strike is a weeklong event, ending next Friday, when 350 Montana is planning a trip to NorthWestern Energy's corporate headquarters in Butte.

“As for why they are reluctant to change, that’s a question for Northwestern executives to answer,” Smith said. “I think they are being rewarded for sticking to what they know. But if they’re reluctant to innovate, we’ll be the ones paying the costs.”

This story has been updated to include the percent of energy Northwestern Energy counts from renewable sources. It is 62%.

A Walk Through Time exhibit at University of Montana

From educating consumers about solar power to providing air filters to kids and the elderly, Amy Cilimburg and her tiny nonprofit are focused …

Man killed by Missoula officers refused to give up gun

The man killed in an officer-involved shooting earlier this month in Missoula had refused to give up his firearm when police responded to his recreational vehicle for drug activity, new court filings show.

Maybe it's the narrow road winding through the hills up to the secluded property, or maybe it's the way the morning air smells in between the …

University of Montana student fasts in support of climate strikers

Michael “Mj” Desrosier says he’s only one person, but he wants to do his part to support the global climate strike week.

Missoula artist Craig Menteer addresses a crowd of protesters as The Reverend Kenyon during a Global Climate Strike rally at NorthWestern Energy's office on Friday. Organizers of the rally said NorthWestern Energy is not aiming to lower its carbon emissions according to its recently released 20-year plan.

More than 100 people showed up at NorthWestern Energy's office in Missoula for the protest. The rally was one of several events coinciding with the Global Climate Strike on Friday.

Francisco Crespo holds a sign on Russell Street outside NorthWestern Energy's office in Missoula on Friday.