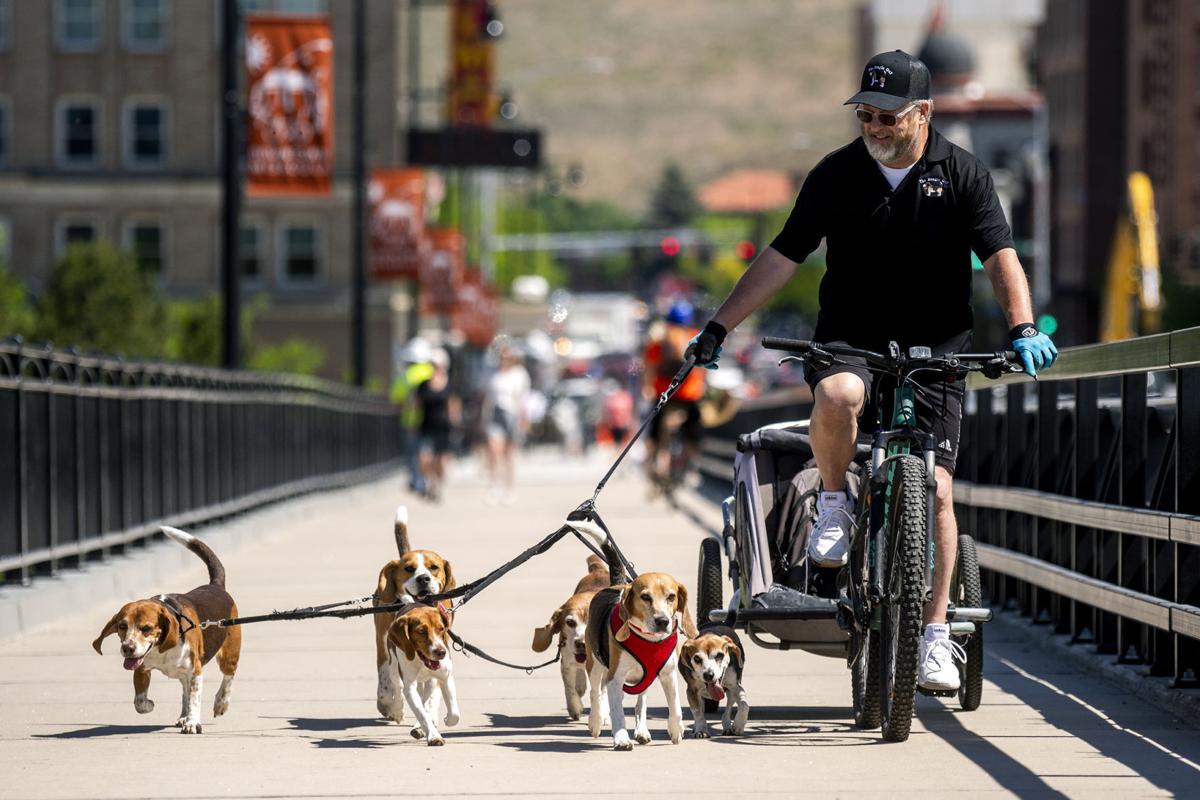 Greg Mergethaler, locally known as "the beagle guy," rides across the Beartracks Bridge alongside his six dogs on Tuesday. 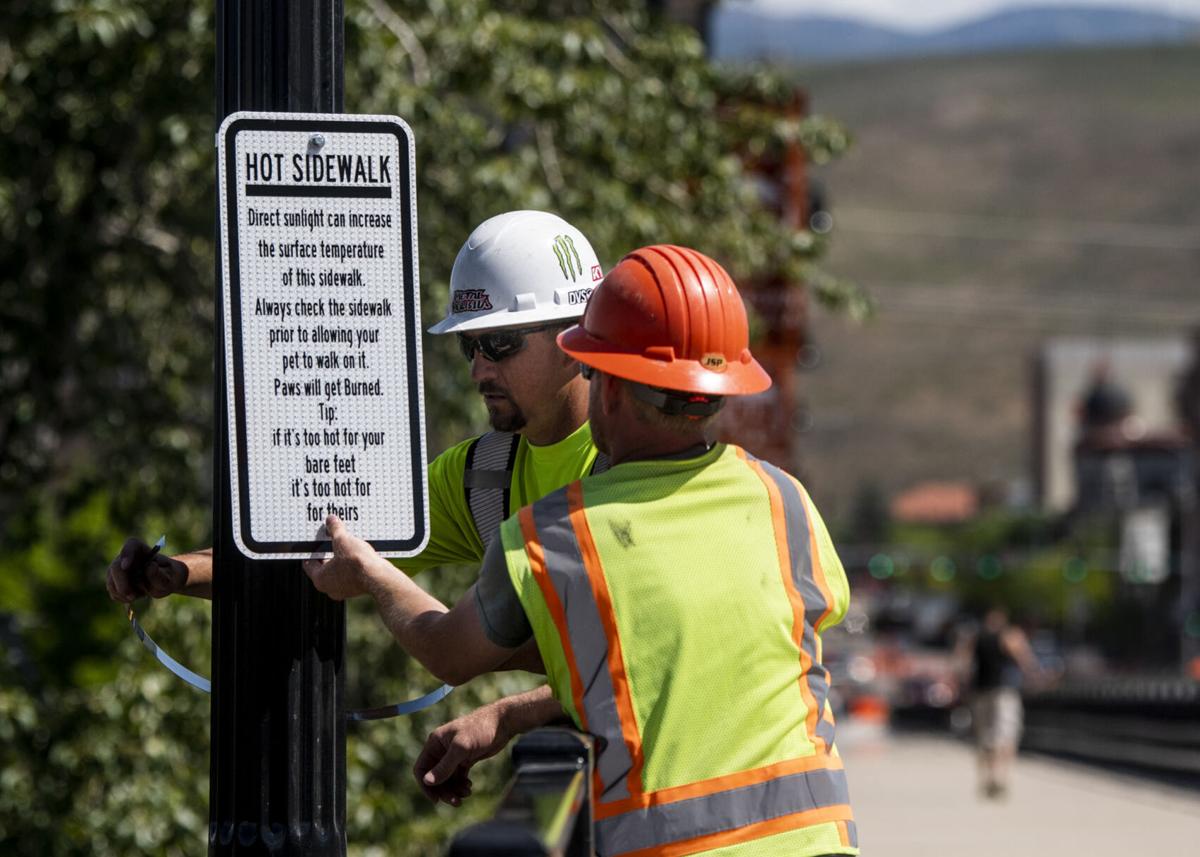 The surface of the newly constructed pedestrian and bike path on the Beartracks Bridge in downtown Missoula gets alarmingly hot in the sun and could burn the feet of dogs and humans, according to the Montana Department of Transportation.

On a recent day when the air temperature soared above 90 degrees Fahrenheit, a civil engineering specialist used an infrared thermometer and measured a 147-degree surface temperature on the path, while a nearby concrete sidewalk was only at 106 degrees.

Workers with the department installed warning signs Tuesday on the bridge, which spans the Clark Fork River and connects the north and south portions of Higgins Avenue.

“Direct sunlight can increase the surface temperature of this sidewalk,” the signs read. “Always check the sidewalk prior to allowing your pet to walk on it. Paws will get burned. Tip: if it’s too hot for your bare feet it’s too hot for theirs.”

The new, wider pedestrian and bike path is made of fiber-reinforced polymer deck panels instead of concrete because it’s lighter and can be extended out farther without adding extra structural supports.

Two weeks ago on a fairly sunny day, Missoula resident Greg Mergenthaler was walking his six beagles across the bridge as he rode a bike alongside. He is known locally as “the beagle guy” and rides six to eight miles every day in town with his dogs.

“We got halfway across the bridge and I noticed the new little one was faltering,” Mergenthaler recalled. "And I didn’t know what her problem was so I stopped the bike. And as soon as I stopped, I noticed they all started faltering in the same manner, which was like pre-seizure activity."

"And I knew that wasn’t right so I took off my gloves and felt the panels. They were very hot," he said.

Mergenthaler “got emotional” and started running to get his dogs to the concrete on the south side of the bridge where they could cool off, he said. He dumped water out to cool his pets’ paws and then notified a worker on the bridge about the problem.

“And he was somewhat disbelieving of what I was trying to tell him and I was emotional and wound up," Mergenthaler explained. "And as we talked he realized how passionate I was, and we walked out onto the deck here and he got down to feel it and he got this mortified look on his face. And he pulled his hand off very quickly. And he realized I was telling him the truth.”

Mergenthaler started warning other dog owners to carry their dogs across portions of the bridge that aren’t concrete, he said. It appears that the state transportation department agrees with him that the span is dangerous for paws and bare feet now.

Luke Francis, a civil engineering specialist with the department, was out on the deck on Tuesday helping to install the warning signs. He was the one who recorded the 147-degree reading at 3:26 p.m. on a recent day that got over 90 degrees. A black metal handrail next to the polymer hit 114 degrees that day.

On a different day when air temperatures remained above 80 degrees but below 90, Francis recorded a surface temperature of 145 degrees on the polymer.

The material has been used on bridges all over the world, and Francis has never heard of any municipal government or transportation department reporting problems with it, he said. A Google search for “heat problems fiber-reinforced polymer” and similar search terms turns up research papers about how the material withstands heat, but no news articles about cities having problems.

The panels were made by a company called Creative Composites Group in Dayton, Ohio. A request for comment from the company was not returned as of press time.

“MDT has been made aware of the situation and are working on a solution,” said Kristine Fife of Big Sky Public Relations, the company that handles press inquiries for the state transportation department.

Francis doesn't know what can be done about the problem other than the signs, he said.

“Other than installing a roof over the path, I’m not sure,” he said.

The pedestrian bridge over the south end of Reserve Street in Missoula uses a similar material, but that bridge has a roof over it.

The Beartracks Bridge path with the new material is on the west side of the structure. The pedestrian and walking path on the east side of the bridge, currently under construction, will be built using only concrete, Francis noted.

Mergenthaler is still wary about taking his dogs across the bridge on a hot day, but he’s glad there are at least signs to warn people of the danger.

Revamped half of Higgins Bridge to open in June; events scheduled

At least one new portion of the Higgins Avenue Bridge is set to be complete this summer.

Construction on wider Higgins Bridge deck to begin in 2020

Mountain Line had only two preventable accidents in over 833,900 revenue miles in 2020.

Beartracks Bridge gets paint job to save paws

Pet owners can feel a little better about taking their critters across Beartracks Bridge.

“Our energy bills are pretty significant monthly. This gift of solar panels is going to help reduce that monthly cost so we can more directly care for children in our care.”

Kim Agnew will offer grab-and-go or heat-and-eat meals at her now downtown location, which will also house Pearl Boba Tea and Montana Made Coffee Co.

Office City celebrated its 100-year anniversary in downtown Missoula in 2016.

Details on why the weight 10-ton limit was imposed are scarce, but 16-ton Mountain Line buses will not cross the bridge for the time being.

The weight limit change on Beartracks Bridge will allow Mountain Line buses and school buses to cross the structure.

Greg Mergethaler, locally known as "the beagle guy," rides across the Beartracks Bridge alongside his six dogs on Tuesday.