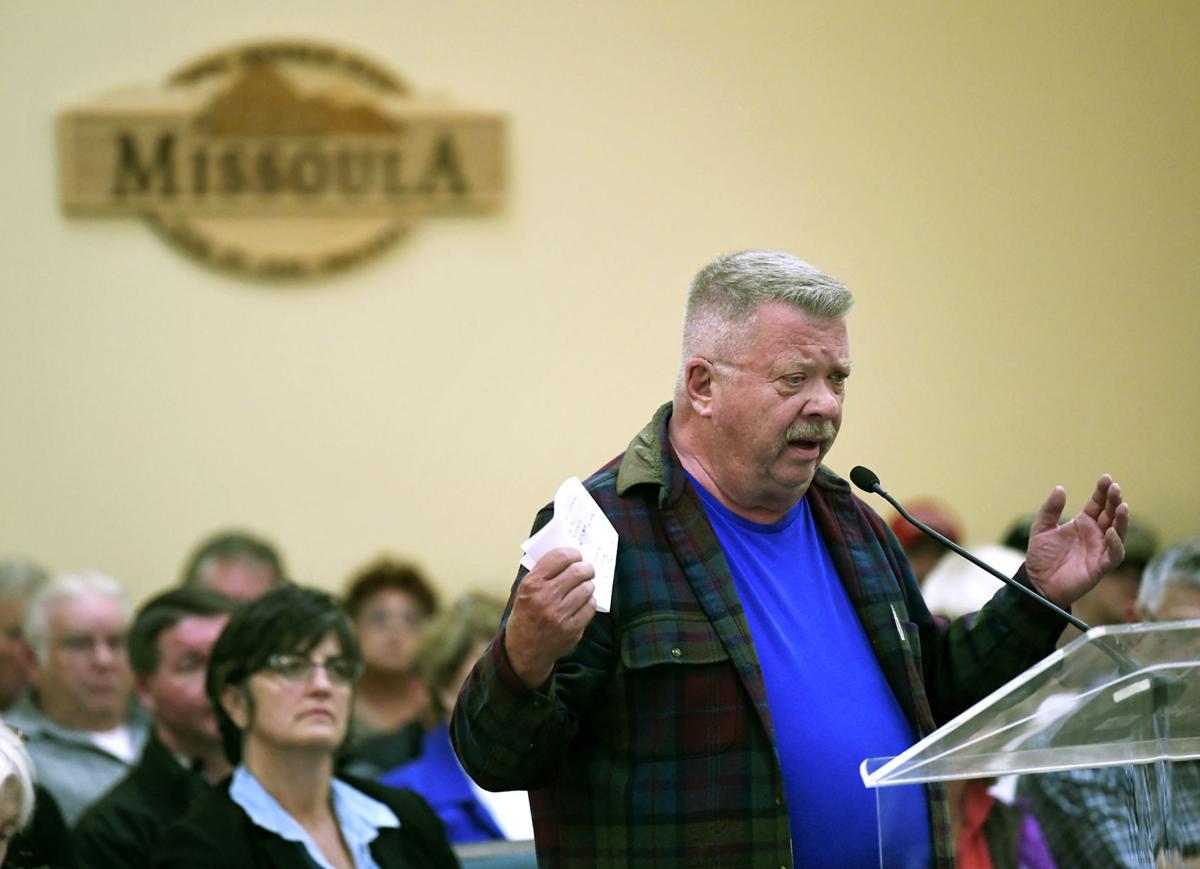 Missoula resident Bill Murray comments on the City of Missoula's proposed budget and tax increase on Monday during the City Council's meeting. Murray said he's been retired since 2013 and that he and his wife, who is also retired, don't get increases in their income to keep up with increasing tax bills. 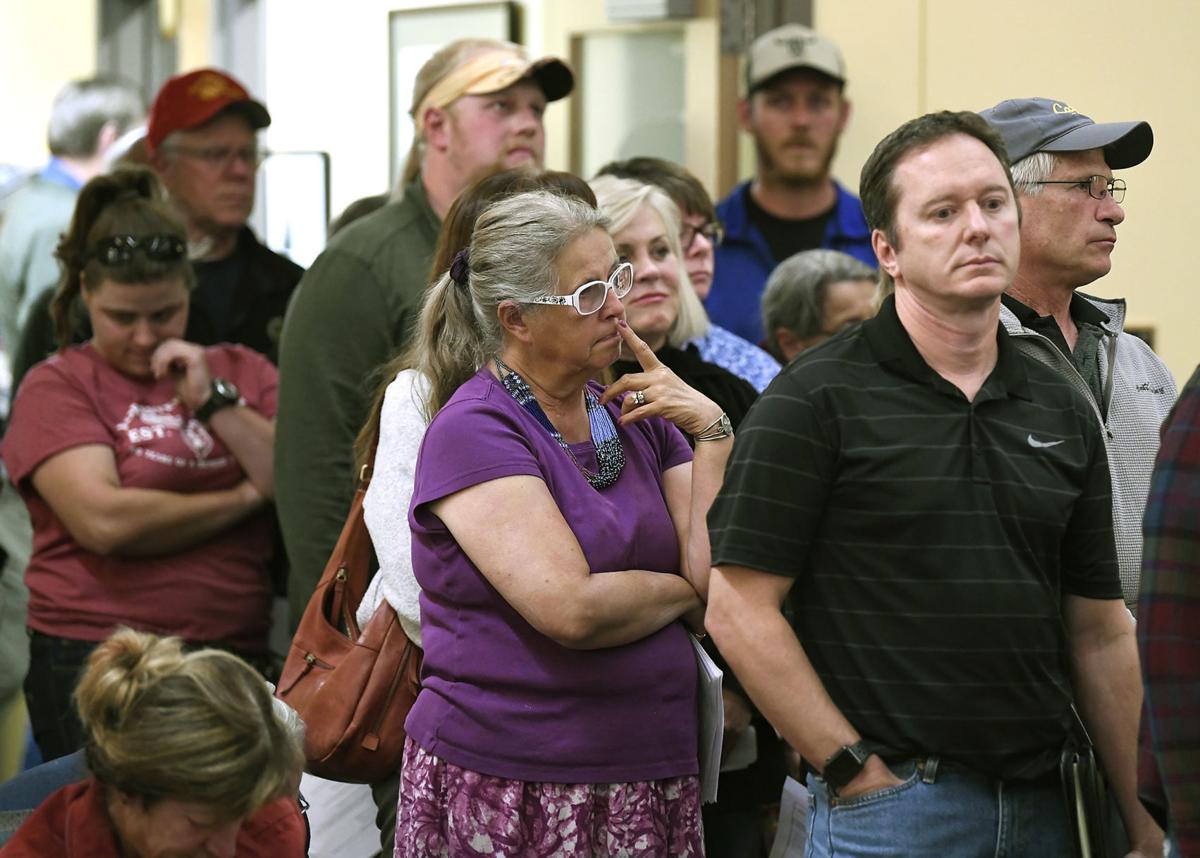 Missoula residents line up to comment on the city's proposed tax increase on Monday. Many spoke about people on fixed incomes having difficulty keeping up with property tax increases. 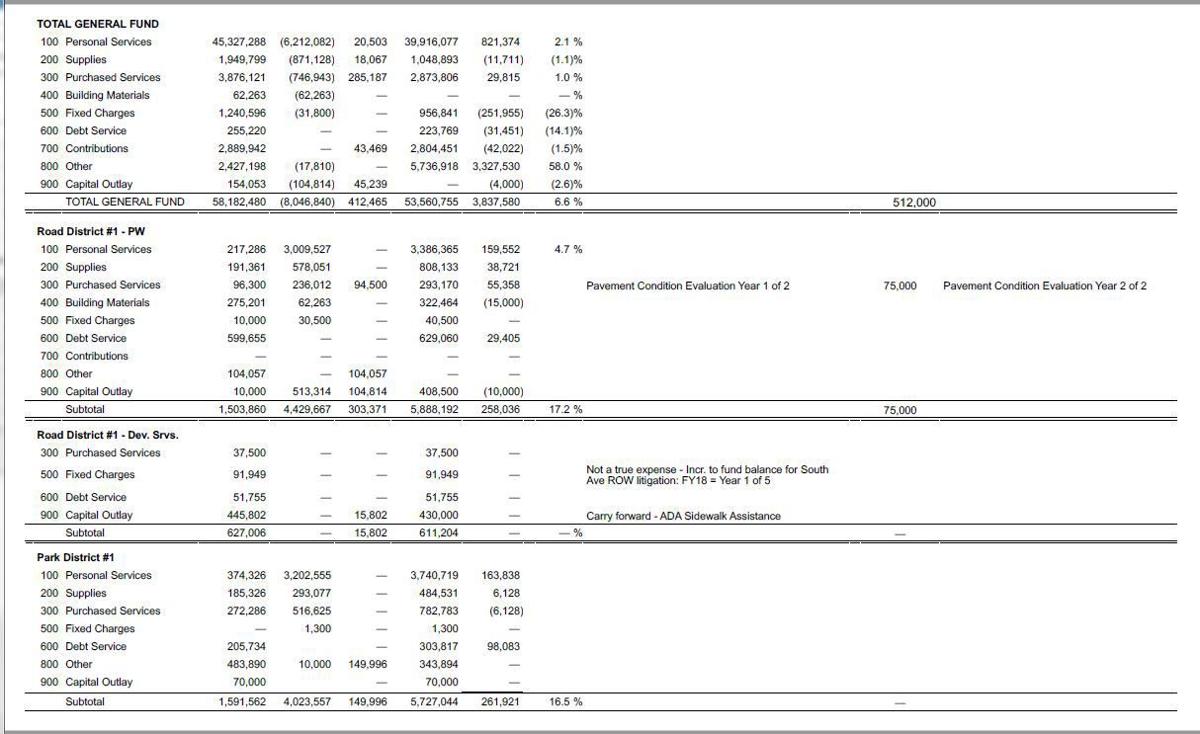 Missoula resident Bill Murray comments on the City of Missoula's proposed budget and tax increase on Monday during the City Council's meeting. Murray said he's been retired since 2013 and that he and his wife, who is also retired, don't get increases in their income to keep up with increasing tax bills.

Missoula residents line up to comment on the city's proposed tax increase on Monday. Many spoke about people on fixed incomes having difficulty keeping up with property tax increases.

It was a taxing meeting by anyone's definition.

But after seven and a half hours, just past 2:30 a.m., with testimony from scores of people, the Missoula City Council passed on a 9-1 vote a budget that was little changed from the one presented near the beginning of Monday night's meeting and that raises property taxes by 3.85 percent. In 2010, a meeting that ended with the council approving an ordinance to protect people from discrimination based on sexual orientation and gender identity — the first in the state – went just short of seven hours.

The City Council did agree to delay a $150,000 paving condition survey in order to pay for one more police officer, in addition to two new officers already in the fiscal year 2019 budget. However, the council, by a 9-1 vote each time, blocked almost 20 budget-cutting amendments totaling about $2 million put forth by council member Jesse Ramos.

Shortly after midnight, Mayor John Engen asked Ramos how many of the same amendments he was going to put forward that already had been debated at a Wednesday morning meeting last week. When Ramos said he planned offering all of them for debate in front of the public for discussion, Engen proposed bundling them for an up or down vote after taking public comments on the amendments as a whole.

That prompted groans and outcry from the 50 or so people left after the midnight hour who insisted upon being allowed to comment on each and every proposal — and did on about the first five amendments.

"We have debated these things before. This isn't the first time the amendments have been brought forward and debated at length," council member Stacie Anderson told the public. "You could have come with us during the budget meeting we held through the course of the summer almost every week."

Ramos countered that new information was being presented at Monday night's hearing, and the council needed to listen to all of its constituents, regardless of when they testified.

"I know people feel like I'm being redundant unless there's new information being presented. The new information is from all of these people that commented," Ramos said. "I'm not asking for the world."

But after a break at 12:45 a.m., Ramos relented and offered the rest of his budget amendments as a package — that was later defeated at a 9-1 vote.

The late night was a foregone conclusion, as by 9 p.m. Monday, a line of people had snaked out the door of the council chambers as people waited to tell tales of friends, neighbors and families being forced out of their homes by ever-increasing taxes. They also questioned the process undertaken this year and asked the council to reconsider the proposed fiscal year 2019 budget increase of 3.85 percent.

The one moment of levity came after Vondene Kopetski announced the Missoula Republican Party was providing pizza for the 150 or so people in the standing-room-only crowd, and a man noted that perhaps they could hold a #pizzaforpotholes social media campaign fundraiser instead of increasing taxes.

But otherwise, the mood was both somber and electrified as the crowd applauded speaker after speaker, both young and old, who told of the personal impacts of previous tax increases from the city, county and schools as well as the city's proposed tax increase, which equates to about $40 on a median-priced home in Missoula of $268,250.

One retiree told how his disposable income rose by 4.9 percent since 2013, while his tax bill went up 29.9 percent.

"I have less than 1 percent per year of a raise and I spend almost 5 percent more each and every year in taxes," he said. "It gets to the point that I can't continue to do that. Try to do what I have to do."

Raney Tschida said that for him, downsizing wasn't an option but a necessity due to the tax burden.

"Having needs is one thing. Having a bloated wish list is quite another," he said. "You need to tighten your fiscal belts."

Both motions failed by a 9-1 vote. However, Ramos and fellow council members Julie Armstrong and Julie Merritt have asked not to be included in the proposed raises, which is something Armstrong said she has previously requested.

Ramos’ proposed cuts last week came on the heels of a new budget process this year that was turned on its head after the value of the mills the city planned to levy to taxpayers actually went down instead of increasing as anticipated.

Engen presented his final proposed budget to the City Council last Wednesday, which includes what is being called a one-time dip into Tax Increment Financing funds from the city's Urban Renewal Districts totaling $750,000.

Council member Anderson noted that initial budget requests from city staff would have created a 13 percent increase, and they knew that wasn't acceptable.

"That's when we showed some leadership, did some creative thinking on what can not be funded and look at where we could make cuts," Anderson said. "That's where we arrived at the 3.85 percent increase. For some people that's a lot of money, for myself included.

"... I appreciate the effort put into this and the discussion. It's not that we don't hear you. We do. But we need to balance all your needs."

Previously, the council noted that while the entire tax bill is increasing, only 29 percent of that is due to the city's budget; the bulk comes from county schools, which anticipate slightly raising, or even lowering taxes this year. The rest are county taxes.

The budget hearing was prefaced by a presentation by Tom Bensen on a four-day visit last June to Neckargemund, Germany, to celebrate the 25th anniversary of its status as a sister city with Missoula. Bensen is the executive director of Arts Missoula, and the city covered the $2,400 cost of the trip for him, which included airfare, train travel, meals and a one-night hotel stay, during the event.

Bensen notes that the sister city program promotes citizen diplomacy, peace and mutual understanding, one citizen at a time.

After only a handful of public comments, Missoula County adopted its Fiscal Year 2019 budget on Thursday.