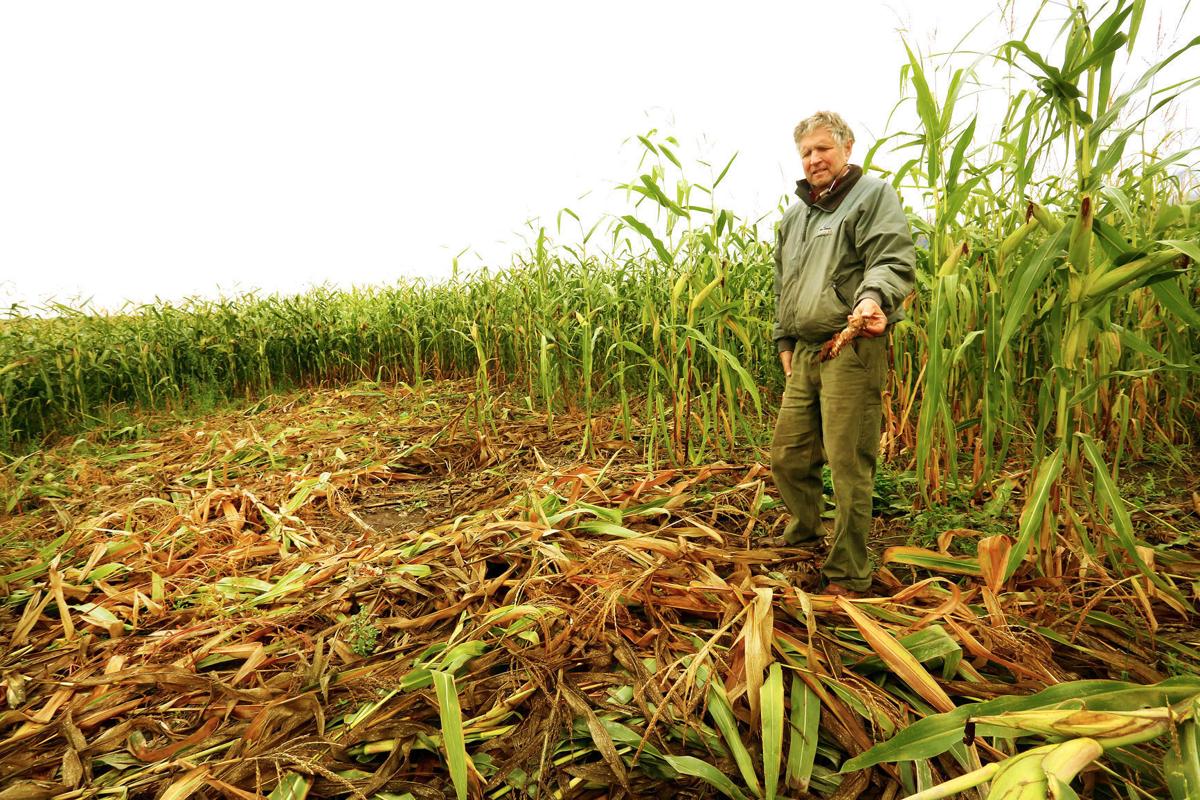 Longtime Mission Valley dairyman Greg Schock stands on the edge of a clearing inside his cornfield that was knocked down by grizzly bears. The corn provides an important source of feed for his dairy herd during the winter months. The organization People and Carnivores helped fund and then installed an electric fence around Schock's cornfield in an attempt to keep grizzly bears away from cornfield. It has been partially successful. Before the fence was installed, close to 15 grizzlies could often be found in the cornfield. On this day, a biologist estimated there were about six. 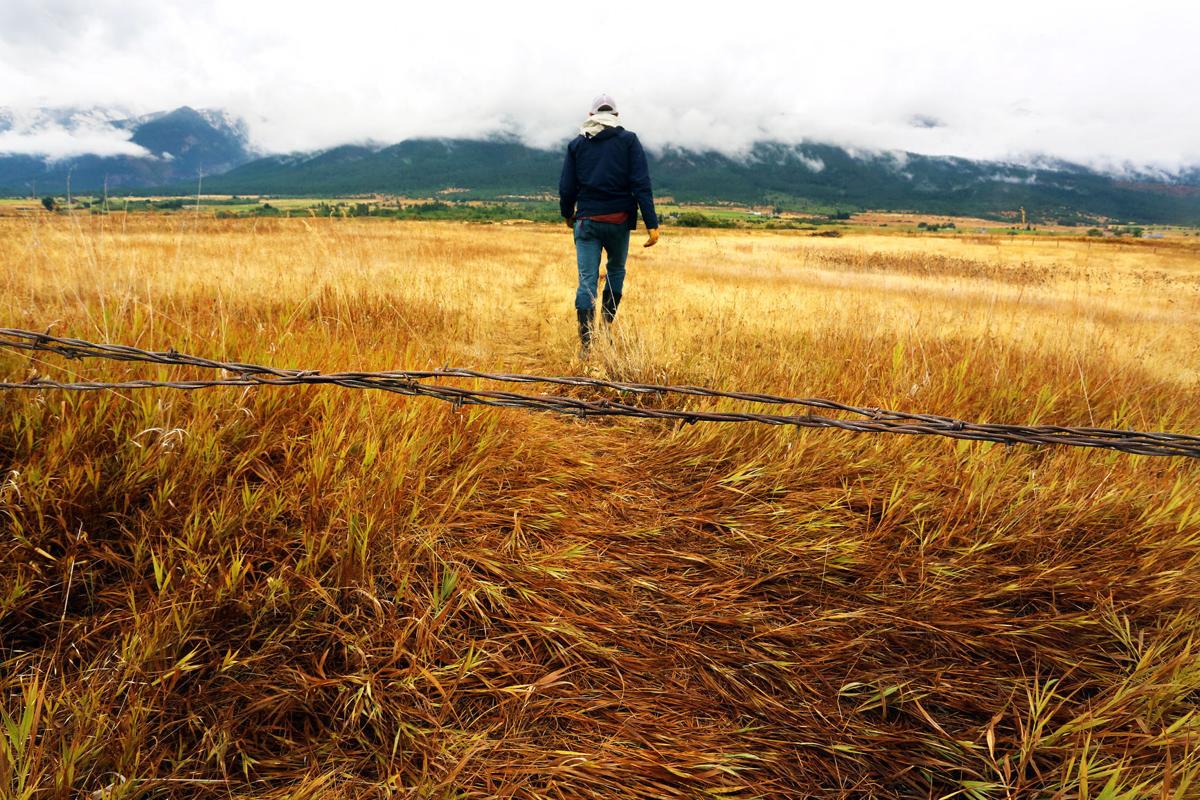 People and Carnivores Northern Field Director Bryce Andrews walks along a trail created by grizzly bears travelling between Millie's Woods and Greg Schock's cornfield north of St. Ignatius. Working with U.S. Fish and Wildlife, the organization People and Carnivores came up with the funding to build an electric fence around Schock's cornfield last year. 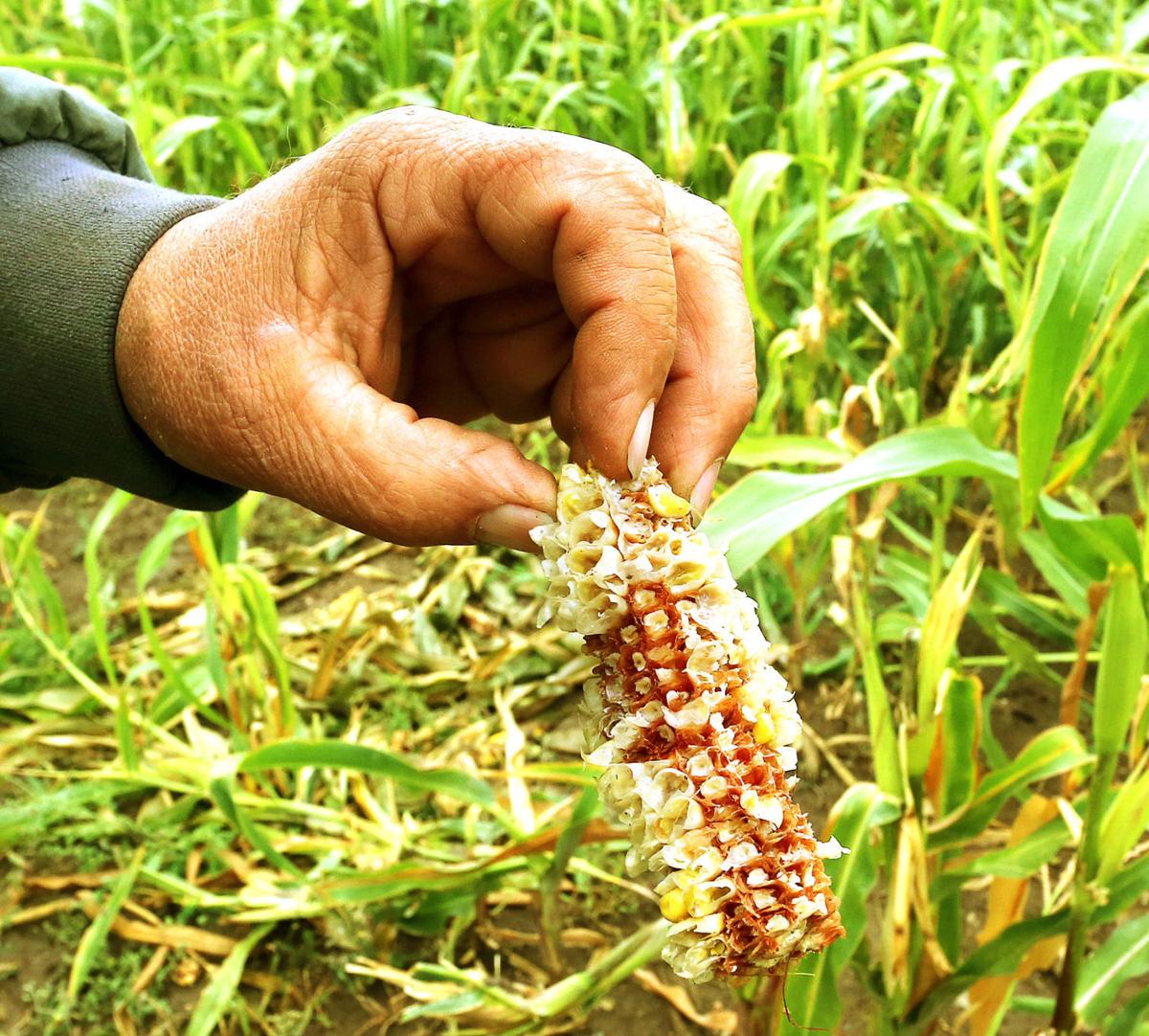 Grizzly bears eat corn in a similar fashion to humans. They remove the husks and eat the kernels while leaving the cob behind. 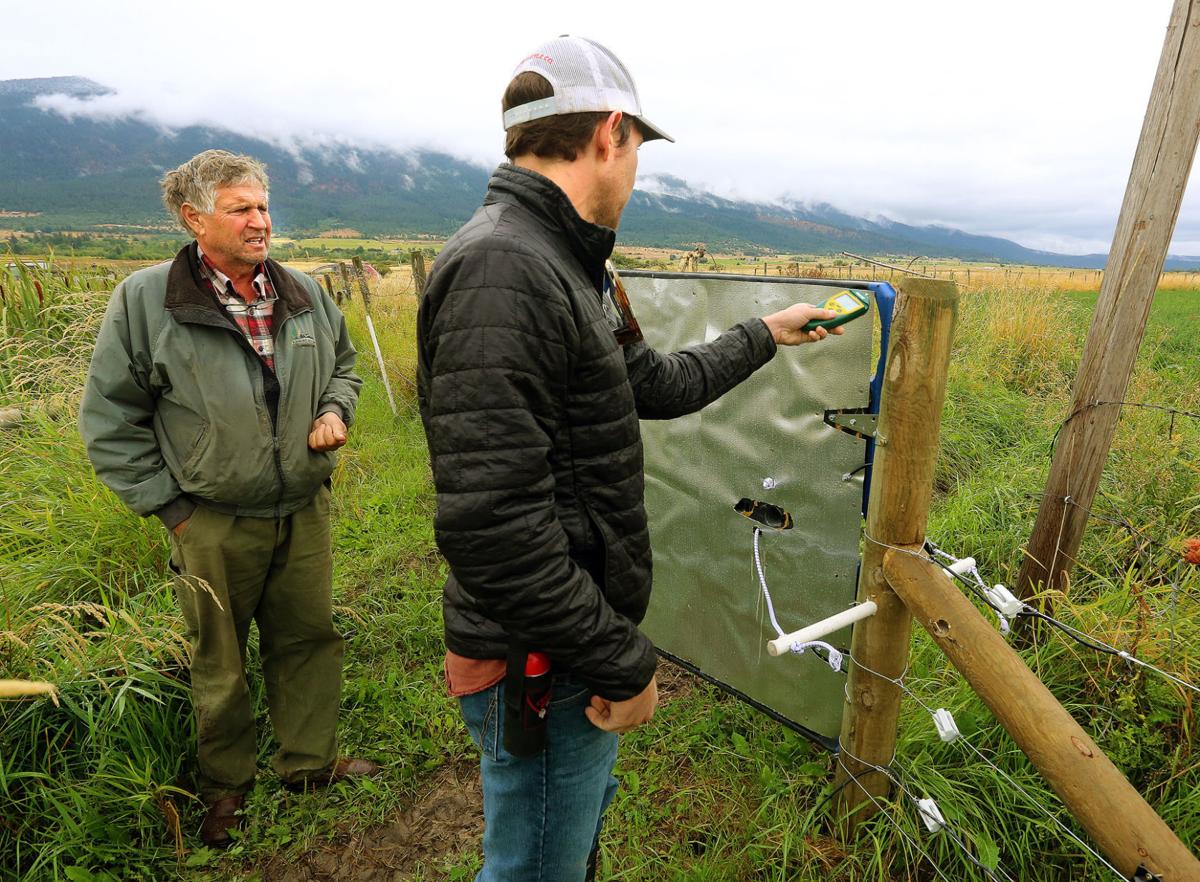 ST. IGNATIUS – Standing in a hollowed-out section in the middle of his 80-acre cornfield, Greg Schock bends over and picks up one of dozens of corn cobs scattered about.

It’s been picked clean of every kernel.

On the dark black ground just barely moistened by Thursday night’s welcome rain, there are grizzly bear tracks and fresh scat dotted with kernels of corn.

From where he’s standing, the longtime Mission Valley dairyman’s view past the edge of the clearing is obscured by the thick rows of corn that will sometime soon become the silage that his cows will depend on to eat through the winter months.

There’s a faint buzz from a drone flying overhead to record this year’s damage to his important crop. Its operator, Bryce Andrews of the group People and Carnivores, knows it’s unlikely he’ll spot any of the six grizzlies, including a sow with cubs, the local tribal wildlife biologist believes are currently residing in the cornfield.

The thick stand of corn makes for the perfect place to hide.

The fact that bears could be lurking nearby doesn’t seem to have much of an impact on Schock as he looks around the clearing where his view beyond its edge doesn’t reach much more than a few feet.

Over nearly two decades, he’s learned how to live with grizzly bears in the neighborhood.

Schock’s dairy is smack in the middle of one of the highest concentrations of grizzly bears in the Mission Valley. From his place, he can easily see Millie’s Woods where the bears tend to congregate as they come down from the high country.

Every fall, the Confederated Salish and Kootenai Tribes close off a mile-wide swath of land south of Post Creek and north of St. Ignatius to bird hunters to protect both humans and bears alike from unexpected encounters.

Living on the same place where his parents landed when he was just a baby, Schock had never seen a grizzly bear anywhere near the dairy before the early 2000s.

It was about that same time when grizzlies developed a taste for corn.

“It’s not a natural food source for the bears,” said CSKT wildlife biologist Stacy Courville. “It’s become something now that bears seek out. I don’t think there’s a cornfield in the valley where you won’t find bears.”

“It’s definitely a learned behavior,” Courville said. “It used to be when you looked at their scat you’d see apples, chokecherries and other natural foods. Pretty soon, I was seeing scat that was just solid corn.”

Bears and humans eat corn in pretty much the same way.

Grizzlies have learned to tear off the husks and suck off the kernels before leaving the cob behind.

Sometimes they will even take a few ears back to the woods to snack on later.

“They pack the corn with them,” Courville said. “I’ve seen ears of corn on the road or out in the field where they’ve dropped it. It’s become an important food source for them.”

From both the perspective of humans and bears, that’s not a good thing.

When grizzly bears focus on crops grown by people, they tend to get acclimated to humans. Sometimes that leads them closer to residences as they search for something else good to eat.

That can turn out to be a death sentence for a grizzly.

Andrews is the northern field director for the organization People and Carnivores. That group has spent a good deal of time working to reduce human and grizzly interactions in the Greater Yellowstone System.

“We want to try to do some good work in this part of the world now,” Andrews said.

After learning that upwards of 15 bears were filling their bellies a few years ago in Schock’s cornfield, the organization decided that seemed like a good place to start.

There are programs in place that pay livestock producers when they lose animals to grizzly predation, but there isn’t any help for farmers whose crops are damaged by the bears.

With that in mind, Andrews worked with the U.S. Fish and Wildlife Service to come up with the funding to build a three-wire electric fence around Schock’s cornfield in an attempt to keep the bears at bay.

The experience has been eye-opening.

Andrews and Courville have installed trail cameras all around the field in an attempt to learn how the bears react when they encounter the electric fence. On the videos those cameras produced, they’ve heard the sharp grunts and seen the fast-moving shapes of retreating bears that attempted to get past the wire.

Andrews has also seen where bears will walk the perimeter and look for an opening where they can sneak inside.

Schock believes the bears that are now residing inside his cornfield took advantage of the wire being turned off while Andrews was performing some maintenance earlier this year. Since then, the debate has been on whether they should turn off the wire in hopes the bears will leave or whether that lack of electricity will just encourage others to join in on the ongoing feast.

Courville has been attempting to capture the bears in a trap using road kill, apples and plums as bait.

“I can’t compete with the corn,” Corville said. “That seems to be what they like the most.”

Courville is a believer in electricity as a bear deterrent.

Working with Defenders of Wildlife, he’s helped install numerous systems around chicken coops, grain bins and fruit orchards throughout the Mission Valley. In most cases, those systems work well.

Occasionally there might be a bear that will go through the wire, but that doesn’t happen very often, he said.

“I think animals can often sense that electricity and will try to avoid it,” Courville said.

Andrews knows first-hand about the power coursing through that wire.

He was kneeling down one day on both knees when he reached over and grabbed the wire that he thought wasn’t powered up.

And he’ll never forget the time the knob on the top of his hat came in contact with a live wire.

“It felt like someone hit me on the head with a hammer,” Andrews said. “I think that’s how most bears hit that electric wire.”

While the electric shock doesn’t injure the bruin, it does give them something to think about the next time around.

Biologists know the Mission Valley is an important corridor for grizzly bears to return to their historic ranges around Montana and to help ensure the gene pool of the larger population doesn’t become stagnant.

A male grizzly killed a couple of years ago near Anaconda was born in the Mission Mountains. A bear from the Lincoln area summered here.

At the same time, the growing population of bears and their management by the tribes, state and private entities like People and Carnivores is creating an example of how grizzlies and humans can co-exist.

Today, grizzly bears can be found in the Mission Mountains and the farmlands all the way to the Flathead River.

Since the 1980s, there have only been four maulings, Courville said.

“For the most part, the bears are fairly well behaved, especially when you consider how many bears we have living in places that are so close to people,” he said.

While some local ranchers have lost livestock to grizzlies, Schock said in all the years that he’s lived near the largest concentration of bears in the valley, he’s only lost one old cow that was having a hard time standing.

“I’ve seen a herd of heifers chase grizzly bears across the fields before,” he said. “As we have moved further into their territory, they’ve had no choice but to move further into ours. You learn to live with them.”

Today, CSKT owns and manages Millie’s Woods as part of the 7,000 acres they manage as wildlife habitat throughout the valley.

Schock said he’s developed of a lot of respect for the way the tribes manage wildlife, including grizzly bears.

While some newcomers to the valley sometimes struggle with finding that balance of living with a top predator in their backyard, Schock stands as a testament that it’s possible.

“I really do love watching them,” he said. “I do wish they would eat a little less of my corn, but would I ever shoot one because of that? No. I would never do that. They are too much fun to see. This is their home too.”

Bear in back of pickup, supposedly near death, wasn't

PABLO — A Good Samaritan created a bit of stir in the parking lot of the Confederated Salish and Kootenai Tribal complex in Pablo Wednesday morning.

It’s hard for a grizzly bear to learn anything when it’s dead.

Longtime Mission Valley dairyman Greg Schock stands on the edge of a clearing inside his cornfield that was knocked down by grizzly bears. The corn provides an important source of feed for his dairy herd during the winter months. The organization People and Carnivores helped fund and then installed an electric fence around Schock's cornfield in an attempt to keep grizzly bears away from cornfield. It has been partially successful. Before the fence was installed, close to 15 grizzlies could often be found in the cornfield. On this day, a biologist estimated there were about six.

People and Carnivores Northern Field Director Bryce Andrews walks along a trail created by grizzly bears travelling between Millie's Woods and Greg Schock's cornfield north of St. Ignatius. Working with U.S. Fish and Wildlife, the organization People and Carnivores came up with the funding to build an electric fence around Schock's cornfield last year.

Grizzly bears eat corn in a similar fashion to humans. They remove the husks and eat the kernels while leaving the cob behind.