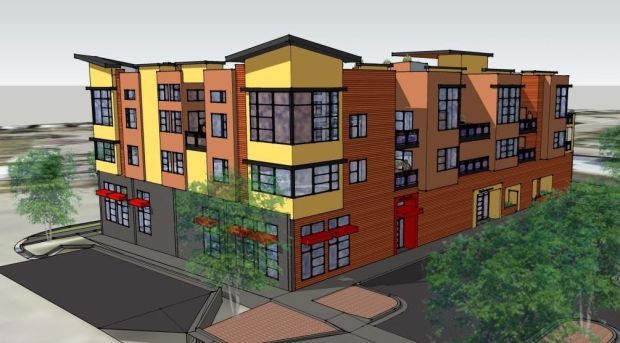 Toole Crossing planned for 812 Toole Ave. is expected to break ground in early 2015.

Missoula College, a $32 million project planned for East Broadway, is expected to undergo construction in the spring of 2015. 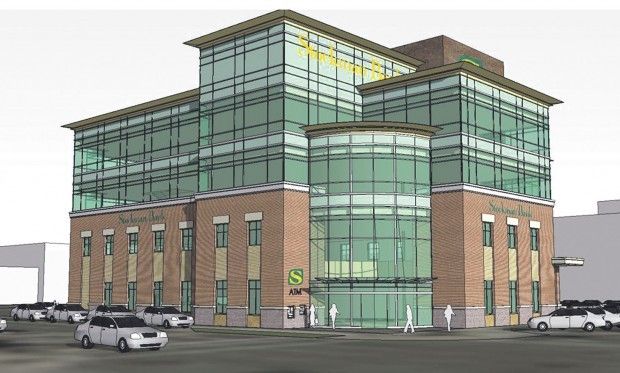 Stockman Bank plans to build a new bank on Broadway and Orange Street in March. The city believes the bank will stand 7-stories tall and look similar to the company's new five-story bank in Billings. 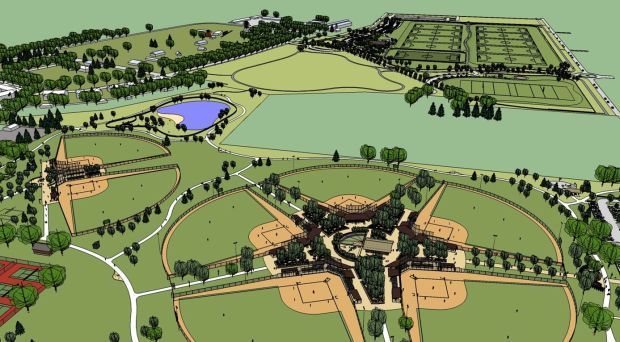 Construction should begin this spring on Fort Missoula Regional Park, a $36 million project approved by voters in November. 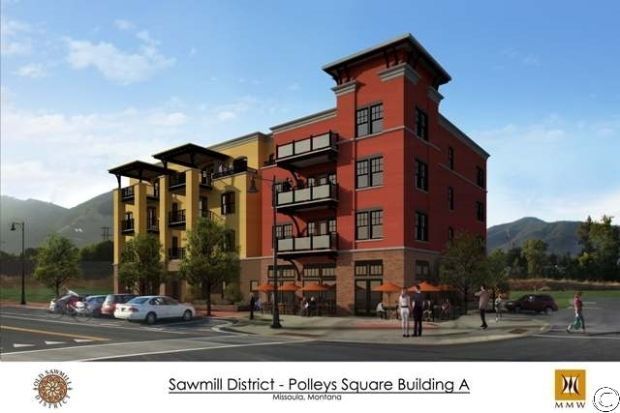 Developers of the Old Sawmill District expect to break ground on Polleys Square in March, the first of many projects slated for the old mill site.

The acceleration of the national economy may find its way to Missoula next year, with tens of millions of dollars invested in several building projects that could turn 2015 into a banner year for local construction.

Over the past two years, Missoula has issued building permits carrying a combined construction value of $160 million. But members of the city’s Development Services believe next year’s activity could surpass that, and bring a number of construction jobs and large projects with it.

“In 2015, we expect to see the level of development activity accelerate,” said Mike Haynes, director of Development Services. “Some major projects already announced include Missoula College, the Stockman Bank building and the H&M store.”

The University of Montana plans to break ground on Missoula College early next year. Slated for East Broadway between MonTEC and the SilverTip Apartments, the four-story, $32 million project will set the stage for redevelopment on the east end of town.

The Stockman Bank building will also emerge as one of the larger projects scheduled for 2015. Demolition of the Salvation Army on the corner of West Broadway and Orange Street is set to begin in March, with construction of a seven-story building picking up shortly after.

Nearby, plans for the proposed Fox Hotel project continue to progress, though it’s unknown what 2015 holds for the anticipated development.

Jim McLeod, the senior managing director with the Farran Group – the firm behind the project – said the plans were still embargoed by a nondisclosure agreement that will likely expire early next year.

Once it does, McLeod said, developers will share their vision for the Riverfront Triangle at West Front and Orange streets, where the project is expected to take place. The work could reshape the western entry into downtown Missoula.

“It is moving forward,” said McLeod. “We’re getting close, and once we get through that nondisclosure agreement, we can talk about the plans.”

Along with Stockman Bank and the Fox project, plans underway at St. Patrick Hospital may further enhance downtown’s western corridor.

“Other areas to watch in 2015 will be the Fox site, the Old Sawmill District and the Reserve Street and Russell Street corridors,” said Haynes. “It’s difficult to expand on proposed projects very much because some are still in negotiation, or are on the drawing board but haven’t been formally committed to or announced.”

Across the Clark Fork River, the lots remain empty in the Old Sawmill District, but Leslie Wetherbee, the property’s representing agent and part owner, said 2015 will finally see a number of projects break ground.

The 46-acre site has undergone a dramatic transformation over the past few years, sparked in part by a $12 million investment by the city. Construction of the town square-style development could begin in March.

“Things are taking longer than we expected, but we should see construction begin in 2015,” said Wetherbee. “We’ve got quite a few things going on there.”

Wetherbee said Polleys Square, a four-story condo project slated for Wyoming Street, will likely be the first project to move forward in the new development. Another lot is currently under contract with a local brew pub, which also plans construction this spring.

Wetherbee said developers of the district have roughly $20 million held in escrow under the EB5 program – an immigration investment program established by Congress in 1990. The money should come free “any day,” she said, and when it does, it may prompt other projects to move forward, including student housing and executive-style apartments.

“We have quite a bit in escrow and we’re waiting for approval of applications,” Wetherbee said. “We’re seriously expecting to get word any day now. It’s just a matter of when they start moving forward with those proposals.”

Changes are also coming to Southgate Mall, though details haven’t been released. Southgate Mall Associates purchased the old Val-U Inn just south of the property and plans to raze the structure early next year.

“That hotel is going to be taken down,” said Julie Gardner, the mall’s representing agent with Lambros Real Estate ERA. “The opportunity came forward for them to buy it. They wanted to open up the line of sight to their property, and this gives them flexibility for the future.”

Work on Missoula’s new Fort Missoula Regional Park is expected to begin next year as well, along with additional improvements to Brooks Street.

The Holiday Village Shopping Center on Brooks is lined up for a face-lift, and the new Toole Crossing – an upscale apartment project planned for Toole Avenue – is expected to break ground in the spring.

Other projects are rumored, but couldn’t be confirmed ahead of the holiday break.

“There’s so much pent-up construction demand and it’s all just being released,” said James Grunke, executive director of Missoula Economic Partnership. “This next year will shape what Missoula looks like for the next five to 10 years. We’re at a critical point.”

Approximately 100 new part-time jobs will be coming to Missoula in early March, when the new Kohl’s department store on Brooks Street opens it…

Building activity on North Reserve Street in Missoula continues at an even pace, with a new hotel under construction, along with a mattress st…

The old Stimson Lumber Co. sawmill in Bonner could win status as an inland port if a new company meets its goals in the coming months, providi…

It’s estimated that 15 percent of the nation’s malls will fail over the next 10 years, but the owners of Missoula's Southgate Mall have pledge…

Missoula’s emergence from economic stagnation will gain momentum over the next year as job growth picks up, construction booms and investors b…

Missoula 2015: How does your downtown grow?

The pieces have been coming together for months, and by the looks of it 2015 will be good to Missoula. A wave of downtown development is gaini…

Where are we going and how do we get there?

When the Missoula Economic Partnership was created and funded, Missoula was in a very different place than what currently exists. Economic dev…

The south side of Missoula will get a little taste of Brazil this summer when Five on Black opens its second location.

Economic development: The role of manufacturing in our growing economy

When I started writing this monthly column several years ago, it was intended to be used as an educational tool to explain how we went about d…

Rent prices continue to climb in Missoula, according to housing report

Rent prices continued to climb in Missoula last year for nearly every type of housing, but the overall real estate market is gaining strength,…

With growth pressure mounting but infrastructure lacking, the city of Missoula on Wednesday selected an engineering firm to create a master pl…

Crews deconstructing the old Safeway store on West Broadway should finish work this month, clearing the way for plans to erect a new medical o…

A groundbreaking ceremony was held at the Old Sawmill District in Missoula on Tuesday, marking the beginning of what will be a $250 million de…

Construction is now underway for a second upscale, energy-efficient condominium building at the Old Sawmill District in the heart of Missoula

The owners of the Holiday Village Shopping Center have submitted plans with the city to renovate their Brooks Street property, and another ret…

A plan to connect a city trail in Missoula with a trail in Lolo could go to construction next year and include a $4.5 million non-motorized br…

The corner of Orange Street and West Broadway in downtown Missoula is going to look much different in a couple years.

Kohl’s Department Stores confirmed Wednesday it has begun hiring managers to staff its new Missoula store as it gears up for a spring opening.

The owners of Missoula’s South Crossing redevelopment project announced three new tenants this week, each related to the food industry. Kraig Erickson, manager of leasing and development for the Woodbury Corp., said MacKenzie River Pizza Co. has broken ground on its new restaurant, to be located on South Reserve Street.

The city of Missoula hasn't had a Public Works director for two years.

The owners of Lolo Peak Brewery have backed out of plans to build a two-story brewpub at the site of the Old Sawmill District in central Missoula.

Toole Crossing planned for 812 Toole Ave. is expected to break ground in early 2015.

Missoula College, a $32 million project planned for East Broadway, is expected to undergo construction in the spring of 2015.

Stockman Bank plans to build a new bank on Broadway and Orange Street in March. The city believes the bank will stand 7-stories tall and look similar to the company's new five-story bank in Billings.

Construction should begin this spring on Fort Missoula Regional Park, a $36 million project approved by voters in November.

Developers of the Old Sawmill District expect to break ground on Polleys Square in March, the first of many projects slated for the old mill site.