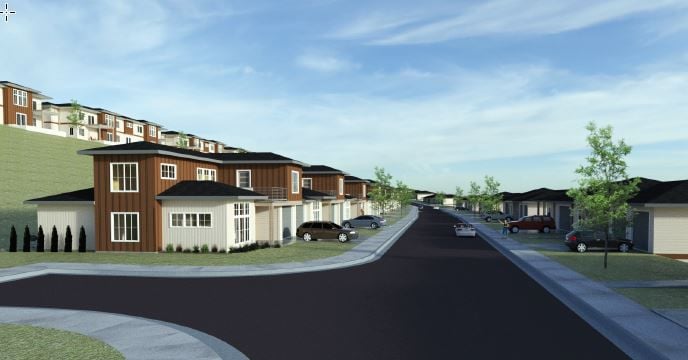 A rough conceptual drawing of what the proposed townhomes would look like.

A 68-unit housing project has been proposed along Hillview Way in Missoula’s South Hills area.

If approved, it would make a small dent in the city’s housing crunch. However, neighbors have concerns about impacts to wildlife, stormwater runoff, traffic and other issues.

The proposed 68-unit townhome exemption development — called a TED — would be exempt from normal subdivision regulations. It got a hearing before the Missoula City Council's Land Use and Planning committee on Tuesday.

The city’s development staff has recommended approving the development if 23 conditions are met, including long-term maintenance of stormwater facilities.

“Residential development as shown on the TED site development plan for this parcel is compatible with both the character and operating characteristics of uses in the surrounding area, which are primarily residential,” wrote Anita McNamara of the city’s Development Services office, who is the project planner assigned to the conditional use application. “The scale of the development in this location will not compromise either public convenience or the general welfare of the neighborhood or community if the conditions of approval are imposed.”

“During our time here we have experienced three events in which runoff was a problem,” they wrote to the city’s planning office. “In one such case enough water ran between our house and the neighbors over three days that it was deep enough to potentially run a jet boat.”

They are concerned about water coming off the hill if it’s not properly drained by the subdivision, which would replace water-soaking ground with non-permeable housing and over 300 parking spots. Their concerns were echoed by several other neighboring property owners.

“The total site area is 1,116,317 square feet,” they continued. “The area covered with buildings, driveways, streets and sidewalks will become impermeable to water absorption, much like the frozen hill which only happened in the winter. Now we will have the equivalent of frozen ground year-round in that area."

The Henriksons said that changing weather patterns may increase the levels of precipitation. They are concerned about having to purchase flood insurance or having their house destroyed. They are also worried that the extra height of the buildings would block the sun on their street in the winter, preventing ice from thawing and making it dangerous for kids, joggers and a local wheelchair user.

However, McNamara and a city engineer said the project is designed to mitigate stormwater runoff.

"The final stormwater plan for construction shall be reviewed and approved by City Engineering prior to zoning compliance approval of the townhome exemption declaration," McNamara told the council's Land Use and Planning Committee.

Another neighbor told the committee she was concerned that more deer would be hit by cars in the area and more children would encounter big bucks with dangerous antlers. Still other neighbors were concerned about loss of open space and increased traffic.

Paul Forsting with Territorial Landworks, who has been hired by the property owner, described the upscale townhomes as fitting in with the surrounding zoning and the city's growth plan calling for higher density.

"These are going to be high quality houses with the latest and greatest  building codes for energy efficiency," he said.

Jim Morton with the nonprofit Human Resource Council in Missoula said his organization was gifted a nearby land-locked parcel of land years ago, and he's hoping to negotiate with the townhome developers to create a road to the parcel so it can be developed.

Forsting said the townhome development first needs to get city approval to move forward before any negotiations with adjacent landowners can happen, however.

The Land Use and Planning Committee's hearing was informational only, and no action was taken. Several council members submitted questions in writing to city staff that they would like answered. The council will hold a public hearing on the matter on Monday, Dec. 17.

Missoula housing prices on pace to see largest jump since 2004

The poorest people in any community in America face systemic obstacles to breaking out of poverty, including a lack of job-attainment necessit…

The University of Montana is commemorating the 100th column of "This is Montana," a series about the state delivered free of charge to more th…

Nearly two years after it was created, the city’s Office of Housing and Community Development appears ready to make recommendations for specif…

Urgent interim amendments to Missoula’s zoning ordinances, which will require additional review and approval requirements on certain types of …

A rough conceptual drawing of what the proposed townhomes would look like.