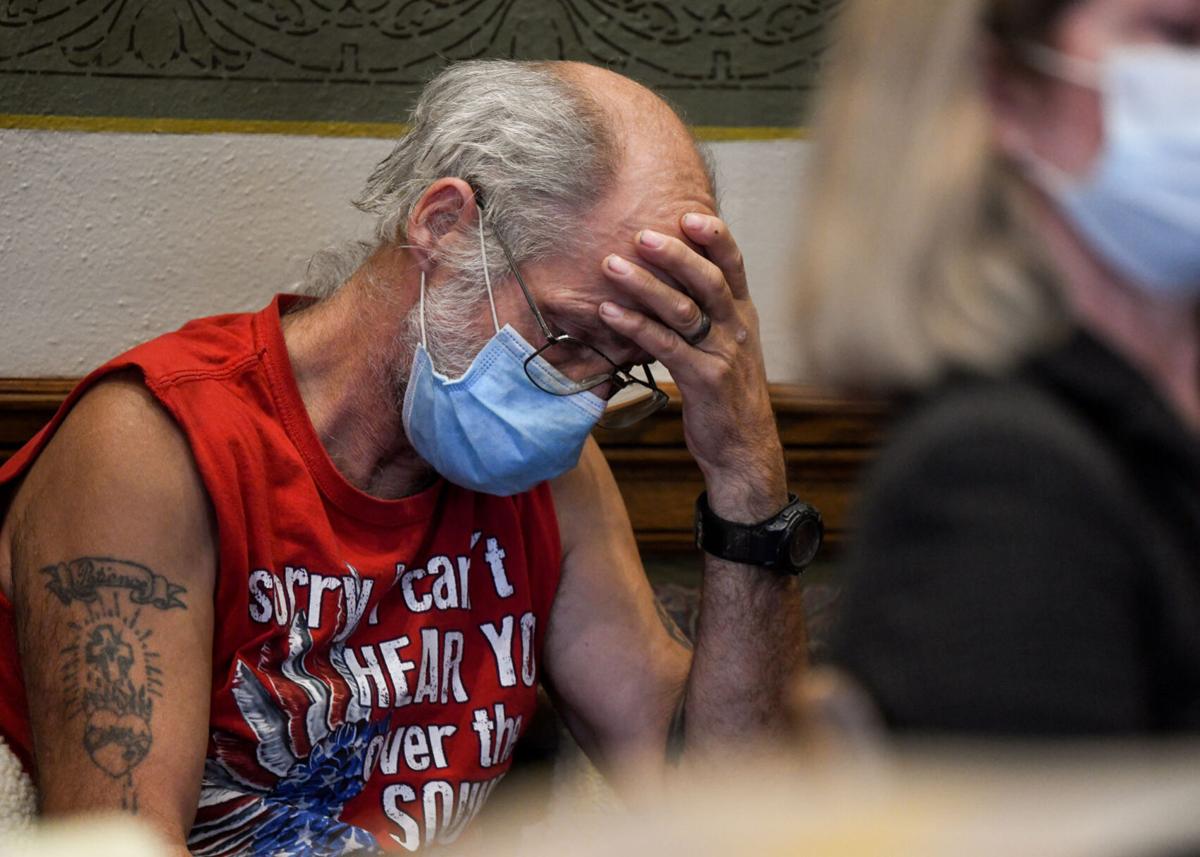 Malcolm Cobler, 56, reacts to exhibits of child abuse shown during his sentencing hearing at the Missoula County Courthouse on Wednesday. Cobler and his wife, Angela, were both convicted on multiple counts and sentenced to 10 years in prison followed by 10 years of probation. 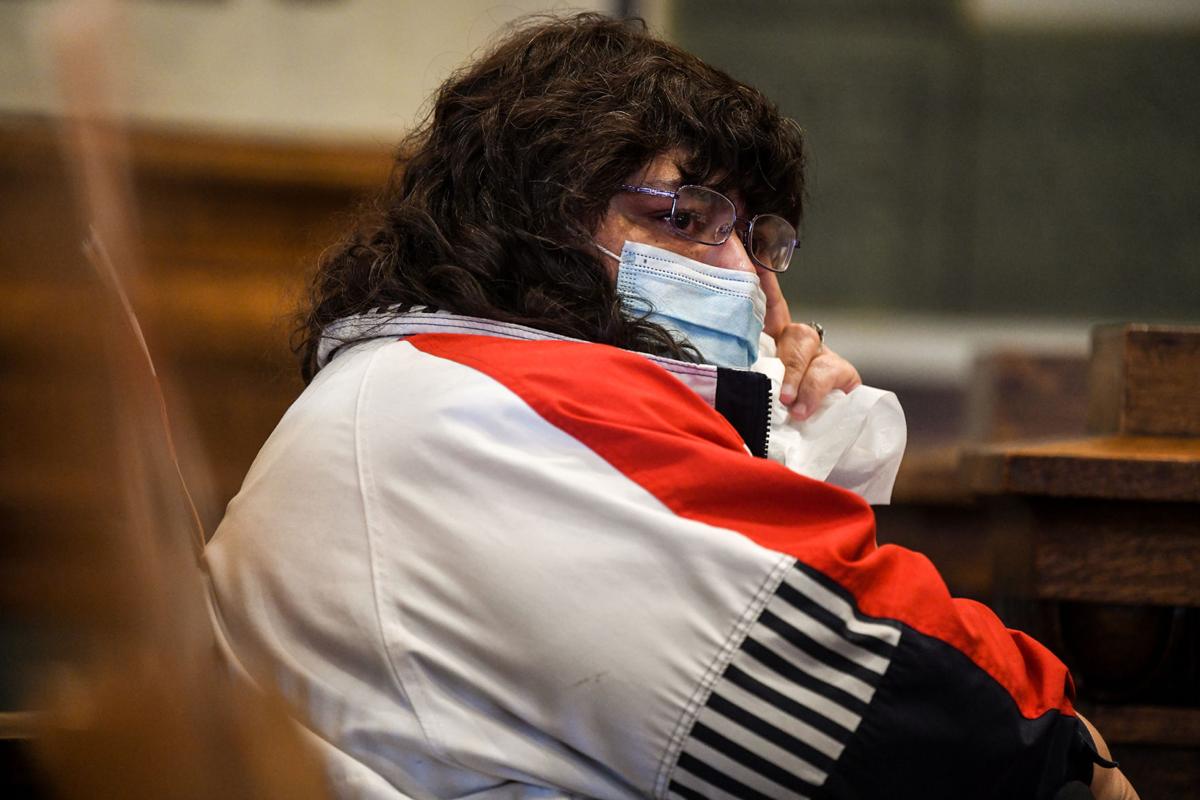 Angela Cobler, 57, reacts as her adopted daughter reads a victim impact statement, talking about the years of abuse she experienced while in the care of Angela and Malcolm Cobler.

This story has been updated to include additional information from the Coblers' sentencing hearing.

"The horrendous nature of these crimes is, frankly, why we have prisons," Missoula District Court Judge John Larson told the defendants, Angela and Malcolm Cobler.

Larson's comments came after more than an hour of testimony and evidence, both of which included depictions of the Coblers' two adopted children padlocked in their rooms, going without food, being beaten and hauled around in public on dog leashes. Larson sentenced both Angela, 57, and Malcolm, 56, to 10 years in prison, to be followed by 10 years of probation.

"You will not be treated, not even close, to the way you treated them. I can only read accounts of prisoner-of-war camps during World War II, the Gulag in the Soviet Union and the way people in East Asia have been treated to find something similar to the lack of nourishment, the constant fear and terror that each of these children experienced."

The two children were in the Coblers' care since 2011. They were removed from the home in July 2018. Social worker Grace Zitzer testified about the day she went to the Cobler home to investigate a report of bruising on the adopted girl's body that did not match her explanation to a doctor.

At the home, Zitzer said Angela Cobler had to unfasten the padlock outside of the girl's room before she could walk inside and see the large security camera pointing at the duct tape square on the floor; a sort-of corral where the girl would have to stay to be in view of the camera. The girl had a bruise on her eye and she showed the social worker the bucket in her room she had to use as a toilet when her adopted parents did not let her out. The girl also told Zitzer how she was not allowed to eat sometimes, and other times she was forced to eat so much that she would vomit. Her parents would then force her to eat the vomit, the girl told Zitzer.

"I will forever be haunted by this case," Zitzer testified during the hearing.

Missoula Police Detective Crystal Crocker went through the images and videos gathered from the Cobler couple's cell phones, as well as the security footage from cameras set up around the home. Several images showed the adopted daughter and son with towels over their heads and their arms held out. Videos showed Angela Cobler smacking the girl, blindfolded and nearly naked, with a stick or a bat, or striking the girl with the palm of her hand.

The text messages between Angela and Malcolm Cobler suggested they sought to alter their abuse patterns to not draw attention to the children's injuries.

"No face grabbing, you really need to watch where you're grabbing because they're asking about bruises," said one text Crocker read aloud during the hearing.

Investigators found evidence of abuse against a third child in the home, but it was so old that prosecutors couldn't bring charges on the claims due to the statute of limitations.

Throughout the hearing, Malcolm Cobler would often hang his head down to his hands. Angela Cobler turned away from the TV where such evidence was being presented to the courtroom. Deputy Missoula County Lacey Lincoln made note that the abuse on display during Wednesday's hearing was limited to a single month; the children had been in the Coblers' custody for years.

"What you saw today was a fraction of the information that the state has pored over for two years," Deputy Missoula County Attorney Lacey Lincoln told the judge. "(The girl)'s first statement, we didn't know how much of it to believe. It wasn't until we found actual proof that I started to believe. Because who would make up the things that she's saying. How can someone do this to their child."

The girl, now 14 years old, gave her own impact statement to the judge. She spoke of how they would put a leash around her chest if she went to the store (this was backed up by calls made to 911 that were played during the hearing), how they forced her brother to help them duct tape her to the bed and how the abuse broke down the trust between her and her brother.

"The stuff that they did is stuff no kid should have to go through," she said.

Defense attorneys for the Cobler parents spoke of their good intent in adopting the children, but said the developmental disabilities had overwhelmed their ability to properly care for the children. Angela and Malcolm both asked for forgiveness while apologizing during the hearing.

"My goal was to keep them together," Angela said during her statement. "I hope they can recover from what I have done to them and have a successful and happy life."

"I'm sorry for what I've done to these kids that I still love," Malcolm said. "I ask for mercy for the children and myself. I don't believe it's the best thing for these children to see their family locked up."

Larson said he did not believe 10 years in prison was too harsh a sentence, given the circumstances. Malcolm Cobler's case closes now with convictions for criminal child endangerment, evidence tampering and endangering the welfare of children and two counts of assault on a minor. Angela Cobler has been convicted of criminal child endangerment, endangering the welfare of a child and three counts of assault on a minor. Larson restricted their eligibility to meet with the parole board for the first five years of their 10-year prison sentence.

"These children will be at or over 18 by the time you're eligible for parole, but they'll certainly be able to go to the parole board and tell their story again, if they want to, about what you did to them," Larson said. "And if you have to spend the whole 10 years in prison, it's a small price to pay for what you did to them."

Nine National Guard soldiers contracted the virus during the mission, which began Oct. 26, about two weeks after confirmed cases began festering at the prison outside of Deer Lodge.

Two men, one who was recently suspected in a Flathead Valley homicide and allegedly bought meth from the Aryan Brotherhood, are facing federal drug and firearms charges.

Big Sky High School Freshmen took time out of the conventional classroom Thursday to cut their teeth as agriculture enthusiasts on 100 acres in the middle of Missoula.

MCPS to stay in hybrid model through Jan. 22

In a school board meeting Thursday night, the Missoula County Public Schools Board of Trustees voted to remain in the hybrid learning model through at least the end of the semester.

Charles Michael Covey, facing a deliberate homicide charge in connection with the murder of a man in downtown Missoula last Friday, is being held on a $1 million bond.

A 31-year-old man on Thursday pleaded not guilty in federal court in Missoula to sexually exploiting a child and distributing methamphetamine to a juvenile.

Malcolm Cobler, 56, reacts to exhibits of child abuse shown during his sentencing hearing at the Missoula County Courthouse on Wednesday. Cobler and his wife, Angela, were both convicted on multiple counts and sentenced to 10 years in prison followed by 10 years of probation.

Angela Cobler, 57, reacts as her adopted daughter reads a victim impact statement, talking about the years of abuse she experienced while in the care of Angela and Malcolm Cobler.