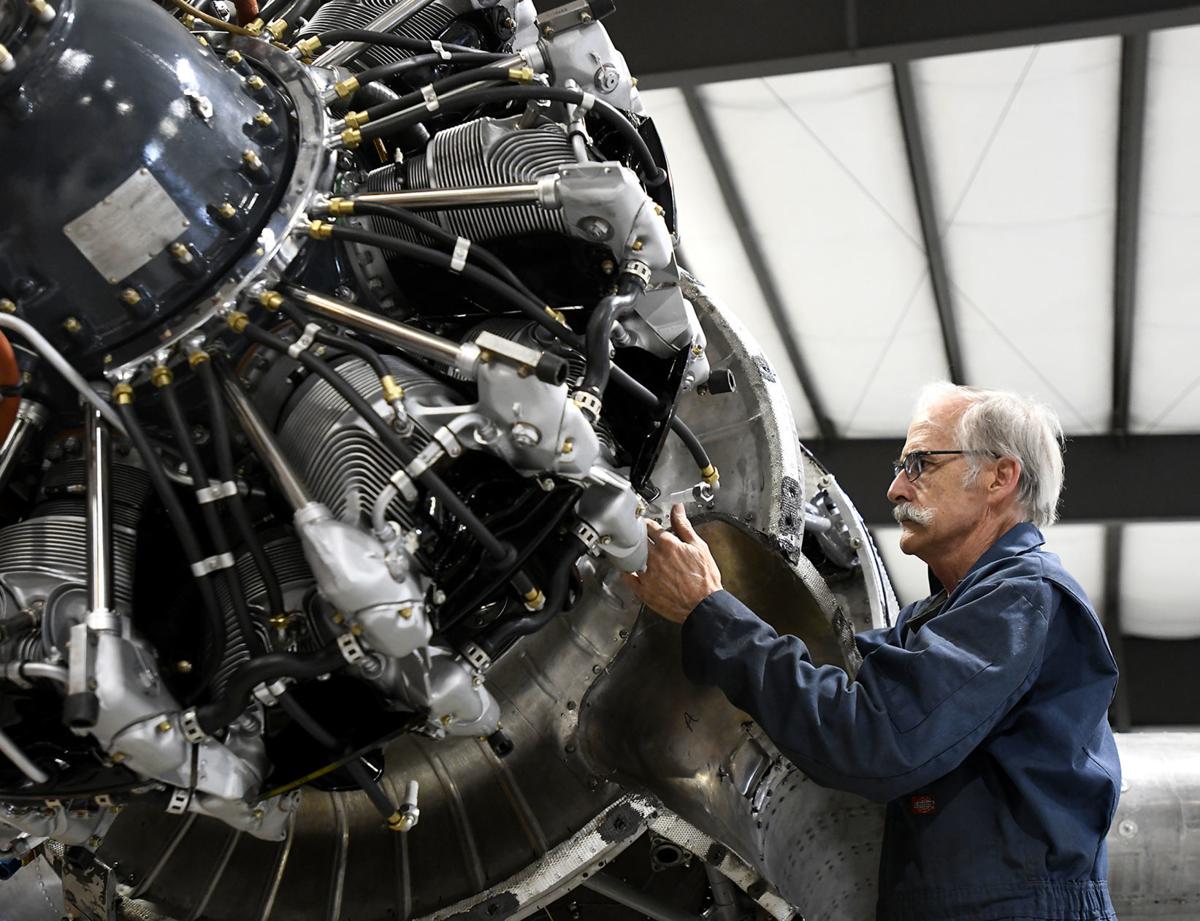 Jeff Whitesell works on one of the Pratt & Whitney engines of Miss Montana, the DC-3 airplane being restored for the 75th anniversary of D-Day, on Friday at the Museum of Mountain Flying. Whitesell will be chief pilot on the trip that begins May 13. 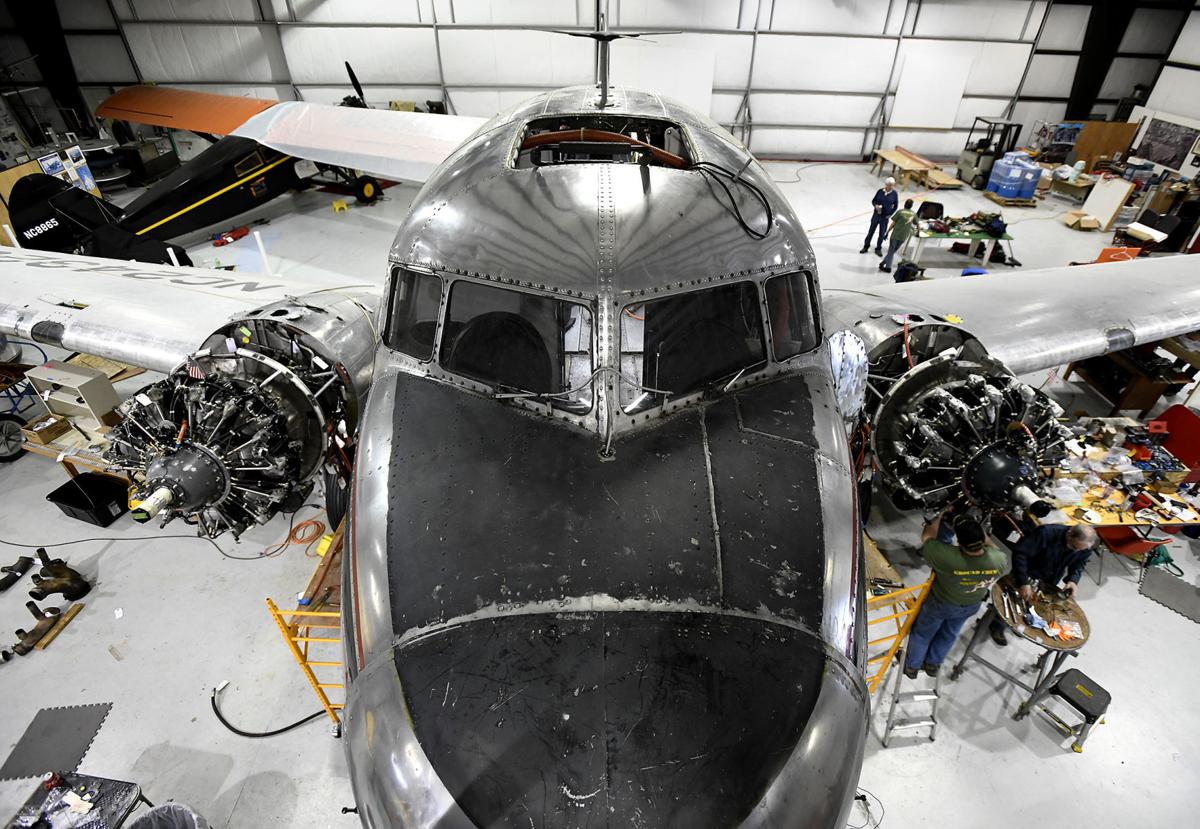 Miss Montana, the historic DC3-C47, sits in the Museum of Mountain Flying hangar on Friday as volunteers work on and in the plane. On June 6, it will drop paratroopers over Normandy along with other aircraft in a reenactment of D-Day.

A pair of bodies lay sprawled across the floor behind the cockpit of an old airplane Friday at the Museum of Mountain Flying. They were fastening brackets for 19 paratrooper seats.

Two men climbed ladders while another reached from the floor up to the left engine of the 75-year-old Dakota DC-3, all doing wonderful and mysterious things to its innards with a sparkplug wrench.

Jeff Whitesell, a Delta Airlines pilot who is weeks away from retirement after a 40-year career, sorted through the parts table under the same wing and scowled through his handlebar mustache when his search came up empty.

There was likely no other scene like this in any hangar in the world, a dozen or more determined volunteers spending their Friday afternoons on what has been a mission of passion to get the airplane known as “Miss Montana,” one that represents so much of Montana firefighting and aviation history, to France this June for the 75th anniversary of D-Day.

“On Saturdays we have twice this many sometimes,” said Eric Komberec, chairman of the Miss Montana to Normandy project and the new president of the Museum of Mountain Flying.

If all goes as planned, the Missoula airplane will join among roughly 20 C-47s (as the military versions of the DC-3 are called) joining the United States’ D-Day Squadron in Connecticut in mid-May. Then it’s on to France by way of Newfoundland, Greenland, Iceland, Scotland and England to join the international Daks (for Dakotas) Over Normandy effort.

Come June 6, they’ll be dropping paratroopers, including a planeload of Montana jumpers, in a re-enactment of the fateful assault in 1944 that turned the tide against Hitler’s army in World War II.

Komberec and Bryan Douglass are leading the Miss Montana-to-Normandy effort that has had its share of doubters.

It has been just 10 months since they launched the project to get the centerpiece of the museum, one that hasn’t flown since it arrived in 2001, off the ground and across the North Atlantic.

“We’ve been operating seven days a week for over a month now with countless volunteers working from 10 a.m. to sometimes 10 p.m.,” said Komberec, who’s at the hangar every day and often doesn’t leave until midnight. He just finished two weeks of pilot training at Neptune Aviation across the way, and continues to work on Miss Montana details every night, often until midnight.

“I’ve run out of superlatives to describe the enthusiasm and commitment of the volunteers and our own team,” said Douglass, who has missed just one day since Feb. 7.

“I’m still in suspense as to whether we’ll be able to pull it off,” Douglass allowed. “We have our A team working every day now and are hoping to hang props and start engines by next week, but it seems that every day we run into something new that delays us.”

Miss Montana has been outfitted with some of the most modern GPS and “Glass Cockpit” avionics technology on the market, Komberec said. It has two like-new engines, hydraulics and fuel system, and by next week will have new propellers.

"Multiple backup systems, satellite communication, and modern ELT tracking devices, new intercoms, interior and a complete set of paratrooper interior seats have all been added," Komberec said. "There isn’t anything that was spared or corners cut on this first-class restoration which is sure to be one of the nicest of the fleet and certainly the only one fully funded by volunteers labor and local donations."

Richard Schlesinger and his CBS Sunday Morning crew will be in Missoula this week to film a feature on the Miss Montana effort that Douglass said will represent the entire D-Day Squadron fleet. Komberec and Douglass said they’re hoping against hope to have at least an engine run outside the hangar on shooting day Wednesday.

They’d like to get Miss Montana 15 or 20 hours of flying time before she leaves for Normandy. Departure for the East Coast is set for May 13. After the D-Day commemoration the core will continue on to Germany for an event marking the 70th anniversary of the Berlin Airlift. Then it’ll be back to Missoula in late June, to the Oshkosh Air Show in Wisconsin in late July, and back home in early August for another 70th commemoration — the Mann Gulch fire tragedy in 1949.

A dozen Forest Service firefighters jumped from Miss Montana and met their doom on the hills above Gates of the Mountain north of Helena.

While the Museum of Mountain Flying at the Missoula airport is closed in the winter, Komberec said many of the volunteers for the Miss Montana project are new members who simply showed up at the open door.

“Everyone seems to be buzzing about this project and everyone seems to have a personal reason why they want to get involved, whether a love for anything aviation or a family member who fought in the war,” he said.

Whitesell, the Delta Airlines pilot, lives in southern California and Seattle. He’s been to Missoula four times since February and is here until he goes back to work in late April, flying to Sydney, Australia, and back twice before returning to Montana.

He’ll be Miss Montana’s chief pilot among the eight to 10 who’ll man the controls at one point or another. Actor Treat Williams, who threw his lot in last fall, will be second in command.

Like Komberec, Randy Schonemann has a day job at Neptune. He’s burning the candle at both ends as crew chief of Miss Montana, heading the restoration effort.

“Randy is the guy who has done the vast majority of the work, but when I saw his workload, I thought this is just too much for one guy,” said Whitesell, a longtime friend of fellow Western Airlines and Delta pilot Dick Komberec — Eric's father — who flew Miss Montana to Missoula in the first place to start the flying museum 18 years ago.

Whitesell turns 65 on June 4, his official retirement date from Delta.

“I don’t know how much you want to put into your paper about divine intervention, but I was a grumpy soon-to-retire guy who didn’t have direction,” he said. “This came along and I feel like I’m 19.”

DC-3s and C-47s have long been his favorite airplanes, and Whitesell said saving abandoned or neglected ones is “kind of my specialty.” He grew up working on them with a father who built his own airport and owned seven in his lifetime.

“One of the things that I wait for when I look at an airplane is that tug of the heart and I hear her calling “Save me, save me, “ Whitesell said. “People think I’m nuts, but when I walked through this door the first time in February, I saw the mess (of the dissembled airplane) and I looked right at her and she says, ‘I’m so glad you’re here.’ I’m serious. And I committed to Dick that night.”

A send-off gala for Miss Montana to Normandy is set for 5 p.m. Saturday, May 11, at the Museum of Mountain Flying, Missoula International Airport. Roughly $350,000 in cash and in-kind donations and organizers feel they need at least $50,000 more for fuel. To donate or RSVP for the gala, go to missmontanatonormandy.com or contact Eric Komberec at 406-240-0395 or talltimberpilots@icloud.com.

Never have western Montanans had a better chance to immerse themselves in the world of general aviation.

Miss Montana to Normandy: A bicycle built for two generations

Greg Siple rode a bicycle out to the Missoula airport Friday morning. There he wove another strand into the amazing web of connections to the …

Jeff Whitesell works on one of the Pratt & Whitney engines of Miss Montana, the DC-3 airplane being restored for the 75th anniversary of D-Day, on Friday at the Museum of Mountain Flying. Whitesell will be chief pilot on the trip that begins May 13.

Miss Montana, the historic DC3-C47, sits in the Museum of Mountain Flying hangar on Friday as volunteers work on and in the plane. On June 6, it will drop paratroopers over Normandy along with other aircraft in a reenactment of D-Day.