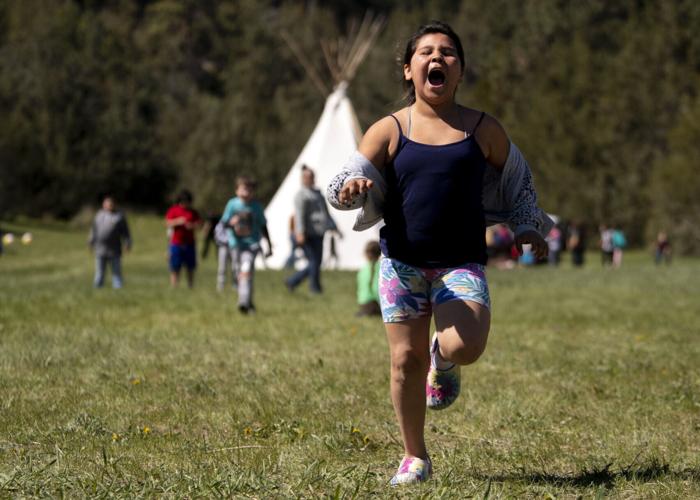 Johnnie James, a fourth grader at Pablo Elementary, participates in the run-and-scream game during the 35th annual River Honoring near Moiese on Wednesday. Elementary students from schools on the Flathead Reservation participated in educational events about natural and cultural resources on the Flathead River. 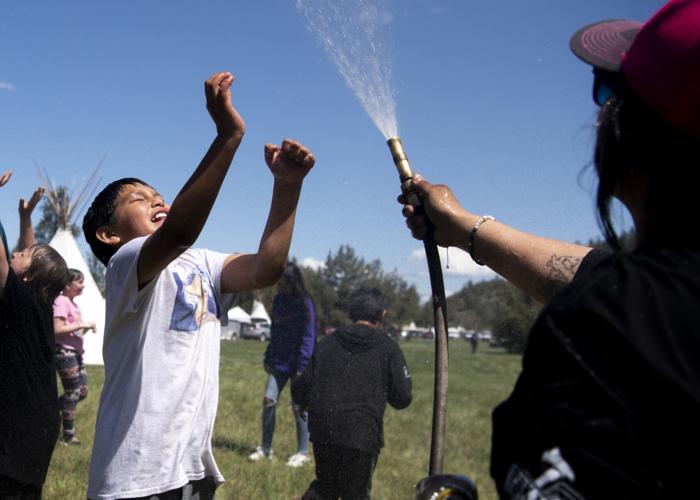 Joey Matt, a student from Dixon Elementary, runs underneath a water hose being used by the CSKT Division of Fire during the 35th annual River Honoring on Wednesday. 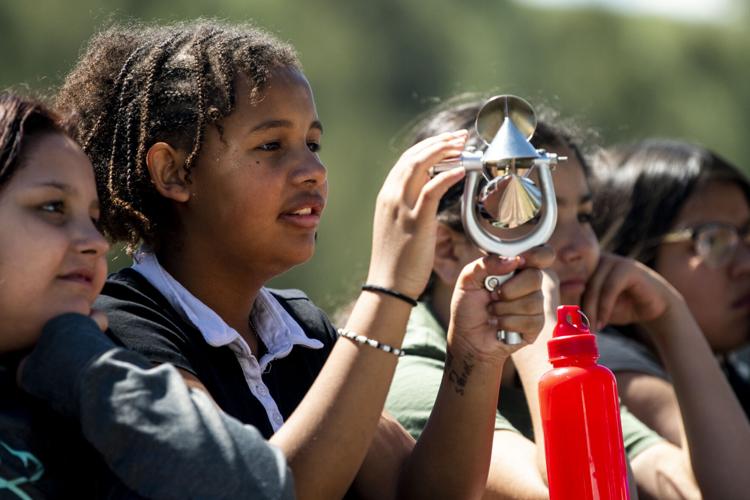 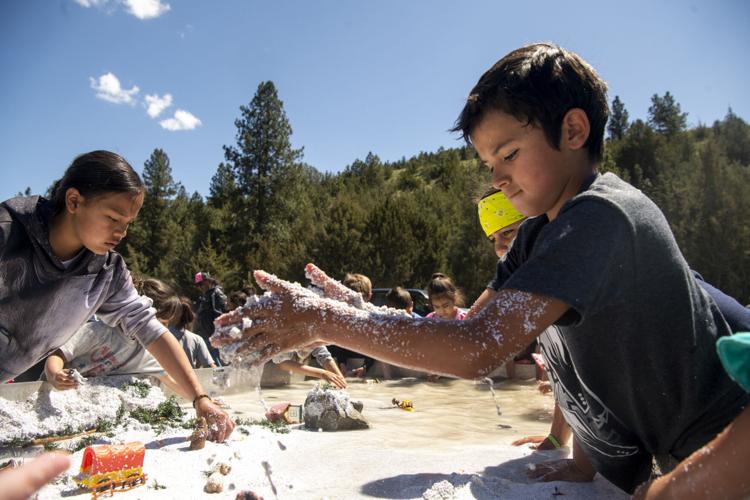 Students from the Nkwusm Salish Immersion School participate in educational events at the 35th annual River Honoring on Wednesday. 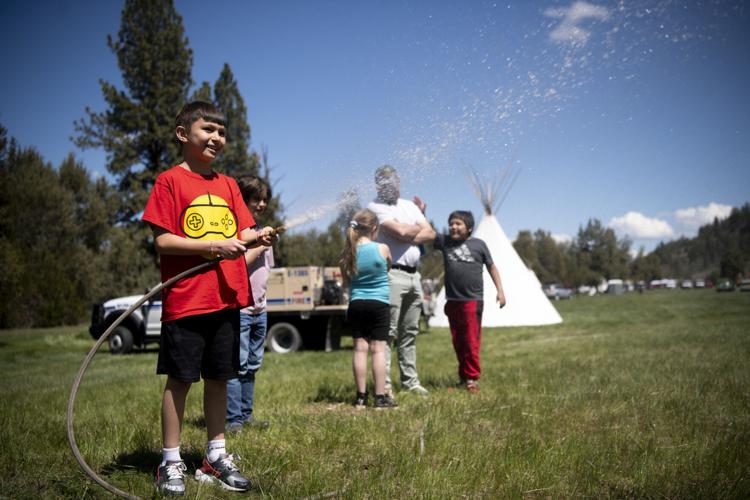 Jett Dusty Bull, a student at Dixon Elementary, plays with a fire hose during the 35th annual River Honoring on Wednesday. 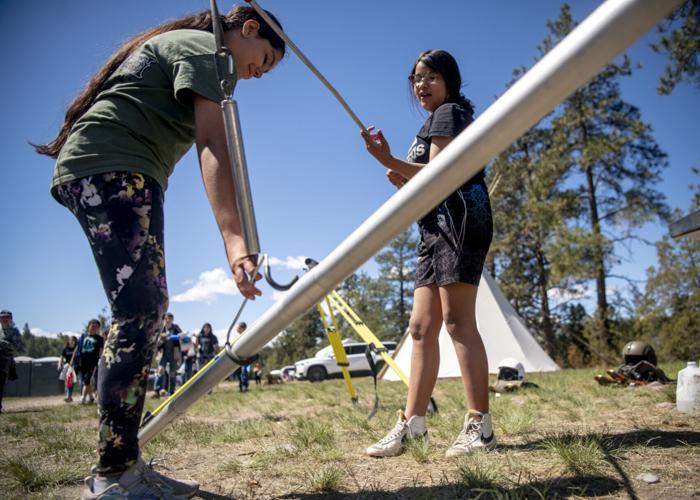 A sunlit field along the Flathead River outside of Moiese was home base for all kinds of student learning this week.

Wildlife and science lessons paired with cultural activities and traditional games like double ball, prompting some students to literally run and scream with glee.

All those play a part in the Confederated Salish and Kootenai Tribes’ River Honoring, which brought around 400 children a day on Tuesday and Wednesday for its biggest turnout since 2019.

The goal is to teach the kids about the river and natural resource programs, said Stephanie Gillin, CSKT information and education specialist, and “everything we do, we try to incorporate culture.”

So the presentations run the gamut from wildlife to forestry and water quality. They hear from Séliš and Q’lispé elders and scientists and experts from Salish Kootenai College and tribal departments. The Mission Valley Backcountry Horsemen come, too.

The students learn about river species from the Tribal Fisheries Program, including an opportunity to handle and identify fish. They find out how to measure snowpack and how runoff fills the water table that the area’s farmers and ranchers depend on.

“(They gain) the knowledge of how lucky we are to live in the area we live in, and how we need to protect that,” she said. They like to think in terms of future generations, she said, and want to provide them with the information they need to improve on their predecessors.

The honoring goes back 35 years, and usually brings in schools from on and off the reservation. It was postponed during 2020, and in 2021 came back with fifth graders from reservation schools and fewer presentations. It was limited but Gillin said it felt necessary.

“If we didn’t have it two years in a row, that fifth-grade class would have missed out completely,” Gillin said.

This year, they invited fourth- and fifth-grade classes from across the reservation. Some schools, like Dayton, Hot Springs and Nkwusm Salish immersion school, are small enough that they brought their entire student body.

“Getting back to the events in full capacity is not only good for the students, but also for the educators,” she said. They’re outside with plenty of room to move around. The weather was clear and warm on Wednesday.

This year, the Honoring has about 10 presentations each in two loops. The Pierre Loop is named in honor of the late Pat Pierre, a Salish elder who worked on the culture committee. The other is for the late Pablo “Chib” Espinoza, the chief game warden.

One of the most boisterous stops on the Pierre Loop was for “run and scream,” a traditional game played mainly by women and children. On Wednesday it was open to all.

It’s among the most popular, too, designed for fun and exercise. Naomi Robinson said they explain its purpose in a nomadic way of life and the importance of safety in numbers during travel.

“Women and children generally have to walk and carry the family possessions, and so we had to be strong enough to keep up with the main group and so we play games like this to help build our endurance and make us stronger,” she said.

In this version, they all screamed out en masse and took a run to see who made it the farthest before running out of air. The screams were loud, the sprints were all-out from one group from Pablo Elementary.

As drumming signaled that it was lunch time, Edward Ness, their teacher, said the students were responding to the honoring after two years of more limited options.

“Having this field trip, and just being outside, getting the cultural knowledge — they enjoy those kinds of things,” he said.

The introduction to the traditional game of double ball, not unlike lacrosse, includes a run-down on nutrition.

Paul Phillips and Hannah Lampry, Tribal Health fitness specialists, quizzed kids about traditional food sources: huckleberries versus imported fruits loaded with sugar; the healthy energy of natural foods versus processed foods; how fresh foods aren’t loaded with more calories than you can burn off in a normal day.

“Back then, we had no choice,” he said. "You had to be active to survive. Today, we have to make the choice to be active every single day."

Running was important for many reasons, including delivering important messages quickly across long distances. Practice comes in the form of this game, which was adjusted for the age group.

Two goal posts made of sticks are set up on the field just like soccer. Phillips brought a double ball, which is made of two pouches filled with bison hair, which the players can pick up off the ground with a stick, and with enough practice like Phillips has, thrown for a pass or a goal.

Divided into boys and girls, the team jostled for the ball, and if it landed on the ground a scrum of sticks descended for it until someone picked it up, and keeping it aloft on the stick make a break for it.

One student wandered back to take a break. Not long on the sidelines, he took his stick and headed back in for more.

The Kiwanis Park easement makes it possible to turn two rental homes at 333 and 401 East Front Street into an apartment complex.

How Montana ski areas are adapting to the climate crisis

With less snow in the future, Bridger Bowl, Big Sky Resort and others work to lessen the impacts and adjust to changing seasons.

The Missoula Art Park opens in the spring and closes in the fall, running on a seasonal cycle much like the farmers markets.

Johnnie James, a fourth grader at Pablo Elementary, participates in the run-and-scream game during the 35th annual River Honoring near Moiese on Wednesday. Elementary students from schools on the Flathead Reservation participated in educational events about natural and cultural resources on the Flathead River.

Joey Matt, a student from Dixon Elementary, runs underneath a water hose being used by the CSKT Division of Fire during the 35th annual River Honoring on Wednesday.

Students from the Nkwusm Salish Immersion School participate in educational events at the 35th annual River Honoring on Wednesday.

Jett Dusty Bull, a student at Dixon Elementary, plays with a fire hose during the 35th annual River Honoring on Wednesday.