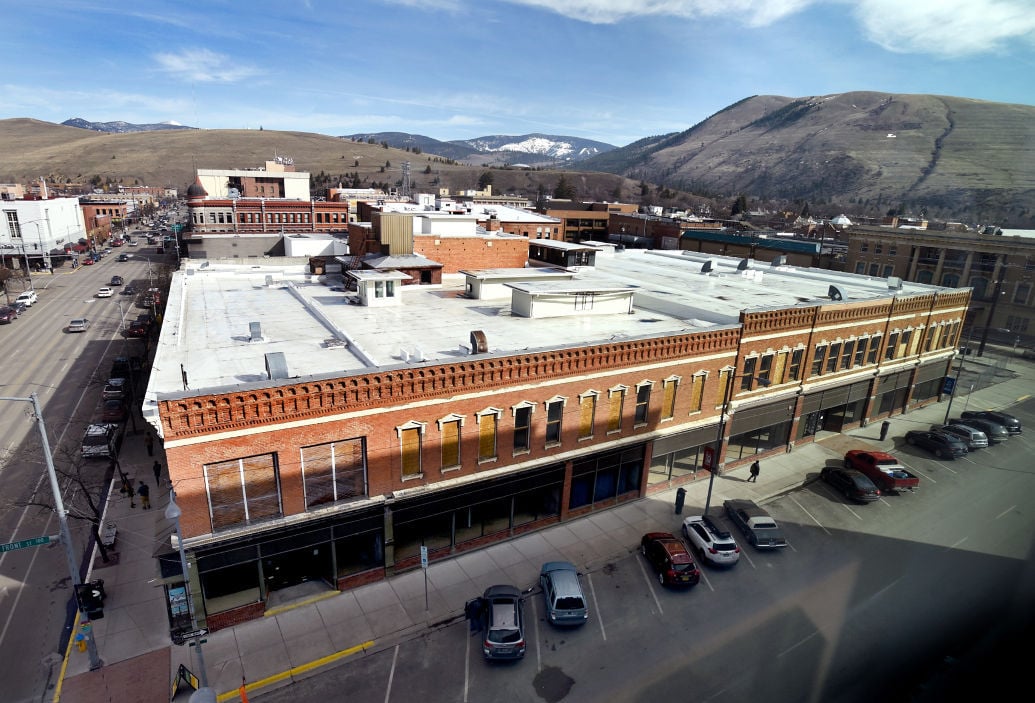 Asbestos in the roof and general deterioration of the Mercantile have been insurmountable hurdles to renovating the 139-year-old building. 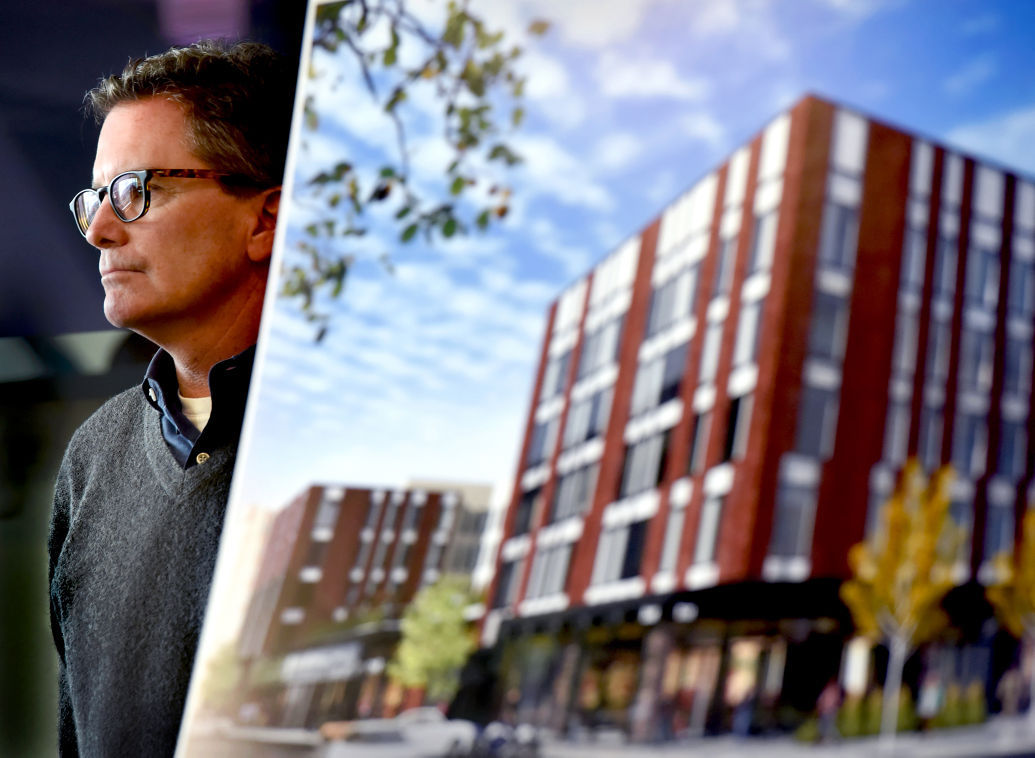 Andy Holloran of HomeBase Montana stands at a news conference Friday morning beside a rendering of the hotel his development group is hoping to build on the site of the old Missoula Mercantile in downtown. "This is going to be Missoula's living room," he says of the project. "It's going to be a place where people can visit and live for a short period of time." 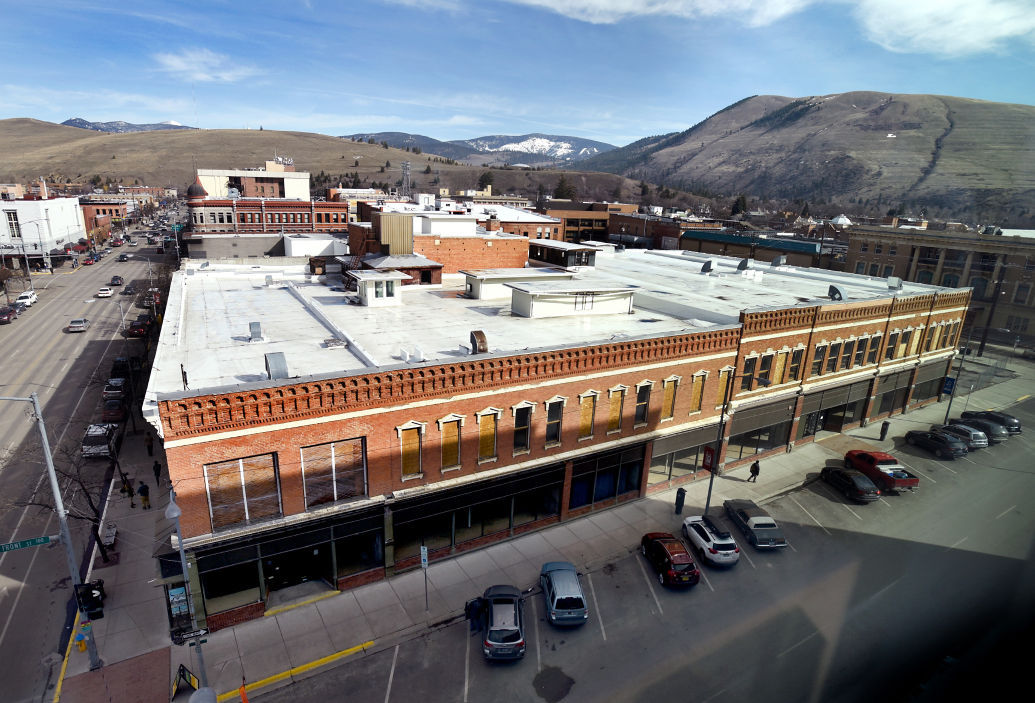 Asbestos in the roof and general deterioration of the Mercantile have been insurmountable hurdles to renovating the 139-year-old Missoula Mercantile.

A Bozeman developer has unveiled slightly altered preliminary designs for the five-story custom Marriott hotel he wants to build if he is granted a demolition permit for the historic Missoula Mercantile.

Andy Holloran of HomeBase Montana presented the revised proposal to the Missoula City Council’s public works committee on Wednesday. The new designs incorporate more brick in the facade, among other things, based on feedback Holloran has received.

Also Wednesday, the Missoula Downtown Association’s Board of Directors issued a statement on the proposal for the Merc, saying the organization is “committed to working with the developer and the Missoula community toward a goal of both preserving our historical values and developing a key parcel to its fullest potential.”

The Missoula Historic Preservation Commission has until June 7 to either approve, approve with conditions, or deny HomeBase’s application to deconstruct the Merc building on the corner of Higgins and Front and replace it with a $30-million, 154-room hotel. If the commission denies the application, HomeBase can appeal to the city council. The plans call for salvaging some materials in the building. The preservation commission will meet at 7 p.m. Thursday to discuss the plans.

Holloran said after listening to comments and feedback about the designs for the hotel, his architecture team has come up with a proposal that includes stronger vertical lines, more brick and ground-floor windows that more closely resemble the existing Merc windows.

“This design is maybe a little more classic, a little more traditional and a little more conservative, which are all in my mind positive adjectives,” Holloran said. “We now are looking at a window glazing system that does emulate more of what the Mercantile has today. We have a vertical brick expression that creates shadow lines, because just a flat surface would not be appropriate. When we started to look at what should this facade be, the feedback we got loud and clear was ‘why not more brick’ and there’s so many ways to utilize masonry, so that’s great feedback.”

Holloran said his team of architects has continued to research, analyze, debate and draw different designs based on public comments since they presented their ideas a month ago.

“Some liked it, a lot of people did not like it,” Holloran said of the original design. “I would say that the general sentiment was ‘can we create a general design that at a minimum celebrates a nod to the historical Mercantile building itself from the exterior?’ The feedback on the interior design has seemingly been very well received, so now we’ve turned our focus to the exterior.”

He added that the original design met their goals, but they are trying to collaborate and compromise.

“We took a self-critical look,” he said. “This project is better than it was a month ago, and it’s based on feedback we’ve received. It hasn’t been easy but I think the end result has been better.”

Council member Gwen Jones said her constituents want to know what guarantees there are in place that HomeBase will actually build what they say they are going to build if they get a demolition permit.

“We are wide open to any suggestion you have to work together to bind us,” Holloran said. “We don’t anticipate this being our last project in Missoula and I want this to be a project we can all be proud of.”

Ellen Buchanan, the executive director of the Missoula Redevelopment Agency, said that if the developers ask for any Tax Increment Financing, for which they would be eligible within the Front Street Urban Renewal District, they would be legally bound to a developer’s agreement with the city to build what they presented.

“I am reasonably certain they are going to ask for some funding,” Buchanan said.

Jones also asked if the developers are going to incorporate the historic metal awning that is facing Higgins currently, and Holloran said they are looking at using it in the interior of the Missoula Mews, an indoor public walkway that would serve as a sort of museum. He said the ground floor would have very high, 16-foot ceilings.

“I’m impressed that it came back so different,” she said.

The Missoula Downtown Association’s official stance on the proposal for the Merc was written by Aimee McQuilkin on behalf of the board of directors.

“The permanent closing of the Macy’s department store in March 2010 was a devastating blow for Downtown Missoula,” she wrote. “Downtown businesses have been significantly impacted by the loss, which included thousands of shoppers and 60 to 100 employees. Over the six years the building has sat vacant, we have seen graffiti, vandalism, weeds, failing sidewalks, and a crumbling facade. The denigration of the building has been a terrible eyesore that is negatively impacting Downtown Missoula in a variety of ways. There are great frustrations surrounding the demise of this building.”

McQuilkin said that the MDA has been a long-time supporter of economic development, historic preservation and maintaining cultural heritage. The organization has worked with a variety of potential developers for the site. She said bringing commerce and life back to the location is a valiant goal, and the proposal meets several goals of the Downtown Master Plan.

“The development as originally proposed has been criticized by many as not meeting another important goal of the Downtown Master Plan – historic preservation,” she said. “The developer, as well as others who have looked at the Merc property, has concluded that fully retaining the current building is not economically feasible. Some in the community have disputed that conclusion. With that in mind, the MDA is committed to working with the developer and the Missoula community toward a goal of both preserving our historical values and developing a key parcel to its fullest potential.”

She said the MDA supports bringing “life back” to that particular block, which has been a primary destination of commerce and connection since the late 1800s.

“Given the deterioration of the Merc building over the course of the last six years, the MDA is grateful for the opportunity to redevelop that site into a thriving destination in Downtown Missoula,” she concluded.

HPC commissioners deny bias at Missoula Merc meeting, put off vote until May

A historic preservation advocate on Monday expressed frustration with current plans for the Missoula Mercantile, but she agreed with Mayor Joh…

The Bozeman-based developers who want to deconstruct the Missoula Mercantile and replace it with a five-story, custom-built Residence Inn by M…

Developers: Preserving Merc facade is possible, but not economically feasible

The Bozeman developer who wants to deconstruct the Missoula Mercantile and replace it with a five-story, $30-million hotel presented plans to …

MISSOULA — The fate of the Missoula Mercantile building, one of the city's most important historical icons, is a powerfully divisive issue.

Get moving on Missoula Mercantile project

I attended the Historic Preservation Commission meeting on the evening of April 7. And come to find out, I hear things differently than the Mi…

This could be the end of the Missoula Mercantile as we know it.

You hear it from both sides – all sides, really.

The Missoula City Council's Land Use and Planning Committee, by a vote of 10-1, said the Historic Preservation Commission erred when it denied…

A compromise on the future of the iconic-but-vacant Missoula Mercantile building downtown is still nowhere in sight.

City leaders agree that Missoula’s downtown has the potential to be much more beautiful and inviting than it is.

Asbestos in the roof and general deterioration of the Mercantile have been insurmountable hurdles to renovating the 139-year-old building.

Andy Holloran of HomeBase Montana stands at a news conference Friday morning beside a rendering of the hotel his development group is hoping to build on the site of the old Missoula Mercantile in downtown. "This is going to be Missoula's living room," he says of the project. "It's going to be a place where people can visit and live for a short period of time."

Asbestos in the roof and general deterioration of the Mercantile have been insurmountable hurdles to renovating the 139-year-old Missoula Mercantile.