A riverfront view of the proposed $150 million Riverfront Triangle Project development at the corner of Orange and Front streets in downtown Missoula.

This image shows part of the Hotel Fox Partners $150 million plans for the Riverfront Triangle. 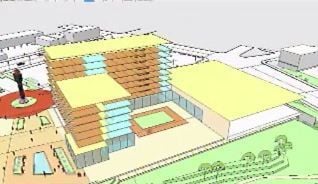 Plans for the Riverfront Triangle continue to evolve, including the first phase of the project, which will include a 210-room hotel and conference center. 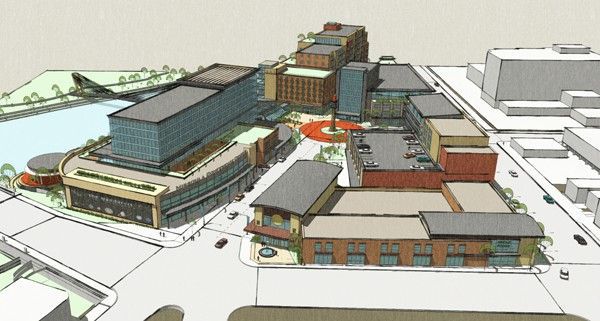 Developers are still on track to break ground on a new hotel and conference center on the corner of Orange and Front streets in the Riverfront Triangle in early 2017. The hotel would be the first phase of a planned $150 million development.

The Front Street view of the proposed Riverfront Triangle development.

A view of the Clark Fork River side of the proposed Riverfront Triangle development.

A Whole Foods Market grocery store or a Trader Joe’s could be coming to downtown Missoula in the next four to six years, along with a $150 million development that would include a 200-room hotel, a conference center, restaurants and retail, affordable housing, office space and high-end condominiums.

Barry Fisher, the project manager for the Riverfront Triangle redevelopment, also known as the Hotel Fox site, gave an update to the Missoula Community Forum committee on Thursday night.

A group of local developers – Hotel Fox Partners – are making good progress on plans to transform the area bounded by West Broadway, Orange Street and the Clark Fork River, which is currently a blighted assemblage of decaying buildings and parking lots. It’s a prime piece of real estate, and city officials and developers have been trying for years to better use the space and transform it into the western gateway to downtown. According to Fisher, the project is now closer to reality than ever. He said the developers should have a development agreement in place with the city as soon as next month, and site demolition and final designs could be finished by next year.

“We want to actually start construction next year,” Fisher said. “A lot of traction is being gathered with the project.”

The timeline for the entire project to be built, he said, is four to six years from now.

Fisher laid out the developer’s vision, saying they hope to attract a large anchor retail tenant such as Whole Foods or Trader Joe’s, although those plans are far from final. The three-block space would also include a new roundabout and a pedestrian walking arcade, but there also would be between 800 and 1,000 new parking spaces on multiple levels, much of which would be public.

“A real goal for us is to utilize the river,” Fisher explained. “The arcade feature would be central to how we bring along activity to the hotel. We want to create an environment where people can work and live and where there is entertainment and restaurants. We are extending the downtown area into this and trying to make a western bookend for the city of Missoula.”

Fisher, who said he builds hotels all over the world, said the developers are going to hire world-renowned architects to create a beautiful master plan. The development would be one of the largest urban infill projects in Montana history, only behind the $250-million Sawmill District development happening across the river.

“This is a very unique project, given the size,” said Ryan Salisbury, an engineer at WGM group that will conduct traffic and floodplain studies. “It is very large by Montana standards. All the pieces have to fit together. One piece doesn’t work without the other. The hotel doesn’t work without the conference center and on and on. Strategic parking is important. There will be improvement of parks and open space.”

Salisbury said it’s important that Missoulians recognize that opportunity that this project presents.

“Downtown has to be constantly revitalizing and growing itself, because downtowns can die,” he said. “We’ve seen that in other cities.”

The developers are still working on the exact configuration of the conference center and the hotel, because the Missoula Redevelopment Agency may contribute funding to make the center larger – perhaps 35,000 square feet – than the original 12,000-square-foot design. There would be outdoor dining that would overlook a public green space next to the riverfront. Fisher said plans for a new pedestrian/bike bridge across the Clark Fork, west of the Orange Street Bridge, will probably be deferred to the Missoula Redevelopment Agency.

“We have proposed to locate where the bridge would be and do as much work as we can,” he said. “Accessibility, once we get the whole thing built out, would be difficult so it’s better to do something today. We want to be proactive.”

Fisher said the 2009 Downtown Master Plan, which was created with the input of many citizens and groups in town, specifically targeted that area as a space where more housing and retail development is needed.

“The due diligence so far represents a significant investment,” he said. “Our goals on this project are to provide diverse employment and guest lodging along with office, meeting, residential and shopping options. Our goal is not to compete with downtown businesses but to attract more and extend downtown. It’s an opportunity to create a place with walkability, which is where Missoula is headed.”

In the past, the developers have said the project will generate more than $27 million per year in spending by out-of-town visitors and create 365 permanent jobs.

Jon Wilkins, the city council’s liaison to the Community Forum committee, expressed his support for the project.

“I personally am so excited for this,” he said. “You tell us you are maybe gonna break ground next year. We have been trying to redesign Russell Street for 10 years, maybe longer, and that might finally happen next year.”

Fisher said he appreciated hearing that.

“On behalf of the developers, encouragement from the community goes a long way,” he said. “They have spent a lot of money getting to where we are at today.”

Missoula city leaders met with developers Wednesday for an update on the planned $150 million Riverfront Triangle Project downtown, which woul…

Within the next 15 months, downtown Missoula is likely to expand to the west as construction begins on the Riverfront Triangle and at St. Patr…

As an effort to radically transform the western edge of Missoula’s downtown moves forward, the city has come up with a list of things it will …

Members of the Missoula City Council got to bring up concerns and questions on Wednesday about a proposal for a new, multi-million-dollar deve…

Work is expected to begin this spring on one of the most complicated and oft-delayed transportation infrastructure projects in Missoula history.

A riverfront view of the proposed $150 million Riverfront Triangle Project development at the corner of Orange and Front streets in downtown Missoula.

This image shows part of the Hotel Fox Partners $150 million plans for the Riverfront Triangle.

Plans for the Riverfront Triangle continue to evolve, including the first phase of the project, which will include a 210-room hotel and conference center.

Developers are still on track to break ground on a new hotel and conference center on the corner of Orange and Front streets in the Riverfront Triangle in early 2017. The hotel would be the first phase of a planned $150 million development.

The Front Street view of the proposed Riverfront Triangle development.

A view of the Clark Fork River side of the proposed Riverfront Triangle development.