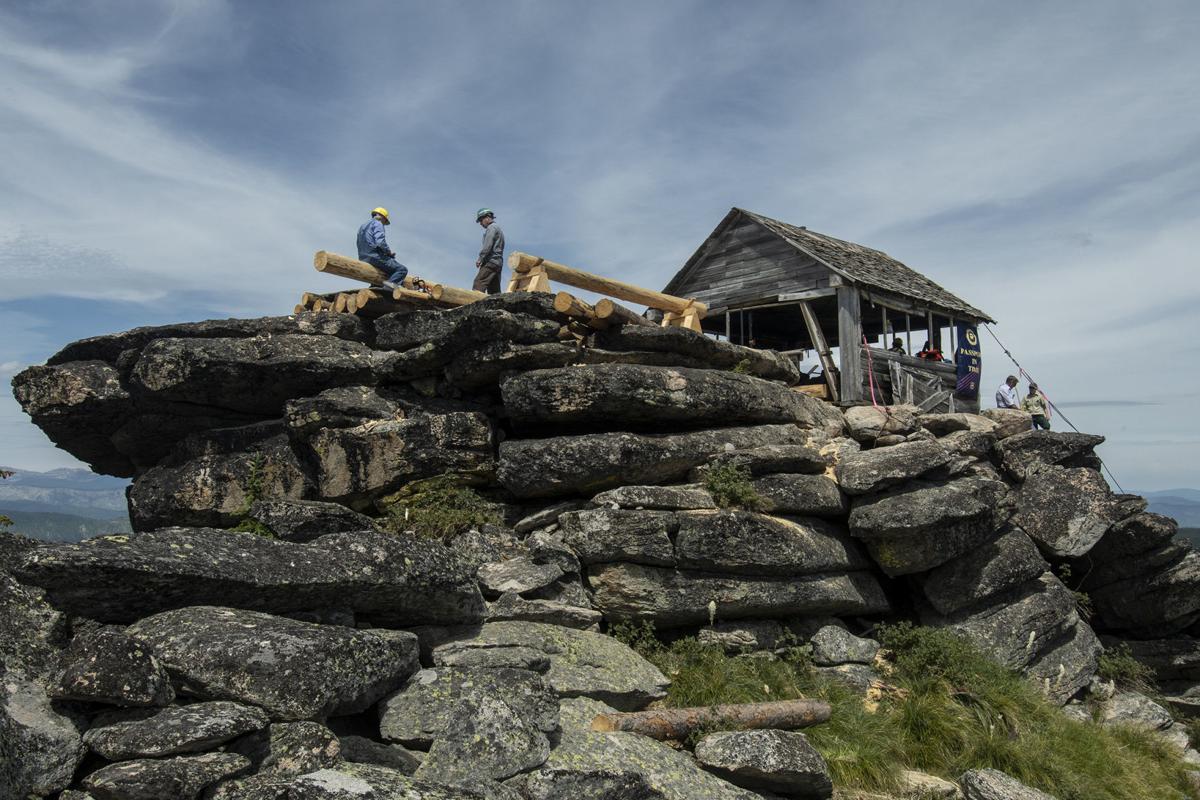 Teams of volunteers with "Passport in Time," a cultural heritage resources program sponsored by the U.S. Forest Service, are working alongside the USFS to restore the Skookum Butte fire lookout through a multi-year project in the Lolo National Forest. The structure, which was built in 1928, has been unoccupied since 1960. 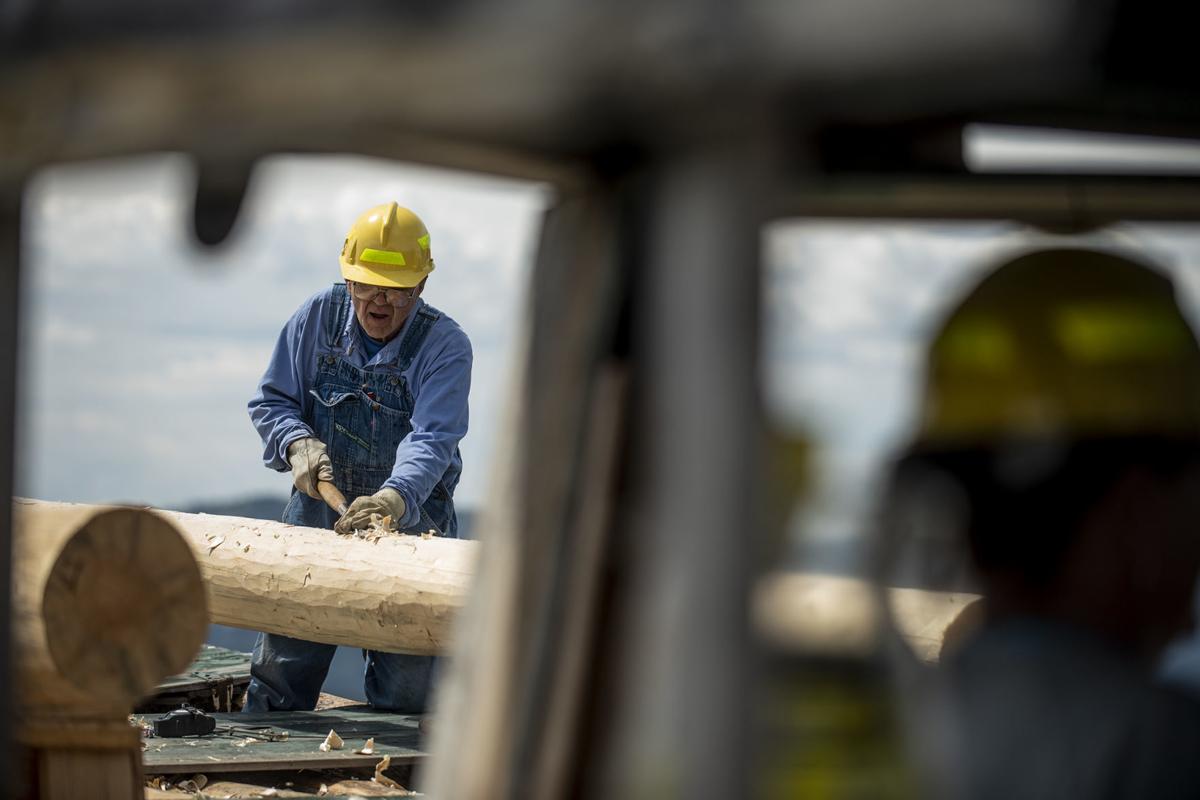 "Passport in Time" volunteer Mark Olson planes the surface of a spandrel beam, which will be used to support the base of the renovated fire lookout, on Monday morning. Olson recently drove from his home in Texas to work on the renovation project. 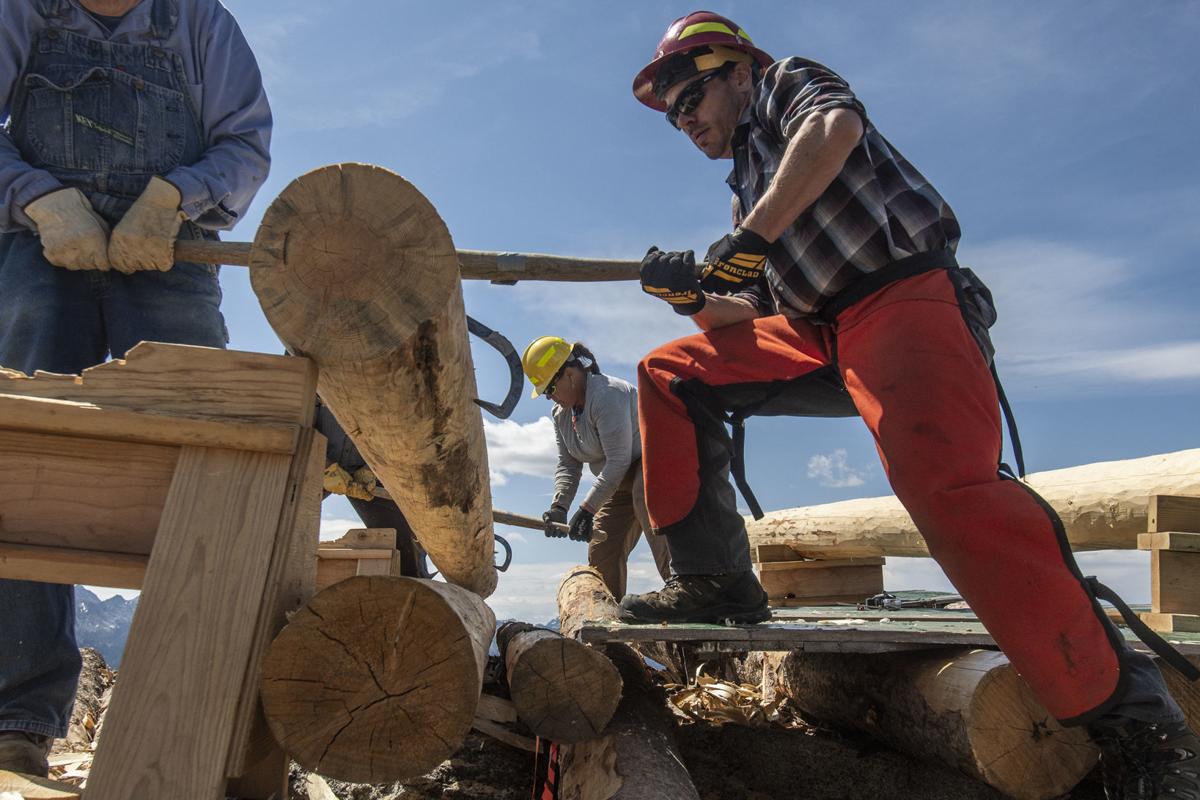 Jack Poppen, front right, a member of the U.S. Forest Service's Region 1 Historic Preservation Team, and a group of volunteers with "Passport in Time" lift a spandrel beam onto a wooden stand at the site of an ongoing project to renovate the Skookum Butte fire lookout in Lolo National Forest on Monday morning. 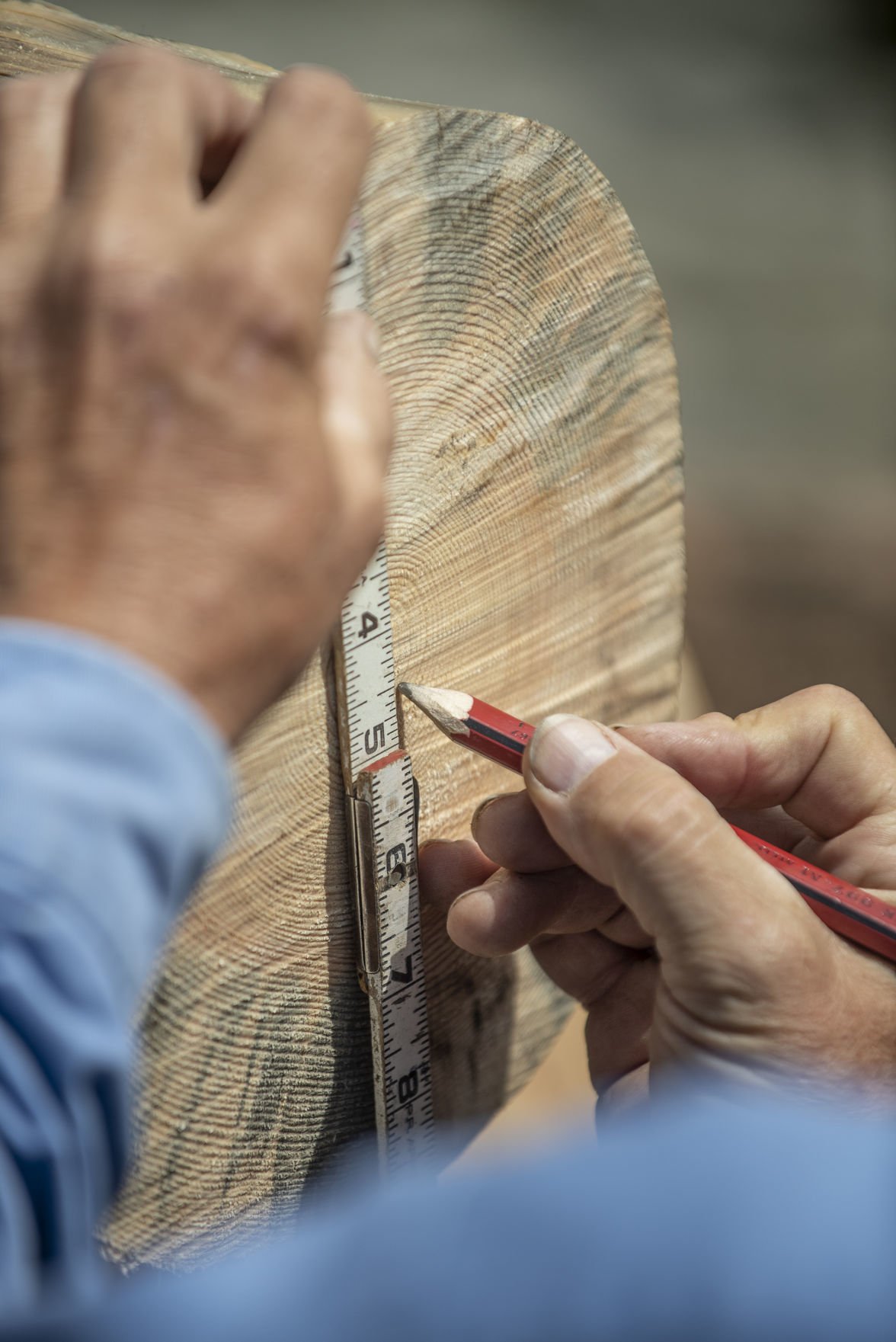 The crews were working on a two-week schedule for Phase One of a three-part plan to restore the structure. Over the next few years, volunteers will repair and stabilize the rock foundation, replace rotten wood, re-roof the structure, replace the ridge flashing and complete a few other repairs. 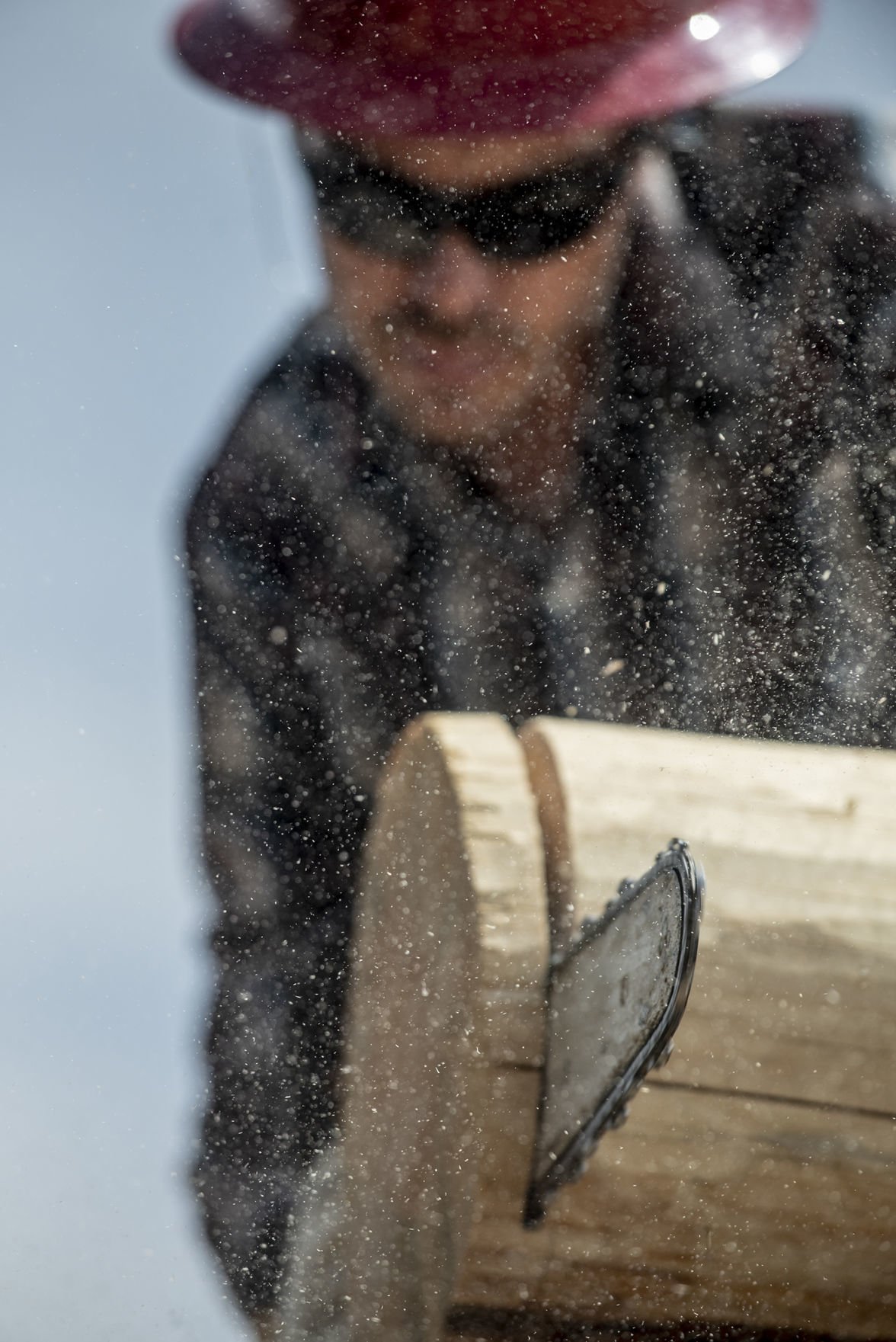 "My hope is we open the door for the public to understand more of our use of renewable resources,” Jack Poppen said. “It’s a really popular place for people to hike to." 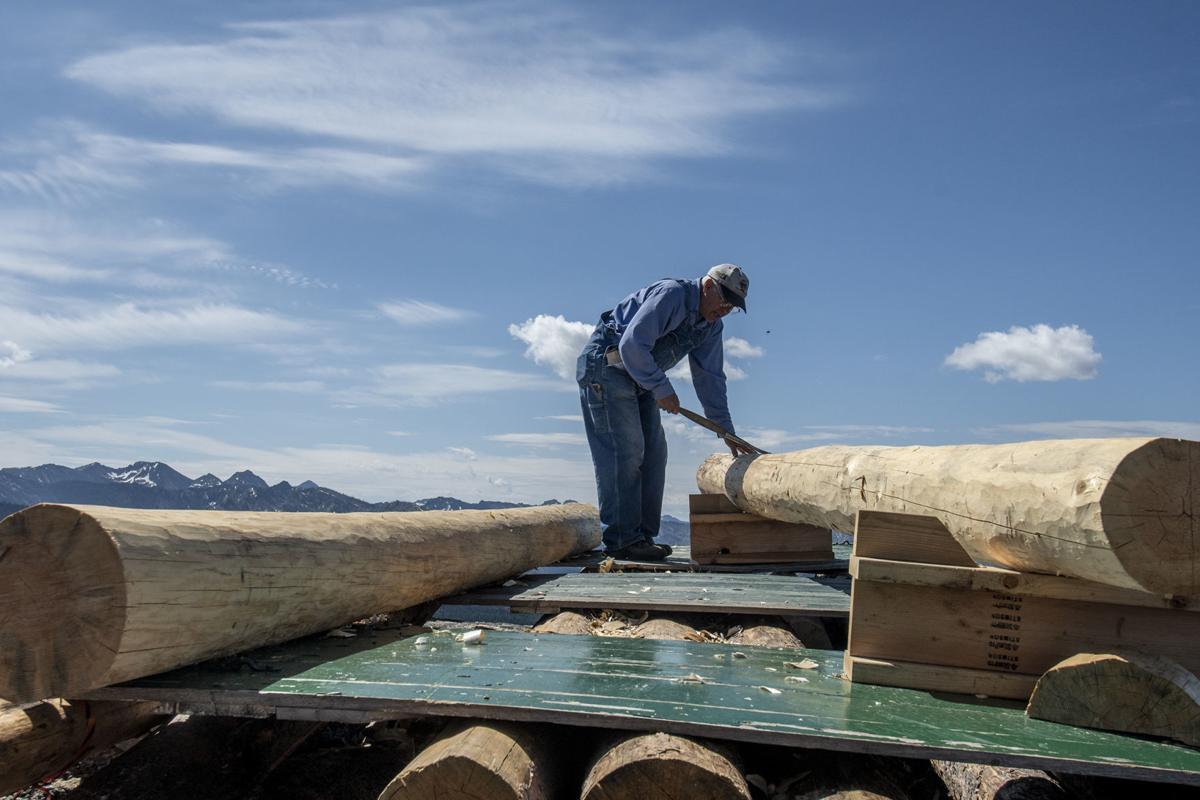 Mark Olson drove an estimated 1,600 miles from his home in Texas to get to the project site. Olson's background is in sheet metal working. 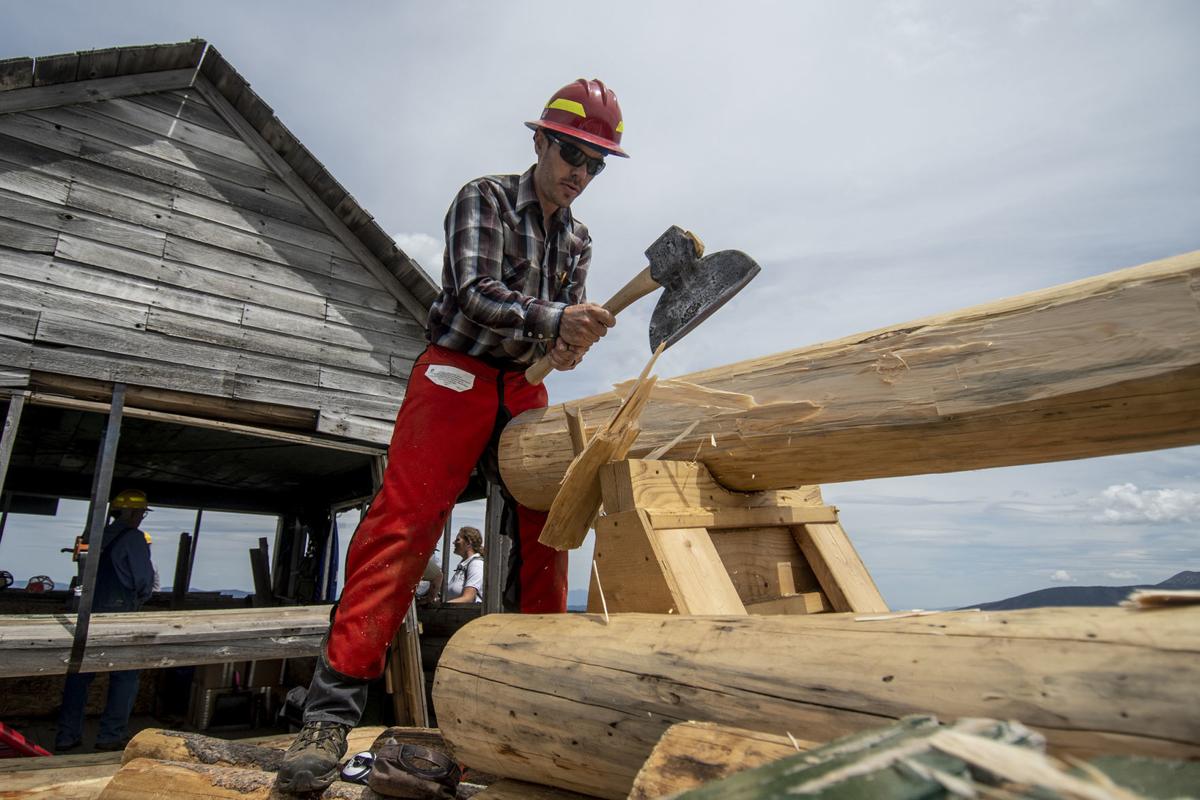 Jack Poppen uses a broadax to flatten the top of a spandrel beam, which will be used to support the base of the renovated fire lookout. 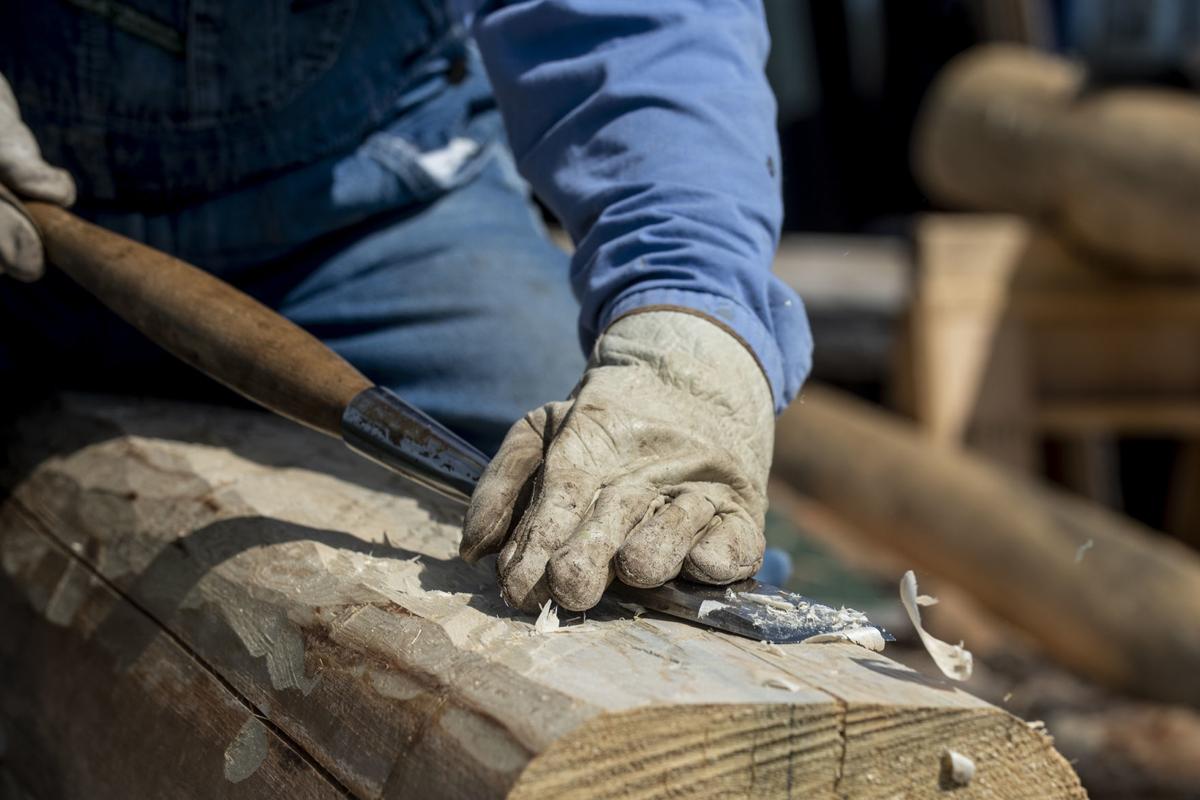 The site is an active talus slope, according to Sydney Bacon, an archaeologist on the Lolo National Forest. Falling rocks and debris have compromised the structural viability of the lookout over the past 50 years, requiring maintenance on all sides. 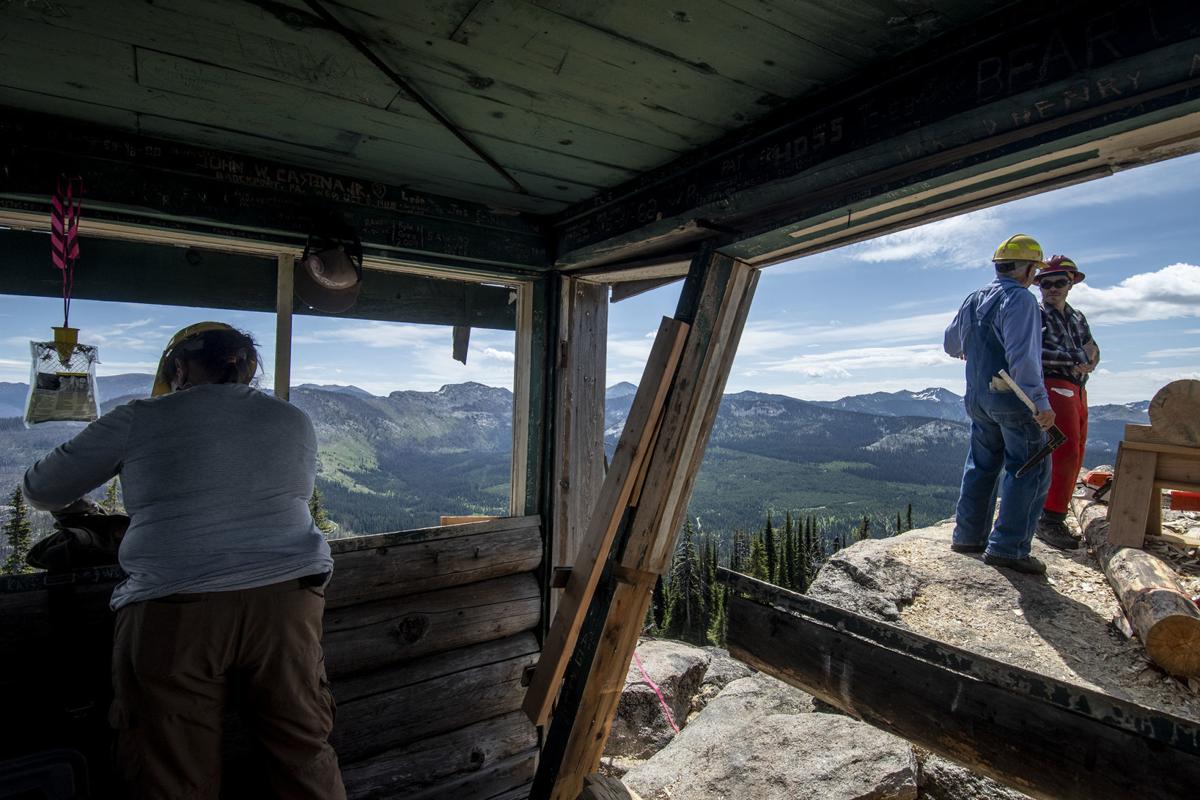 Skookum Butte is a rare "Grange Hall" or L-5 style lookout. It is one of two L-5 structures still standing in the Lolo National Forest. 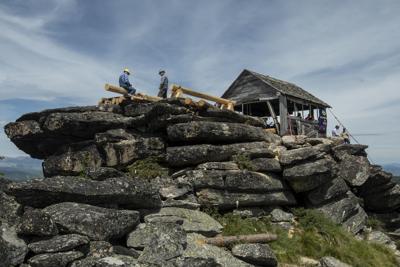 LOLO NATIONAL FOREST — Past the sea of beargrass, beyond the high mountain meadows filled with lupines, yarrow and asters, above the pines burned in the 2017 Lolo Peak fire, sits a 91-year-old treasure that bears silent witness to people's ability to dream big.

The Skookum Butte fire lookout is a testament to ingenuity, but the shelter is masked in mystery. Someone — no one knows who — thought it was a good place to perch a cabin atop a tumble of talus rocks. It’s held in place by four enormous guy wires anchored into the gray granite stones blackened with lichen. Look closely, and small copper strands running from the structure to the dirt below the rock outcropping show how the lookout was grounded.

“There’s pretty spectacular views up there. It’s amazing how far you can see,” says Kyle Stetler with the Forest Fire Lookout Association. “It’s like it was used until it wasn’t used, then it fell off the radar and disappeared. I think a lot of stuff was just lost to time, probably into someone’s round file.”

The fact that it’s still standing, despite decades of wind, snow, storms and lightning, reflects the workmanship that went into constructing the lookout. The fact that somehow, someone hauled more than 20 large logs up the surrounding scree field shows the commitment to precaution, only 18 years after the Great Fire of 1910 swept across the landscape, charring 4,700 square miles in Idaho and Montana.

And the artistry in the craftsmanship is evidence of the care taken to ensure this obscure yet classic “grange” style of an L-5 lookout remains in place almost 60 years after going out of service, providing shelter and a window into history for those who make the short yet arduous trek. Sydney Bacon, an archaeologist on the Lolo National Forest, says as far as she knows, this is one of only three L-5 style lookouts left in the world, with its unique design, square with five tiers of base logs and gable roof.

“Unfortunately, we don’t have a lot of historical information on this lookout,” Bacon says. “But that’s kind of common on the forest. There was such a boom on building lookouts at that time.”

Like so many lookouts, this one probably had a single bed, stove, table and chair, with the fire finder in the middle of the room. Stetler said in many of the lookouts, the chair’s legs were capped with glass insulators, and lookouts were told to stand on the chair during lightning storms.

“It would be interesting to trace the history of where that came into practice,” he said with a chuckle. “Hopefully, it wasn’t from a lookout who learned that the hard way.”

Today, the exterior white paint is long gone, leaving only traces along the five courses of large gray logs stacked to form the base of the four 14-by-14-foot walls. Some of them are rotting. A few of the shutters that protected the thick, six-pane windows have fallen to the ground. The structure’s been tilted toward the southwest for a few years, and the green-painted interior is covered with names and dates etched into the upper edges of the walls. Parts of the flooring are missing, and the subfloor is compromised.

Jack Poppen, a member of the two-person Region 1 Historic Preservation Team, is part of a group that has camped about a mile below the lookout for the past two weeks. Each day, they made the hike up the steep switchbacks to the 7,236 foot summit, where they mainly used traditional tools to ensure that the lookout will remain in place for generations to come.

Last week, Poppen was directing the efforts of the two Passport in Time — or PIT — volunteers and three paid Forest Service employees to shore up the lookout. They only had a two-week window to do the work, but they made significant progress.

They removed the windows, and with the help of the Missoula Backcountry Horsemen, they delicately packed them for the trip down the mountain. During the winter, crews will stabilize what they can and replace what they have to, then reinstall the windows within the next two years.

They’ve taken out five tiers of logs from the base of one side, where the wind and weather rotted them, and are replacing them with new logs of the exact same size. A few new logs on an adjacent wall already are in place. A year ago, Poppen measured the bad logs’ diameters and trail crews felled what he needed along Elk Meadows Road. The Lolo Forest’s helitack crew flew them to the site.

Today, he pulls a small stone away from the bottom of a corner log, revealing where the base was hand-hewn into a 4-by-4 vertical tenon joint that fits perfectly into the mortise base — “essentially tongue in groove before tongue in groove was used,” Poppen notes. Each of the five horizontal logs that make up the lower section of each wall was flattened on the top and bottom with axes, so they sit tightly without chinking.

“We got lucky and found the actual plans for an L-5,” Poppen said. They’re typewritten and call for 82 logs of various sizes, including hewed timbers that are seasoned for corner posts. For the roof, 800 shakes or 3,500 shingles were needed. A wide range of larch and fir lumber was used, as were different sizes of screws and nails. The plans show window and door framing details, noting that “Door casings can be lightly nailed to door framing” and “Window casing can be well nailed to framing.”

“Slope tenon ½” helps to lock logs together. Extend ends ¾” it improves appearances,” someone wrote on the plans. “… The secret of good workmanship is in hewing to the line, leave half the line on the timber, never cross it, this insures better results.”

Poppen is clearly impressed by the craftsmanship.

“It was overly constructed,” he says. ”They didn’t need to make it this complicated, but they did, and that’s key to us; the integrity of the building is key.

“It predates the standard lookout design by about a year. The evidence shows what kind of tools they used; a key part of this job is to look for clues and evidence of how it was built and why, then we try to recreate it.”

On this warm summer morning, Mark Olson of Texas, a volunteer with Passport in Time and a former sheet metal worker, is using a giant chisel to smooth the surface of a log that will replace one that’s too weathered to remain. Meanwhile, Kim Dufty of Colorado is working on the interior.

“I was a seasonal worker on the Lolo in 1984,” Dufty said. “I came back to help on Skookum Butte. Look at this,” she adds, sweeping her arms wide to the vistas. “This is an amazing place.”

By now, the tools are packed up and out, with the volunteers heading onto their next adventure and Poppen undertaking a new renovation or stabilization elsewhere for a different national forest. The lookout’s corners are stabilized, and before winter hits, plywood will cover the window holes.

And the door will be open to visitors.

“As long as it’s safe and stable, we encourage people to come in. That helps keep it from getting vandalized,” Poppen said.

At this point, the future use of the structure is unknown. It could be part of the Forest Service’s cabin rental program, or it could just be preserved for the public’s general use.

Jen Hensiek, the Missoula District Ranger, said they have several groups that help sponsor or care for projects on the Lolo National Forest, and he encourages anyone with interest in the Skookum Butte lookout to contact the district for more information.

“If we can find the right group to help take care of Skookum Butte, that would be great,” Hensiek said.

To get there, turn left on Highway 12 west in Lolo, then right onto Elk Meadows Road 451 to Skookum Butte Trail #304. Bug spray is recommended, and the elevation gain is about 1,000 feet for the 1.25 mile hike. 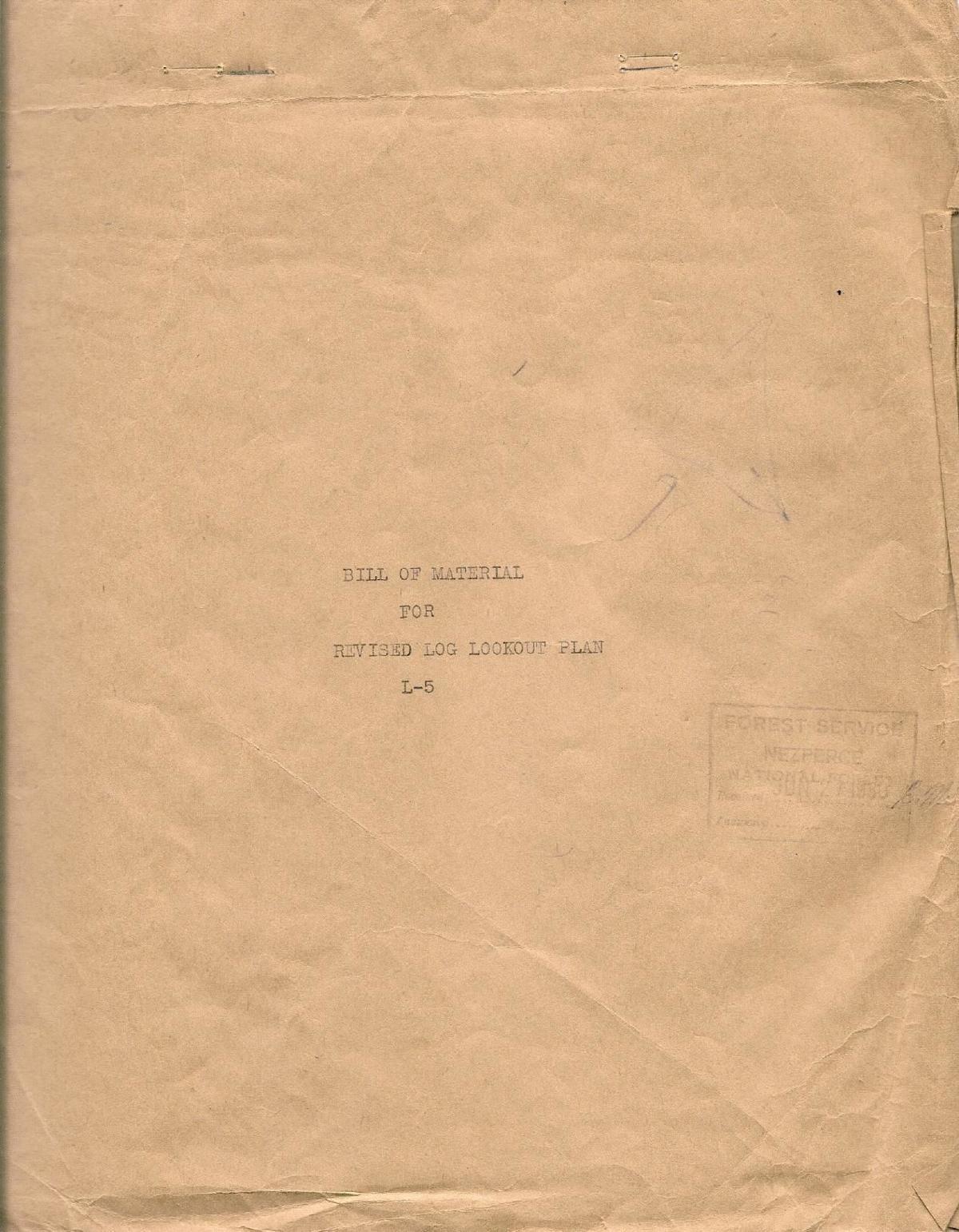 This year is the first phase in a three-part restoration project for the Skookum Butte lookout, which could be eligible to be listed on the National Register of Historic Places and already is on the National Historic Lookout Register.

The plan calls for repairing and stabilizing the rock foundation; replacing severely checked or rotten logs; re-roofing with cedar shingles; replacing the chimney jack, stovepipe and stove; and replacing the ridge flashing to prevent moisture from seeping in.

It’s being funded with a $20,000 Heritage Stewardship Enhancement grant, a $500 Forest Fire Lookout Association grant, and an estimated $14,570 in-kind contribution from Passport in Time volunteers.

The Skookum Butte fire lookout, perched on a pile of pancake-like and tumbled talus rocks, is getting a facelift.