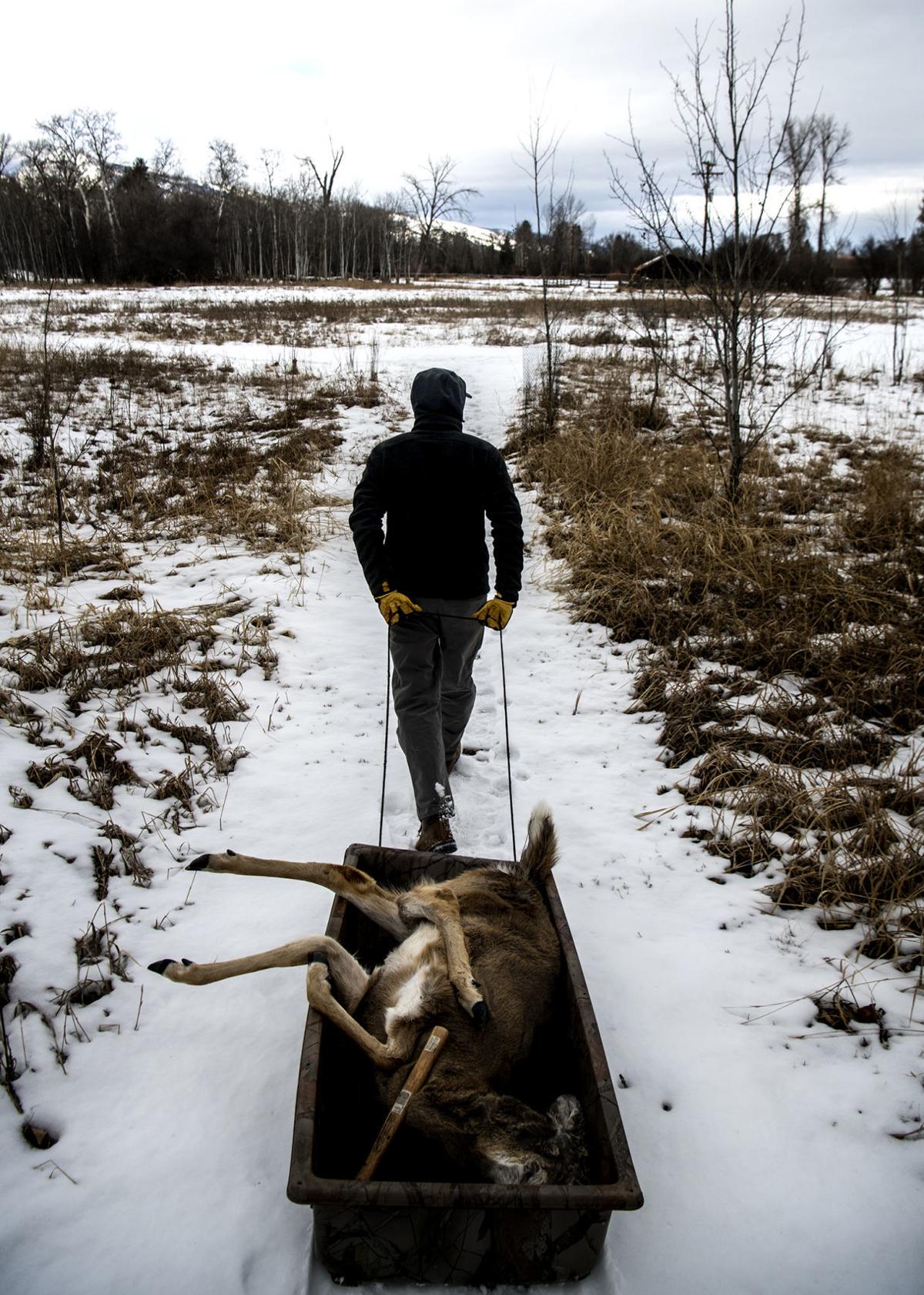 Eric Rasmussen drags a deer carcass to a plot of land used to observe eagles in Florence on Tuesday afternoon. The Raptor View Research Institute, which operates out of the MPG Ranch, baits and captures eagles to tag them and observe levels of lead in their blood. 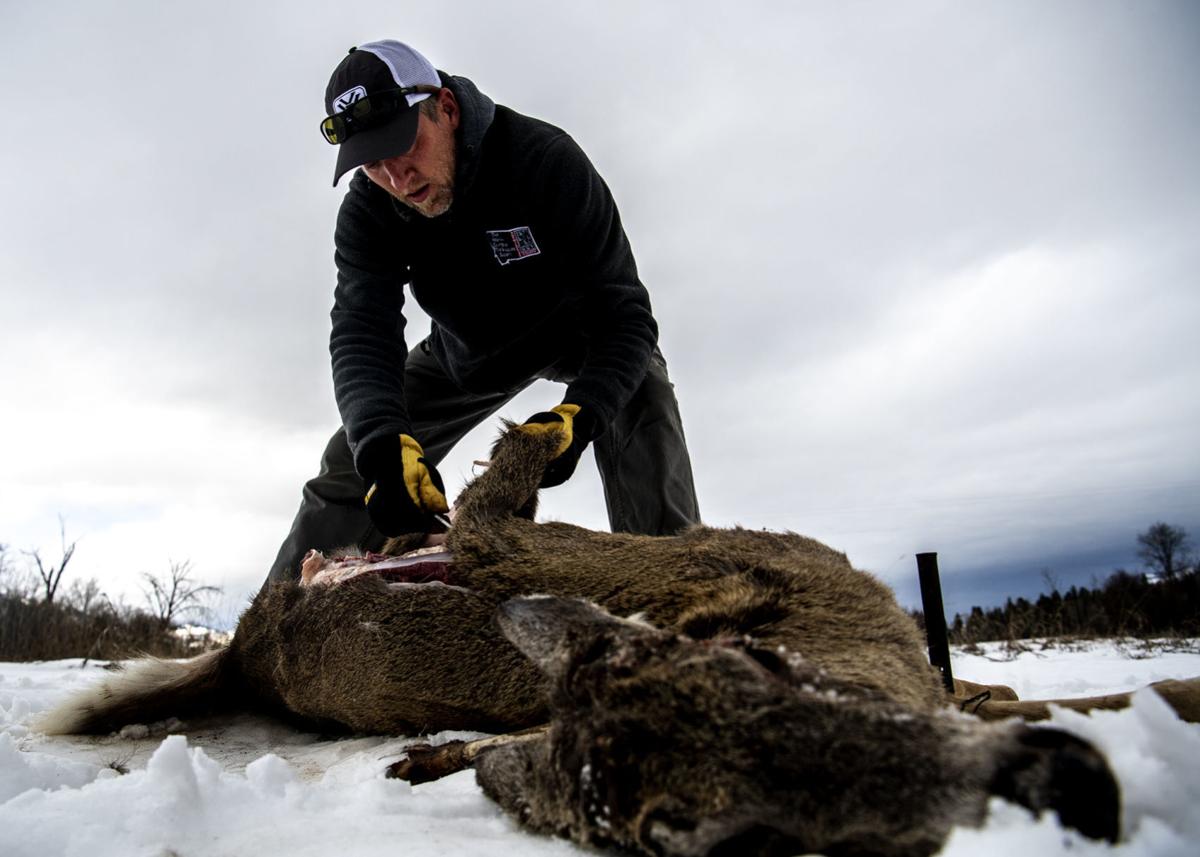 The group has been working in the Bitterroot since 2004, though their efforts to study eagles began in 2011. Rasmussen has been with the group since its inception.

FLORENCE — Rob Domenech stared at his laptop. The bird was nearly in hand.

“My heart’s pounding,” he said. While deer hunters experience “buck fever,” Domenech, the executive director of the Raptor View Research Institute, is prone to “eagle fever.” It hit Tuesday morning, when a golden eagle descended to one of the three baited game cameras on MPG Ranch.

The ranch, the Raptor View Research Institute and Bitterroot Audubon Society have used these cameras for the past nine winters, studying the eagles that make the Bitterroot their winter home. With some of the cameras, researchers just aim to track and observe. But with this one, they aimed to capture and study.

While the eagle pecked at a deer carcass, a team of researchers was closing in, ready to trigger a trap that would shoot a net over the eagle. With a 70% success rate, Domenech said, “it’s a very effective way of winter trapping.” But even so, “there’s a myriad of things that can go wrong.”

That much became clear seconds later. The bird’s wings jerked over the carcass and off camera. Domenech groaned.

“Nothing went wrong, everything went exactly as it supposed to, we just got unlucky,” technician Mary Scofield said when she had returned to the researchers’ base, a house overlooking the Bitterroot Valley. “It got covered by the net, but not fully. … (It) kind of swam out from underneath.

“It's kind of boom and bust,” she said. “Sometimes you get a lot of activity, and sometimes you go a week in between getting a bird, so it just kind of depends on a lot of things.”

Frustrating though it may be, this pursuit of eagles has revealed new details about their place in the Bitterroot’s winter ecology. The Raptor View Research Institute had been working in the area since 2004; they’ve outfitted more than 400 birds with leg bands that let their motions be tracked from year to year.

A captured eagle can offer up plenty of data, Domenech said. “With every eagle we capture, if it's an adult eagle, we put a transmitter on it.” Those are too expensive to put on every bird, he said but “every eagle, we draw a blood sample, [and] we band it” with a serial-number leg band. Golden eagles also get wing tags with the serial numbers.

Once the birds are released, these accessories “allow us to get re-sightings” of the same bird over time. And birdwatchers who spot the researchers’ tags have called in from far and wide. “We get tag encounters from central Mexico on up to the Brooks Range in Alaska,” he said.

Mapping them out has deepened researchers’ understanding of how and why they move. One bird they tagged in Montana is now up in Alaska — possibly to take advantage of a booming snowshoe hare population. “So that bird made an adjustment” in its movements, he said. “I used to think of them as completely hard-wired. … While that may be true to a point, it shows they have a certain plasticity, or they can adapt and change.”

They can’t, however, evade all the threats humanity throws at them. “When we talk about lead exposure for these birds we found that over 90% of the birds we sampled have elevated lead levels,” mainly from ammunition fragments left behind in game animals’ entrails.

They face a range of other threats, he continued, from poaching to vehicle collisions. While eagle recovery is often considered a conservation success story, the western United States golden eagle population is now projected to trend down in coming decades. “I think there's a misconception that eagles in general are doing well.”

To gauge their health year-round, the Bitterroot Valley Winter Eagle Project currently has three camera stations on the MPG Ranch, all equipped with traps. There are about 12 other camera-only stations around the valley.

It’s been a bit slow this season, said ecologist Kate Stone, as the project’s bait of choice — roadkill deer — is in short supply. “But even so, we're getting re-sights almost every time we go out to check a camera or get a day in the field,” she said.

After Tuesday morning’s disappointment, field biologist Eric Rasmussen went out to restock one of the sites.

Parking his truck on the driveway of Bill and Barb Samsoe — two of the many private landowners with whom they partner — Rasmussen dragged one of the deer carcasses to their trap: two stakes driven into the ground, with a camera strapped to a nearby stump.

“This is the fun part,” he said, cutting into its hind quarters, slicing a seam down its spine, and peeling the hide back to present the guts to the sky.

Now, all they could do was wait — not for long, Rasmussen and his colleagues hoped.

POTOMAC — Jesse Varnado cradled his patient with both hands as he carried it into the Wild Skies Raptor Center’s “ICU.”

A one-eyed hawk that went missing after a weekend windstorm knocked over its enclosure at a rehabilitation facility in western Montana has been found safe.

Eric Rasmussen drags a deer carcass to a plot of land used to observe eagles in Florence on Tuesday afternoon. The Raptor View Research Institute, which operates out of the MPG Ranch, baits and captures eagles to tag them and observe levels of lead in their blood.

The group has been working in the Bitterroot since 2004, though their efforts to study eagles began in 2011. Rasmussen has been with the group since its inception.