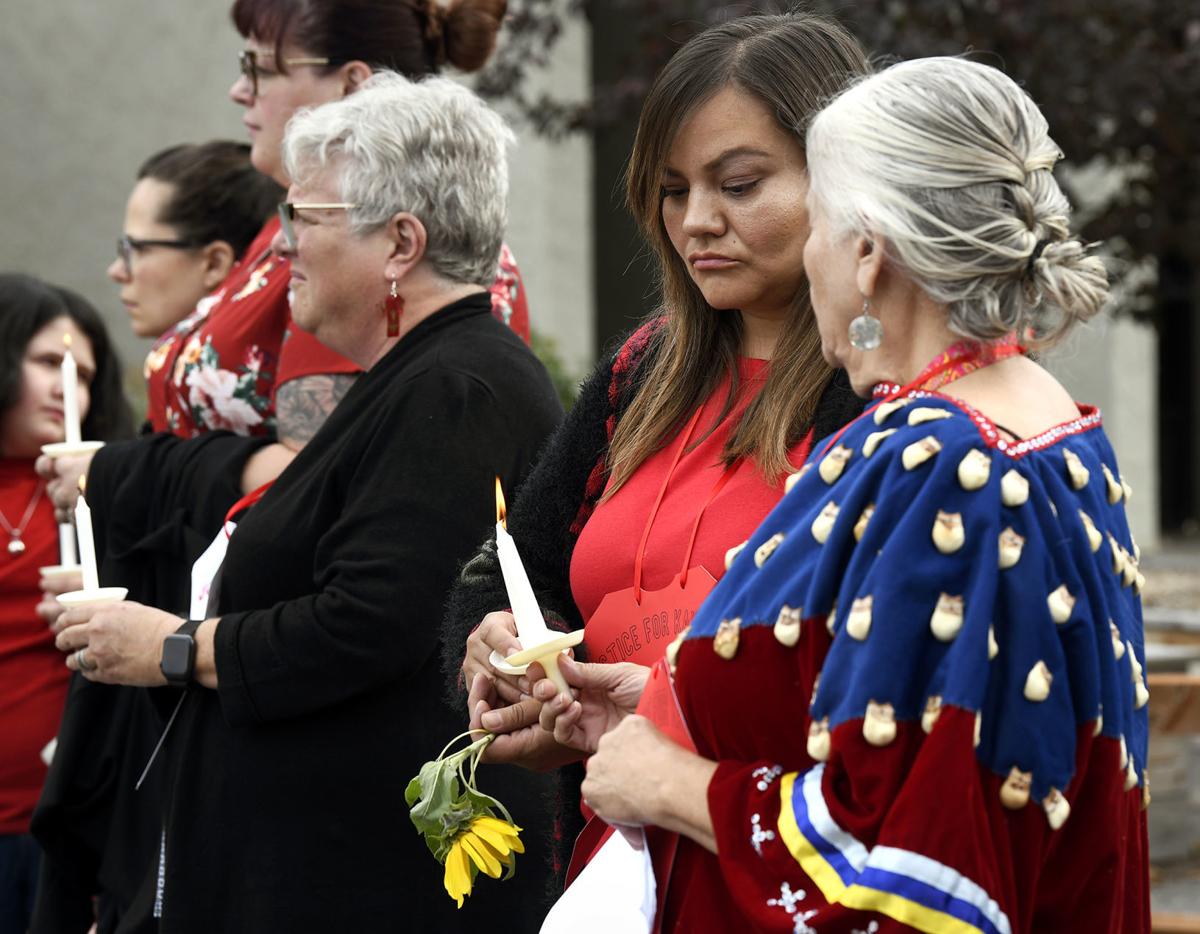 Anya Means, second from right, lights a candle with her mother Dixie Garfield during a vigil for their niece and granddaughter Kaysera Stops Pretty Places outside the Missoula Urban Indian Health Center on Monday. Stops Pretty Places, who had attended high school at Hellgate High and in eastern Montana, was found dead in Hardin in August, and her death remains under investigation. 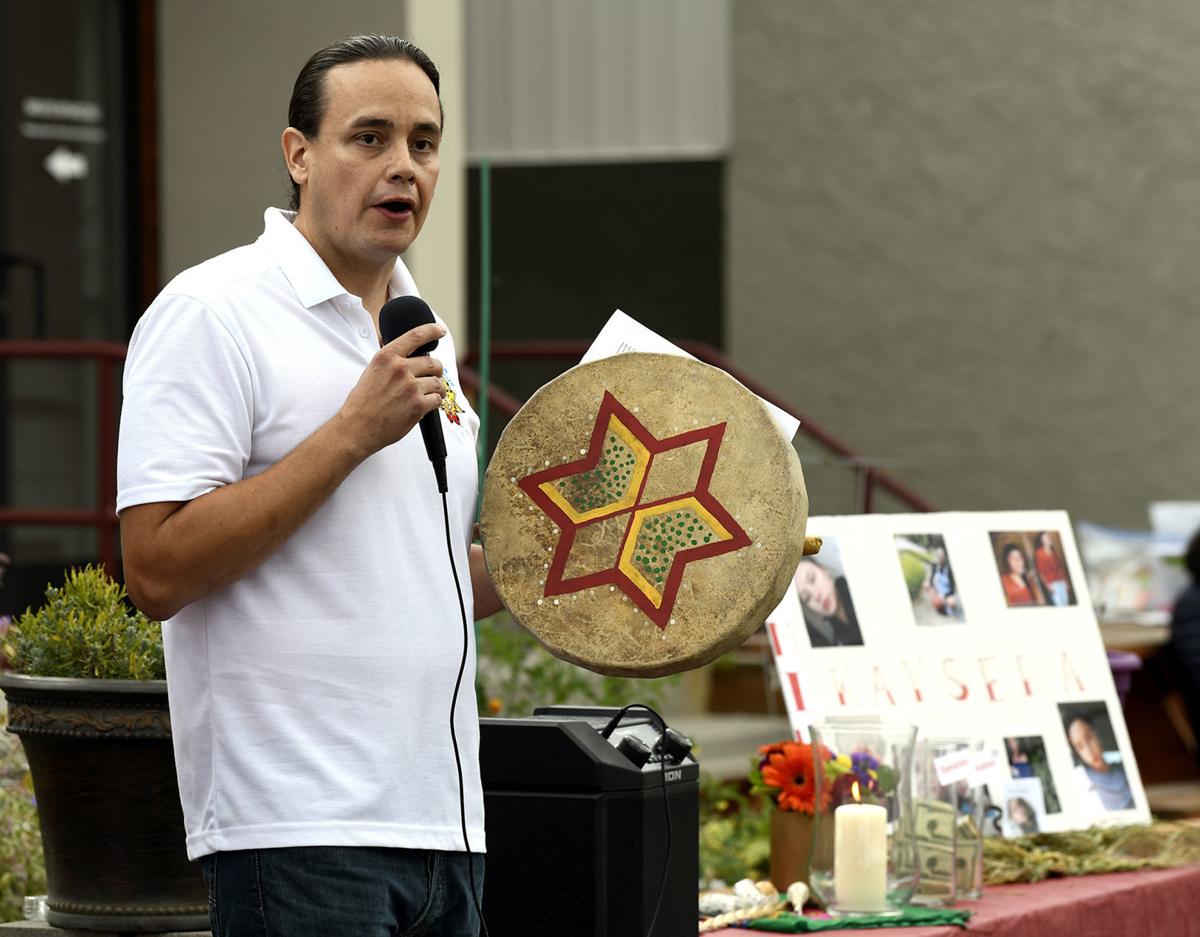 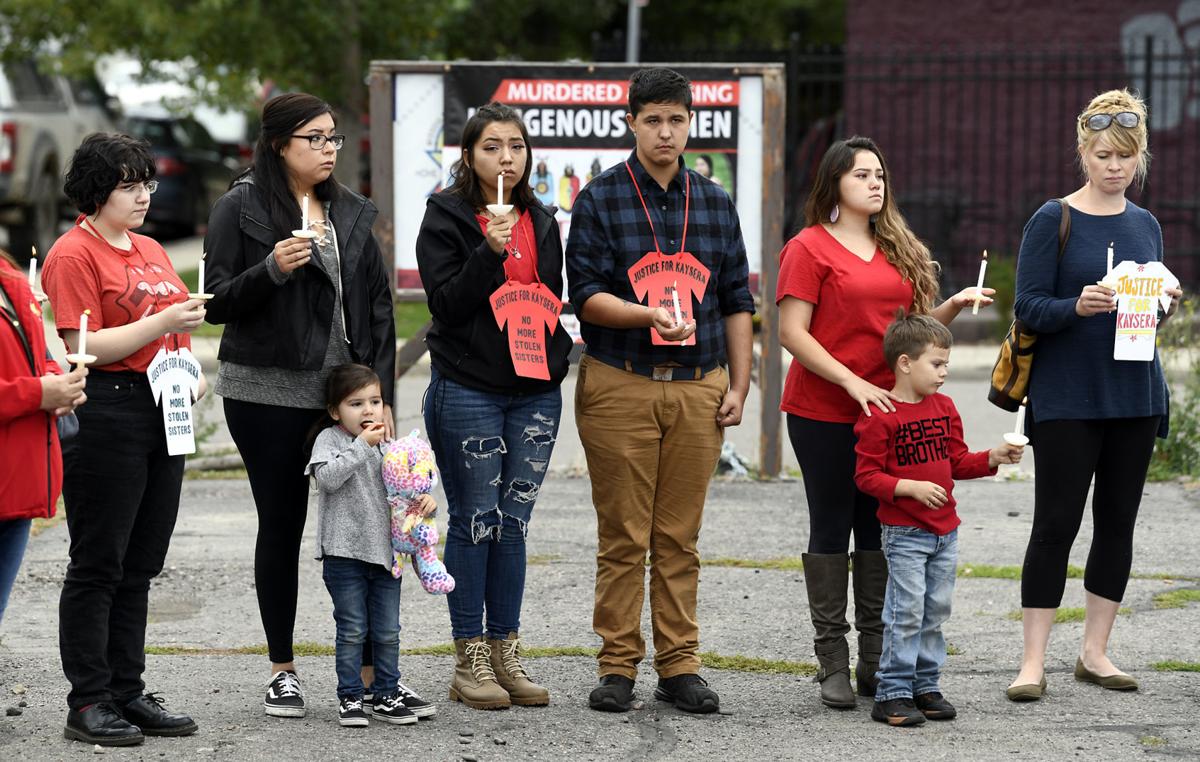 Means had been close to Stops Pretty Places after she was born in 2001, but as the years went by, their meetings became fewer and farther between. Then, one day in late July or early August this year, “I was watering out here, in the garden boxes just right outside of the Indian Center here, and I hear 'Hi, Uncle!' and I look up and I see Kaysera.”

She had just happened to ride her bike past the Missoula Urban Indian Health Center, where Means works. “She was very excited, and so was I,” he remembered. “... She was exactly the same as I remembered, just a young lady now, still gorgeous as ever, happy and with a joyful spirit.”

Means shared that memory with about 50 people in the Indian Health Center’s parking lot Monday. They had gathered, beneath a leaden sky, for a candlelight vigil honoring Stops Pretty Places. The 18-year-old Crow Tribe member was found dead in Hardin last month, and her loved ones congregated there and in Missoula on Monday to demand answers.

“We are imploring the Big Horn County authorities to do something to find out what happened to Kaysera,” said her grandmother, Dixie Garfield, at the Missoula gathering. She echoed Means’s description of a vibrant, mature young woman, who had attended high school at Hellgate and in eastern Montana as she lived with various family members, participating in sports and taking an active role in those communities. Through it all, Garfield said, she was mindful of her safety.

“She was determined not to put herself into dangerous situations, and I saw her making wise choices in this regard,” Garfield said.

And yet, in late August, she went missing. A body was found Aug. 29 in Hardin, where she was living at the time. The remains were confirmed as Stops Pretty Places’ on Sept. 11. Last week, the Billings Gazette reported the matter remains under investigation by the Big Horn County Sheriff’s Office, and no charges had been filed.

Grim stories and gatherings like these have been a recurrence across Montana this past year. Native American women suffer violence at rates far higher than the national average. Families who try to have these cases investigated often recall indifference from law enforcement, little time or effort devoted to the search, and confusion over which tribal, federal or local agency should have jurisdiction.

As activists recently have pressed the issue of missing and murdered indigenous people, they scored some victories. Earlier this year, Montana lawmakers passed the Looping In Native Communities Act, which created a task force to identify and break down jurisdictional barriers between law enforcement; House Bill 54, which clarified when law enforcement must file a missing-persons report; and Hanna’s Act, which created a missing-persons specialist position within the Montana Department of Justice.

But for all these new laws, Stops Pretty Places’ family had few good things to say about the handling of her case. “We thought there was a lot of progress made,” said Garfield. “... I was mistaken.”

Speaking to the vigil participants, and with reporters afterward, Garfield, Q.J. Means, and Stops Pretty Places' aunt, Anya Means, voiced frustration with the time the Big Horn County Sheriff’s Office took to notify them and the public about new developments in the case. The Sheriff's Office referred the Missoulian to Big Horn County Attorney Jay Harris, who did not respond to a request for comment Monday.

As this investigation moves forward, Stops Pretty Places' family and friends have taken matters into their own hands. They organized events in both Hardin and Missoula, where Stops Pretty Places had lived, and posted a $5,000 reward for information leading to an arrest and conviction in the case. They’re also collecting donations for a private investigator and future rallies on a GoFundMe page, “Justice for Kaysera Stops Pretty Places.”

According to data gathered by the Sovereign Bodies Institute, or SBI, this is the 27th known case of a missing or murdered indigenous woman in Big Horn County, and the 134th in Montana, since 1900. SBI describes itself as "a home for generating new knowledge and understandings" for how indigenous people are affected by gender and sexual violence.

Those concerned about this trend don’t just need to resolve this case, the health center’s executive director, D’Shane Barrett, told the group; they need to keep this tally from growing.

“The message of this movement needs to change,” he said, calling for a greater focus on prevention. “Enough is enough.”

'The dead cannot cry out for justice': Blackfeet seek solutions to murders, disappearances

The Missoula Urban Indian Health Center has won a highly-competitive $450,000 federal grant to address human and sex trafficking among America…

Anya Means, second from right, lights a candle with her mother Dixie Garfield during a vigil for their niece and granddaughter Kaysera Stops Pretty Places outside the Missoula Urban Indian Health Center on Monday. Stops Pretty Places, who had attended high school at Hellgate High and in eastern Montana, was found dead in Hardin in August, and her death remains under investigation.