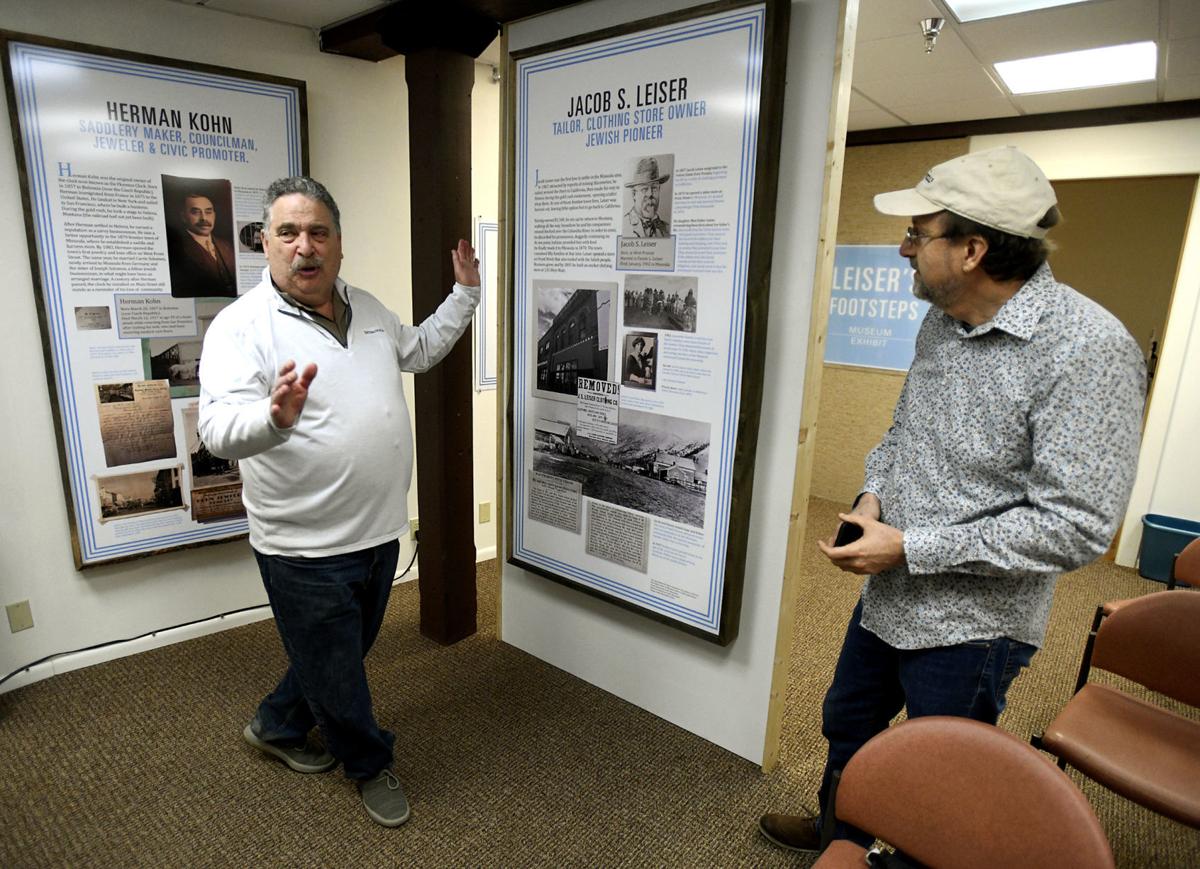 Bert Chessin, left, and Paul Kingsford talk Wednesday about their exhibit, "Leiser's Footsteps," at the Historical Museum at Fort Missoula. The exhibit tells stories of Missoula's original Jewish citizens and their contributions to the community. 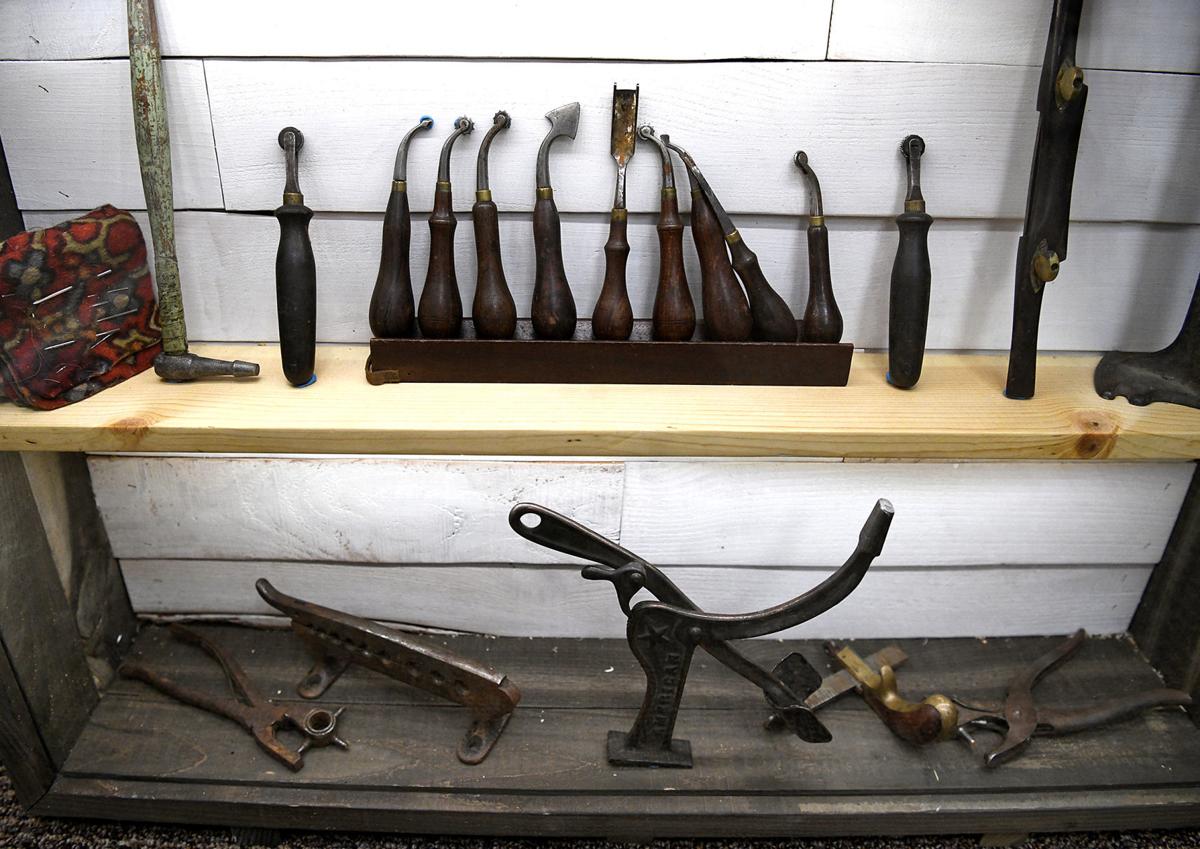 Included in the "Leiser's Footsteps" exhibit are leather-working tools that belonged to Herman Kohn, who opened a saddle shop in Missoula in 1879 and later a jewelry store in the Florence Hotel.

The fact that he was Jewish probably had little to do with Jacob Leiser’s decision to come to Missoula in 1870.

“At that time it was probably partly driven by gold,” Paul Kingsford said Wednesday.

Leiser was born in the early 1840s in West Prussia, now part of Poland, and he was a teenager when he arrived in the United States in 1857.

After his merchant tailoring business burned in one of Helena’s frequent fires, Leiser started anew in a fledgling Missoula that was awash in the recent Cedar Creek gold strikes 50 miles to the west.

If the impassioned and ongoing research of Bert Chessin and Kingsford is correct, and chances are good it is, Leiser became the first Jew to settle in Missoula.

Chessin and Kingsford, members of Missoula’s Har Shalom Jewish community, don’t know exactly when in 1870 he arrived. If they did they might build a special 150th anniversary event around the namesake of their exhibit at the Historical Museum at Fort Missoula.

“Leiser’s Footsteps,” on display through May 10, relates an under-told story of Missoula’s original Jewish citizens and their contributions to Missoula’s growth and culture.

Fiedler was a cornerstone of the Missoula Jewish community from the early 1940s to the mid-1960s. He was a literary critic, author and professor of English, and known as a national voice of Jewish intellectuals.

Ephron, who died in Missoula in 1992, was an internationally recognized classical Greek and Latin scholar and code cracker who, according to his panel, “solved two confounding archaeological mysteries without stirring from his basement study on Woodworth Avenue.”

Their individual stories suggest a broader range of topics, including the 19th century Jewish immigration to the United States from Central and Eastern Europe, and the relationships between Native tribes and Jewish merchants in the United States.

“Missoula is very much a reflection of the larger picture of what happened” elsewhere, said Chessin, the research director for “Leiser’s Footsteps.”

A Missoula native, Chessin is himself a member of an important Jewish family. His late father Meyer “Mike” Chessin was a New York-born botanist who taught for 41 years at the University of Montana and was a lifelong public welfare activist. Florence “Flo” Chessin was co-founder of Missoula Women for Peace 50 years ago.

Bert Chessin, a board member at Har Shalom and former president of the board, has been collecting stories and artifacts from the local Jewish community since he moved home from North Carolina 13 years ago to help care for his parents.

He hatched the idea of uncovering Missoula’s Jewish history in late 2018 when Missoula was wrestling with its responses to anti-Semitic flyers and graffiti that appeared around town.

With the support of Har Shalom and Rabbi Laurie Franklin, Chessin and Kingsford set out on a quest that includes, in addition to the museum exhibit, an ever-growing website, Bearboneshistorians.org, and plans for a larger project encompassing the Jewish history of Montana.

“We wanted to set the record straight,” the exhibit introduction said.  “To do that, we focused on the lives of remarkable Jews from Missoula. In telling these stories, we revealed how each in their own special way helped make their communities and new home country a better place.”

The exhibit in a rougher form was displayed to good reviews last fall downstairs in the Hammond Arcade on Higgins Avenue.

Jacob Leiser married Fannie Lebensberger, a Jewish woman from Deer Lodge, and in 1892 built what the Morning Missoulian referred to as “the New and Elegant Leiser Block” on West Main.

“He did not become wealthy as wealth is considered these days but by prudence and economy he acquired sufficient of this world’s good to enable him to live and to support his family in comfort,” the Missoulian eulogized upon Leiser’s death in 1902.

Many of the Leiser stories came from daughter Esther, who aided librarian Sue Rhinehart when the first Missoula Public Library opened in the Higgins Building in 1894. Later she was reference librarian at the library on Pattee Street, today’s Missoula Art Museum, for 25 years before retiring in 1945.

“The new public library wants this exhibit in the fall after they open,” Chessin said. “It’s a lovely connection between Esther Leiser and her parents and the history of Missoula.”

Kohn arrived in 1879, opened a saddle shop and later had a jewelry store in the Florence Hotel. He invested heavily in Missoula properties and civic projects. Both he and Leiser integrated easily into the business community.

“One of the primary resources that kicked this up by order of magnitude was making contact with Herman Kohn’s great-granddaughters,” Chessin said.

Brenda Henry and Mary Paulson grew up in Missoula, left for other lives and have since moved back. Their mother was Mary Kohn Blastic, who passed down a treasure trove of Kohn family pictures.

“When I was invited to go see the family collection and started looking through photo albums, I was knocked off my feet by the photos they had that date back to the the 1890s,” Chessin said. “There were pictures of Salish gatherings, powwows, with both the Native folks and with the local white folks, particularly the Kohn family.”

The panels aren’t ready yet but by mid-March “Leiser’s Footsteps” will include stories of the Jewish-Salish connection. Featured will be three men who found their way into the Kohn photos — Eneas Big Sam, who witnessed the Hellgate Treaty negotiations in 1855; Bitterroot Jim Sapiye, an accomplished hunter and respected elder and leader, and Joe LaMoose (1845-1931), one of the Salish who met Chief Joseph and his band of Nez Perce in the Bitterroot  Valley on their 1877 flight from U.S. Army forces.

A century and a half after Leiser arrived, Missoula’s Jewish roots are flowering. Franklin, the longtime spiritual leader at Har Shalom, was ordained a rabbi last year, becoming the congregation's first person to make the journey from congregant to rabbi while living in Missoula. The city is home to two other rabbis. Rabbi Chezky Vogel and his wife Rochi of New York became co-directors of Chabad Jewish Center Missoula in November of 2018. Rabbi Mark Kula of Miami, whose wife Coreen Duffy is director of choirs at UM, lives in Missoula but as of last July has served Beth Shalom of Bozeman part-time.

Kingsford said people often come to a museum to learn about heroes and movie stars.

“But the real heroes of the United States are people like this,” he said. “They just happen to be Jewish in this case. They could be from anywhere, and it’s those stories that are kind of lost to history.”

Ted Hughes, curator of collections at the Fort Missoula museum, said he owes a debt of gratitude to Chessin and Kingsford for uncovering the history.

“It just reminds me that a lot of Missoula’s history is still out there in people’s homes,” Hughes said. “It’s a constant, ongoing process. You have to get out there and talk to people. It’s not all in the archives. It’s not all at the Mansfield Library.”

Missoula refugees are distressed by the Trump administration's cap of 18,000 refugee admittances this year, the lowest number since the federal program was established 40 years ago.

Unknown no longer: Stretch of U.S. 93 named for Louis Charlo

Bert Chessin, left, and Paul Kingsford talk Wednesday about their exhibit, "Leiser's Footsteps," at the Historical Museum at Fort Missoula. The exhibit tells stories of Missoula's original Jewish citizens and their contributions to the community.

Included in the "Leiser's Footsteps" exhibit are leather-working tools that belonged to Herman Kohn, who opened a saddle shop in Missoula in 1879 and later a jewelry store in the Florence Hotel.