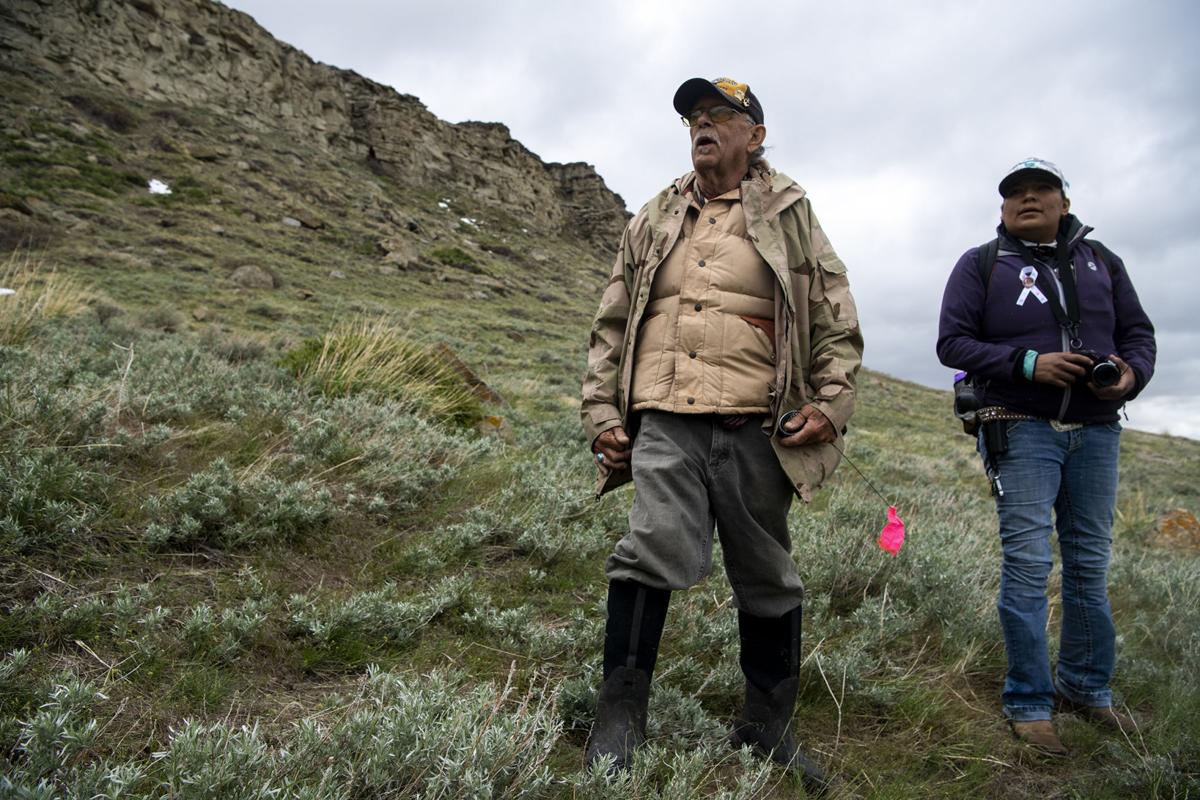 Pete W. Fuller, left, and Arbana Pepion, mother of missing 3-year-old Arden Pepion, have been searching for the young girl since her disappearance in April. 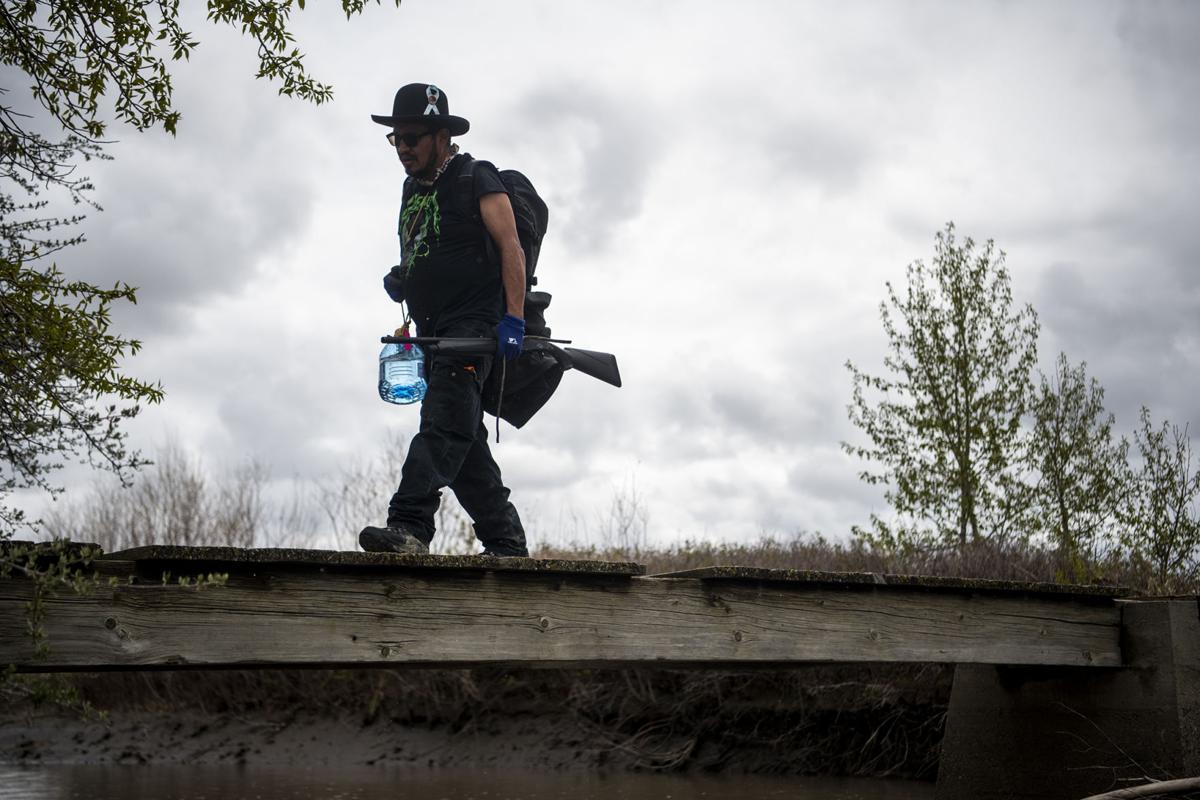 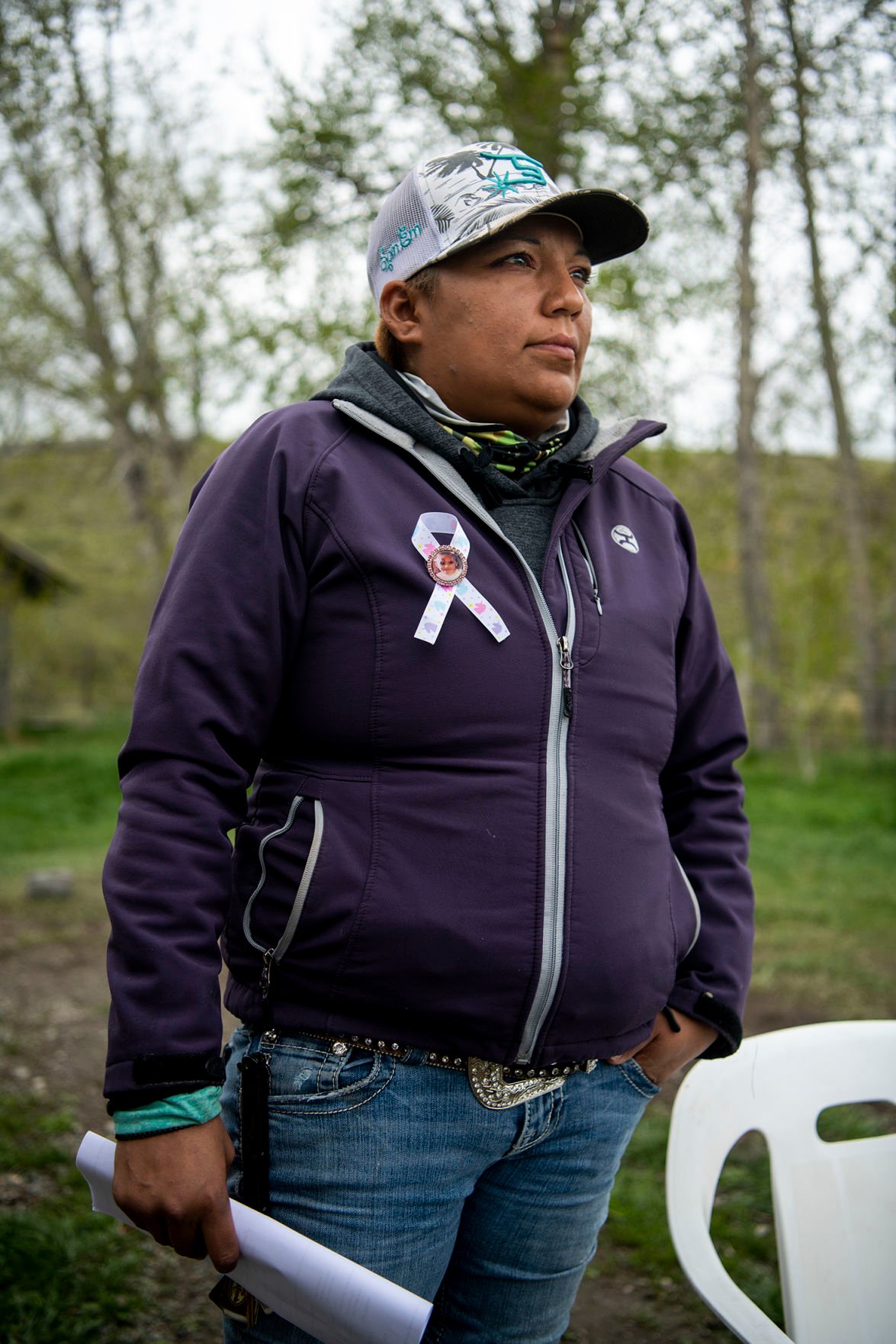 Arbana Pepion believes there should have been an Amber Alert issued regardless of the circumstances of her daughter's disappearance. “Give us some answers. Give us something to work with,” she said. “They haven’t.” 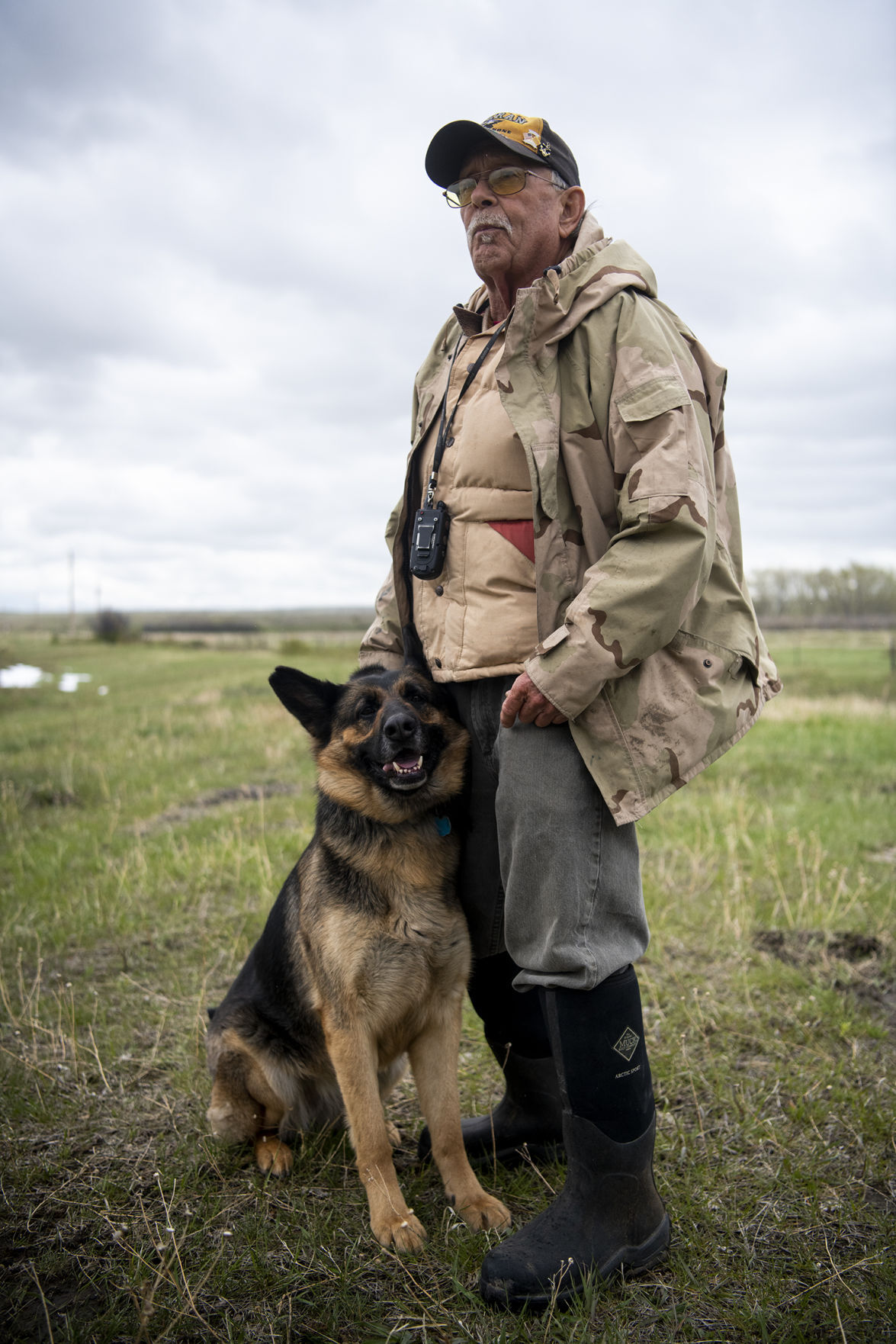 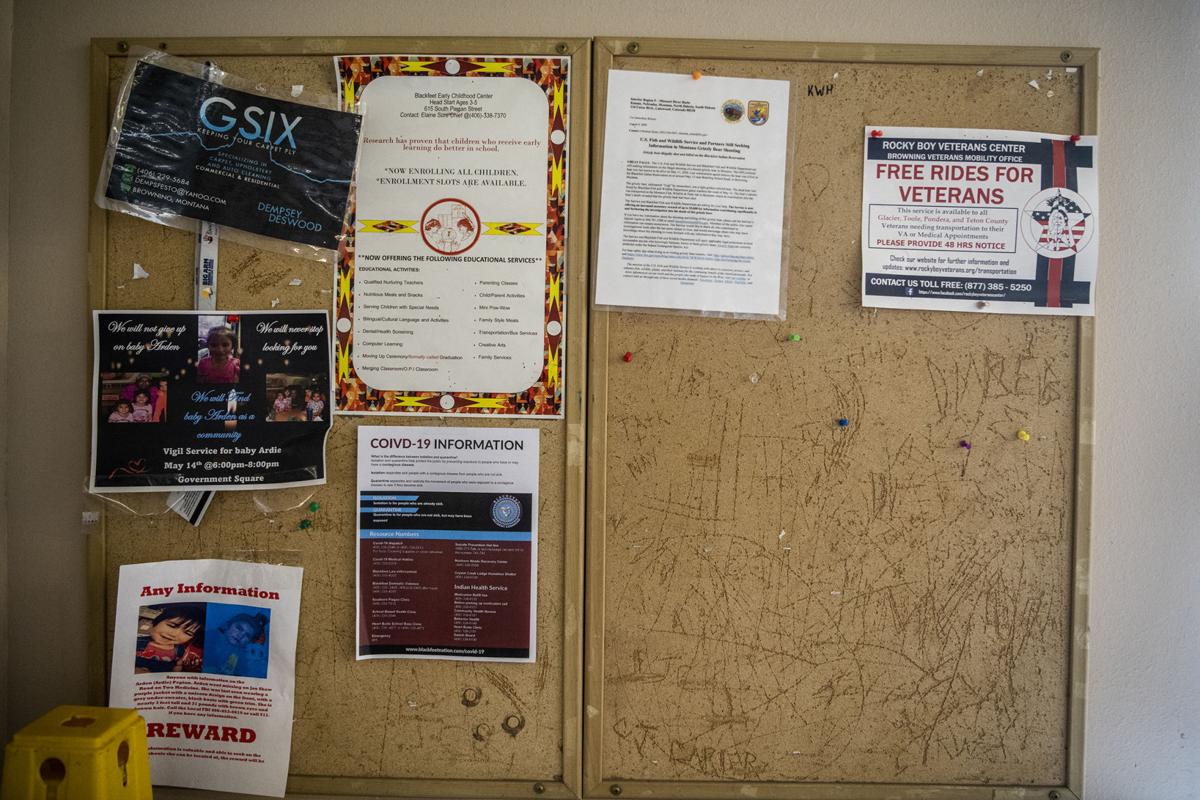 Posters for Arden Pepion are posted at local businesses in Browning. 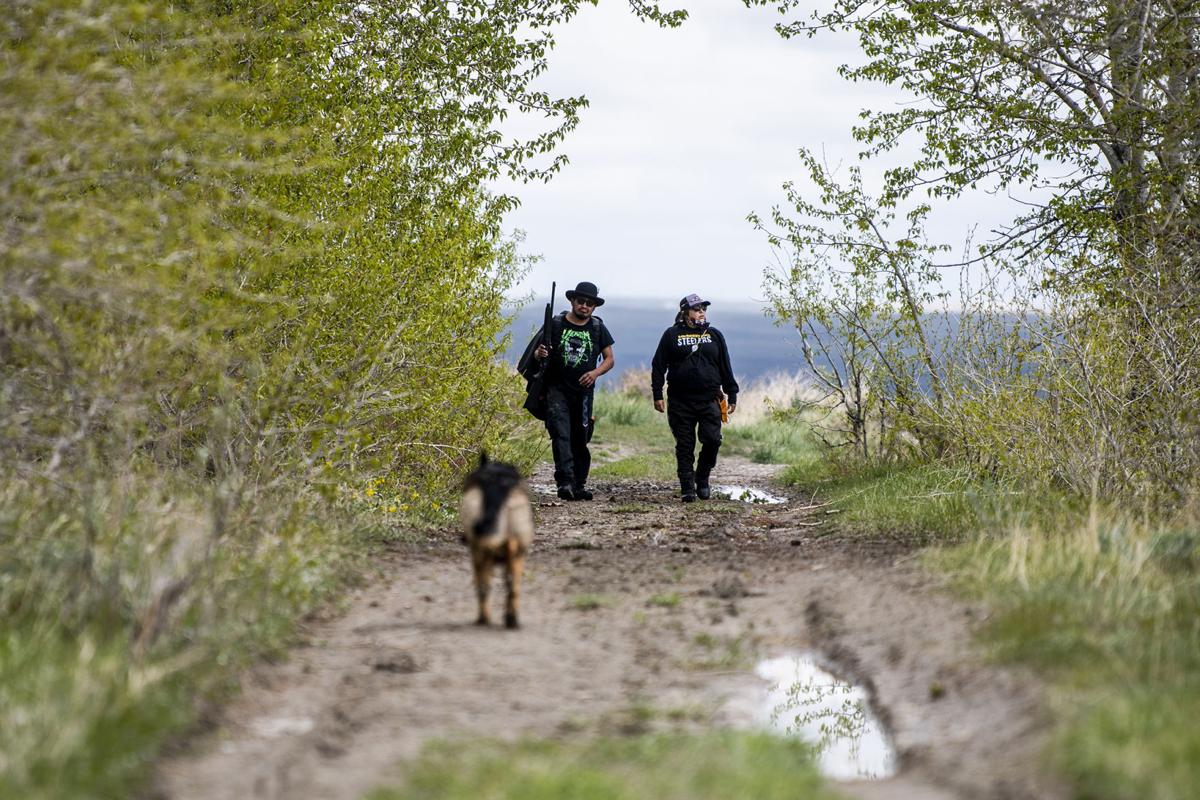 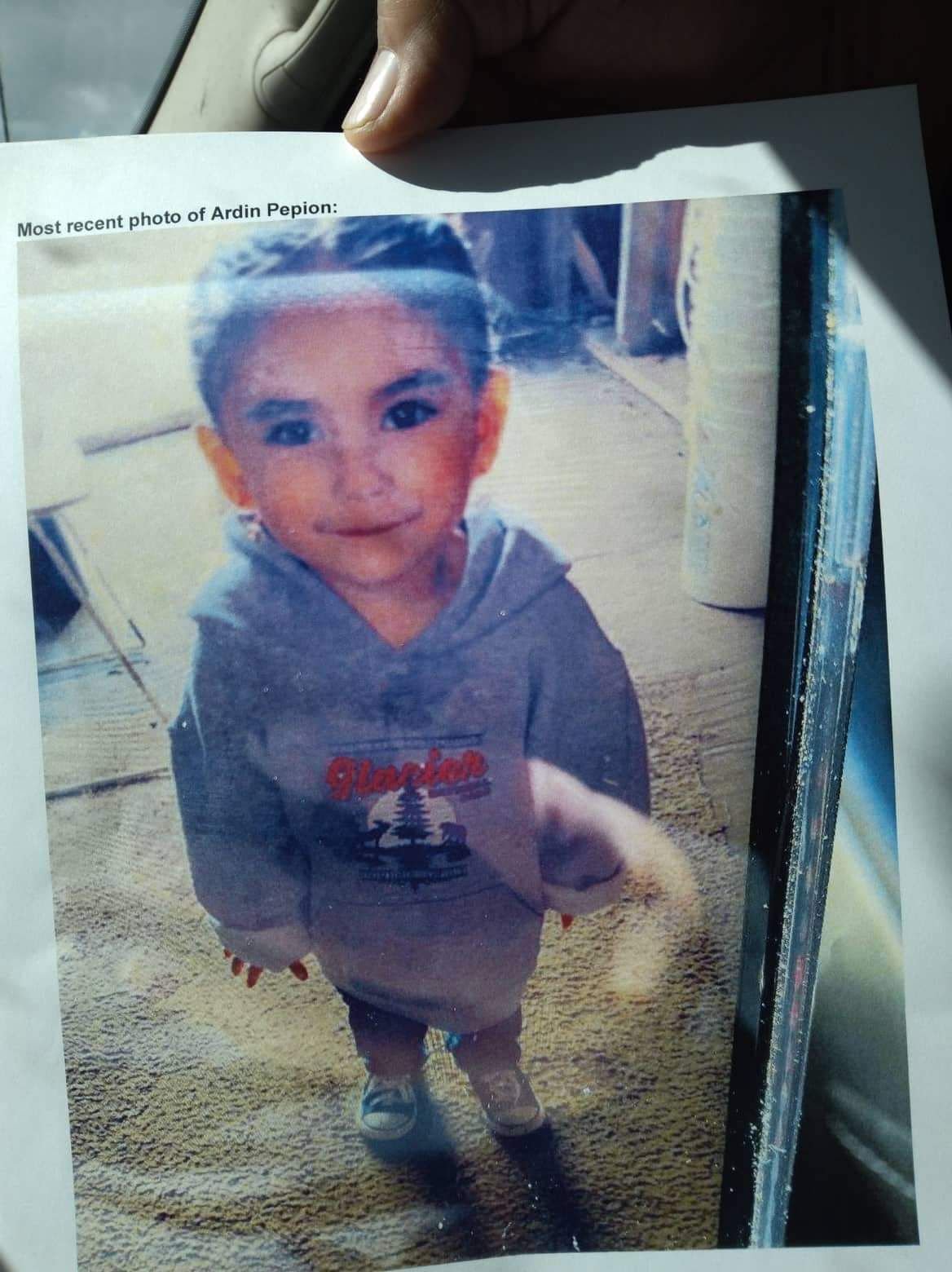 A photo of Arden Pepion, 3, in the outfit her family said she was wearing when she went missing.

Looking up at the cliffs stretching across the fields of the Blackfeet Reservation, Arbana Pepion recognized an eagle’s nest cradled in the rocks above.

She said she's seen her 3-year-old daughter, Arden, standing in the same nest in her dreams, guiding her somewhere.

“I want to get justice. I want answers,” Arbana said of her daughter's disappearance.

Earlier this week, a team from the Missoulian traveled to Browning to search alongside and interview the family members of Arden, who has been missing since April 22.

When Blackfeet Law Enforcement announced they were scaling back their search for Arden on May 1, her family began leading their own searches, hiring private investigative teams.

Over the past month, conflicting accounts of what happened to Arden and frustration with how local law enforcement has handled Arden’s disappearance have become prominent pillars of the case.

Evidence from searches and information from the family and law enforcement point in different directions.

On April 22, Arden was supposed to be in the care of Arbana’s mother. Instead, she was believed to be with a family friend who was not her guardian, Arbana said.

His name is HaHaax Vielle.

In a recent phone interview with the Missoulian, Vielle confirmed he was with Arden the night she went missing. The two of them had spent time together beforehand, and on the evening of April 22 had gone to the Two Medicine area near Joe Show East to hang out and so he could practice shooting, Vielle said.

“She had been with me before when I was shooting,” he added.

He noticed Arden was missing while he was reloading his gun, he said. After looking around, he saw footprints of hers leading toward the river starting about 40 to 50 yards from where the water was.

In a Thursday press conference, Blackfeet Law Enforcement spokesman Frank Goings confirmed there was a five- to six-hour gap between when Arden went missing and when it was reported to officials. Law enforcement responded immediately when contacted, he added.

Investigating officers found footprints believed to be Arden’s leading to the river in their initial searches, he said. On April 25, divers found a boot of Arden’s in the river.

Arden’s family and search teams are still unsure about what exactly happened to Arden.

Officials believe she drowned in the river, said Irene Pepion, Arden's paternal grandmother. She and Arbana think there is more to the story.

“I think if they found the boot, it seems like they should have found her body by now,” Irene said. “Where is she? Did she really go in the river?”

On May 1, Blackfeet Law Enforcement scaled back search efforts after less than two weeks. In the 10 days they had been investigating the area, they reported covering about 60 miles of land and river in the Two Medicine area.

The family was authorized to hire a private company to continue investigative efforts. Pete W. Fuller, owner of Kinto K-9 LLC, was brought on to help the search.

In the last few weeks, belongings of Arden's (separate from the boot found on April 25) were found by the private teams in wilderness areas a few miles away from the river, Arbana said.

The sweatshirt she was wearing when she went missing has not been found yet.

Arden was wearing a purple jacket with a unicorn design on the front when she went missing, according to news releases from Blackfeet Law Enforcement. Arden’s family has said that information is incorrect, and she instead was wearing a gray pullover sweater with the word “Glacier” printed across the front.

Fuller’s first day on the ground was Tuesday, May 18, he said. The following day, a second private company with drones was brought on to help.

Several of Arden’s family members have also spent days out looking in different areas to try to find her body or clothing items.

They have set up camps and have had help from volunteers. Support and donations from the local community have made continued search efforts for the family easier, Arbana said.

A GoFundMe link has been a source of support for the family's searches as well.

Fuller has spent the past few weeks searching the surrounding areas where Arden was last seen. He estimates having already covered dozens of miles spanning from the Two Medicine River to the canal and wilderness across the highway.

They have done grid searches for Arden, working in 500-foot circles in the Two Medicine area with one search and rescue dog and one cadaver dog, he said.

Weather conditions have posed some challenges to their efforts, Fuller said. Some days, they’ve been rained and snowed out, which makes accessing the area right around the river difficult. Weather also has impaired the dogs’ ability to smell things.

Because the area she went missing from is an active spot for wildlife, namely mountain lions and bears, the possibility of her being lost to a cat or bear is strong too, Fuller said.

Fuller and the family have asked for answers and tangible information from Blackfeet Law Enforcement to help in their private searches, but have been given nothing, Arbana said.

“We’d like more background. We’d like a better timeline,” Fuller said. “They have us chasing our tails.”

Arden’s parents were not notified of her disappearance, Arbana said. She found out through a family friend who sent her a web link to the announcement.

When officials called off the search on May 1, the family was again not directly notified, she said.

Thursday's press conference was the first public update on Arden's case since Blackfeet Law Enforcement called off searches on May 1.

Arden’s father, Aaron Pepion, points to a lack of training and organization in rescue and recovery efforts by law enforcement as hindering the effectiveness of their searches. He feels the people brought in to do the initial investigation were not properly trained for the kind of search mission this case entailed.

“They might have good intentions, but they need better training,” Aaron said. “We want to bring her home. We want our daughter home.”

Arden’s family wishes an Amber Alert had been issued when she first went missing. Arbana thinks this would have helped raised awareness about her disappearance and possibly expedited the process of finding her.

In their Thursday press conference, Blackfeet Law Enforcement said they did not believe Arden was abducted and her case did not meet the criteria for issuing an Amber Alert. They’re planning on resuming some search efforts in the coming days.

Blackfeet Law Enforcement did not return a request for comment from the Missoulian.

'Her own little personality'

Described by her family as vibrant and playful, Arden was known for putting a smile on the face of anyone she meets.

“She really has her own little personality,” Irene said.

An avid lover of music, Arden was always bouncing around and finding new songs to dance to. When she wasn't at her preschool or with friends, she could be found trying to learn new TikTok dances with her older sisters, Alexis, Maxine and Maddie.

Arden was obsessed with anything related to the Disney movie "Frozen" and loved its music.

“Ever since she was a baby she always, always listened to music,” Arbana said. “She was really bright for her age.”

Arbana wishes Arden did not have to go missing for a light to be shed on the Blackfeet community’s missing and murdered Indigenous persons rates, and hopes her daughter's case can serve as an example in the future.

The family and the private search companies plan to continue looking for answers until something more concrete has been found.

“I’m not going to give up,” Arbana said.

Pepion was last seen on April 22 in the surrounding areas of Joe Show East off U.S. Highway 89 South on the Blackfeet Reservation. She had been missing for between five and six hours before officials were contacted.

Brandon James Blackgoat, 22, appealed his case to the Montana Supreme Court on April 29. He was sentenced earlier this year to a total of 105 years in the Montana State Prison.

William H. Clarke, 77, was given a six-year deferred sentence for one felony charge of assault with a weapon.

Marcus Rubin Campos, 20, has been charged with two counts of criminal endangerment, a felony, and one count of driving with a suspended or revoked license, a misdemeanor.

Man pleads not guilty to robbing Blackjack Pizza in February

Thomas Scott Cockrill, 49, was arraigned on May 24 in U.S. District Court.

The names of the people arrested have not been released by law enforcement.

Pete W. Fuller, left, and Arbana Pepion, mother of missing 3-year-old Arden Pepion, have been searching for the young girl since her disappearance in April.

Arbana Pepion believes there should have been an Amber Alert issued regardless of the circumstances of her daughter's disappearance. “Give us some answers. Give us something to work with,” she said. “They haven’t.”

Posters for Arden Pepion are posted at local businesses in Browning.

A photo of Arden Pepion, 3, in the outfit her family said she was wearing when she went missing.