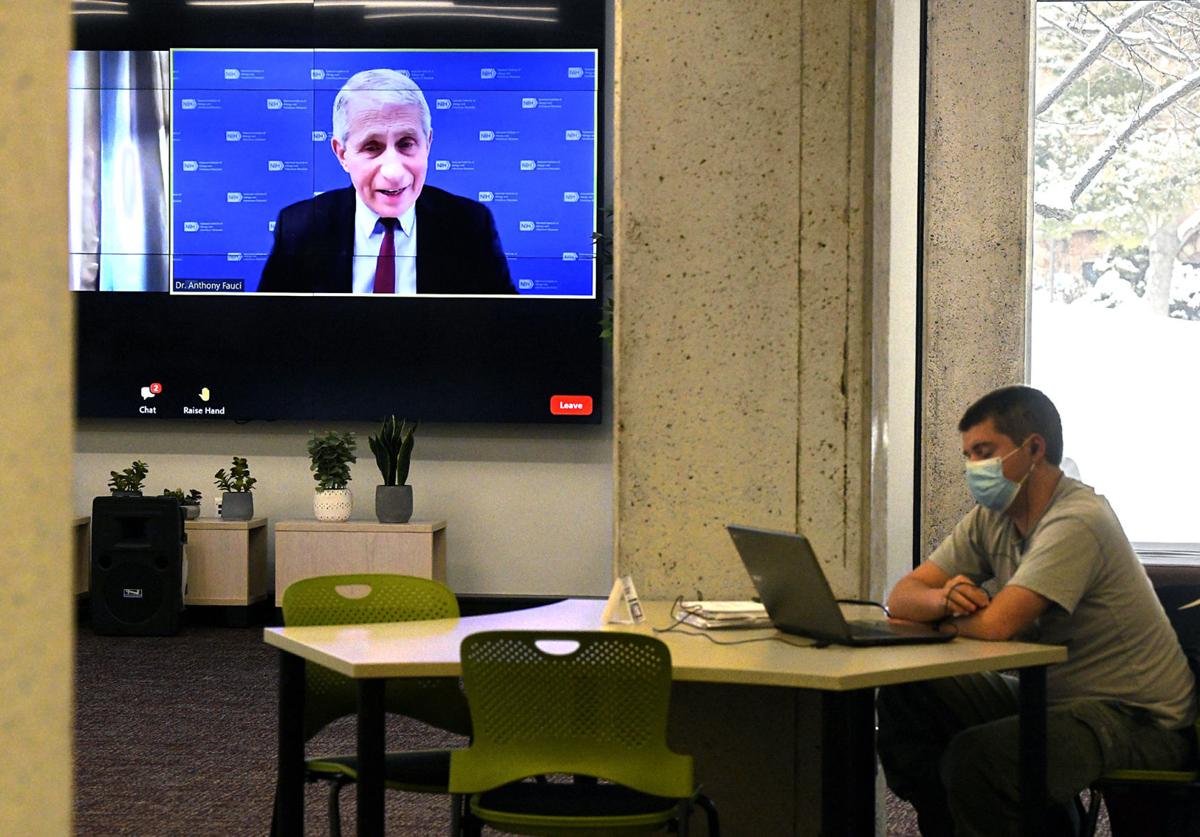 Dr. Anthony Fauci, the nation's top COVID-19 adviser and director of the National Institute of Allergy and Infectious Diseases, said during a Mansfield Zoom conversation that he thinks vaccinations of the country's population may return the U.S. to "a degree of normality" by mid-fall. 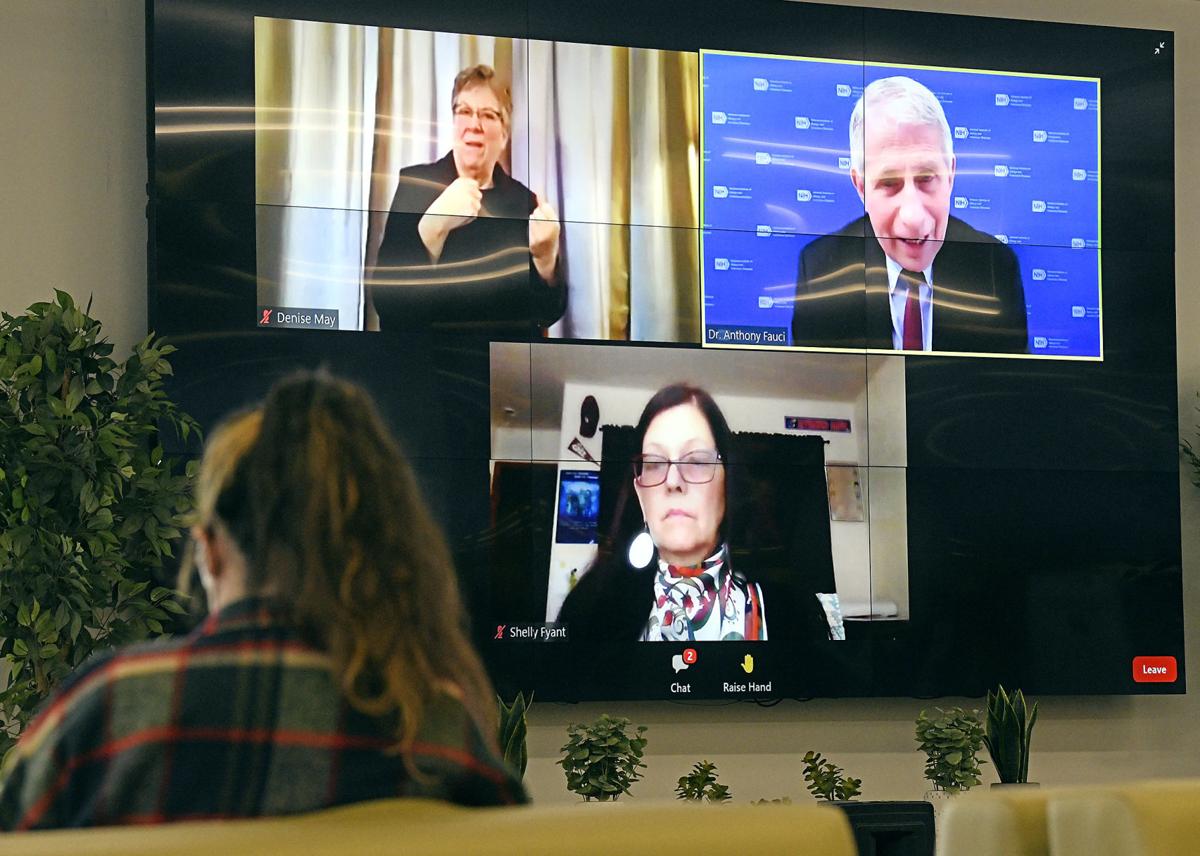 Dr. Anthony Fauci responds to a question from Shelly Fyant, chairwoman of the Confederated Salish and Kootenai Tribes’ Tribal Council, shown at the bottom of a screen in the UM library on Wednesday.

Dr. Anthony Fauci said the words many people have been waiting to hear when he called the COVID-19 vaccine the "light at the end of the tunnel" during the University of Montana’s annual Mansfield Lecture on Wednesday. But the pace at which the nation approaches the end of the pandemic depends on how many people get vaccinated, he said.

In a Zoom conversation hosted by the Mansfield Center and attended by more than 6,000 people on Wednesday, Dr. Fauci, the nation’s top adviser on the COVID-19 pandemic response and director of the National Institute of Allergy and Infectious Diseases, said he thinks the United States will approach "a degree of normality" by mid-fall or sooner "if we could get past this issue of vaccine hesitancy where a significant number of people may not want to get vaccinated."

Fauci said that 70% to 85% of the nation's population will need to be vaccinated before things can return to "normal," which will include activities like going to the movies, in-person classes and dining at restaurants — even if face masks and social distancing are still required at times.

In the conversation moderated by Robert Saldin, director of ethics and public affairs for the Mansfield Center, Fauci discussed the unprecedented pace with which the vaccine was developed, distribution challenges and ways to overcome skepticism. Saldin said more than 400 questions were submitted in advance by attendees, which the Mansfield Center whittled down based on common themes.

"A little bit more of our focus is addressing some of the issues that affect us here in Montana and on the reservations and in rural areas of the state," Saldin said ahead of the talk. "Some of the things that just don't get quite as much attention in the national media."

Kaylee Kronsperger, an undergraduate student here at the University of Montana studying human biological sciences, asked what can be done to address vaccine skepticism that she has encountered in rural Montana, including her hometown of Eureka.

Fauci said that rather than being hypercritical of people's skepticism, it's important to respect that skepticism and understand the reasons for it while also explaining the importance of the vaccine. By doing that, he said he hopes to "win over at least a portion of the people who have hesitancy." Common reasons for skepticism of the COVID-19 vaccine stem from it being new and the pace with which it was developed, he added.

Fauci, known to be efficient with his time down to scheduled bathroom breaks, used the discussion on Wednesday as an opportunity to explain how scientific advances allowed for the development of the vaccine in less than a year in a way that doesn't compromise safety or scientific integrity.

He said the U.S. National Institute of Health began working on developing a vaccine just five days after China released genetic data on COVID-19 in early January. Eleven months later, people were receiving the first doses of the vaccine with emergency authorization from the Food and Drug Administration. The rate at which the vaccine was developed would not have been possible 10 years ago when we didn't yet have advances that allowed researchers to understand the genetic sequences of the virus, Fauci said.

He also emphasized that the decision of whether or not the vaccine was safe and effective was made by an independent data and safety monitoring board, which is a group of vaccinologists, immunologists, virologists, statisticians, and people in the field of ethics, and is not beholden to the federal government or to pharmaceutical companies.

Fauci also addressed skepticism within the Native American population after Shelly Fyant, tribal chairwoman of the Confederated Salish and Kootenai Tribes of the Flathead Reservation, asked how tribal community members can be expected to trust a vaccine being sent by the federal government that has historically and systemically harmed Native Americans.

Fauci acknowledged that there is good reason for Native Americans, Hispanics and African Americans, among others, to be skeptical, but stressed that there are now ethical constraints such as institutional review boards and ethical guidelines. He also said overcoming resistance is key in those communities because of the disproportionate suffering due to COVID-19 that many minorities have experienced.

The pandemic has largely spared children of its worst consequences, but Fauci said it's also important to address an incorrect but widespread assumption that kids are basically immune from the virus.

Lisa Beard, an emergency room nurse at Community Medical Center in Missoula, and her 13-year-old son, Hudson, who contracted the virus a few months ago,  shared their experience on the call. Hudson, who was "an energetic, healthy, honor roll, soccer player seventh grader," has watched his health continue to decline since he contracted COVID-19 in November. Three months later, Hudson said he is living in constant pain with constant migraines, stomach pains, a racing heartbeat and vomiting. He asked Fauci if he could help him.

Fauci responded in earnest that he couldn't immediately help Hudson because health experts are still working to understand the condition, known as post-acute COVID syndrome.

During the discussion, Rocky Mountain Laboratories Associate Director for Science Management Marshall Bloom, one of Fauci's colleagues of over three decades, said Fauci has played a major role in the United States' response to a number of pandemics including HIV/AIDS, Ebola, West Nile virus, Zika and COVID-19.

Bloom noted Fauci's personal responsibility for the President's Emergency Plan for AIDS Relief in Africa under the George W. Bush administration, a program that has saved about 17 million lives. During the West African outbreak of Ebola virus, Fauci was one of the doctors who took care of the first patients with Ebola admitted to a hospital on the National Institutes of Health campus.

Fauci took a night call to render care to the patient in protective gear, and when asked why someone in his position would expose themselves to the virus, Fauci said that he wouldn't ask people who work for him to do something that he wouldn't do, according to Bloom.

Although he won’t be personally in Missoula for his lecture on Wednesday, Dr. Anthony Fauci’s Montana ties run much thicker than a Zoom call.

This week, a Missoula City Council committee approved an agreement to use Lowell Elementary School as a new community center and Missoula County commissioners approved zoning regulations for cryptocurrency operations.

The assessment is not meant to determine whether kids should be in kindergarten, but how educators can better serve them once they're there

A 30-year-old parrot named Hollywood will live in one of the fire stations for the foreseeable future as his owners recover from a house fire.

The Toole County Coroner’s office identified Thursday the two Missoula County men whose bodies were recovered from the Marias River.

Missoula County will allow for larger group sizes, bar games such as pool, and overall increased flexibility for businesses and residents under lessened COVID-19 restrictions.

The implications of Montana’s new constitutional-carry gun law will take some time to settle out on the state’s college campuses.

This week, the City of Missoula discussed potential updates to ward boundaries, and outlined the interview process for the Affordable Housing Trust Fund Citizen Oversight Committee.

Minutes before the start of a Tribal Council meeting, Confederated Salish and Kootenai Tribal Chairwoman Shelly Fyant took a moment to consider the confirmation of Deb Haaland as Interior Secretary.

Dr. Anthony Fauci, the nation's top COVID-19 adviser and director of the National Institute of Allergy and Infectious Diseases, said during a Mansfield Zoom conversation that he thinks vaccinations of the country's population may return the U.S. to "a degree of normality" by mid-fall.

Dr. Anthony Fauci responds to a question from Shelly Fyant, chairwoman of the Confederated Salish and Kootenai Tribes’ Tribal Council, shown at the bottom of a screen in the UM library on Wednesday.