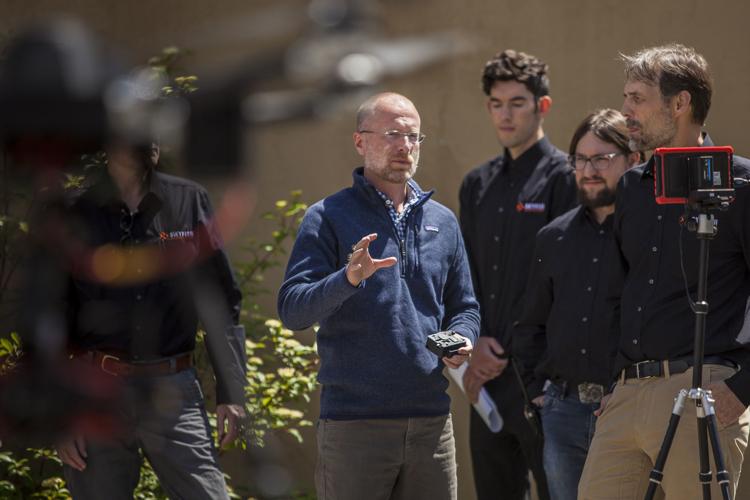 Federal Communications Commissioner Brendan Carr asks Skyfish CEO Orest Pilskalns a question about a Skyfish drone being flown for a demonstration on Tuesday afternoon. Carr watched the drone fly for a few minutes in the Montana Technology Enterprise Center parking lot before heading inside for a conference. 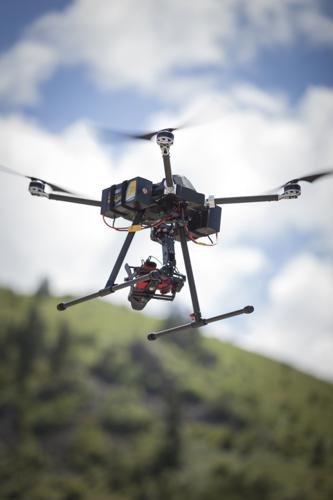 The Skyfish drone hovers above the MonTec parking lot during the demonstration. 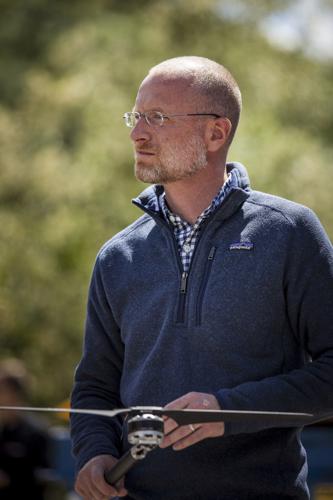 Self-flying drones built by a Missoula company can play a critical role in building out America’s high-speed cellular network technology, according to a Federal Communications Commission member visiting on Tuesday.

Brendan Carr, a commissioner on the FCC, was in Missoula to visit Skyfish, a drone manufacturer based in the Montana Technology Enterprise Center (MonTec) on East Broadway in Missoula. He was there to talk about how drones can service critical infrastructure like cell tower sites.

Skyfish makes drones that have a variety of uses, but one of their major customers uses them to inspect cell towers for maintenance issues rather than having engineers climb the towers.

“We’re very focused at the FCC on this idea of closing the digital divide,” Carr said, "making sure that every American, no matter where they live, has access to next-generation, high-speed Internet for tele-health, for educational opportunities and the jobs they create.”

The county is in the midst of a shift from 4G wireless technology to 5G, which is 100 times faster, he said. However, the country has only between 200,000 and 300,000 cell sites right now, according to Carr.

“For 5G you need to add about 100 times that number of cell sites,” he explained. “So we’ve been acting at the federal level to make it easier to create new cell sites. You can now place them on utility poles and we’ve done other reforms to speed the buildout of infrastructure. And so we look at the drone space as part and parcel of how do we get this new infrastructure built and maintained.”

He said drones can cut down on tower climbing and the time it takes to build and maintain these sites.

“One thing we’re doing is speeding the deployment of cell sites, which can create more work opportunities for companies,” he said. “In 2017 for instance, there was 13,000 new small cells put up. And through some reforms that we’ve done, that number jumped in 2018 to over 60,000. So there’s a lot more antenna sites and cell sites out there that are going to need some of the work here.”

Skyfish was founded in 2014 by current CEO Orest Pilskalns and has 12 employees. They currently have a few dozen drones in operation, but Pilskalns said the company intends to get to 30 employees within the next year or two and have hundreds of drones in operation. Their drones can take thousands of pictures of cell towers and bridges and provide three-dimensional models for engineers doing maintenance. In many cases, they can do the job with just the push of a button, Pilskalns noted.

“We really appreciate Commissioner Carr’s visit and his understanding of the importance of American drone manufacturing,” Pilskalns said. “American drone innovation creates an important localized knowledge base and a more skilled workforce that in-turn helps America maintain its global technology leadership for decades to come. Who better to protect, inspect and monitor America’s critical infrastructure, with drones, than American drone makers?”

The company is trying to get a contract with the U.S. Forest Service for drones that would drop incendiary ping-pong balls over public lands for controlled burns. Right now, the process requires helicopters, but Skyfish has developed a drone capable of handling the job.

Carr also said that the U.S. Department of Homeland Security is now concerned more than ever about avoiding Chinese drone companies because there have been several recent instances of those companies using information about American infrastructure systems. He's one of five commissioners that make decisions about America's communications technology from the FCC offices in Washington, D.C., and has been serving just over two years.

“I look forward to learning more about the U.S. innovations that are driving this emerging industry,” Carr said.

Trees and power lines knocked down by Ian

Trees and power lines knocked down by Ian

Federal Communications Commissioner Brendan Carr asks Skyfish CEO Orest Pilskalns a question about a Skyfish drone being flown for a demonstration on Tuesday afternoon. Carr watched the drone fly for a few minutes in the Montana Technology Enterprise Center parking lot before heading inside for a conference.

The Skyfish drone hovers above the MonTec parking lot during the demonstration.