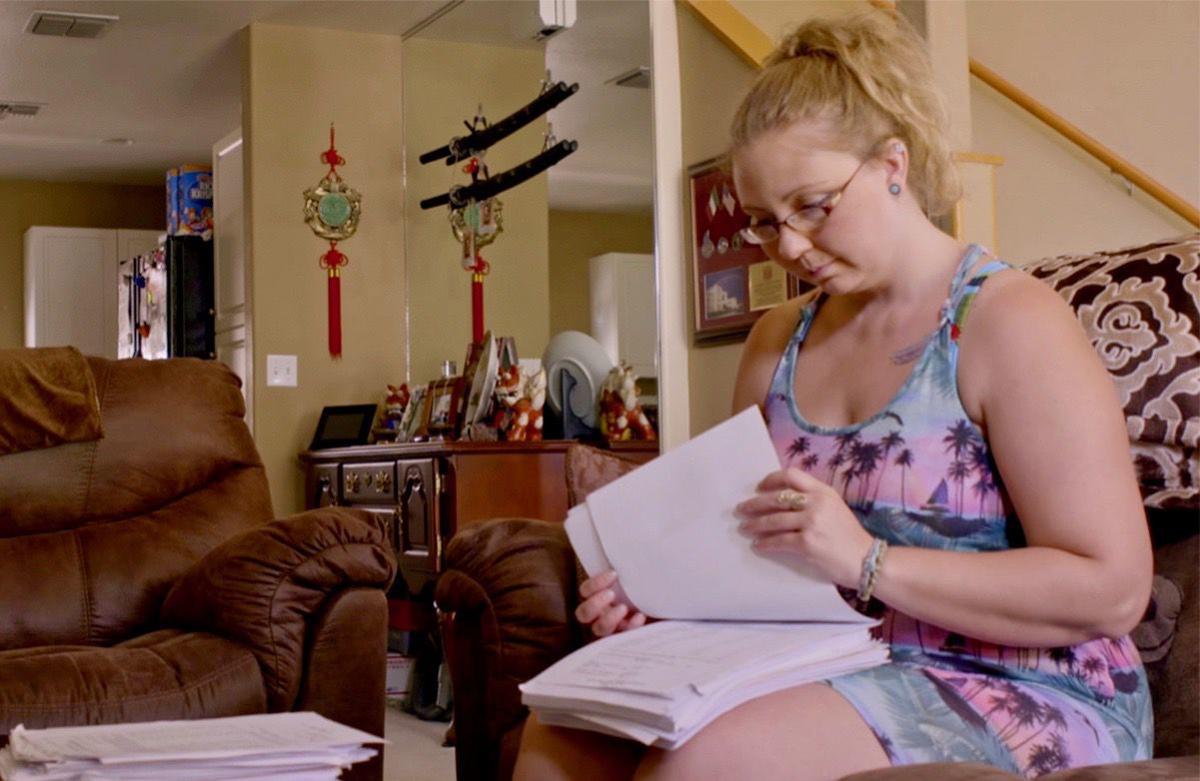 Tammy Loertscher sifts through files related to her lawsuit against Wisconsin's Unborn Child Protection Act during the filming of "Personhood," a new documentary screening at the Big Sky Documentary Film Festival. 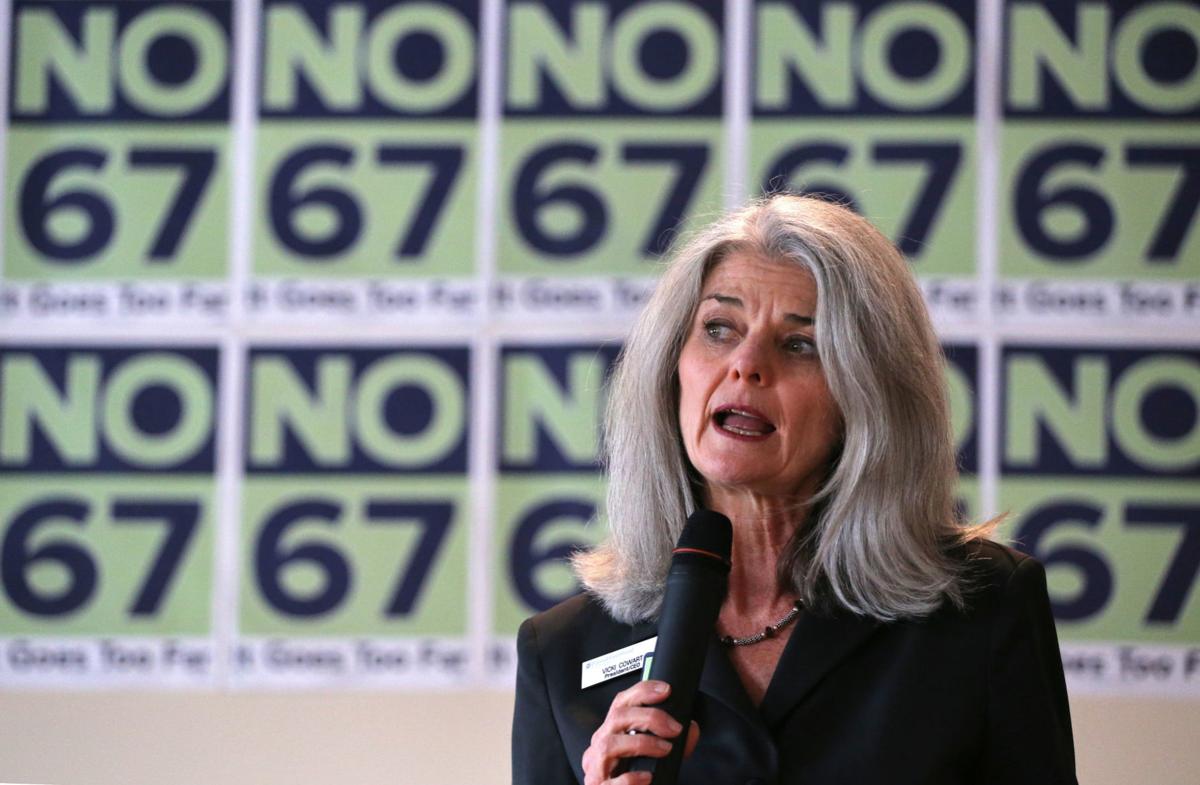 Vicki Cowart, president and CEO of Planned Parenthood of the Rocky Mountains, speaks during a news conference and rally against Amendment 67, the so-called personhood measure, at Planned Parenthood, in Denver, in October 2014. Cowart is featured in the new documentary "Personhood," which is screening at the Big Sky Documentary Film Festival on Sunday and Tuesday.

Tammy Loertscher was 14 weeks pregnant when she went to the emergency room in Taylor County, Wisconsin, to seek medical care. Loertscher suffers from a thyroid condition and takes a daily supplement to ease the symptoms.

Shortly before she became pregnant, she lost her job and the medical insurance that came along with it. Without her prescription medication, she began to self-medicate with methamphetamine to ease the debilitating depression symptoms of her condition.

After taking two positive pregnancy tests, Loertscher immediately ceased the meth she was using a few times a week and drove straight to the hospital in the hopes of getting help. Worried about the health of her child, she assumed they would make sure she and the baby were healthy and put her on a safe and legal drug for her thyroid. Instead, she ended up in jail, missing her first appointments with an obstetrician and living in conditions unsafe for a pregnant woman for nearly 20 days.

Loertscher’s story is the subject of “Personhood,” the debut feature documentary from director Jo Ardinger, which is screening at the Big Sky Documentary Film Festival on Sunday and Tuesday (see box for details).

The film dives far beyond the right to choose, and looks at the growing system of “personhood” laws across the country that aim to criminalize and police pregnant women, she said.

Ardinger first heard of personhood laws in 2011, when a fight was waged between pro-choice and pro-life advocates in Mississippi. The laws were being written, with often confusing and unclear language, to create no-exception bans against abortion, she said.

But what Ardinger learned was that these laws that prioritize the rights of fetuses were being used against women who had no intention of ending their pregnancies.

“I learned about how many advocates were on the ground working on this particular issue, but I didn’t feel that it was really being lifted up in terms of the mainstream media. So I thought that it was an important hole that needed to be filled in telling this full story of reproductive oppression.”

In 1997, Wisconsin passed the Unborn Child Protection Act, a personhood law that allows the state to take an expectant mother into custody and put her in long-term, inpatient drug treatment or even jail. It forces doctors to break the patient-doctor confidentiality agreement and call the authorities if they find even trace amounts of drugs or alcohol in a pregnant woman’s system, Ardinger said, adding Loertscher’s results were both trace and marked inconclusive.

In Loertscher’s case, shortly after blood tests and an ultrasound, she was brought into a room in the hospital with a judge and her fetus’ lawyer on a speaker phone. Loertscher did not have a lawyer present and was unsure of what was going on.

The choice they gave her: Go to an inpatient drug treatment program for the remainder of her pregnancy or go to jail.

Loertscher’s story illustrates how focusing solely on protecting the fetus is leading to dangerous situations for both mother and child, Ardinger said, adding that under some of the language in these personhood laws, women could go to jail for having a miscarriage.

“I try to make the point in the film that this is actually happening and has been happening for many, many years and that these aren’t fantasies or scare tactics of people who believe in women’s rights of bodily autonomy.”

In another case highlighted in the film, a pregnant woman in Alabama was jailed for having a miscarriage after being shot in the stomach.

“Their reasoning was that she should’ve known better than to put herself in a dangerous situation,” Ardinger said. “For so long anti-choice groups have solely focused on the world of the fetus and the rights of the fetus. It’s kind of blinded people to the absurdity of the situations they’ve created when these laws get put in place.”

The danger comes in creating a scenario where women can be held accountable for the outcomes of their pregnancies, she said, adding that at the end of the day, personhood laws are ultimately about punishing and controlling women.

“What if you went hiking and slipped on some loose dirt and fell and had a miscarriage?” she asked. “If you give the state the ability to do that, then you’re opening up the possibility for women being punished or sent to jail for anything that could be seen as endangering the life of a fertilized egg embryo or fetus.”

"I think what Loertscher’s story does so well is explain that this is not a black and white issue,” Ardinger said. “What would Tammy’s world have looked like if the help she sought actually came to her?”

At one point, Loertscher asks the prosecutors whether her legal issues would have gone away if she had just sought and received an abortion, Ardinger said. Their answer was yes.

“And that’s the problem, is that if you’re trying to encourage women to have healthy pregnancies and get the care they need, that you wouldn’t threaten them with something so onerous like jail time or punishments that could encourage them to end their pregnancies.”

In the film, Loertscher eventually sues the state, challenging the Unborn Child Protection Act as unconstitutional.

“She just never wanted this to happen to another woman,” Ardinger said. “It was so traumatic for her and she was treated in such a dehumanizing way.”

While a judge initially ruled on Loertscher’s side, a year later the decision was vacated on a technicality.

Ardinger said she hopes the film encourages people to pay attention and stay engaged in local politics, because these laws are made in state legislatures.

“We really want the film to tell people, what are the consequences of this so that they understand the full ramifications of the things that they think they might support.”

“Personhood” is nominated for best feature at the Big Sky Documentary Film Festival, which Ardinger said is really exciting after nearly eight years of work with a small, dedicated team.

“It feels so good that this film is being recognized because it makes me feel like people understand that this is a very critical issue and they see the value in making it.”

The festival is a special event for Ardinger, because it’s where she first pitched the idea for “Personhood” years ago.

“That was a real boost for this very small team of filmmakers and we’re so excited to come back with the finished film,” she said.

There are 150 movies playing at the Big Sky Documentary Film Festival, which kicks off on Saturday. Check out our preview coverage to help fin…

'Healing From Hate': Film follows 'formers' as they de-radicalize from neo-Nazi extremism

“Healing From Hate: Battle for the Soul of a Nation,” screens on Saturday, Feb. 15 and Monday, Feb. 17 as part of the Big Sky Documentary Film Festival.

'All That Remains' eyes plight of undocumented workers after Calif. fires

'The House That Rob Built': A love letter to longtime Lady Griz coach

Co-directed by Megan Harrington, who played for the Lady Griz under Selvig in the ‘90s, the film is set to premiere at the Big Sky Documentary Film Festival on Thursday, Feb. 20.

Some ticket holders at the Big Sky Documentary Film Festival were turned away from a Sunday afternoon screening held at the Roxy Theater when tickets were oversold at the festival's smallest venue.

Big Sky Doc Fest: What films are screening on Wednesday

The Big Sky Documentary Film Festival heads into Wednesday with a full line-up of options.

Tammy Loertscher sifts through files related to her lawsuit against Wisconsin's Unborn Child Protection Act during the filming of "Personhood," a new documentary screening at the Big Sky Documentary Film Festival.

Vicki Cowart, president and CEO of Planned Parenthood of the Rocky Mountains, speaks during a news conference and rally against Amendment 67, the so-called personhood measure, at Planned Parenthood, in Denver, in October 2014. Cowart is featured in the new documentary "Personhood," which is screening at the Big Sky Documentary Film Festival on Sunday and Tuesday.