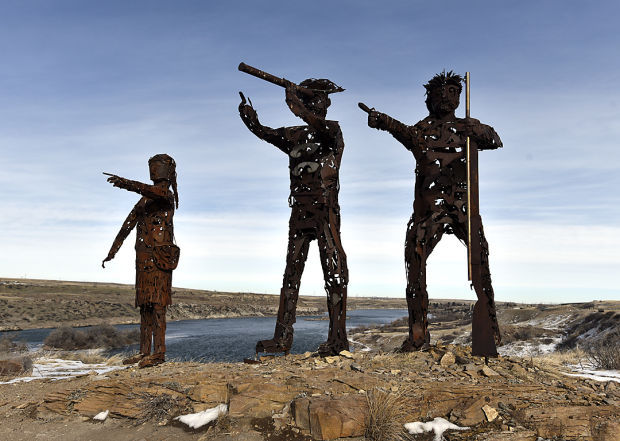 A sculpture of Lewis, Clark and Sacagawea stands next to the Missouri River on the trail system between Black Eagle Falls and Giant Springs State Park. 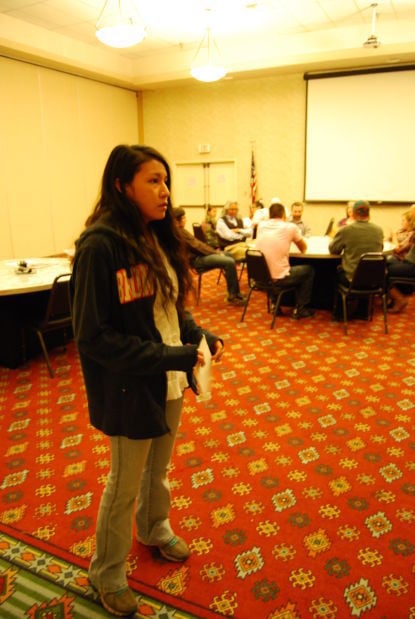 Antoinette Yazzie said she’s too nervous to sit down while she waits. Her family told her she should come out and audition, and she said her boss even took over her shift at work so she could make it to the casting session. 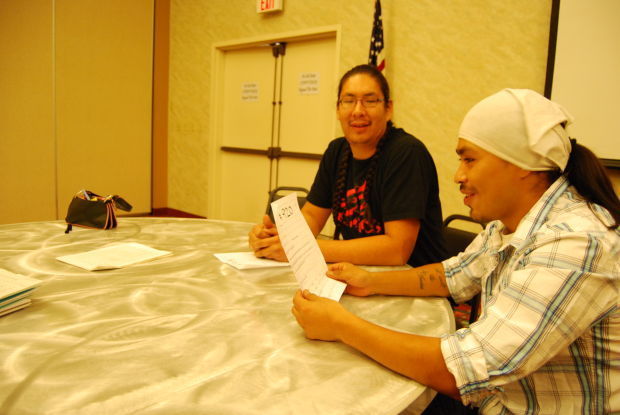 Gavin Eldridge sits at one of the tables in the waiting room with his friend Lonnie Old Shoes. Old Shoes was one of the people who told Eldridge he should come to the “Lewis and Clark” casting, and was an extra in the 2003 movie “Dreamkeeper.”

An HBO miniseries about the epic American journey of Meriwether Lewis and William Clark will apparently be filmed in Canada.

The company is still mum about such details two weeks after Michael Lombardo, president of HBO Programs, announced that production of the six-hour miniseries based on the Stephen Ambrose book “Undaunted Courage” has received the green light.

“Lewis and Clark,” set to air in 2016, will star Casey Affleck – Ben’s little brother – as Lewis and Belgian actor Matthias Schoenaerts as Clark.

A Calgary Herald report in January quoted a source close to the production who said the project will be primarily shot in southern Alberta, with pre-production beginning in mid-February and production set to start this summer.

“Thanks for checking in. We have no new information to share at this time,” an HBO spokeswoman said by email Friday.

“At this point we don’t know where exactly the primary principal photography will take place. What we do know is that they’ll be shooting a significant amount of second-unit and plate shots in the state of Montana, so Montana will be on the screen in the miniseries.”

It would be difficult to replicate elsewhere the spectacular White Cliffs of the Missouri, the Gates of the Mountains or the Rocky Mountain Front of Montana, Staggs pointed out.

“Even if they don't film here, the fact that many of the most exciting episodes of the expedition happened in Montana has tremendous implications for our tourism industry, as well as for the awareness and protection of the trail in general,” noted Stephenie Ambrose Tubbs of Helena, whose father wrote the book the miniseries is built around.

Staggs said his office is discussing with the state’s Office of Tourism ways to capitalize on “Lewis and Clark,” no matter where it’s shot.

Last fall, HBO staged 19 open casting calls in Idaho, Wyoming, Washington, Montana and Alberta seeking to fill the role of Sacagawea. The final three in November were in Missoula, Polson and Browning. Great Falls native Rene Haynes, described by Staggs as “the pre-eminent Native American casting director in the industry,” led the team.

The filmmakers were also seeking American Indians who could accurately represent the people along the route during the early 19th century.

Staggs has spoken with Haynes about the casting calls, but said nothing definite has been announced.

“She was saying there were a couple of Montanans who were definitely in the running for significant roles, so that’s good,” he said.

The miniseries has some big names attached to it. Tom Hanks, Brad Pitt and Edward Norton are among the executive producers, as is Emmy Award winner Gary Goetzman. Norton, who has spent time in Fort Benton scouting out shooting locations on the Missouri River, co-wrote the screenplay with director John Curran and Michelle Ashford.

Casey Affleck, aka Capt. Meriwether Lewis, was an Oscar nominee for best supporting actor in the 2007 film “The Assassination of Jesse James by the Coward Robert Ford.” He played Robert Ford; Pitt was Jesse James.

The casting of Schoenaerts as Capt. William Clark wasn’t known until HBO’s green-light announcement on Jan. 30. The 37-year-old from Antwerp played a cattle farmer addicted to steroids in “Bullhead” in 2011, an impulsive and promiscuous kickboxer in “Rust and Bone” in 2012 and an intimidating Brooklyn bum last year in “The Drop.”

The scheduled airing date of 2016 for "Lewis and Clark" is 10 years after the four-year bicentennial celebration ended.

HBO’s plans to turn “Undaunted Courage” into a television series started surfacing as early as 2005. Hollywood-oriented magazines reported back then that HBO was teaming with National Geographic, Norton and Pitt for a 10-part miniseries.

“Lewis and Clark’s expedition is as great a story as you could ever hope to tell, and like so many people, Brad and I have both been drawn to it for years,” Norton told Variety Magazine at the time. “We both always agreed that compressing that story into a feature-length film ruined the spirit of it … so we sat down and said, ‘How can we really do this justice?’ ”

HBO, said Norton, was the only company committed to “this kind of long-form storytelling, and so we’re ecstatic that they wanted to take it on with us.”

“This series has been a long time in the making and I greatly appreciate HBO's commitment to producing a quality miniseries,” Ambrose Tubbs said Friday. “I have no reason to believe this will not be as big if not bigger than the John Adams miniseries.”

That seven-part series, televised by HBO in 2008 and co-produced by Hanks and Goetzman, garnered 13 Emmy Awards, more than any miniseries in history. It also proved a boon for business in Virginia, where it was filmed. An estimated $80 million was spent in the Commonwealth that was directly attributed to “John Adams” even before it hit the screen.

Stephen Ambrose, who died in 2002, published “Undaunted Courage” six years earlier. He and his family had ties to Montana long before that, and daughter Stephenie continues to champion the Lewis and Clark story.

Hanks produced the successful HBO miniseries “Band of Brothers” based on another Stephen Ambrose book.

“My father would be thrilled Tom Hanks is at the helm,” Ambrose Tubbs said.

Margaret Gorski, who coordinated the Missoula Lewis and Clark bicentennial celebration for the U.S. Forest Service, is in her second year as president of the National Lewis and Clark Trail Heritage Foundation headquartered in Great Falls.

Gorski said the movie folks haven’t drawn the foundation into their plans, but she was impressed with attempts to cast people who could portray “culturally accurate” characters.

Foundation members are excited “that such a well-known actor and production company has chosen to portray this story,” Gorski said.

“Even though the bicentennial has come and gone, the designated Lewis and Clark National Historic Trail still exists for people to enjoy and learn from. Of course they can film anywhere they want to, but we would have liked to see them film it along the ‘Real McCoy.’ ”

Plenty of places remain along the original routes that still look much as they did when Lewis and Clark traveled through Montana in 1805 and 1806, Gorski pointed out.

“We wish the production company well and hope they hold true to the accuracy of the story, including their relationships with the tribes, and how they describe and portray the great wealth of natural resources they discovered and that sustained them along the way.

"Fortunately for us, (those resources) still to a great extent exist today.”

Filmmakers seek to bring Sacajawea to big screen, use Missoula area for pre-production

LOLO – You may say she’s a dreamer, but Jane Fitzpatrick firmly believes she was born for this.

Cast filled out for HBO 'Lewis and Clark' miniseries

It looks like the role of Sacajawea in the HBO miniseries “Lewis and Clark” will be played by a Canadian actress.

FLORENCE – Gordon Wallace knows Rush’s Thunderbolts. He can show you how a blunderbuss works and make you jump when it does.

Action: Montana film industry off to good start in 2015

With one motion picture in the can and scouting completed on two more, Montana’s film industry is off to a good start this year, according to …

HBO shuts down shooting of 'Lewis and Clark' miniseries

Production on HBO’s long-awaited “Lewis and Clark” miniseries has been suspended due to weather and creative reasons.

Will or will not Lewis and Clark make it out of Canada and onto your premium cable channel?

Antoinette Yazzie paced the floor of the conference room at the KwaTaqNuk Resort in Polson, eyes flicking down to the piece of paper in her ha…

HBO's 'Lewis and Clark' to seek Sacajawea actress in Missoula

A casting team will visit Missoula, Polson and Browning early next month seeking to fill the lead role of Sacajawea in the upcoming six-hour H…

A sculpture of Lewis, Clark and Sacagawea stands next to the Missouri River on the trail system between Black Eagle Falls and Giant Springs State Park.

Antoinette Yazzie said she’s too nervous to sit down while she waits. Her family told her she should come out and audition, and she said her boss even took over her shift at work so she could make it to the casting session.

Gavin Eldridge sits at one of the tables in the waiting room with his friend Lonnie Old Shoes. Old Shoes was one of the people who told Eldridge he should come to the “Lewis and Clark” casting, and was an extra in the 2003 movie “Dreamkeeper.”