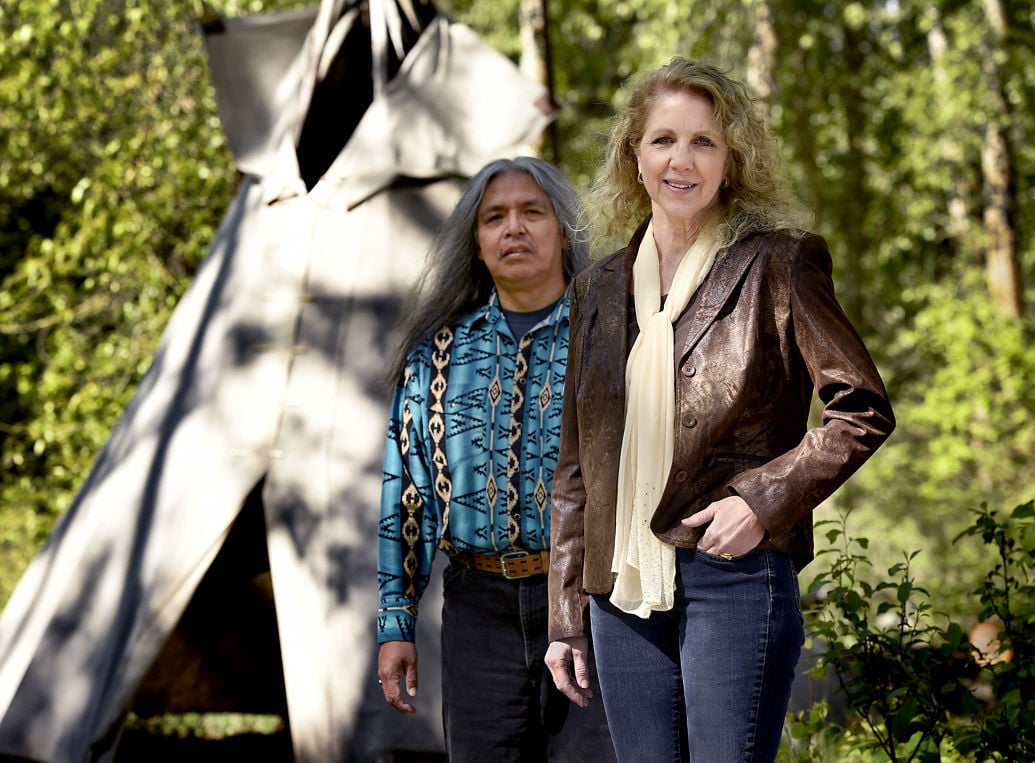 Producers Jane L. Fitzpatrick, right, and Chief Whispering Raven Nelson are hoping to raise enough money to make a $30 million feature film on the life of Sacajawea. Fitzpatrick, from Rochester, Washington, spent four years writing the screenplay for what she calls a "Montana story." 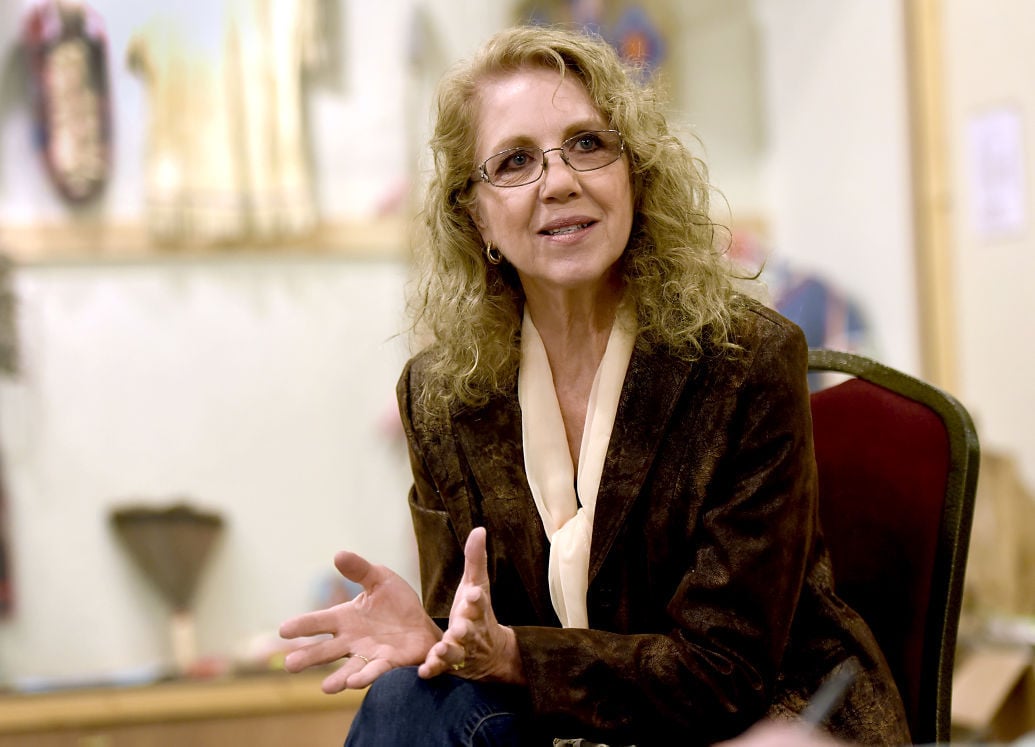 "This project has really been with me all my life," says Fitzpatrick who tells of a series of coincidences that led her to Three Forks and a spirit sign that told her to write Sacajawea's story.

LOLO – You may say she’s a dreamer, but Jane Fitzpatrick firmly believes she was born for this.

Fitzpatrick and a considerable cast of supporters are raising funds to produce a $30 million feature film on the life of Sacajawea, the heretofore cardboard character who carted her newborn son to the Pacific Ocean and back with Lewis and Clark in 1805 and 1806.

“This project has really been with me all my life,” the Washington woman said Wednesday at Travelers’ Rest State Park, where the men and women and dog of the Corps of Discovery stayed longest in Montana.

Fitzpatrick spent four years writing the screenplay for “Windcatcher: The Story of Sacajawea.” She has formed her own production company, Windcatcher Entertainment, and lined up a Shoshone descendant of Sacajawea as an associate producer. Among other credits, director Kaaren Ochoa assisted Robert Redford in “A River Runs Through It.”

Fitzpatrick has compiled a business plan and hired as a collaborator Whispering Raven Nelson of Kettle Falls, Washington, the last traditional chief of the Thlingit people in Alaska. He’s heading up an internship program geared for Native American youth and university students in Montana and other states they say will offer opportunities to work with and rub shoulders of A-list moviemakers at shooting sites yet to be determined.

Due in large part to the University of Montana’s presence, Fitzpatrick and Nelson say they want to stage the 10 to 12 weeks of pre-production in the Missoula area.

The timing depends on funding.

“We’re looking for $250,000 in development funds at this point so we can keep going and doing this,” said Fitzpatrick, who has been putting the pieces together since she finished the screenplay in 2007.

“It’s not an easy task. I didn’t really know how to go about it. I realized pretty soon after I started that I could have sold this to Hollywood many times. But I promised the Shoshone people I would do it the right way.”

Fitzpatrick, who lives in the western Washington town of Rochester, was born on the Columbia River at Richland, Washington.

Her parents named her Jane, not realizing at the time “Janie” was what Lewis and Clark nicknamed Sacajawea. It turned out to be the start of what Fitzpatrick calls “interlacing textures” of her life that led her to Sacajawea's story.

She first became aware of her “calling” some 25 years ago while sitting alone on Fort Rock at Missouri Headwaters State Park near Three Forks. It’s not far from where a 12-year-old Sacajawea was kidnapped by Hidatsa warriors in about 1801. Fitzpatrick lived in Bozeman with husband Matthew and their three children at the time.

An attempted children’s book fell short after three chapters, when she realized Sacajawea deserved and commanded more depth – even though there is all too little evidence in the journals of the expedition.

She put the project aside for more than a decade, when a quote she saw on a paperweight at a bookstore jarred her into action. It was by Michelangelo, who said: “I saw the angel in the marble and carved until I set him free.”

“I just lost it right there. I was like, 'I have to write this story and I’m going to find it,' ” Fitzpatrick said.

She found Sacajawea on the coast of Oregon. In one of a dozen instances in the journals that shed light on the then 17-year-old mother’s persona, Capt. Meriwether Lewis described a scene on Jan. 6, 1806, in which Capt. William Clark set out for the coast to fetch parts of a beached whale for the hungry Fort Clatsop.

“Charbono and his Indian woman were also of the party,” Lewis wrote. “The Indian woman was very impotunate to be permited to go, and was therefore indulged; she observed that she had traveled a long way with us to see the great waters, and that now that monstrous fish was also to be seen, she thought it very hard she could not be permitted to see either (she had never yet been to the Ocean).”

Lewis meant to spell “importunate,” which means insistent to the point of annoyance.

“From that little excerpt,” Fitzpatrick said, “I found this woman, this courageous woman. You think about it, at the time she’s a woman and she’s a native, yet she’s standing up for herself. She’s saying 'I’m worthy.' ”

Clark’s willingness to take Sacajawea along that day struck Fitzpatrick. He comes across in the screenplay as a father figure for the Indian girl. Lewis is aloof and Charbonneau, her French Canadian husband, is a brutish clown.

There are plenty of unsettled controversies around Sacajawea, from the spelling and pronunciation of her name to her heritage. Was she Shoshone kidnapped by Hidatsas or the other way around? Did she die a few years after the expedition returned or live to old age on the Wind River Reservation in Wyoming?

“We’re not here to prove one side right or wrong,” Fitzpatrick said.

Still, Leo Ariwite of Fort Hall, Idaho, the Shoshone adviser on the movie and the Sacajawea descendant, did clear up one common misconception for her. He said when Sacajawea met Cameahwait among the Shoshone it wasn’t a meeting of brother and sister as historians portray but of uncle and niece. Aunts and uncles, Fitzpatrick said, played special roles in Shoshone family life.

For Sacajawea, the unnamed casting director will be looking for an unknown actress.

An HBO miniseries on the Lewis and Clark expedition that boasts the star-power of Edward Norton, Brad Pitt and Tom Hanks as executive producers is set to start filming next month is Alberta, Canada. Casting calls were made in Montana and elsewhere last fall for a Sacajawea, though the selectee has not been announced.

Fitzpatrick said the miniseries won’t overshadow her project, which focuses on one enigmatic but empowering character.

“It’s the difference between a silhouette and a full-blown figure,” Raven Nelson said.

"I don't see this as just a dream, because it is a lifelong path. Her story needs to be told and I know it's going to happen," Fitpatrick said.

There are more statues of Sacajawea in the U.S. than any other woman. She's been the subject of lots of books and documentary films, but there's been no full-blown feature film on the Sacajawea story.

Fitzgerald thinks the time is ripe.

“It’s a story about a strong woman that needs to be told in our world now,” she said. “She will be an icon, a mentor, someone that not only Native American girls but all girls can look up to and know that she was part of something great. And we’re still talking about her over 200 years later.”

Learn more about "Windcatcher: The Story of Sacajawea" at windcatcherthemovie.com or at info@windcatcherentertainment.com. Contact writer/producer Jane Fitzpatrick at janelfitzpatrick@gmail.com and Whispering Raven at ravinone01@gmail.com.

UM plans for rainy graduation ceremony; no umbrellas for grads

Rain or shine, the University of Montana will hold its main graduation ceremony in Washington-Grizzly Stadium.

Cast filled out for HBO 'Lewis and Clark' miniseries

It looks like the role of Sacajawea in the HBO miniseries “Lewis and Clark” will be played by a Canadian actress.

Disease and empire: Lewis and Clark were the lucky ones, historian says at UM

Behold the lowly, exasperating, good-for-nothing mosquito. Western America should be thanking it.

HBO shuts down shooting of 'Lewis and Clark' miniseries

Production on HBO’s long-awaited “Lewis and Clark” miniseries has been suspended due to weather and creative reasons.

The tree that looks like an elk: History of Douglas fir pervades Missoula

Missoulians often mistake Douglas fir trees for elk – a fact that would amuse David Douglas to no end.

Will or will not Lewis and Clark make it out of Canada and onto your premium cable channel?

Filmed here or not, HBO's Lewis and Clark miniseries will show a lot of Montana

An HBO miniseries about the epic American journey of Meriwether Lewis and William Clark will apparently be filmed in Canada.

The Winter Storytelling Series at Travelers’ Rest State Park in Lolo continues at 11 a.m. Saturdays with the following programs:

HBO's 'Lewis and Clark' to seek Sacajawea actress in Missoula

A casting team will visit Missoula, Polson and Browning early next month seeking to fill the lead role of Sacajawea in the upcoming six-hour H…

In a man's world, women made their mark in Glacier Park

WEST GLACIER – Part of the history of Glacier National Park is written on maps, where place names aren’t the exclusive territory of men, but t…

Producers Jane L. Fitzpatrick, right, and Chief Whispering Raven Nelson are hoping to raise enough money to make a $30 million feature film on the life of Sacajawea. Fitzpatrick, from Rochester, Washington, spent four years writing the screenplay for what she calls a "Montana story."

"This project has really been with me all my life," says Fitzpatrick who tells of a series of coincidences that led her to Three Forks and a spirit sign that told her to write Sacajawea's story.