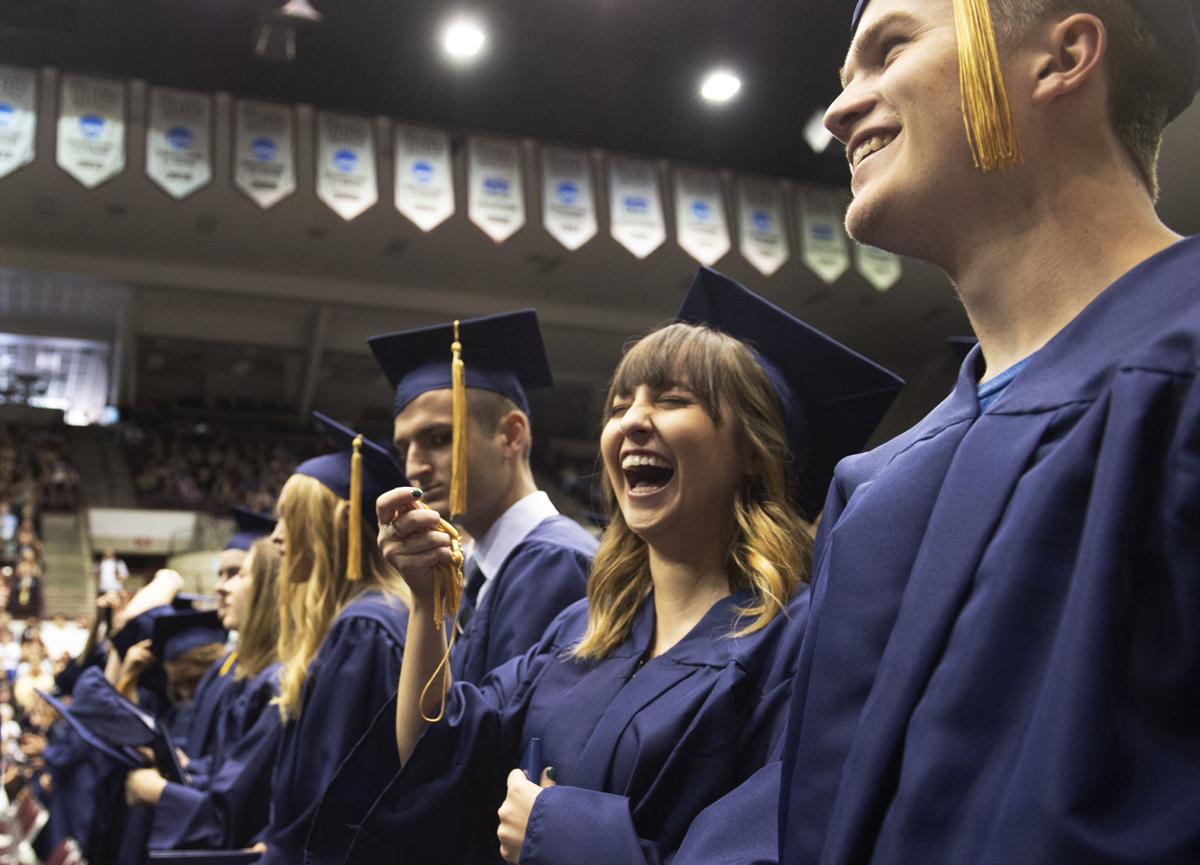 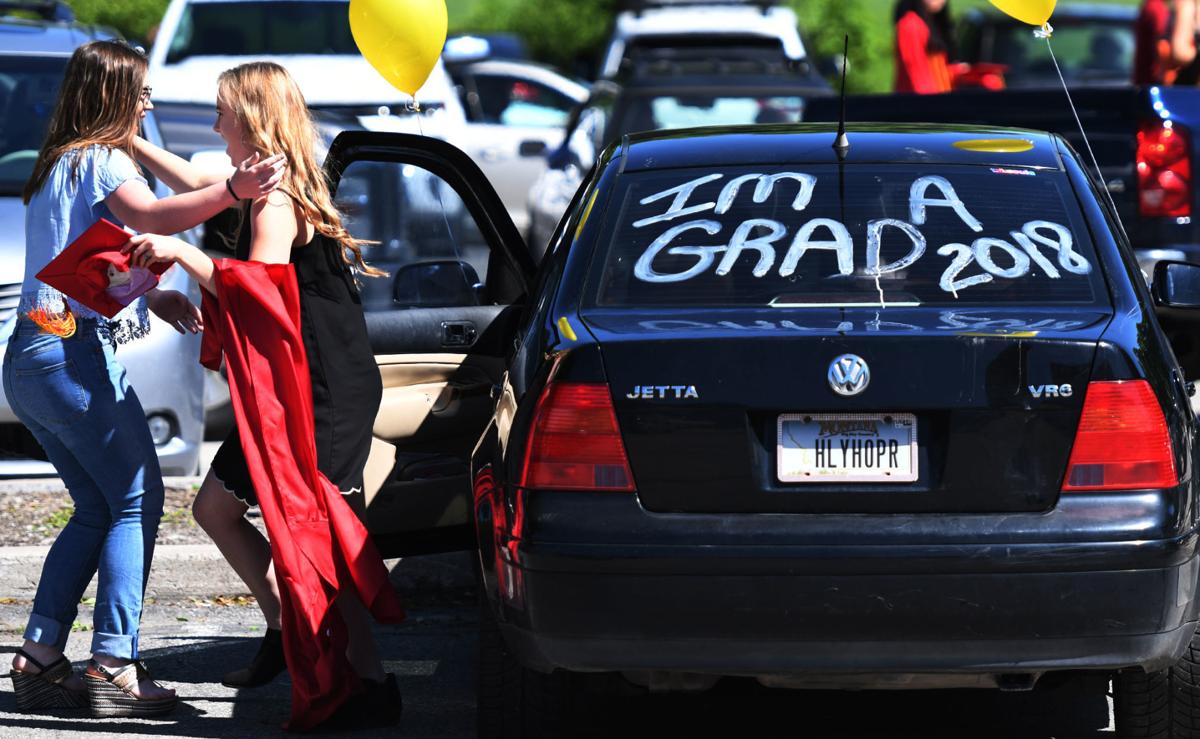 Holly Martell, right, jumps out of her car to hug Khianna Saunders prior to the start of the Hellgate High School graduation. 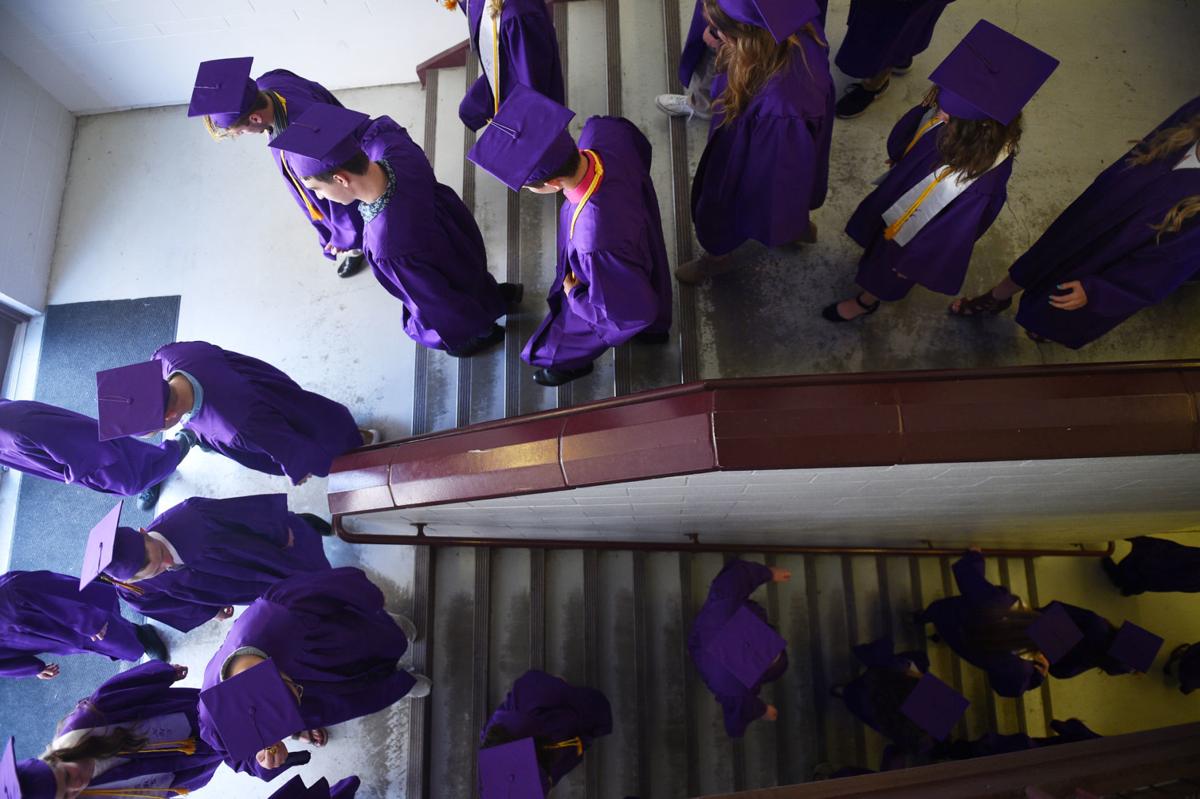 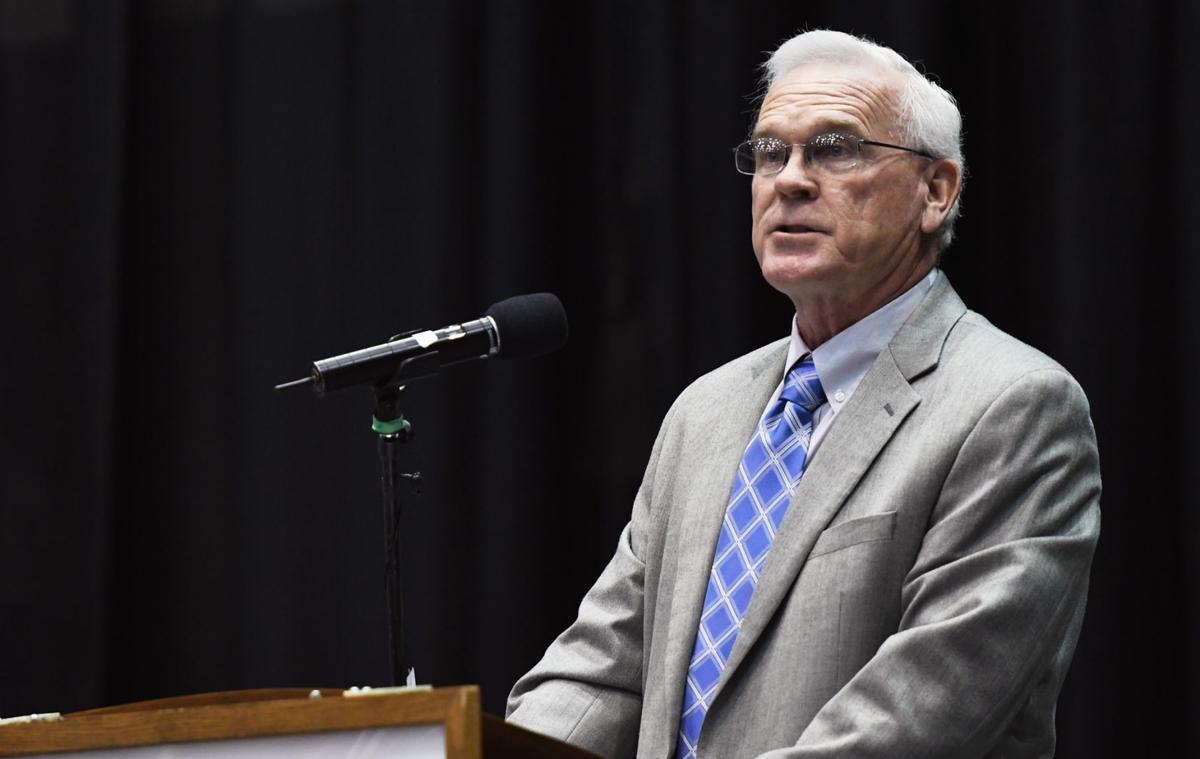 Holly Martell, right, jumps out of her car to hug Khianna Saunders prior to the start of the Hellgate High School graduation.

Hundreds of students from Hellgate, Sentinel and Big Sky high schools celebrated the end of their high school careers Saturday, cheered on by their supporters as they walked across the stage at the Adams Event Center.

In their blue caps and gowns, Big Sky students began the day’s celebrations. Student body co-presidents Gabriel Jourdonnais and Mackenzie Morrison delivered a speech together, reminiscing on the beginning of their time as high schoolers: their first football game, first math final, the frightening first encounter with a senior.

Then they discussed the things their class recently did for the last time, like walking through their school’s hallways as a Big Sky student.

“We’ve learned how to care for one another, and as a result have become a family,” Morrison said.

She asked her peers to look to their left and right and recognize the people who have shaped them over the years as a Big Sky eagle, the school’s mascot.

“The people sitting next to you might not physically be there for your next first, or your next last,” she said. “But these last four years have ensured that we will always be with each other in some way, because once you’re an eagle, you’re always an eagle.”

Principal Natalie Jaeger, who is leaving Big Sky to become principal at Meadow Hill Middle School next year, told the graduating class it is officially her favorite, as it marked her first and last graduating class.

“So many of you have overcome sadness and difficulty since I’ve known you in high school, and I just want you to know that I’m so proud of how resilient I’ve seen you during these past four years,” she said. “You inspire me every day with your bright minds and your big hearts.”

Jaeger introduced keynote speaker Robin Selvig, “a Montana institution,” who coached the Lady Griz basketball team at the University of Montana for 38 years. Selvig talked of his fear and anxiety at leaving the small town where he grew up to attend UM. He didn’t know what he wanted to study yet, he said, and missed home.

“Probably like many of you, I wasn’t sure what I wanted to do,” he said. “For those of you who aren't sure what you want to pursue, that’s OK. You really don't need to know the final destination. The journey’s what counts.”

He talked about his career as a coach, the players and teammates who inspired him, and the importance of not being too easily swayed by other people’s advice, something he received from many different people as a coach.

“It’s great to listen to advice, but you need to believe in yourself,” he said. “Always be open to learning and changing. You will all make mistakes. Never be discouraged by them, but learn from them.”

In the second ceremony of the day, Hellgate High students, donning their red caps and gowns, applauded the staff, teachers, parents and friends who helped them finish their high school careers.

Senior class president Ebony Hassan spoke to her peers about the ending and beginning that graduation represents. It’s the end of hearing students yell “Go Knights!” in the hallways, she said. “No more spirit week, no more prom.”

“Endings are inevitable,” she said, adding that all the graduates before her are destined for greatness, and her wish for them is that they follow their dreams and do what makes them happy.

“We have all grown into powerful, intellectual individuals who will make a massive footprint on this Earth.”

Dr. Chelsea Elander and UM President Seth Bodnar shared the stage as keynote speakers. Elander is a Hellgate alum, a fifth generation Montanan, and a pediatrician. Bodnar drew on his experience at West Point and in the army to encourage students to find the way they want to serve the world.

On this exact day 17 years ago, Bodnar said, he graduated from West Point and was commissioned as an officer in the U.S. Army. Three months later, the 9/11 terrorist attacks happened. The event and consequent U.S. military response drastically changed his life by sending him to Iraq, where he found himself drinking tea with tribal elders, doing very different work than he was trained for, he said.

“While your lives and your careers will be unique, I’ll bet that they’ll have unexpected twists and turns, and a lot more change than you expect right now,” he said.

Bodnar said two things helped him through the unexpected transitions in life: his education, which taught him to stay curious, and approaching each challenge as an opportunity, even if it didn’t seem valuable at the time.

Elander gave the example of the time Bodnar was assigned the position of “coffee officer” as the youngest faculty member at West Point. The job consists of making sure the faculty lounge has coffee and creamer, but Bodnar made it his mission to equip the lounge with only the best and most varied collection of coffee — “freshly ground, fair trade, hopefully recently roasted, coffee,” she said.

She encouraged students to be deliberate in their work, to engage rather than criticize, and to have goals and stick to them.

Bodnar and Elander finished their speech Ellen DeGeneres-style, by taking a selfie with the graduating class in the background.

The day’s ceremonies concluded with Sentinel High School Spartans, dressed in purple caps and gowns. Family members fanned themselves in the stands with the paper programs as the temperature rose outside.

Principal Ted Fuller said the graduating seniors are “near and dear” to his heart, as they became Spartans together four years ago. Since then, he has asked that they work together to overcome adversity and create an inclusive culture.

“It has been an honor to watch you do that,” he said.

Senior speaker Christina Hartman was chosen to deliver her speech by faculty who reviewed anonymous speech submissions. She compared the high school years to a “strenuous, incredibly confusing” hike.

It begins on an August morning, with a bear sighting, or maybe Bigfoot.

“As soon as you prepare to turn and run and never, ever come back, you notice it’s just a taller, hairier human,” she said. “That was your first encounter with a senior, but you’ll soon learn to ignore them.”

The hike continues with difficult climbs, sometimes necessitating crawling and dragging other friends up the hill (junior year, the ACT). It brings the students to a split in the path, where they decide where to go next.

“This is where we are today, on June second, almost four years after we started our hike. While the views are great from here, we must know that this is not the top of the mountain. There’s still going to be more falling, more exhaustion, but also more sunshine and prettier sites.”

“I hope you find the best views.”

At Sentinel, the students vote for a staff or faculty member to be their keynote speaker, and this year students chose science teacher Sam Dixon. Dixon’s speech focused on ways students can constantly strive to be better, without comparing themselves to others or needing to be the best.

In his classroom, he said they have a word for that: kaizen.

“It means good change. The word itself isn’t that important, but the idea that the word represents is really powerful. Small, incremental improvements made every day can lead to massive changes over time.”

Dixon said some of his students have embraced that mindset in class, telling him to “just kaizen it,” when he makes a mistake on the board. He said failures should be looked at as “guideposts for improvement,” not as things to be ashamed of.

Teaching is Dixon’s way of helping others, and he wished his students fulfilling careers that also help others in some way.

“One of the biggest aspects that makes my life better is trying to make your lives better,” he said. “It’s so rewarding.”

He gave his students several final life homework assignments, including, “be gentle with yourself, be a good human, focus on the better, kaizen.”