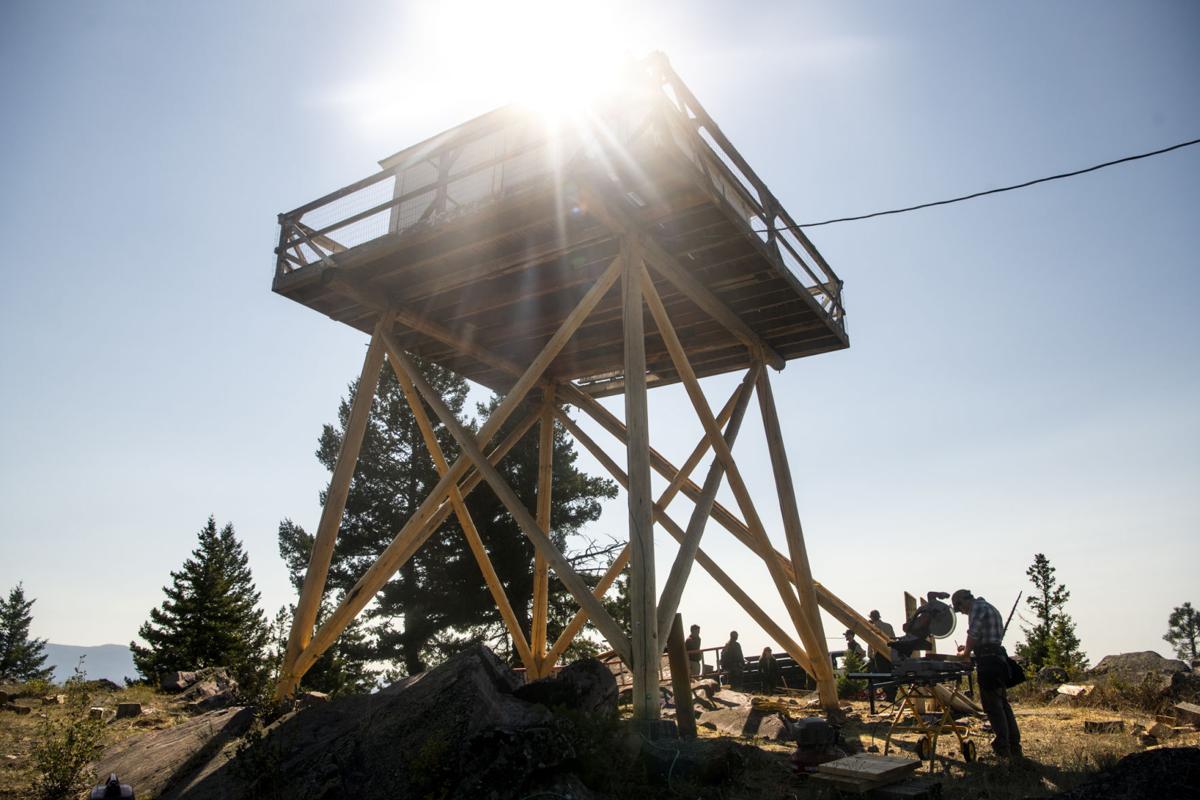 The Double Arrow fire lookout outside Seeley Lake is undergoing a renovation project to replace infrastructure underneath the cabin. Double Arrow is 1 of 12 fire lookouts in the Lolo National Forest that are being renovated in 2021. 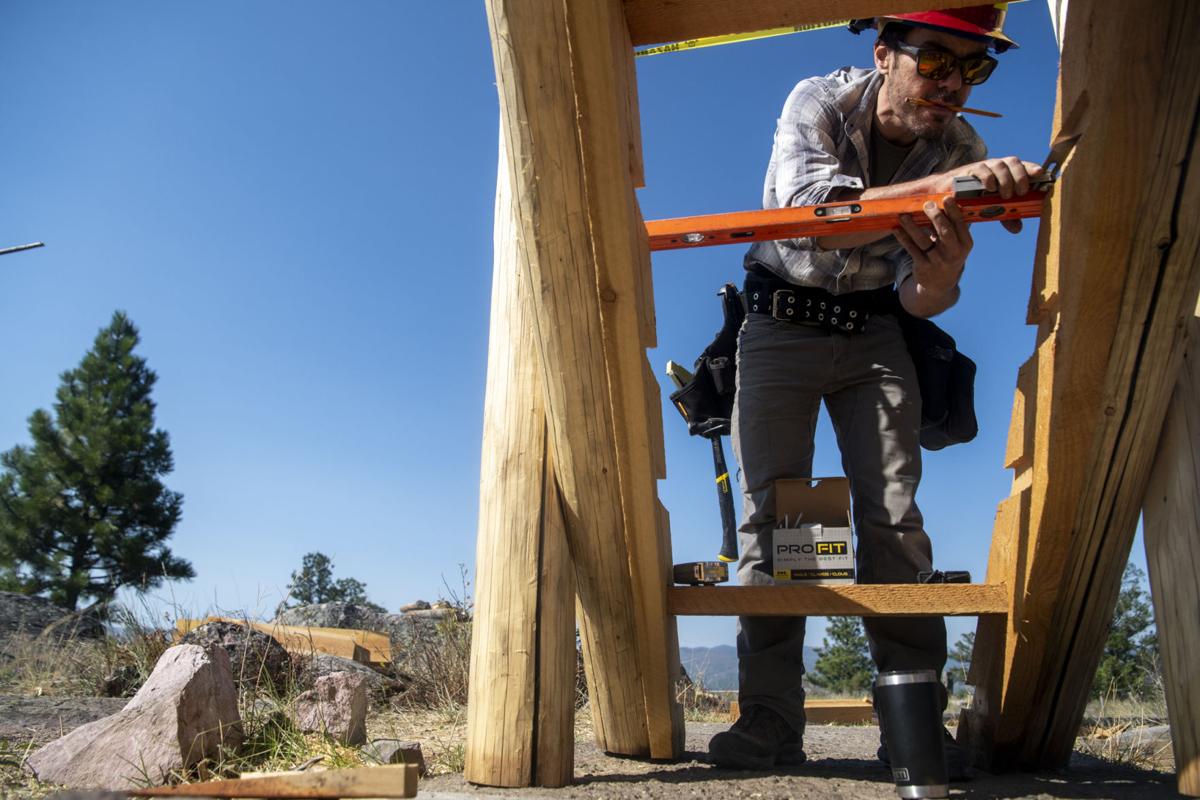 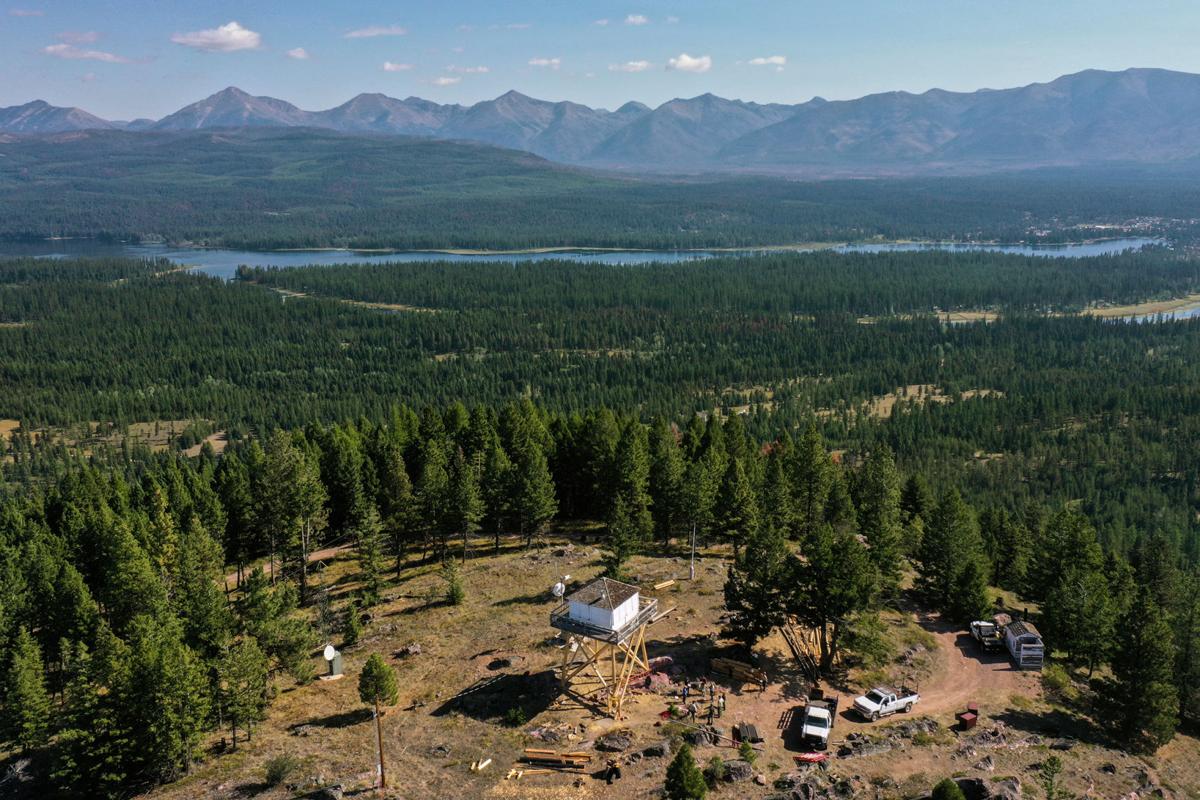 The Double Arrow fire lookout was added to the Register of Historic Places in 2019. The lookouts require maintenance every 6 to 10 years.

SEELEY LAKE — An eighth of an inch.

That’s all the space needed to slip a massive cap log into place between the old Double Arrow Lookout platform and its brand-new support legs. The maneuver took about 20 minutes.

“It’s shockingly easy,” Forest Service lead exhibits specialist Cathy Bickenheuser said. “Most of the process was just thinking it all the way through. We had the new log ready to go. We hoisted it up, did some shaping and put it in place.”

However, the “thinking it all the way through” part took several weeks of scaffold raising, precision angle-calculation, traditional craft woodwork and a career’s worth of restoration skill to make the Double Arrow Lookout ready for another several decades of public use.

The little cabin on 20-foot stilts sits about 1,000 vertical feet above the town of Seeley Lake, giving it views of peaks from the Mission Mountains to the Bob Marshall Wilderness. Built in 1933, it sheltered fire lookouts until the mid-1980s.

That age qualified it for listing on the National Historic Lookout Register. And that helped Bickenheuser and Seeley Lake Ranger District recreation officer Matthew Walter gather the money and resources needed to update its aging infrastructure.

Bickenheuser and colleague Jackson Poppen base out of the Forest Service Region 1 historic preservation office in Missoula. While that sounds local, their collection of esoteric skills and knowledge put them in demand throughout the United States wherever the Forest Service has historic or antique facilities in need of repair.

The duo have also spent lots of hours on the Skookum Lookout west of Lolo, replacing its rotting timbers with new wood.

Challenges at the Double Arrow included finding a metal fabricator who could cast structural bolts with the traditional square heads that held the original lookout legs together. Same-sized lodgepole logs had to be ordered from a log-cabin builder in the Bitterroot Valley.

“These were built really well,” Bickenheuser said. “It was just a matter of putting it all back together the same way.”

Walter said using modern techniques would have actually made the rehabilitation harder than sticking with old ways. For example, inserting those new cap logs between the stilts and the cabin platform would probably be done with a mobile crane — which probably couldn’t have made it up the twisty mountain road to the lookout perch.

Instead, a pickup truckload of scaffolding and some sweaty laborers were all that was needed to support and winch up the structure by hand.

“Once we were set up, we just lifted it a smidge, the cap log lifts out and we lowered it back down,” Poppen said. “We came up with a plan and the plan worked. This is one of two lookout designs dreamt up here in Missoula. It’s historically unique in that way.”

When available to rent, the Double Arrow Lookout usually spends all its 140-day season booked solid. It was closed this year and part of 2022 to complete the repairs. Next spring, crews will take on renovation of the cabin itself.

“These were built with skills we don’t have anymore,” Seeley Lake District Ranger Quinn Carver said. “It’s the passion of people like Kathy and Jack and all the retirees and volunteer experts who help us that keep these skills around. As we age out as an agency, that’s going to be critical to preserve for the new people coming in.”

“It really beats me to figure out how they got those logs up there,” said Lolo National Forest archaeologist Sydney Bacon. “We had to bring in helicopter help.”

Fireweed as tall as a horse’s saddlehorn has colored over the fire scar at Clearwater Crossing, and a new bridge will help horses and hikers enter this edge of the Great Burn proposed wilderness area.

Named with a Chinook Indian jargon word for "strong" or "powerful," the panoramic landmark southwest of Lolo has enjoyed three summers of restoration.

A cabin of classic construction and tragic fate, as well as a relic of early-day air travel may become the latest bits of western Montana included in the National Register of Historic Places.

The Double Arrow fire lookout outside Seeley Lake is undergoing a renovation project to replace infrastructure underneath the cabin. Double Arrow is 1 of 12 fire lookouts in the Lolo National Forest that are being renovated in 2021.

The Double Arrow fire lookout was added to the Register of Historic Places in 2019. The lookouts require maintenance every 6 to 10 years.