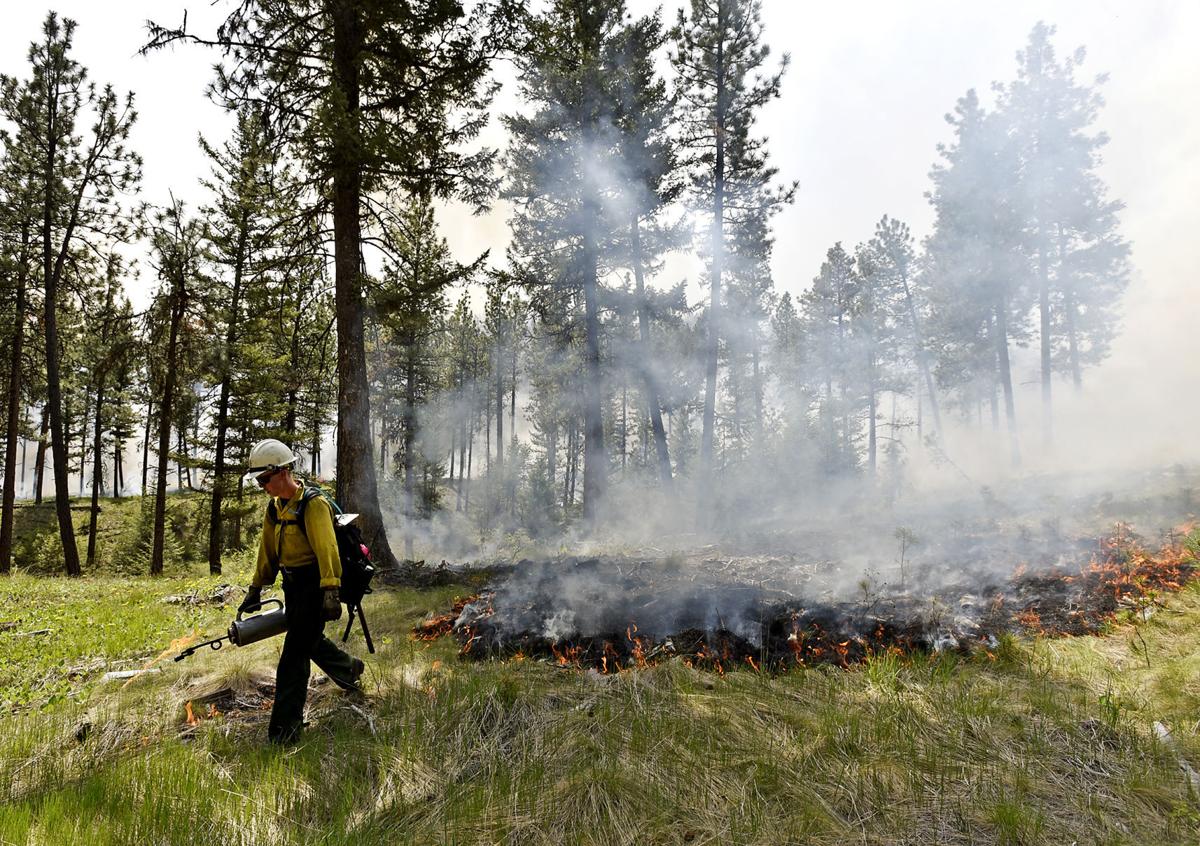 A member of the Lolo Hot Shots uses a drip torch to ignite part of a prescribed burn on Blue Mountain in 2015.

The 112-acre Primm homestead and its huge Ponderosa pines along the west fork of Gold Creek are evidence of the value of repeated, low-intensity forest burning to make old-growth stands more resilient to wildfire.

Western Montana’s fire season really got started back in May, if new research about wildfire management turns out right.

The Nature Conservancy western Montana forester sought to strengthen the grove by repeating a pattern tracing back to Salish Indians who did similar burns for centuries before.

"Primm Meadow hasn’t missed a fire cycle like a lot of places in the West have,” Schaedel said. “When we burned in spring, that was very evident. We had a very low-severity, controlled burn, and within three days, almost all the smoldering had stopped.

"By contrast, on some burns on the same day nearby in the forest that hadn’t seen fire in over 100 years, duff layers were smoldering 10 days afterward. That really spoke to the value of returning high-frequency, low-severity fire to a Ponderosa pine forest.”

This summer, it seems the only thing growing faster than western wildfires is the amount of research trying to understand them.

And the conclusion many scientific papers indicate is: We don’t have enough fire.

“Despite calls to restore fire as a cultural and ecological process, the dominant approach to wildfire management continues to be aggressive suppression,” University of Washington School of Environmental and Forest Sciences fire scientist Susan Prichard wrote in a paper that boiled down more than 1,000 fire strategy studies to 10 complicated questions.

The review examined everything from the effectiveness of fuel treatments and tree-planting to whether concentrating forest management close to people’s homes was actually effective. It also looked at whether runaway wildfires might have beneficial effects and what chance Americans may have to catch up on the backlog of forest work needing to be done.

“What we’re seeing unfold is ecological catastrophe,” review co-author Keala Hagmann of UW said. “And it’s setting back the recovery options, for both society and wildlife, in that region for who knows how long. Those old growth trees that burned this summer had survived seven extreme droughts in two centuries before 1918.”

Hagmann has extensive research background on the Bootleg fire in Oregon, which is frequently delivering smoke to western Montana as it blackens almost 415,000 acres. Her studies showed that region burned repeatedly over the centuries until 1918, resulting in a resilient variety of patches of forest and meadow vegetation.

But the national fire suppression strategy of the 20th century Smoky Bear days actually made the Bootleg area more prone to catastrophic wildfire. Fuels piled up on the ground and young trees filled in the open spaces that used to help slow down flame spread.

Fire suppression has succeeded in containing about 97% of annual fires. But the 3% that escape consume 90% of the area burned.

The UW synthesis study highlighted what it called misconceptions in what forest treatments can do and why they should be done. For example, thinning and using controlled burns to change fuel loads often won’t protect homes on the wildland-urban interface or make the fire easier to fight. But they will modify the fire in ways that improve the future forest.

“If fuel treatments are designed such that the next wildfire can be allowed to burn with limited or no suppression, then three economic and ecological objectives might be achieved,” the study found — “reduced suppression costs and actions, management of future wildfires as effective fuel treatment maintenance and favorable ecological outcomes in areas treated before wildfire.”

And while the term “restoration” gets thrown around a lot in firefighting debates, the study warned that tomorrow’s treatments won’t bring back yesterday’s forests.

“In a majority of cases, forest management and fuel reduction treatments will not return landscapes to any historical condition or fire regime, nor is that a particularly useful premise on which to base adaptive forest management,” the report said.

Instead, land managers need to work toward helping forests adapt to hotter, drier conditions with more people and their resources mixed into the scene.

“That’s why climate change has to enter into these conversations," said University of Montana fire ecologist Phil Heguera, who also participated in the UW study. “We’re going to experience more days of extreme fire danger in the future. We’re not at a new normal. We’re in adjustment phase.”

In order to avoid fires like Oregon’s Bootleg, more early- and late-season treatments like Primm Meadow need to happen, the studies conclude. Much of that wood won’t have a commercial value, requiring taxpayer subsidies to accomplish.

“Right now we’re subsidizing wildfire suppression and emergency care and rebuilding — Is that what we want?” asked Hagmann. “Or do we want to subsidize managed fire that restores and creates more options for ecology and society? We can continue to work against nature, but that’s like holding back a flood.”

That may mean more smoke in spring and fall as those thinning and burning projects nibble away at a century’s backlog of forest fuel. But it may also mean fewer communities burned over, and faster wildlife and scenic landscape recovery after the summer wildfires that will occur.

“The cost of suppressing wildfire is going up, the cost to communities is going up, but the investment in creating resilient forests adapted to fire hasn’t gone up,” TNC’s Schaedel said.

“A hundred and ten years ago we made a concerted effort to take fire off the landscape through fire suppression," he added. "Our historic logging practices removed a lot of large, fire-resilient trees like the Ponderosa pine and western larch. On top of that, the western climate is getting warmer and drier, and the fire seasons are growing longer. Our efforts to get ahead of the fires has stayed pretty stagnant.”

Where does wood come from? Nature and business shape Montana's forests

PRIMM MEADOW – What lesson should we take from a walk through this 500-year-old stand of Ponderosa pine?

POTOMAC – The roadkill deer Adam Lieberg hauled in for snacks on his latest venture into Gold Creek smelled ripe enough to wake a grizzly bear.

As of Friday, AIS Bureau Chief Tom Woolf said 49 boats have been noted as having aquatic invasive mussels, far surpassing the 35 boats with mussels detected last year which, at the time, was the all-time record.

A cold front knocking temperatures 20 degrees below normal pushed into western Montana on Tuesday, giving relief to firefighters across the no…

If the American Fork wildfire radio chatter has a Brooklyn accent next week, just know the FDNY has reported for duty.

Lolo National Forest fire managers will start prescribed burns in and around the Missoula area this week, as conditions allow.

Science has clear evidence but a muddled message about how to treat forests and protect homes from wildfire, local researchers said in response to national controversy over fire management.

The Montana Department of Transportation has about half the number of seasonal snowplow operators needed to cover the state’s highways.

A member of the Lolo Hot Shots uses a drip torch to ignite part of a prescribed burn on Blue Mountain in 2015.

The 112-acre Primm homestead and its huge Ponderosa pines along the west fork of Gold Creek are evidence of the value of repeated, low-intensity forest burning to make old-growth stands more resilient to wildfire.