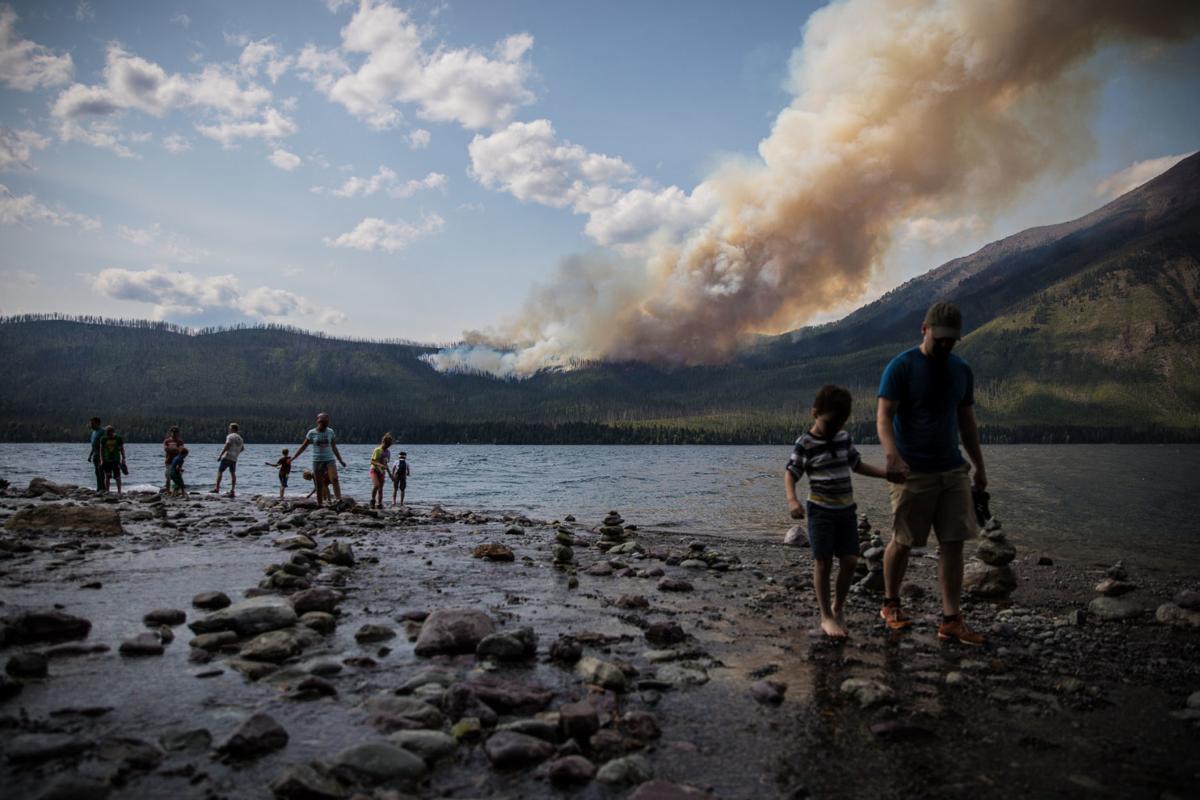 The Howe Ridge Fire is seen from Lake McDonald Lodge. 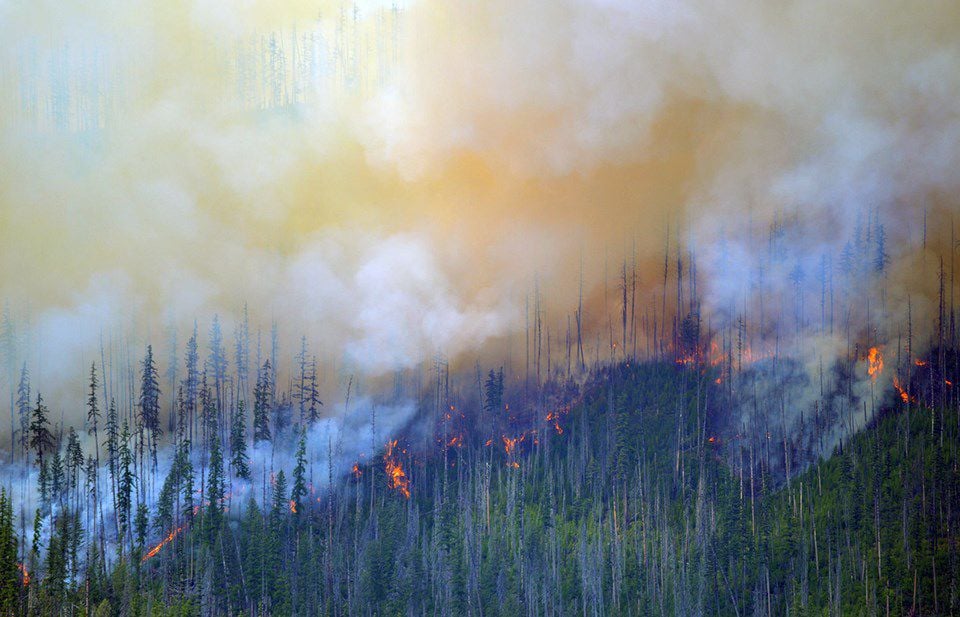 The Howe Ridge Fire burning in an area previously burned by the Robert Fire in 2003.

COLUMBIA FALLS — The perimeter of the show-stopping Howe Ridge fire is less than a mile from Going-to-the-Sun Road, according to a map distributed at a community meeting in Columbia Falls Saturday night.

Protecting the scenic highway is a top priority for the 126 personnel assigned to the fire, said Rocky Gilbert, operations chief for the Type 1 Incident Management Team that’s assumed command of the area’s four major fires. The fire grew about 500 acres Friday night to top the 4,000-acre mark Saturday.

“If we have fire along there, what we’d be dealing with is trees and rocks falling along that road for years to come because of the destabilization,” Gilbert said.

In addition, he said that firefighters aim to lay hoses and build fire line in an unnamed drainage that runs perpendicular to the road, about two miles north of Lake McDonald’s northern tip

Firefighters are also building line along the Inside North Fork Road, about 2 miles north of Apgar Village on the lake’s west shore. Kelly’s Camp, Gilbert said, has been equipped with pumps, hoses and sprinklers and is being monitored daily by firefighters.

While aircraft have assisted firefighters throughout the past week, Gilbert said their operations were “very limited” by conditions.

“That lake holds smoke like nobody’s business,” he said, adding that the pilot of the lead CL-215 “Super Scooper” recently could not see the fire because of all the smoke.

In addition to Howe Ridge, the Whale Butte, Coal Ridge and Paola Ridge fires all are burning near Glacier’s perimeter, and each measure a few hundred acres. Glacier National Park Superintendent Jeff Mow said at Saturday’s meeting that the park often functions as a “catcher’s mitt” for fires that start nearby.

Mow and other speakers stressed that the agencies fighting these fires all had to plan based on limited resources, a dynamic that he expects to continue for quite some time.

“These are fires that we’re going to sit with until snow flies,” he predicted, “and our ability to address that is really dependent on resource availability, and as you know resources are scarce right now.”

The Howe Ridge blaze prompted officials to shut down the Lake McDonald Lodge on Friday through the rest of the 2018 season. Going-to-the-Sun Road is also closed between Apgar and Logan Pass, and guided horseback rides and boat tours are also off the table. The Whale Butte fire, burning in the Flathead National Forest near Polebridge, has spurred National Park Service officials to issue an evacuation warning for landowners and visitors in all park areas north of the Bowman Lake Road junction with Inside North Fork road.

Earlier this week, the fire nearly trapped camper Justin Bilton and his father, who were camping near Lake McDonald and attempted to drive out when the fire approached.

"My 70-year-old dad and I were stuck at a trailhead at the end of a dead-end road near Lake Macdonald in West Glacier, MT," Bilton wrote in a post that accompanied his video on YouTube, which showed flames licking at the sides of the road, and embers raining down upon the car. "The wildifre [sic] was between us and the only way out. After we reached the downed, burning tree seen at the end of the video, I had to reverse all the way back to the trailhead, where we were lucky to flag down a boat. We were rescued by two park employees and taken to safety. The car burned in the fire."

Isolated thunderstorms were forecast for late Saturday. Those storms could kick up winds that would increase fire behavior.

A community meeting focused on the Whale Butte, Howe Ridge, Coal Ridge and Paola Ridge fires is scheduled for 6 p.m. Sunday at the Sondreson Community Hall near Whale Creek.

Elsewhere in western Montana, the Davis fire 10 miles northwest of Yaak had garnered 184 fire personnel including three hand crews, one helicopter, three engines, a dozer, a skidgeon, eight water tenders and one masticator by Friday as hot spots on the fire's edge became more active. The fire's acreage remained listed at 5,724 acres on Saturday. The fire is 5 percent contained.

In southwest Montana, the 1,989-acre Beaver Creek fire 18 miles northwest of Wisdom is 8 percent contained. The area was forecast for scattered showers and thunderstorms Saturday. The fire is burning next to the Meyers fire site from 2017 and the Mussigbrod from 2000. Crews are currently constructing contingency lines around the area.

Glacier fire could bog down reconstruction of Sperry Chalet

The century-old Lake McDonald Lodge in Glacier National Park, which was evacuated last weekend due to the Howe Ridge wildfire, will not re-ope…

MARIPOSA, Calif. — Ann Hansen is young, but she isn’t letting that stop her from living her dream, even if it is a dream fraught with danger.

Rain gives Glacier firefighters a respite; air throughout Montana improves, except in northwest

A half-hour rainstorm and shift in winds at Glacier National Park on Monday markedly improved visibility and air quality at Apgar Village, all…

The Howe Ridge Fire is seen from Lake McDonald Lodge.

The Howe Ridge Fire burning in an area previously burned by the Robert Fire in 2003.