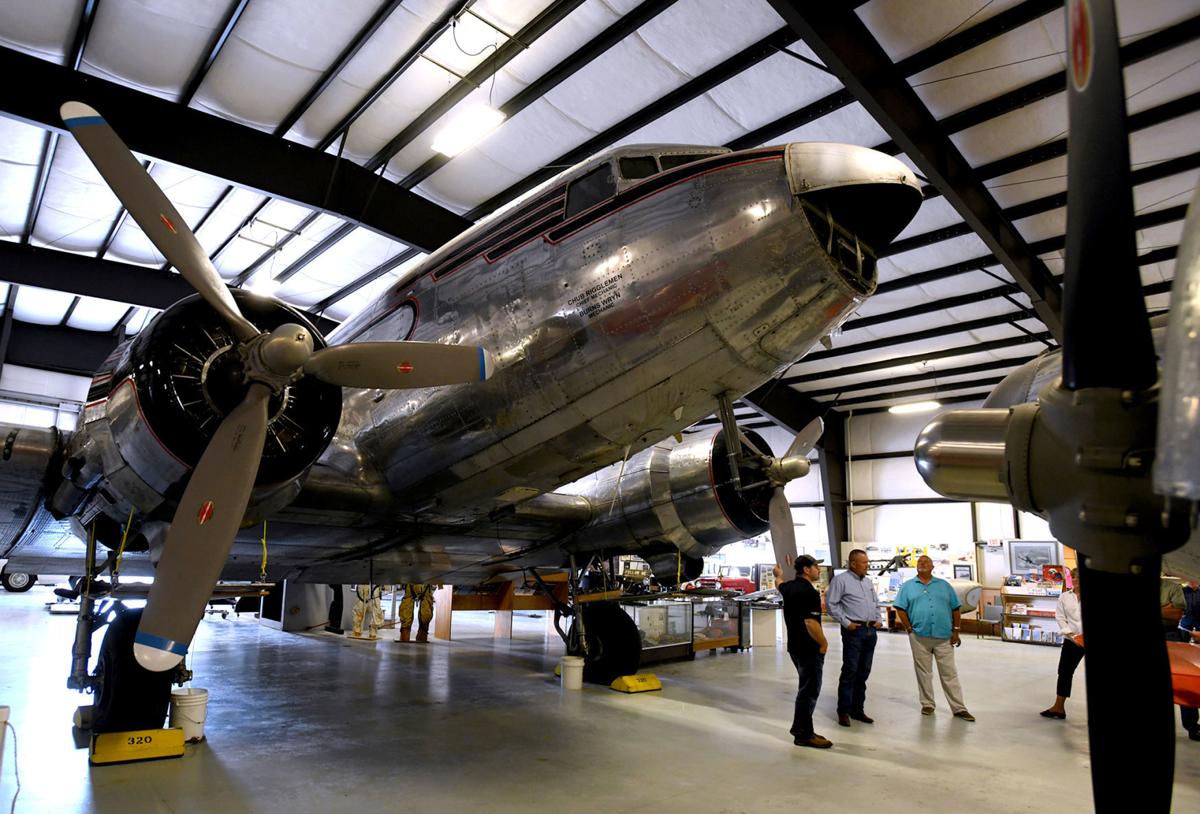 Eric Komberec, Bryan Douglass and Mike Anderson (left to right), standing under the C-47 that flew smoke jumpers into the famous Mann Gulch fire in 1949, discuss the logistics of flying the plane to Europe next year for the 75th anniversary of D-Day. The centerpiece of the Museum of Mountain Flying in Missoula hasn't been airborne since 2001 and will need to be brought up to federal standards for the flight. 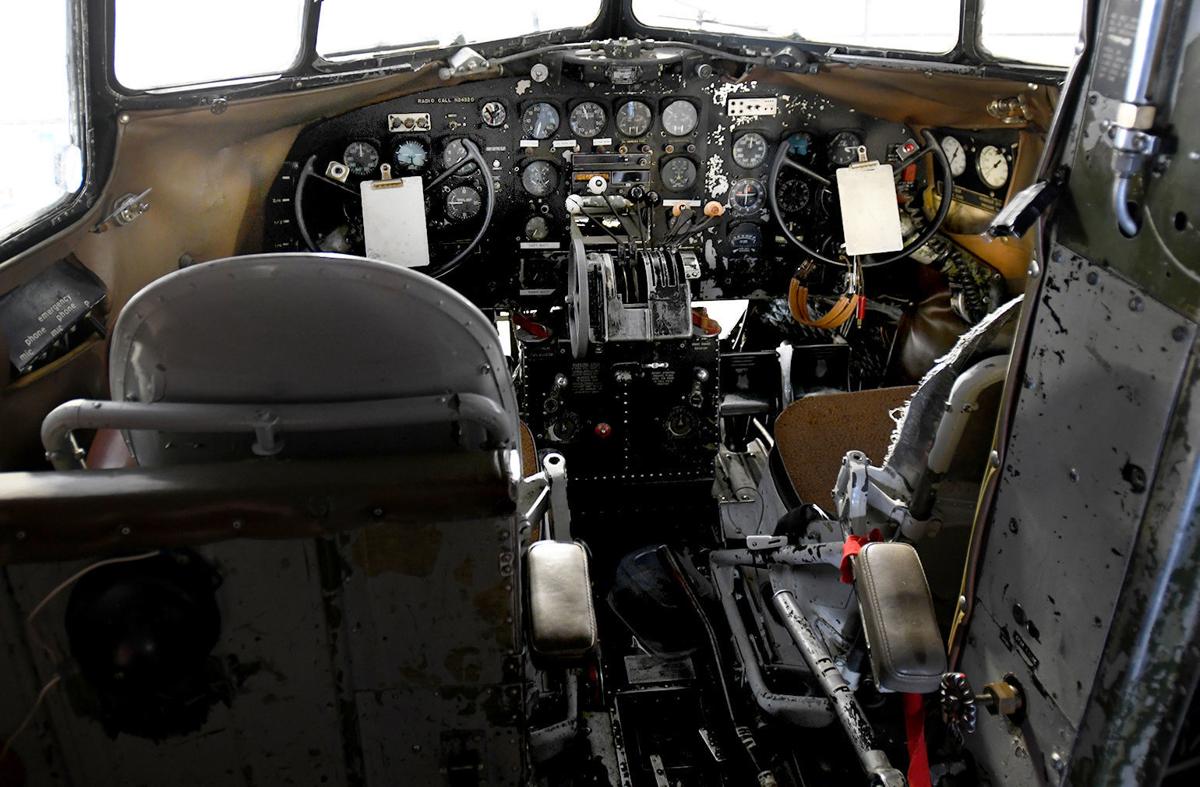 The cockpit of the plane, dubbed Miss Montana, shows wear from three decades of service for the Missoula-based Johnson Flying Service beginning in 1946. 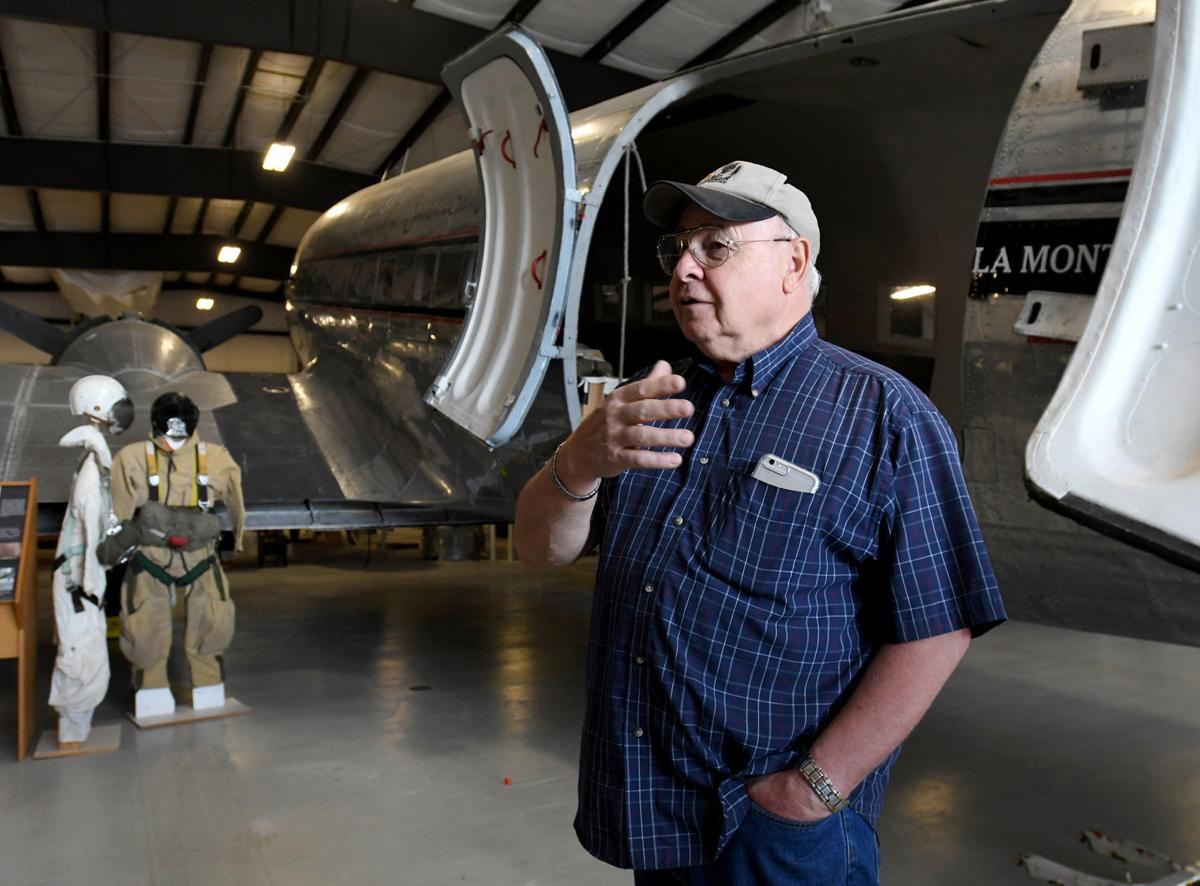 "This airplane survived for a reason," says Dick Komberec, who was among the pilots who flew the plane for Johnson Flying Service. "This is a veteran. See all the war wounds? This thing would probably drop, on average, 1,500 to 2,500 jumpers a year, training jumps and actual jumps, every year for 35 years."

Eric Komberec, Bryan Douglass and Mike Anderson (left to right), standing under the C-47 that flew smoke jumpers into the famous Mann Gulch fire in 1949, discuss the logistics of flying the plane to Europe next year for the 75th anniversary of D-Day. The centerpiece of the Museum of Mountain Flying in Missoula hasn't been airborne since 2001 and will need to be brought up to federal standards for the flight.

The cockpit of the plane, dubbed Miss Montana, shows wear from three decades of service for the Missoula-based Johnson Flying Service beginning in 1946.

"This airplane survived for a reason," says Dick Komberec, who was among the pilots who flew the plane for Johnson Flying Service. "This is a veteran. See all the war wounds? This thing would probably drop, on average, 1,500 to 2,500 jumpers a year, training jumps and actual jumps, every year for 35 years."

Take an historic, over-the-hills smokejumper plane that was last airborne in 2001, fix it up to federal standards, and fly it to Europe next year for the 75th anniversary of D-Day.

Maybe even drop jumpers into France, pulling ripcords of old-fashioned round parachutes and wearing suits their grandfathers used during the Normandy invasion in France on June 6, 1944.

And while you’re there, hit Germany to take part in the 70th anniversary commemoration of the Berlin Airlift (1948-49).

That's the dream of the Museum of Mountain Flying at the Missoula airport, where the historic Johnson Flying Services C-47, known by many as the Mann Gulch plane, sits as the centerpiece.

In just a few weeks the dream, bolstered by devotees of old planes, smoke jumping and World War II, among others, has assumed a tangible air of reality.

D-Day is commemorated every year on the French coast, an annual event that touches all who take part. Because June 6 falls on a Wednesday this year, many of the parades and historic marches, sightseeing tours, military fairs, camp reconstructions, parachute drops and exhibitions are taking place this weekend.

But the 75th anniversary in 2019 promises to be unique.

“This will probably be the last major D-Day anniversary where veterans are alive to attend, so it just won’t ever happen again,” Douglass said. “We’ve got this remarkable airplane here. It’s just got to be there.”

“There” will first be Duxford Field in England, where Douglas C-47 Skytrains, or Dakotas, from around the world will meet and practice for “Daks Over Normandy.”

The workhorse transport planes dropped most of the 24,000 Allied troops who landed by parachute or glider in German-held territory in Normandy on those fateful nights and days in 1944.

It’s been called the boldest and most successful large-scale invasion in military history and resulted, after months of intense fighting, in the liberation of France. The final domino to fall was Adolf Hitler’s Nazi Germany the following spring.

The formal launching of the Miss Montana to Normandy campaign isn’t until June 15-16 at the regional Aircraft Owners and Pilots Association (AOPA) fly-in, the largest gathering of aircraft Missoula has ever seen.

But already support from around and outside Montana is pouring in.

“It’s unbelievable,” said Eric Komberec, a pilot and trainer of pilots for Neptune Aviation of Missoula, who’s the project chairman. “Everybody you talk to and mention it to is on board and very interested in it."

In aviation circles, Montana's prize C-47 is referred to as N24320. She’s been redubbed “Miss Montana” and will wear that name on her nose to Normandy.

“It reflects really the representation of the whole state,” Douglass said. “It’s the only one in the state, as far as I know of, and it’s historic to the state, Mann Gulch and to Johnson Flying Service.”

Katy Anderson said a website and Facebook page with the brands “Miss Montana to Normandy” are up this weekend. The committee can be contacted at missmontanatonormandy@gmail.com.

Many others have expressed interest in helping out in what will be a year-long process to make Miss Montana airworthy.

“All these people that we know have said, ‘Count me in, I’ll move to Missoula to work on the airplane,’ ” Dick Komberec said. “That’s how they feel about it.”

“With everyone’s help and support we will be managing this project with very structured and organized trained professionals with Part 121 airline expertise and safety culture backgrounds,” Eric Komberec said.

Empire Airlines in Coeur d’Alene, Idaho, has agreed to take on the role of aircraft airworthiness and regulatory compliance. Neptune Aviation is lending full support. A number of banks and local businesses are on board or have promised they will be.

Come mid-June, after the AOPA fly-in, Miss Montana’s propellers will be removed and sent away to be overhauled. An expert in Grangeville, Idaho, will tear into and rebuild what needs to be rebuilt of the engines, one of which has only 30 hours on it.

“We’re going to do this right,” Eric Komberec said. “It’s going to be first class. Then we’ll be able to fly the airplane for years to come.”

Still there’ll be room for interested volunteers, who can help streamline operations under the watch of seasoned mechanics.

The committee is on the lookout for Normandy survivors, several of whom lived in western Montana until passing away in recent years. Dick Komberec said the flight can be a way of honoring the likes of Dennis O’Loughlin, who as a “pathfinder” was among the first to parachute into Normandy and later wrote about his experiences. O’Loughlin died in 2008.

Miss Montana came off the assembly line in Long Beach, California, on May 3, 1944, a month before D-Day. A military plane, she wasn’t part of the invasion, and the war was over before she could be deployed overseas.

“She was commissioned to fight and she didn’t have the opportunity to fight, and so we’re taking her back to Normandy,” said Katy Anderson. “She gets to finish her mission.”

N24320 was one of four C-47s — the military versions of DC-3s — that Bob Johnson bought as military surplus after the war. Johnson Flying put three of them into service until the company was sold in 1975. Dick Komberec said one was eventually totaled by a hotshot pilot in Texas. Another is at the bottom of the ocean off the coast of Florida, after it was forced down while running drugs.

“This is the survivor of the three,” said Komberec, who flew all three for Johnson from 1969-1975 and later became a commercial airline pilot.

Miss Montana famously flew 12 smokejumpers from Hale Field in Missoula to their deaths on the Mann Gulch fire north of Helena in 1949. The tragedy was immortalized in Norman Maclean's "Young Men and Fire." At least one of the victims, 24-year-old David Navon of California, was at Normandy in ’44.

Almost forgotten in the airplane's history was a December 1954 crash landing into the Monongahela River near Pittsburgh. Miss Montana was transporting American servicemen home from Germany for Christmas when she ran out of fuel. The plane emerged relatively unscathed after Capt. Harold Poe made a smooth night-time landing close to shore. Passengers and crew scrambled onto the wing but several didn’t make it to land before the plane floated into the channel and sank.

Poe made several rescue forays into the icy river but didn’t return from the last one. A Johnson employee from Seattle, he was one of 10 men who lost their lives that night.

“This airplane survived for a reason, is the way I see it,” Dick Komberec said.

One of the founders of the Museum of Mountain Flying, Komberec flew N24320 dozens of times for Johnson. He was at the helm on her last trip out of Missoula in 1975 after Johnson sold the company to Oregon-based Evergreen International.

The plane resurfaced in the 1990s when Komberec, flying a 767 for Delta, spotted her among three DC-3s at McNeely Charter Service in West Memphis, Arkansas. With help from Missoula air enthusiasts and businesses, the museum bought the aircraft for $125,000 in 2001. Komberec piloted her home, taking a detour on the way to circle Mann Gulch, “just for the hell of it,” he said.

Miss Montana assumed her place of honor when the flying museum opened in an airport hangar in 2006. She’s well-maintained and fired up several times, but the aircraft that's nearly 65 feet long and 17 feet high with a wingspan of 95 1/2 feet, hasn’t left the ground since she arrived in Missoula 17 years ago.

But there’s always been a dream to get her back in the sky, and Daks Over Normandy has afforded that chance. Her connections to the military, to smokejumpers, to 1944 and to Montana shouldn't be ignored.

“It’s the right thing to do,” said Mike Anderson, who jumped out of planes with an Army Airborne unit in the 1970s and owned Gull Sky in Missoula for more than 40 years.

Like many, Anderson is drawn by the spirit, honor and memory of those who fought on the beaches and in the fields and towns of France all those years ago.

“Those guys did the heavy lifting,” he said. “Without them, none of us would be sitting here today having this conversation in English.”

To learn more or to contribute to the Miss Montana to Normandy project, check out the website missmontanatonormandy.com or the Facebook page "miss montana to normandy." Organizers can be contacted at missmontanatonormandy@gmail.com or call Eric Komberec at 406-240-0395 or Bryan Douglass at 406-543-9612.

SEELEY LAKE — Ron Cox stood on the grounds of Tamarack Resort on Friday and pointed westward.