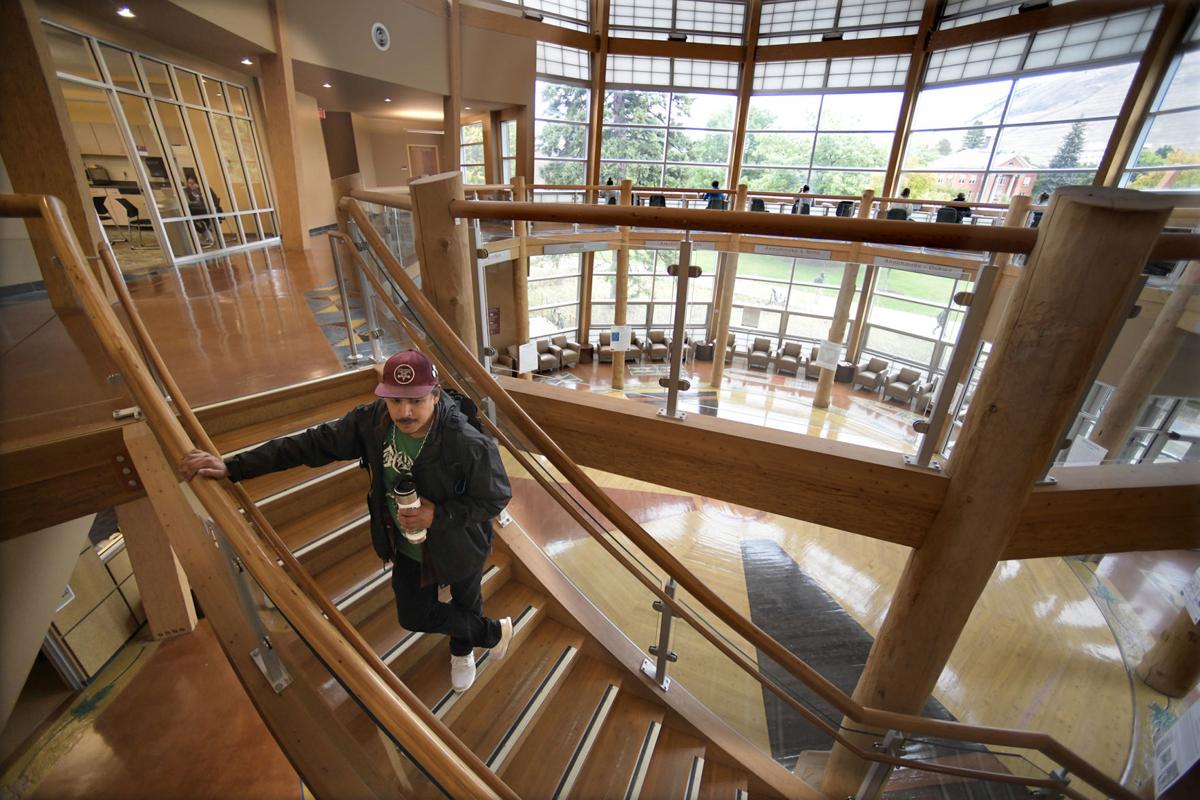 Stephan Chase, of the Diné (Navajo) tribe in Arizona, pauses on the staircase in the Payne Family Native American Center on the University of Montana campus Thursday. UM's decision to eliminate an academic adviser position within the Native American Studies department has some faculty, Native students and staff concerned. 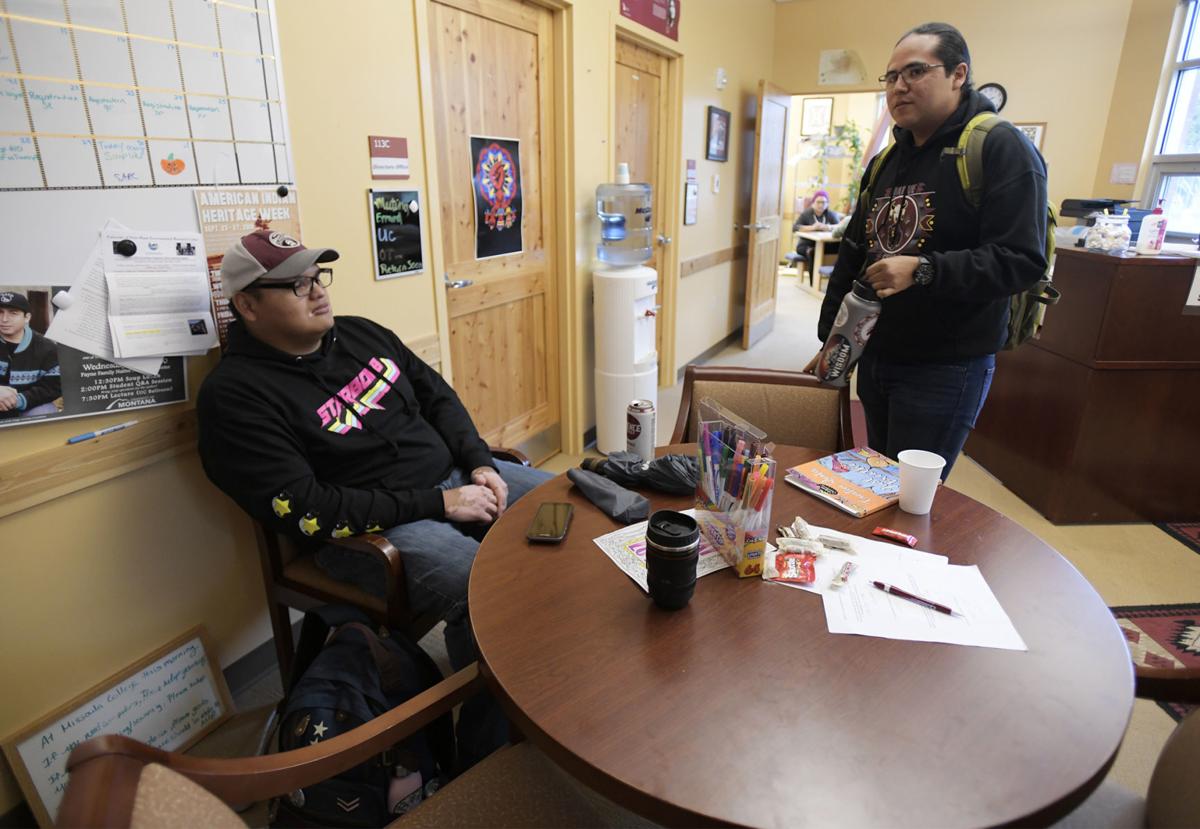 “You come here, and they expect you to know what to do,” the UM student said last week. But when Fish transferred here from Blackfeet Community College two years ago to pursue a major in Environmental Studies and minor in Native American Studies, he hit some bumps in the road.

“For me, I got put in classes I wasn’t even supposed to be in. I got put into a graduate class,” he said. And in a confusing situation like this, he said, “it helps going to advisers. Several people I took as advisers helped me.”

At UM, academic advisers help students register for courses and complete their curriculum. In practice, advisers also help students navigate and troubleshoot all kinds of bureaucratic and administrative issues that college life presents, and the campus is sharpening its emphasis on advising in a quest to help students stay in school and graduate on time.

UM administration has recently been placing a greater focus on both advising and Native American students' needs. University spokeswoman Paula Short wrote in an email “the Office of the Provost previously authorized a half time position in American Indian Student Services to increase support for all Native American students, and work is currently underway to finalize the position and begin a search.” Friday, UM President Seth Bodnar welcomed Brad Hall, a former Blackfeet Community College administrator, to campus as UM’s new Tribal Outreach Specialist.

This semester, Native American enrollment increased to 490 from 469 last fall at the Mountain Campus.

On the advising side, in summer of 2018 UM's College of Humanities and Sciences replaced department-by-department advising with a centralized, academic adviser position, a move that aimed to increase the total number of staff and improve student access. But amid these gains, some faculty, Native students and staff are concerned because a well-placed adviser position within UM's Native American Studies Department went dark.

A combination of advising credentials and knowledge of Native students’ needs is vital to their success, said Joseph Grady. A member of the Blackfeet tribe, he attended UM from 2007 to 2011 and is back this semester to finish up his degree in Social Work and Native American Studies.

“It's a big deal, to be able to go and sit with an adviser and say ‘Hey, look ... I was really given an attitude when I was last up at Financial Aid for the fifth time trying to seek out answers and then being in many cases dismissed.’” The person in that role, he continued, also has to be prepared for more than nuts-and-bolts complaints. “It’s important to be able to walk through the door, sit down with that adviser and say, ‘You know what? I think I was unfairly judged in this surrounding. Can you help me understand?”

“To have a leader in that position with a Native lens is really important for students, to not only feel like they've been listened to, but to have somebody with that experience help them navigate the challenges of emotions that come along with that, the sense of disenfranchisement, the sense of disrespect, to then find a success beyond those interactions.”

Prior to last academic year, UM’s Native American Studies Department had an academic adviser post. Gisele Forrest said it was well-suited to that group’s needs. “A large number of Native American students do come to our building,” said Forrest, Native American Studies’ program coordinator and a member of the Fort Peck Assiniboine Tribe. “As a former student, I would feel more like I belonged here if I saw someone like me" in the adviser's office. "That’s who I trust to be my network of support.”

Now, instead of Native American Studies having its own adviser position, students with that major instead receive advising from Olivia White, who also has responsibility over World Languages and Cultures, Environmental Studies and African-American Studies majors, according to UM.

“It’s been a very tricky transition” to the centralized advising structure, said White. “I think that when this was centralized, we were assigned departments and there was not much input as to how that went about.”

“I think basically what it gets down to is representation,” she said. “ ... There was no American Indian representation within the Advising Center and there had been that before. And I think the struggle has been trying to convince the administration that representation matters.”

Michelle Guzman, who most recently held the academic adviser position full-time, now leads American Indian Student Services. “We want them to be successful while they’re here,” she told the Missoulian on Thursday, explaining that she works to connect students with programs like the writing center and TRIO student support services for disadvantaged students. In the American Indian Student Services office, students were playing chess and preparing a beadwork activity. Lakota Gray Hawk, one of the students hanging out in the center, said he'd just transferred from Fort Peck Community College and the semester had been going smoothly so far.

“Just anecdotally, I have, this fall … had four different Native students come into my office with advising questions, two of which were Native studies majors and two of them weren’t, and had to take a great deal of time in order to ensure that all the paperwork was right and in order for them to continue.”

“They had attempted to go to different places on campus where they were sent from one office to another trying to resolve those issues.”

None of the current or former students the Missoulian spoke with for this story said they had been unable to access advising services. But several said the change had made advisers a bit harder to find and a bit less approachable — and could spell trouble for students new to the complexities of campus life.

“She’s at that building,” Brandon Fish, the environmental studies major, said of White, the adviser who now handles his department and Native American Studies, pointing across the rain-drenched Oval.

Don't underestimate a small hurdle, Grady said. In many cases, "we just need a little bit of resistance, or a lack of support for students to say, 'You no what? I do better back home and I feel more a part of my culture when I'm home."

Professor Beck, having seen four students come into his office this fall, wonders how many more will take that route. “In many cases where Native students run into barriers like those ... their response is often to just go home, and that’s the last thing we want.”

This fall, UM’s Native American enrollment inched up at least 9.6%. Last spring, however, it had dropped 35% since fall 2013 for both the main campus and Missoula College.

But administrators are eyeing ways to iron out the system's wrinkles. UM's Brian French, executive director of the Office of Student Success, told the Missoulian that strengthening the relationship between academic advisers and other offerings, like American Indian Student Services is "critical."

Brad Hall, the new tribal outreach specialist, also will be working with Bodnar on retention and recruitment practices. He said he was meeting with advisers and was quick to acknowledge their importance. With the unique needs that Native students have, he said, advising for them is "a different type of support, and it's beyond the scope of what advising has been in higher education," he said.

"Designing what that looks like is something that, I think, is really important to me," Hall said.

This article has been updated to correctly reflect Brad Hall's status. He is not a member of the Blackfeet tribe.

In Montana, challenges abound for students, but new solutions are emerging

Naquan Williams works a late night shift at a pizzeria that keeps him on the clock until 4 a.m.

DILLON — The University of Montana–Western appeared to some community members to be on the brink of closure more than a decade ago.

Under the M: On the road, but back on campus

Sorry for the lag since last newsletter, Under the M subscribers. These past two weeks, I’ve filled in for colleagues to cover a Missoula City…

About 20 demonstrators protested a Canadian gas pipeline in Missoula Monday.

Stephan Chase, of the Diné (Navajo) tribe in Arizona, pauses on the staircase in the Payne Family Native American Center on the University of Montana campus Thursday. UM's decision to eliminate an academic adviser position within the Native American Studies department has some faculty, Native students and staff concerned.