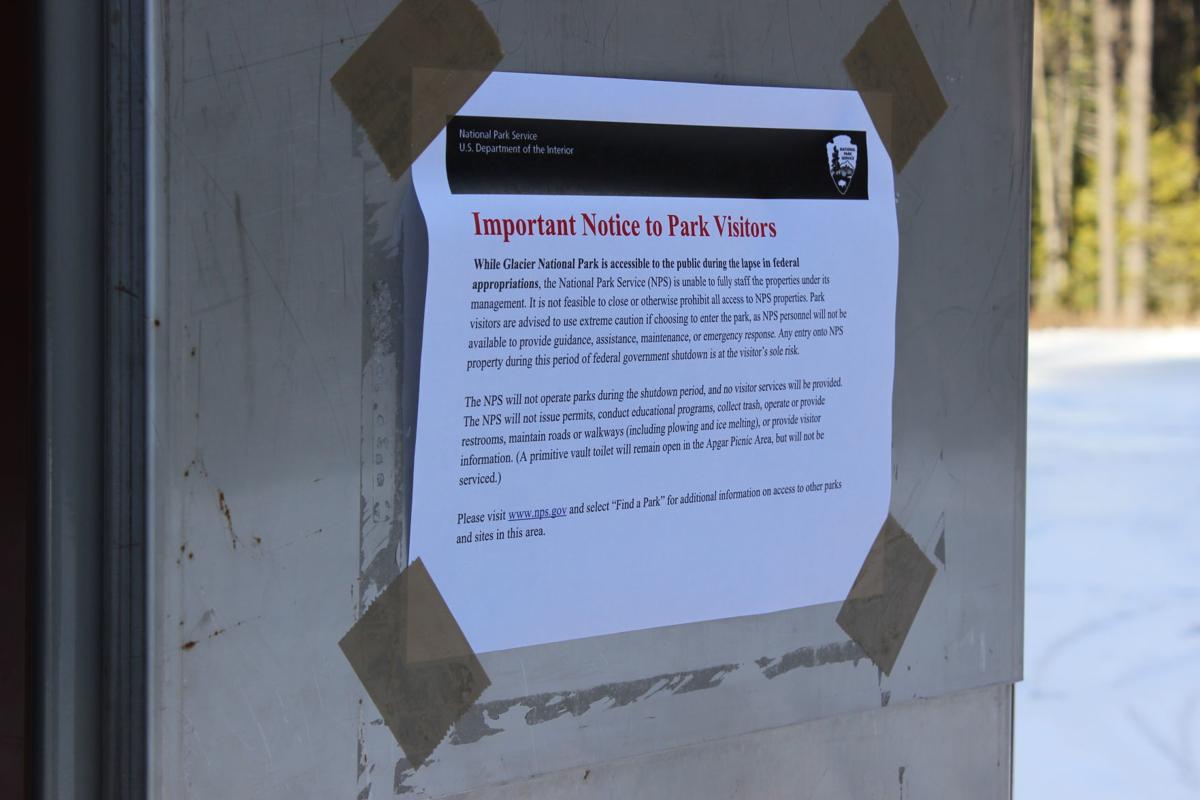 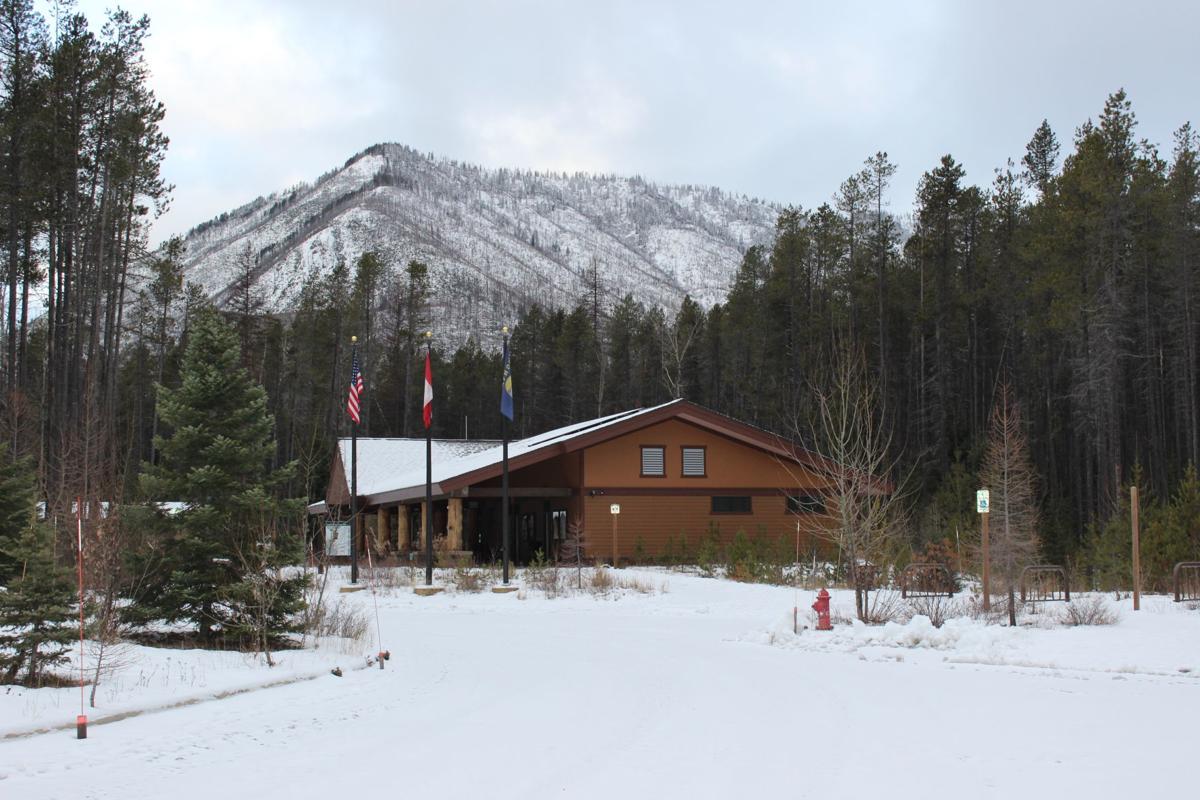 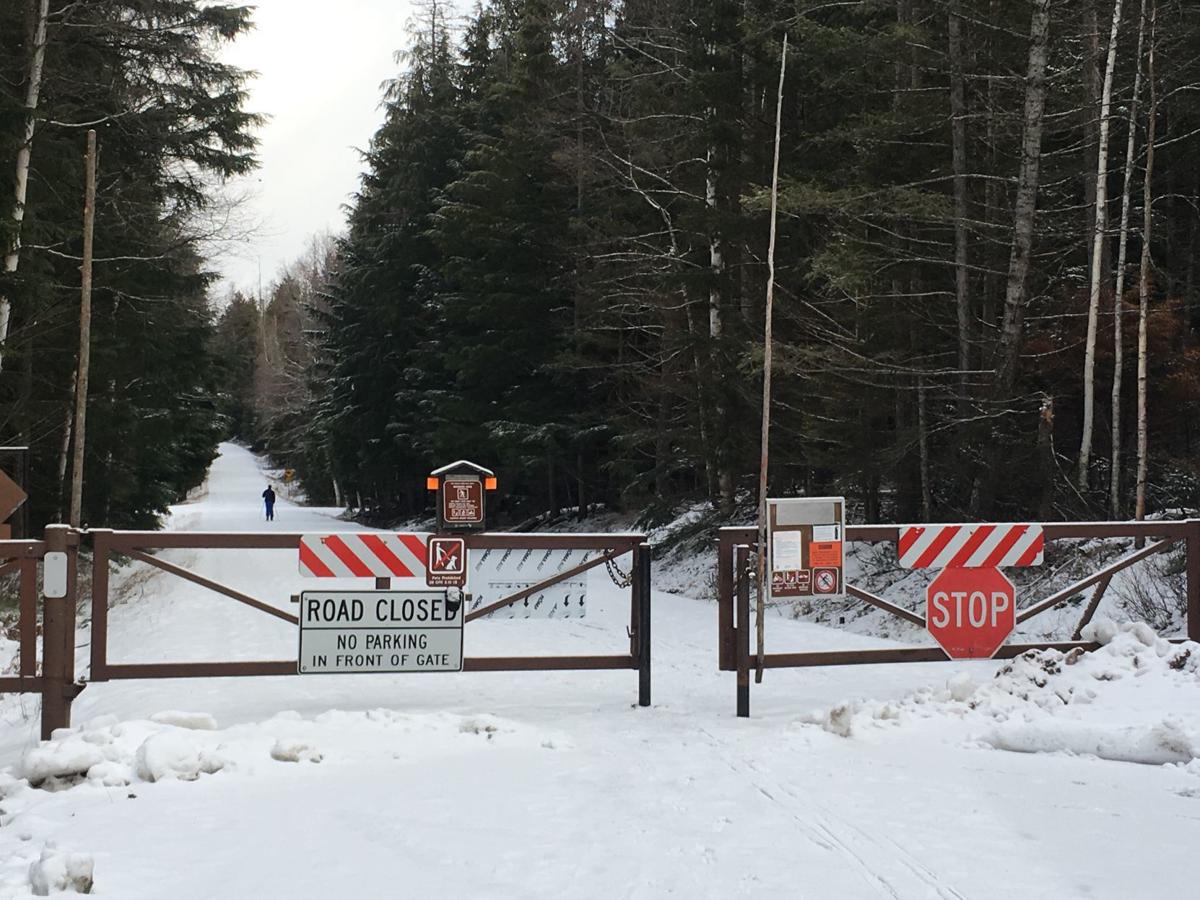 A cross-country skier heads out from Lake McDonald Lodge onto Going-to-the-Sun Road on Saturday. The famous highway's central stretch is closed to traffic for much of the winter.

WEST GLACIER — A deadlocked Congress was hardly necessary to shut down Glacier National Park. Winter pretty much did the job.

“We were already expecting everything to be closed,” said Susan Berg of Portland, who arrived in the park Thursday with her husband Adam. They were standing near Lake McDonald Lodge, already shuttered for the season, and the barricade that closes Going-to-the-Sun Road’s central stretch to motorists during the winter months.

The pre-existing closures of many park businesses and services muted the partial government shutdown’s impact in Glacier Saturday. Visitors arriving through the park’s west entrance found a printed sign explaining that, “while Glacier National Park is accessible to the public during the lapse in federal appropriations, the National Park Service (NPS) is unable to fully staff the properties under its management.”

It urged guests to exercise extreme caution in the absence of park staff, and stated that no park services, including restrooms, would be provided. This was in keeping with Department of Interior shutdown protocols that keep only the most essential staff working, and permit as much access as possible without services.

The Apgar Visitor Center’s gift shop was closed, and by midday, printed “Closed” signs had been taped to its restroom doors. However, they remained unlocked and heated, and the visitor center’s WiFi remained available. The Glacier National Park Conservancy had offered its gift shop in the nearby West Glacier train station as an information center, but it too was closed Saturday.

Most of the private businesses that cater to visiting tourists in Apgar Village and West Glacier were also shuttered for the winter, when visitation drops from summer’s highs of a million per month to 10,000 to 12,000 guests.

“It hasn’t affected us at all,” Darwon Stoneman said of the shutdown. The owner and manager of Glacier Raft Company in West Glacier, Stoneman said “we have short-term rentals that go on there in wintertime, but that’s it.”

One business that was open in Apgar, the Montana House gift shop, hadn’t seen much impact either. Employee Teresa Byrd said that “it’s been typical.”

As a few prospective customers looked around the store’s locally made crafts, Byrd said that “it’s been normal so far, everyone’s been happy and cheerful.”

Even with much of Glacier off-limits to vehicles, the start of Christmas vacations, Saturday’s wintry-but-not-frigid temperatures, and a tranquility unmatched in summer offered plenty of reason to visit. Visitors arrived at a rate of about one car per minute, and many of them headed up icy Going-to-the-Sun Road to Lake McDonald Lodge’s parking lot, where they transferred to snowshoe, ski or hiking boot.

For Ion Aalbers, a Dutch native who now lives in San Francisco and was road-tripping from Salt Lake City to Vancouver, the shutdown hadn’t crimped his plans. “Definitely we were following the news yesterday to hear about what’s going to happen,” he said. It was “a little bit scary to be on a road trip for the national parks, [and hear] that the national parks might be closed, right?”

For Adam Berg, the shutdown had also caused some worries but few problems. “We took it into account and looked at ways it might affect us,” he said. They had some concerns about their return trip to Portland on Amtrak (the rail service is not expected to be affected in the short term), but otherwise weren’t concerned.

“It’s so empty anyways,” he said, “everyone should visit regardless of the shutdown.”

Tribes use caution amid government shutdown

A cross-country skier heads out from Lake McDonald Lodge onto Going-to-the-Sun Road on Saturday. The famous highway's central stretch is closed to traffic for much of the winter.