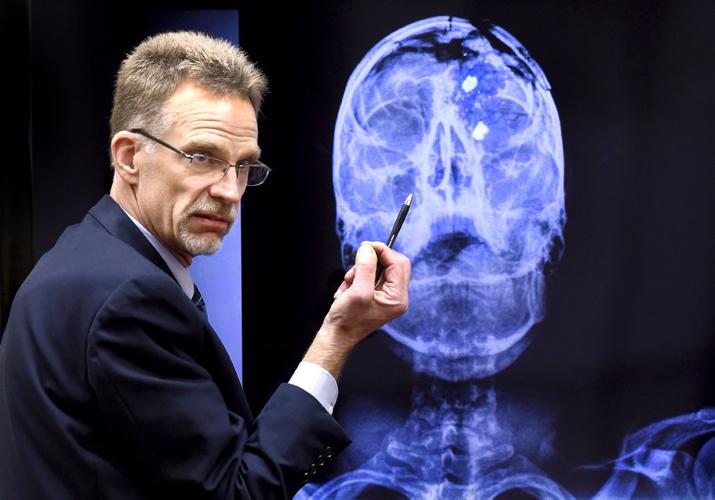 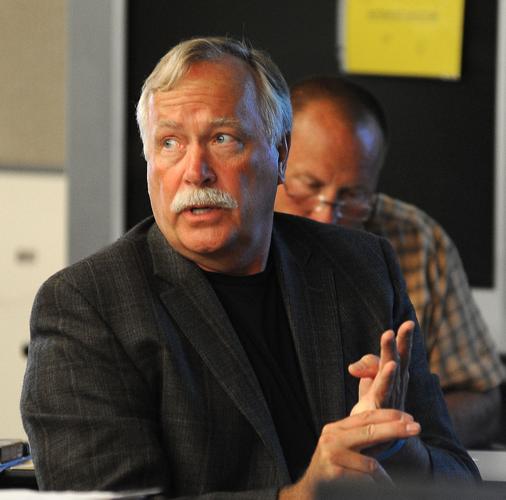 discusses the cause of death and toxicology results during a coroner’s inquest in August 2013. 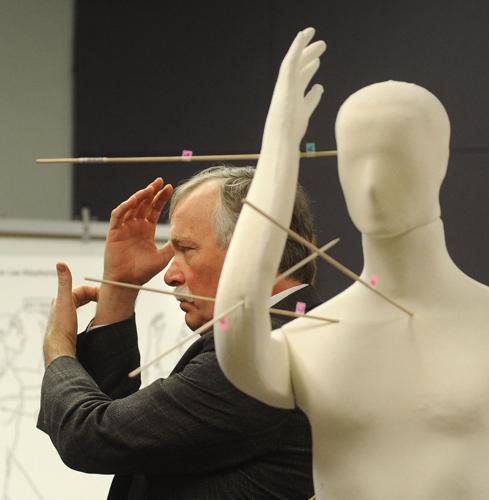 A forensic pathologist with a problematic record will no longer conduct autopsies for county coroners as an associate medical examiner, according to the Montana Attorney General's Office.

Thomas Bennett served as associate medical examiner in Montana since 1998, and appears to be a factor in the resignations of the state's chief medical examiners. Gary Dale resigned in April; Walter Kemp left on July 1, and mentioned Bennett's "un-appointment" in his letter of resignation.

Bennett conducted autopsies for coroners in eastern Montana through his private practice in Billings, Forensic Medicine and Pathology.

In recent correspondence, officials in the Attorney General's Office notified Bennett that his appointment would come to a close July 1. The State Medical Examiner's Office will hire a state employee to do autopsies in eastern Montana, and counties will no longer pay a fee for service to a pathologist appointed as an associate.

Now, forensic pathologists who do autopsies for coroners will be under direct supervision by the state medical examiner, Milburn said. The change means Bennett's practice will no longer perform autopsies for county coroners.

The departure appears to address one of Dale's major concerns. But it was a long time in coming.

The former medical examiner had requested Bennett refrain from doing autopsies on children more than a decade ago, when Bennett first began working in Montana, records show.

Bennett apparently refused to comply with the head examiner, who is appointed by the attorney general. The Billings doctor continued to do child autopsies through the administrations of four attorneys general.

Dale declined to answer questions for this story. Kemp was in the middle of a move last week and unavailable for an interview.

However, correspondence that is part of a court record shows that Dale repeatedly demanded Bennett refrain from doing autopsies on children. In a letter from 2000, Dale said he had reviewed three deaths Bennett "opined were ... due to 'shaken-slammed baby syndrome.' "

"It is my opinion that your continuing to conduct postmortem examinations of unexplained deaths of infants unnecessarily risks both wrongful prosecution of a caretaker and jeopardizes prosecution of the perpetrator if you are to encounter a truly injured child," Dale said in the letter.

In a 2005 letter, Dale informed county coroners and attorneys that any examinations of children by Bennett "are done so outside his appointment as an associate state medical examiner."

"Prior to coming to Montana in 1998, Dr. Bennett rendered problematic opinions regarding alleged non-accidental traumatic infant deaths in Iowa," Dale said. "Despite verbal and three written ... instructions by me to 'refrain from conducting Montana coroner-requested autopsies on children,' Dr. Bennett has continued to perform these examinations."

In September 2014, the issue came to a head at the Attorney General's Office.

"It's been something that we're still in some respects trying to get our arms around," Fox said.

However, he also said his team is putting into place a different model for autopsies conducted by the medical examiner, a structure designed to fix the previous lack of accountability, communication and peer review.

The attorney general has appointed Jaime Oeberst of Kansas as the incoming state medical examiner. She will hire two deputy medical examiners – one will work with her in Missoula and the other will work in Billings.

"We hope to have everyone on board and be fully operational this fall," Fox said.

Dale's concerns appear to have forced at least one of the changes he sought: Bennett will no longer do autopsies on children (or adults) for the state.

On June 24, the state informed Bennett his appointment would end.

In early May, Kemp may not have known such a change was around the corner when he announced he had taken another job.

Kemp, who served as deputy medical examiner under Dale, stated in his letter that he was taking a position at the University of North Dakota School of Medicine. However, he also said he was a native Montanan who had wanted to practice forensic pathology in his home state.

"I am leaving an unworkable situation, and moving into a very acceptable alternative position, but if the situation in Montana were different, I would never have been looking at other positions," Kemp said in his resignation letter.

The letter is not dated; the Attorney General's Office said it is from June 3.

In the letter, Kemp notes the three pathologists he appointed as associates would be "un-appointed" upon his departure.

"This step was done by Dr. Dale with his departure and was recognized as appropriate by the Attorney General's Office, in that I was required to re-appoint Dr. Bennett. I will leave that to the next incoming pathologist to re-appoint them," Kemp wrote.

In his letter, Dale had said his planned retirement in 2018 meant he would not be suited to lead the state through upcoming changes – with funding he anticipated the Montana Department of Justice wouldn't seek until the 2017 legislative session.

According to Phil Kinsey, who oversees the medical examiner, Kemp appeared excited about his new position as an associate professor, and the state did not attempt to retain him.

"We're all disappointed that Dr. Dale and Dr. Kemp have left," Fox said. "They admirably served the state for many years, and it's a loss."

Bennett did not speak with the Missoulian last week. His phone number returned a call, but the line quickly disconnected; subsequently, no one answered Bennett's phone number.

Fox said he did not believe any of Bennett's work on children would result in wrongful convictions because Dale and Kemp would have alerted the Attorney General's Office of any such cases.

The office did review some cases; officials declined to discuss any findings in detail due to legal constraints.

In Iowa, a couple was released from prison and exonerated of felony charges in 1998 after a judge found "false or misleading forensic evidence," according to the National Registry of Exonerations, a project of the University of Michigan School of Law. Bennett had declared the death a homicide.

Other child cases Bennett deemed homicides also came under fire. At least two court orders call his actions into question, including a Montana Supreme Court order in a felony assault conviction that cited his "problematic history." (The court was addressing controversy around Bennett as a possible expert witness.)

Former Attorney General Joe Mazurek is now deceased. Gov. Steve Bullock did not address the reason Bennett was allowed to conduct infant autopsies during his tenure as attorney general.

Chief Justice Mike McGrath, who also previously was attorney general, declined to comment through his assistant in the Montana Supreme Court.

"I spoke with the chief, and he has no comment," said judicial assistant Lorrie Cole. "It wouldn't be ethical for him to comment."

In a deposition, however, Bennett admitted he had continued to do autopsies on children because he had run the matter past his "friend" McGrath. McGrath told him he did not work for the state medical examiner, Bennett said.

A lawyer in Georgia took the deposition last August and provided it to the Missoulian.

As a forensic pathologist, Bennett testifies as an expert witness in wrongful death cases on behalf of automobile manufacturers. James Butler of Butler, Wooten, Cheeley and Peak took the deposition after hearing Bennett testify multiple times.

"He hires out to the automobile companies all the time. He comes up with this bogus theory about how somebody who got killed didn't suffer at all," Butler said.

Other medical professionals discredit him, and the literature contradicts his theories, Butler said. The lawyer said he had grown tired of the sham.

"I just got to the point where what Bennett does was offensive, you know?" Butler said.

In a job posting dated April 16 and listed as current last week, Bennett was advertising for a forensic pathologist to conduct autopsies with him in Billings.

"Dear Sirs: With the blessings of our State Medical Examiner's Office in Missoula, I wish to advertise for a qualified individual ... , " Bennett wrote in the post. Some of the language is identical to the state's posting for a head medical examiner.

In closing, Bennett again refers to "our office in Missoula."

Last week, chief of staff Milburn said Bennett did not have the state's blessing, contrary to the letter, and the Attorney General's Office requested the doctor remove the post.

Milburn also said the Attorney General's Office spent more time sorting out the controversy in the medical examiner's office than it has on any other matter except the budget.

As of last week, just one body from Missoula County had been transported out of state for an autopsy, according to Capt. Mike Dominick in the …

Statewide support keeps PURPLE program in place: All should learn about dangers of shaking a child

In Montana, we care, we support each other and we care about our children. Montana is called the last best place, and it is definitely a great…

A Spokane resident has been arrested and charged in connection with the murder of Jake Colvin, a 25-year-old man from Valley, Washington, who …

HELENA – Hospitals around the state are donating more than $80,000 to Healthy Mothers, Healthy Babies so the organization can continue an educ…

A forensic pathologist whose work on infant autopsies came under fire earlier this year has had a wide footprint in Montana.

Montana autopsies to be outsourced to other states in July

With the resignation of the only two state forensic medical examiners qualified to assist county coroners, Montana will outsource its autopsie…

CDC says one-third of Americans should be wearing masks

CDC says one-third of Americans should be wearing masks

discusses the cause of death and toxicology results during a coroner’s inquest in August 2013.