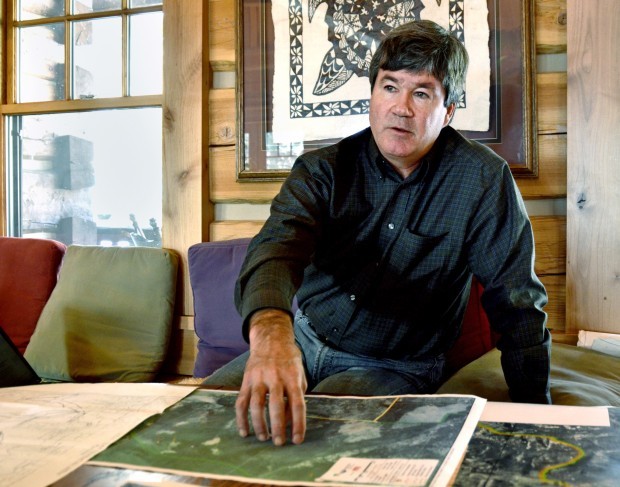 Tom Maclay explains years of difficulties trying to obtain permits for his proposed Bitterroot Resort at his home on Feb. 14, 2012. 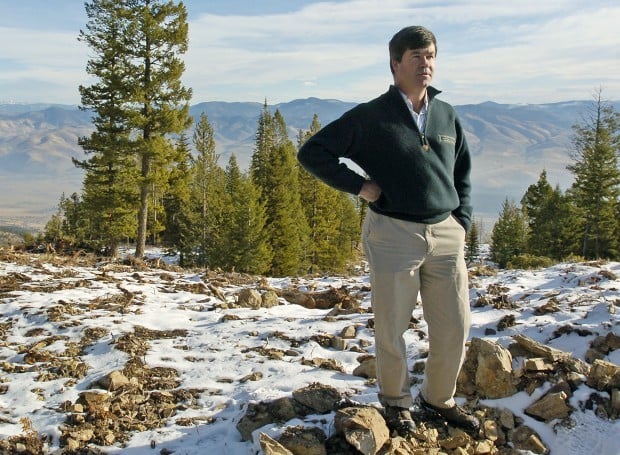 Tom Maclay stands on his property in 2004 where he envisioned a ski resort in the Bitterroot Valley.

HAMILTON – For the second time in seven years, the U.S. Forest Service has rejected a proposal by Tom Maclay to build a destination ski resort on Lolo Peak.

Maclay was told Thursday that his newest Bitterroot Resort proposal did not meet the minimum requirements of an initial screening process for a special use permit application.

The reasons for the denial of Maclay’s newest proposal were essentially the same as the last time he asked.

In 2005, Maclay announced plans to turn his family’s ranch into the base area for a major ski resort. To make it happen, Maclay said he needed to obtain access to 11,000 acres of national forest lands in the basin above his home, near Lolo Peak.

That initial plan stalled at this exact same point in the process when Lolo National Forest officials said the proposal didn’t adhere to its long range management plans for the area.

Maclay officially offered a new proposal to the Forest Service in July, about five months after Metropolitan Life Insurance Co. Asset Holdings bid $22.5 million to buy back its loan on Maclay’s 3,000-acre ranch and his home.

Met Life had foreclosed on Maclay’s project in 2009.

In a letter presented to Maclay Thursday, forest supervisors from the Lolo and Bitterroot national forests said Maclay’s latest proposal called for development in areas set-aside for research or semi-primitive recreation.

On two of the three management areas, any change in land-use would require an amendment to the Forests’ long-range management plans.

It would take a Washington D.C.-level decision to abolish the Carlton Ridge Natural Research Area.

The letter told Maclay that research natural areas were established to last in perpetuity short of a natural catastrophe that changed the landscape enough to alter the conditions that were being studied.

Maclay’s proposal would come from the opposite side of the mountain and traverse through the established research natural area.

The letter said Maclay also proposed to build gondolas and ski trails in an area set aside under the Lolo Forest plan as a large, roadless block of land that allows no motorized access.

Lolo Forest Supervisor Debbie Austin said it would take a change in the forest’s land-use plan to accommodate that.

On the Bitterroot Forest, Maclay proposed similar developments in an area set aside to emphasize semi-primitive recreation.

“The current Forest Plan management area direction for the area in your proposal was developed through extensive public processes, and across each National Forest in its entirety,” wrote Bitterroot Forest supervisor Julie King. “We believe the resource values and objectives outlined in our Forest Plans are still appropriate for this area.“

King said management direction could be changed through a forest plan revision. On the Bitterroot Forest, King said the revision process is scheduled to restart in 2016.

Forest plans are essentially a contract the agency has with the public for management of national forest lands, Austin said. The plans are developed through an extensive public process, she said.

Maclay did not return a phone call Thursday.

In February, Maclay told the Missoulian his proposed Bitterroot Resort had been derailed by the Forest Service. He claimed to have spent millions to work through the agency’s permitting process.

LOLO – Tom Maclay is asking the U.S. Forest Service to again consider his proposal to build a destination ski resort on Lolo Peak.

Unlike the two times he’s asked before, this proposal doesn’t include the 3,000-acre family ranch that Maclay once planned to turn into the ski resort’s base area.

Just days before he’d have to go to court to protect the details of a new Bitterroot Resort ski area plan, Tom Maclay decided to release the p…

LOLO – Marketers have slashed the asking price for the historic Maclay family ranch near Lolo by $5 million.

CARLTON RIDGE – There is no tree in the lower 48 states quite like the alpine larch.

Tom Maclay’s second proposal for a luxury ski resort on U.S. Forest Service land above his family’s foreclosed-upon property near Lolo is fina…

Tom Maclay has submitted a new proposal to the U.S. Forest Service for a ski resort adjacent to his family ranch south of Lolo, but he’s not r…

A financial holding company bought back its own loan on Tom Maclay's proposed Bitterroot Resort ski area at a sheriff's auction on Wednesday.

FLORENCE - A week before his proposed Bitterroot Resort and family ranch are set for a sheriff's auction, Tom Maclay claimed in an interview the development was derailed by "bad faith" on the part of the U.S. Forest Service.

Maclay stopped short of saying whether he would or could use legal action to get the permits he needs to access 11,000 acres of national forest land around Lolo Peak. But he did pledge to keep working on the project during the 12 months he'd have to redeem the property after it's sold to recoup almost $23 million in debts.

Land once slated for Bitterroot Resort to be sold at auction

The land that Tom Maclay once imagined as large-scale ski resort is set for sale at auction less than two weeks from now.

A legal ad announcing the Feb. 22 sale on the steps of the Missoula County Courthouse recently appeared in newspapers.

Since a District Court judge ordered the historic 2,900-acre ranch at the base of Lolo Peak foreclosed last June, Maclay has tried to secure additional investors to finance his dream of developing the Bitterroot Resort.

One man's dream of developing a luxury ski resort on Lolo Peak seems to be fading into the ethers like a puff of windblown spindrift.

Tom Maclay explains years of difficulties trying to obtain permits for his proposed Bitterroot Resort at his home on Feb. 14, 2012.

Tom Maclay stands on his property in 2004 where he envisioned a ski resort in the Bitterroot Valley.