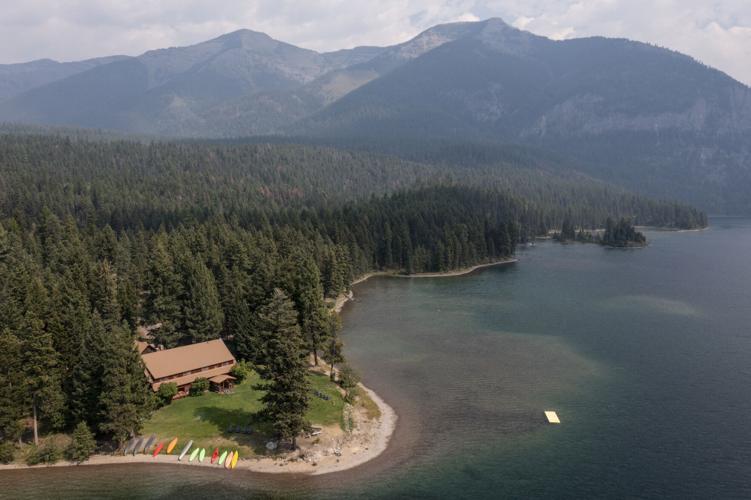 An aerial view of the Holland Lake Lodge on Wednesday afternoon is shown. The Flathead National Forest was to hold a public meeting on Thursday night about a proposal to remove 10 aging structures at the lodge and add a new 28-room lodge, restaurant and 26 new cabins near the lake. 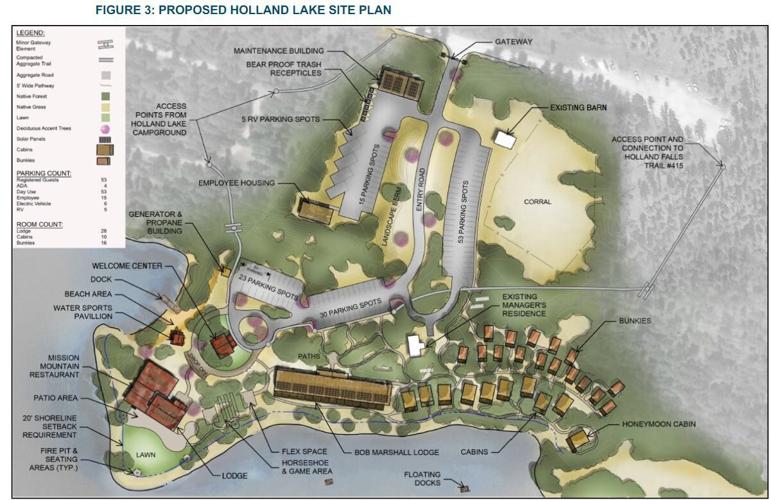 A site plan of the proposed expansion project at Holland Lake Lodge in the Swan Valley, just off Highway 83 an hour and a half drive northeast of Missoula, is pictured here.

But that is only if Forest Service officials move forward at all with the proposal as submitted. The Flathead National Forest may outright deny the proposal, which was submitted by Utah-based ski corporation POWDR. Or officials could take a middle route, asking POWDR to pare down or otherwise modify its proposal for the scenic lakeside lodge about a 90-minute drive north of Missoula in the Swan Valley.

A decision on how the national forest will proceed could be made by mid-December, according to Tami MacKenzie, public information officer for the Flathead National Forest. Amid reports that the forest could be nearing a decision on how to proceed with the controversial proposal — particularly, what level of legally required analysis the agency will subject the proposal to — MacKenzie said in a phone call that "where we stand now is we're still assessing the best way to move forward with the proposal as it was submitted." She said that could mean moving forward with analyzing the proposal, asking for modifications to the proposal before analysis begins, "or we deny altogether."

Listen to our Montana Untamed podcast:

"We're kind of in that position right now where we decide how to move forward," she said, adding that "this is a normal process, after scoping, for us to evaluate" how or whether to proceed.

The legal authority on how or whether to proceed ultimately falls to Forest Supervisor Kurt Steele, who MacKenzie said could choose a direction by mid-December: "That's our goal, is to have sort of a preliminary path forward before the holidays — possibly."

A joint venture between POWDR and Christian Wohlfeil, formerly the longtime sole owner of the lodge, has proposed 32 new buildings — including a 28-room lodge, a restaurant and 26 cabins — and the removal of 10 structures around the historic lakeside lodge in the Swan Valley. As proposed, the expansion would increase the size of the lodge's special-use permit from 10.53 acres to about 15 acres. The special-use permit allows the privately owned Holland Lake Lodge Inc. to operate as a private business on the public Flathead National Forest. Such arrangements are common, including widespread use for ski areas and similar guest lodges in Montana and across the West.

If Steele decides to move forward with analyzing the expansion proposal as submitted, the Flathead National Forest will perform an environmental assessment (EA) on the proposal, MacKenzie said. The move is a change from the agency's original posture upon bringing the proposal to the public in late summer.

Opponents of the proposal have petitioned the Forest Service to conduct an environmental impact statement (EIS), the most rigorous of three levels of analysis under NEPA. Groups like Save Holland Lake, which quickly formed late this summer in response to the first public comment period on the project, have requested that the forest conduct an EIS and ultimately deny the proposal.

Steele said at public meetings in the Swan Valley last month that he originally thought the 15-acre proposal was the same size as the lodge’s existing permit and wouldn’t be an expansion. He said that he later realized that the lodge’s current permit is for 10.53 acres, not 15. MacKenzie told the Daily Montanan two weeks ago that the forest was working to confirm that POWDR's proposal was, in fact, an expansion beyond the lodge's existing permit. If that was the case, she said, the agency would perform an EA, not a categorical exclusion.

On Monday, MacKenzie confirmed that "we would be doing an EA if the proposal for expansion moves forward."

If Steele were to instead ask POWDR to modify its proposal, she said, "it's a little bit preliminary" to say what modifications might be requested. And, she added, POWDR could choose to pull its proposal in response, rather than make requested modifications.

Steele could also choose to reject the proposed expansion altogether, as the project's opponents have requested. But, MacKenzie noted, even if the proposal is denied, "it doesn't mean that someone can't submit for a similar or same proposal. I don't know who would choose to do that ... but it's never really over."

Public outcry over the proposal has been intense. More than 6,000 public comments have been logged with the Forest Service. Almost all of them are opposed to the proposal, although Wohlfeil has maintained that the proposal has more support than is reflected in those comments.

And, MacKenzie said, the public comments play a factor in deciding how to proceed: "In all of my years of running public comment periods, this is probably one of the most organized community responses I've seen. They're intelligent and they're well prepared. We asked for substantive comments and they delivered. We have high-quality comments that we've considered ... and they're helping us frame how we want to move forward, for sure."

However, she said, the "biggest consideration" for the agency, as the federal manager of a national forest, is "what's in the best interest of the American public."

The Flathead National Forest's lands are held in public trust for all Americans, and land management decisions consider how to best manage lands for a nation of visitors, not just local communities and states. But, MacKenzie said, local impacts and how locals feel about a proposal are also important considerations. Sometimes the local interest and the national interest conflict.

"That's one of the things we're trying to figure out right now, is what is that balance?" she said. She offered as an example that if the lodge business were to fail without an expansion that would boost revenue (as Wohlfeil says is possible), "is that what's in the best interest of the public? It's trying to walk through some of those different scenarios and find that balance."

Get social with Montana Untamed:

Separate from the proposed expansion, the Forest Service is examining whether the joint venture, in which two POWDR executives own a minority stake in Wohlfeil's Holland Lake Lodge Inc., has violated the terms of the lodge company's current special use permit. Holland Lake Lodge Inc.'s permit states that a change in ownership or control of the business, including a joint venture, shall result in termination of the permit. The lodge company's primary business address was changed to POWDR's corporate headquarters in Park City, and a POWDR executive now owns the lodge's liquor license. Wohlfeil has stated that POWDR's VP of Communications Stacey Hutchinson represents and speaks for Holland Lake Lodge.

On yet a different front, at some point "in the mid 2010s," MacKenzie said, a fence was erected around the lodge business. But even through the lodge's current permit is for 10.53 acres, recent mapping showed that the fence encloses 13.4 acres — or 2.87 acres of public lands that aren't part of the lodge's permit.

MacKenzie wasn't sure on Monday who put the fence up. It may have been a joint project between the forest and Wohlfeil, then the sole owner of the lodge. Or it may have been Wohlfeil alone, she said.

Regardless, she said, if the agency decides to move forward with analyzing the expansion proposal as submitted, the 2.87 acres of public lands within the lodge's fence would be analyzed as part of the expansion because the land, despite being fenced in with the lodge, is not currently part of the lodge's permitted acreage.

If the agency doesn't move forward with analyzing the proposed expansion, that leaves the 2.87 acres in limbo, and "we're still trying to figure out what kind of process we would need to use" to address it. The forest could request that the fence be removed, she said.

Video: Holland Lake from above

An aerial view of Holland Lake in Montana.

The joint venture between POWDR and owner Christian Wohlfeil has proposed 32 new buildings and the removal of 10 structures around the historic lakeside lodge in the Swan Valley.

“If you want to go forward with a project that might destroy the environment, (the National Environmental Policy Act) won’t stop you,” said a UM law professor.

"Because it happens everywhere else doesn't mean it has to happen here. We could actually be the role model and say ... keep your big corporations and big money outta here."

A new two-story lodge would be built, along with a new 3,000-square-foot Mission View Restaurant. A large ski resort company is a partner on the project.

The Flathead National Forest has rejected a controversial proposal from a Utah-based ski corporation to significantly expand Holland Lake Lodge.

RAW: WORLD CUP: AMERICAN FANS IN QATAR REACT TO THE NETHERLANDS VICTORY OVER US

RAW: WORLD CUP: AMERICAN FANS IN QATAR REACT TO THE NETHERLANDS VICTORY OVER US

Behind the Scenes - At the World Cup media hub

Behind the Scenes - At the World Cup media hub

An aerial view of the Holland Lake Lodge on Wednesday afternoon is shown. The Flathead National Forest was to hold a public meeting on Thursday night about a proposal to remove 10 aging structures at the lodge and add a new 28-room lodge, restaurant and 26 new cabins near the lake.

A site plan of the proposed expansion project at Holland Lake Lodge in the Swan Valley, just off Highway 83 an hour and a half drive northeast of Missoula, is pictured here.