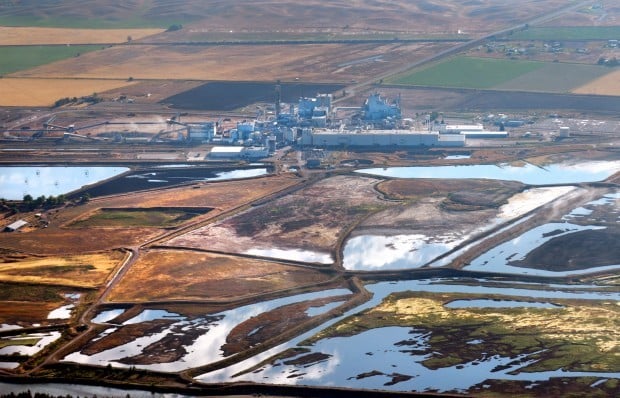 This August 2010 aerial photograph of the Smurfit-Stone Container Corp. mill in Frenchtown shows the extensive network of settling ponds that some fear may hold contaminants that must be cleaned up. Photo by MICHAEL GALLACHER/Missoulian 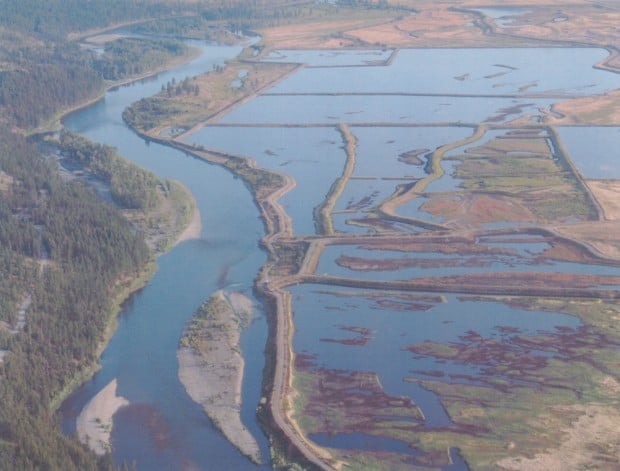 The analytical results report could lead to the millsite becoming a federal Superfund project. It also raised concerns about risks to the Clark Fork River if a levee protecting a network of sludge and wastewater ponds should fail.

“It looks like there’s enough stuff to trigger it qualifying to be on a Superfund list,” Missoula County Commissioner Jean Curtiss said on Wednesday. “That matters a lot just because the financial and staff recourses needed to oversee this site would be substantial. So federal and state oversight would be good.”

The 183-page report does not make recommendations about Superfund listing or how to clean the area. It does list the hazardous substances found, their locations and concentration. It also confirms suspicions that some materials were traveling off-site.

“There are red lights coming up for dioxins and furans, particularly for soils in the sludge ponds,” said Chris Brick, science director for the Clark Fork Coalition, a nonprofit river monitor that has paid close attention to the old paper mill’s impact on the surrounding water system. “It appears the levels weren’t high enough to qualify for an emergency response action from the EPA. But we can show contaminants have migrated to shallow groundwater and stream sediments.”

“Even if not every inch was covered on the property, there already appears to be sufficient contamination from a cursory examination to warrant a Superfund listing,” Opper said. “It looks like the more you dig, the more you’ll find.”

Opper said two unknowns remain to be figured out. One is whether the project warrants federal oversight or should be handled through the state’s version of Superfund cleanup. That will depend on more specific analysis of the contamination and how it’s spreading. There are currently more than 200 state Superfund sites, but less than 20 federal ones in Montana.

The other is whether someone with ownership of the millsite is liable to pay for the job.

The first pulp mill started operating south of Frenchtown in 1957. By the time it closed in 2010, it had expanded to a 100-acre industrial complex bordering 900 acres of settling, sludge and wastewater ponds in the Clark Fork’s floodplain. At its peak in 1993, the mill processed about 1,900 tons of pulp a day into linerboard for cardboard boxes.

Final owner Smurfit-Stone went bankrupt in 2009. The company recovered in 2010, but closed the Frenchtown mill as part of a nationwide restructuring. MLR Investments bought the mill, and then sold it to Green Investment Group Inc. in May 2011.

“We have received and are in careful review of the Analytical Results Report from the Environmental Protection Agency,” GIGI vice president Mark Spizzo said in an email statement. “We have been working cooperatively with the EPA throughout their inspection and will work in tandem with them to gain full understanding of the situation and to determine any further actions. As always, the health and safety of the citizens of Missoula County is our No. 1 priority.”

GIGI has an insurance policy to cover environmental liabilities, although Clark Fork Coalition director Karen Knudsen said that may not be adequate to handle the size of the potential cleanup. Georgia-based RockTenn Co. bought most of Smurfit-Stone’s assets in the bankruptcy proceedings, but it may not be on the hook for the Frenchtown mill’s contamination.

“Dioxins, in particular, are really potent carcinogenic substances that can damage human immune systems and interfere with hormonal and reproductive function,” Brick said. “They accumulate in fish and then work their way up the food chain. They’re bad news all the way around, and there’s evidence that they’ve spread beyond the site to shallow groundwater and the river. Much of this area is within the 100-year floodplain, so the potential for further damage to the river is a real possibility.”

Curtiss added that the earthen levee separating the ponds from the river hasn’t been maintained since the pulp mill closed, and does not meet Army Corps of Engineers certification.

“If we have another high-water event, those could start eroding away,” Curtiss said. “Then everything could be washed down the river.”

The EPA study did not test for contamination in fish or wildlife, although it does note the 15-mile reach affected by the mill’s water discharge activities was considered “outstanding” by Montana Fish, Wildlife and Parks. It also reported the area is a historical peregrine, falcon and bald eagle nesting area.

The researchers also considered possible confusion with toxic substances released from the Superfund cleanup of Milltown’s old dam and reservoir, which held back a century’s worth of mining waste. In particular, they reported that concentrations of manganese, dioxins and furans appeared to come from the mill site.

“Some people think getting a Superfund listing can give you a big black eye,” Curtiss said. “But we can look at Milltown to see a Superfund project can be good for the economy and environment, so we aren’t as worried about that. It also gives more leverage to get the polluter to pay for the cleanup.”

This August 2010 aerial photograph of the Smurfit-Stone Container Corp. mill in Frenchtown shows the extensive network of settling ponds that some fear may hold contaminants that must be cleaned up. Photo by MICHAEL GALLACHER/Missoulian