A screen shot from Will Deschamps Sr. Facebook page on Tuesday. 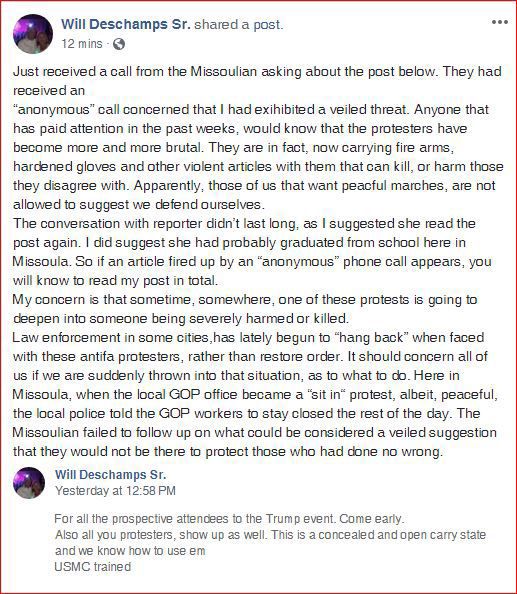 On Wednesday, after being contacted by a Missoulian reporter, Will Deschamps Sr. added this post to his Facebook site.

A Facebook post by a former state Republican chairman appears to be urging people to bring guns Thursday to Missoula’s Trump rally. But Will Deschamps Sr. says he’s only suggesting that people be ready to defend themselves against armed “antifa” who may be present.

In a short telephone interview, Deschamps, who led the Montana GOP from 2009 to 2015, said his post wasn’t any kind of veiled threat, but he is concerned about the far-left antifa, also known as anti-fascists.

Last weekend, melees broke out in New York and Portland between members of the antifa and the far-right Proud Boys nationalist men’s club. Both groups condone political violence.

According to the Washington Post, cell phone videos in New York showed a person “writhing on the sidewalk while several men take turns kicking him” during a confrontation between the two groups. It noted that officers spotted pepper spray, hard-knuckled gloves, firearms, batons, and knives at the Portland fight between the two groups, but didn’t specify which group had which weapons.

“My concern is with the antifa,” Deschamps said moments before hanging up on a reporter. “Someone is going to get hurt at those protests.”

In his first Facebook post, Deschamps wrote: “For all the prospective attendees to the Trump event. Come early. Also all you protesters, show up as well. This is a concealed and open carry state and we know how to use em. USMC trained.”

He elaborated in a second, longer Facebook Post, writing that “… protesters have become more and more brutal. They are in fact, now carrying fire arms, hardened gloves and other violent articles with them that can kill, or harm those they disagree with. Apparently, those of us that want peacful (sic) marches, are not allowed to suggest we defend ourselves.”

Deschamps adds that in some cities, law enforcement officials have begun to “hang back” when facing the antifascist protesters, “rather than restore order.”

“It should concern all of us if we are suddenly thrown into that situation, as to what to do,” Deschamps wrote.

He noted that when the Missoula GOP office became home to a peaceful “sit in“ protest, “the local police told the GOP workers to stay closed the rest of the day. The Missoulian failed to follow up on what could be considered a veiled suggestion that they would not be there to protect those who had done no wrong.”

Erin Erickson, director of Missoula Rises, which is organizing the Love Trumps Hate “get out the vote” counter protest to the Trump rally, called Deschamps postings “irresponsible” and concerning.

“I think what he is doing is playing directly into the narrative that President Trump is creating, that the left is an angry mob,” Erickson said. “There is no evidence of that in Missoula. I think he’s trying to further that narrative without any evidence.”

She said they plan to meet Trump’s “divisive and hateful rhetoric” with an outpouring of community, love, support, grace, collaboration and action.

“On Thursday, we intend to radiate love and action throughout our state,” Erickson said in a press release.

She’s been involved in numerous protest marches throughout Montana, including the Women’s March in Helena that drew 10,000 people, and said she’s never experienced any violence. Still, Erickson is working with both the police and sheriff’s departments in Missoula to try to provide safe and constructive events.

Brenda Bassett with the sheriff’s office said both departments are beefing up patrols within city limits and at the airport venue in order to keep the peace. Bassett said they’re aware of Deschamps’ posts, and have “forwarded it to the appropriate parties.” Local law enforcement are working closely with the Secret Service, which focuses on protecting the president.

“We are hopeful that Missoula County citizens and others will be respectful,” Bassett said. “We’re taking precautionary measures and beefing up patrols.”

But she said the only concerns they had heard about the potential for violence were in Deschamps' post.

She couldn’t say whether security measures would keep people from carrying concealed weapons into the Trump rally. It is slated to begin at 6:30 p.m. at Minuteman Aviation near the airport.

Some protesters are expected to attend that event.

Mary Ann Gillispie plans to be at the airport at 8 a.m. sharp Thursday — a latte in hand — to be sure she gets to see President Donald Trump.

Up to 8,000 expected for Trump rally in Missoula; parking, shuttle service set for airport

Between 6,000 and 8,000 people are anticipated to attend the Missoula campaign rally with President Donald Trump on Thursday evening.

POLSON — Drive up U.S. 93 north of Missoula, and it’s hard to parse a political slant. Both Republican and Democratic candidates can claim ple…

Missoula Democratic leaders not invited to, not attending Trump rally in their backyard

For Missoula teachers, navigating current events in polarized times is perilous but important

With Mount Jumbo’s “L” transformed into the word “LIAR” and scores of people taking to the streets across Missoula, protesters peacefully unle…

In advance of President Donald Trump's rally in Missoula Thursday evening, U.S. Sen. Jon Tester has taken out a digital campaign blitz on the …

Brandon and Trevor King came too late to see Trump’s rallies in Great Falls or Billings earlier this summer. So they contacted the Missoula Re…

President Donald Trump is making a trip to Missoula on Thursday evening. Here are the scenes from the event.

The decrease in students at the University of Montana hasn't just hurt the general fund and UM's ability to pay faculty.

Two Missoulians and a Trout Creek resident are running for Montana’s Public Service Commission in District 4.

A screen shot from Will Deschamps Sr. Facebook page on Tuesday.

On Wednesday, after being contacted by a Missoulian reporter, Will Deschamps Sr. added this post to his Facebook site. 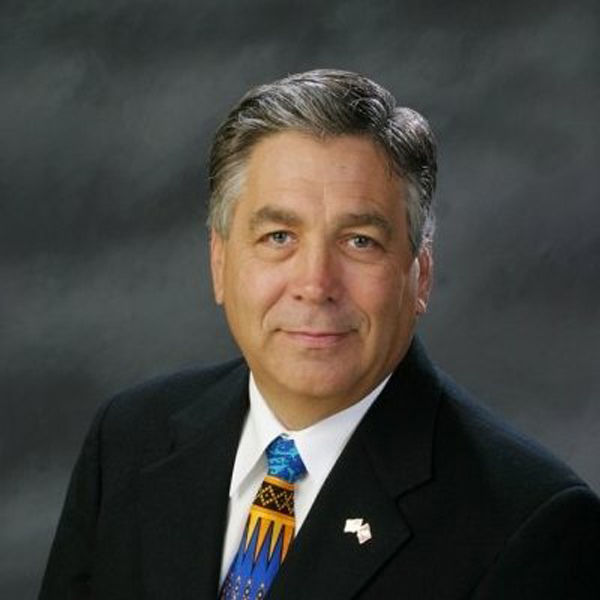