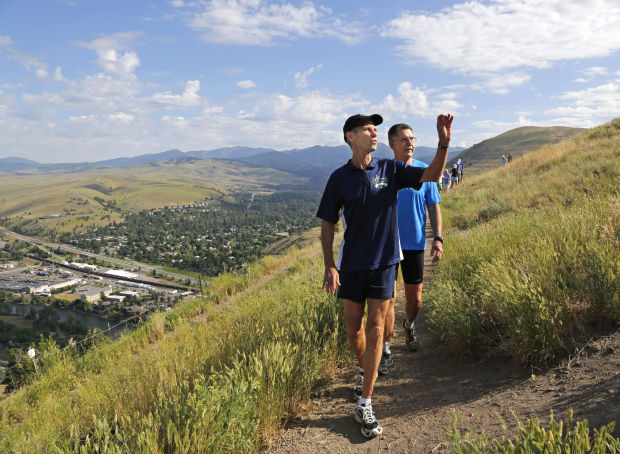 Former Olympian Jeff Galloway leads a group of runners on a hike up to the “M” on Mount Sentinel on Friday. Galloway says that his last trip to the “M,” in 1971, was a run, but he is excited to make the hike an annual event preceding the Missoula Marathon. 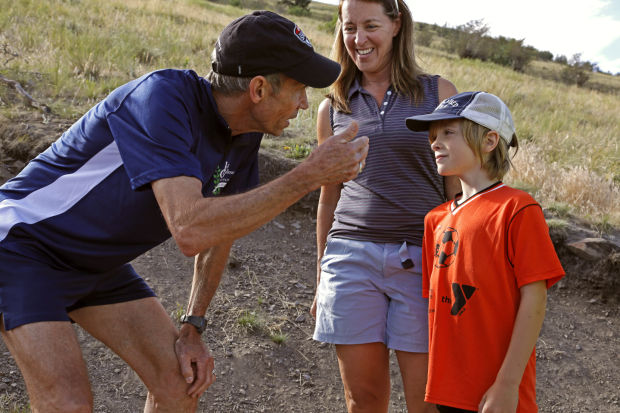 Galloway pauses to talk with Bonnie Spence and her son Nathan Ritchlin during the hike to the “M” on Friday. Both Spence and Ritchlin will be competing in marathon events, Ritchlin in the kids marathon Saturday and Spence in the half Sunday. 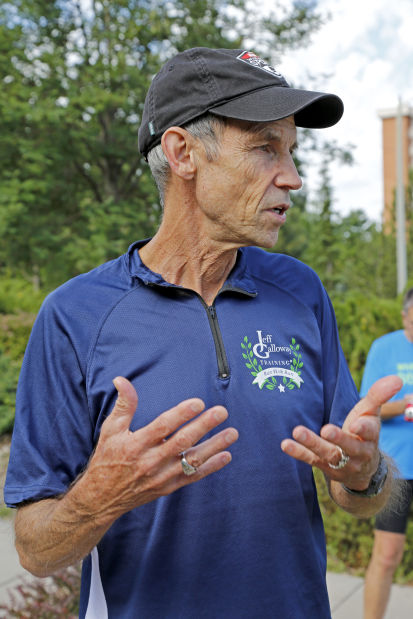 Jeff Galloway ran to the top of the “M” trail in 1971 when he came to Missoula to take part in a U.S. Olympic Committee training camp. The rigorous 3 1/2-week training camp had him running on trails across Missoula. It was intense training that Galloway says helped him earn a spot on the 1972 U.S. Olympic team.

Ever since, Galloway told a crowd gathered at the bottom of Mount Sentinel on Friday, he’s wanted to take on the trail again.

Galloway was back on top of the “M” Friday – which was also his 68th birthday – for the first time more than 40 years. This time, he walked to the top and was joined by a host of runners who have adopted his run-walk-run method for long-distance races.

Galloway has become a staple figure at the Missoula Marathon in recent years. He and his wife, Barbara, will run the marathon using the run-walk-run method again Sunday. Galloway also is putting on a running school Saturday and making various appearances around town.

More than 150 people took part in the Galloway training program for the Missoula full and half marathon this year.

For Glen Burwick of Stevensville, the Galloway method has become part of a year-round training regimen that brought him back to health.

Three years ago, Burwick said as he motored up switchbacks Friday, extreme back pain sent him to rehab.

“I had an MRI and the doctors told me my back was so bad I couldn’t have surgery,” he said.

Burwick continued rehab until his wife, Sue, decided she’d use the Galloway method to train for the marathon later that year. Burwick went along for the first class.

“We were running one block, walking one block. That first day I thought I would die,” he said.

Getting time with Galloway is inspiring, Burwick said.

“He gets here and you just get energized,” Burwick said.

This year, Spence will run the half marathon by alternating running for three minutes and walking for one minute.

“I’m totally sold (on the Galloway method),” she said sitting on the edge of the “M.” “It’s incredible to be injury-free. I really think as you get older, the pounding gets hard. The balance (of Galloway’s method) is great.”

This is the third year the Galloways have been a part of the Missoula Marathon weekend.

Galloway said Friday that Missoula’s unique offerings, like the ability to hike the “M,” make it a great place to hold a marathon.

“(Runners) want to find unique things to do,” he said. “You can’t do this anywhere else. ... I want to make this a tradition.”

Galloway is certain the Missoula Marathon will continue to grow.

And he’s already convinced at least one runner to give the 26.2-mile course a try.

Peter Pressman came from Franklin, Tenn., to run the Missoula Marathon for the first time this year. Pressman, who hiked the “M” on Friday, credits Galloway’s method and coaching with bringing him back to running after he shattered his femur and had a steel rod inserted in his leg.

“Jeff helped coach me very patiently. He wrote me schedules and nurtured me,” Pressman said. “Jeff has spoken volumes about Missoula. We’re just enjoying being in Missoula.”

We want your race day pictures. If you’re sending shots of the 2013 Missoula Marathon to social media sites, use the hashtag #mm2013 so our reporters can create a couple of photo features. If you geotag your photo, all the better. Happy running, walking, cheering, Twitpic-ing and Instagramming.

It isn’t every day 4,000 people participate in the same race.

However, that very unlikelihood will become reality Sunday at 6 a.m., when the seventh annual Missoula Marathon commences.

The Missoula Marathon and Half Marathon are just around the corner, and Run Wild Missoula wants to persuade local runners to register before f…

Run Wild Missoula is increasing security an estimated 20 percent for the 2013 Missoula Marathon, but at least in one respect, it’s doing so in…

When the starting gun sends off runners in the seventh annual Missoula Marathon on Sunday, they’ll be headed into a pleasant day weatherwise.

6,000-plus to run in Missoula Marathon events

Here’s a numerical look at the number of Missoula Marathon runners, the course and help along the way:

Shawn Lewis is traveling from Washington state to run the marathon in Missoula, and he’s bringing a whole troop along with him.

As of Thursday, the 2013 Missoula Marathon has helped to raise over $78,000 so far this year for Missoula area charities through Crowdrise, an…

Dudley Dana loves painting – he owns a gallery, after all. And he loves running so much he was on the original committee to start the Missoula…

Former Olympian Jeff Galloway leads a group of runners on a hike up to the “M” on Mount Sentinel on Friday. Galloway says that his last trip to the “M,” in 1971, was a run, but he is excited to make the hike an annual event preceding the Missoula Marathon.

Galloway pauses to talk with Bonnie Spence and her son Nathan Ritchlin during the hike to the “M” on Friday. Both Spence and Ritchlin will be competing in marathon events, Ritchlin in the kids marathon Saturday and Spence in the half Sunday.