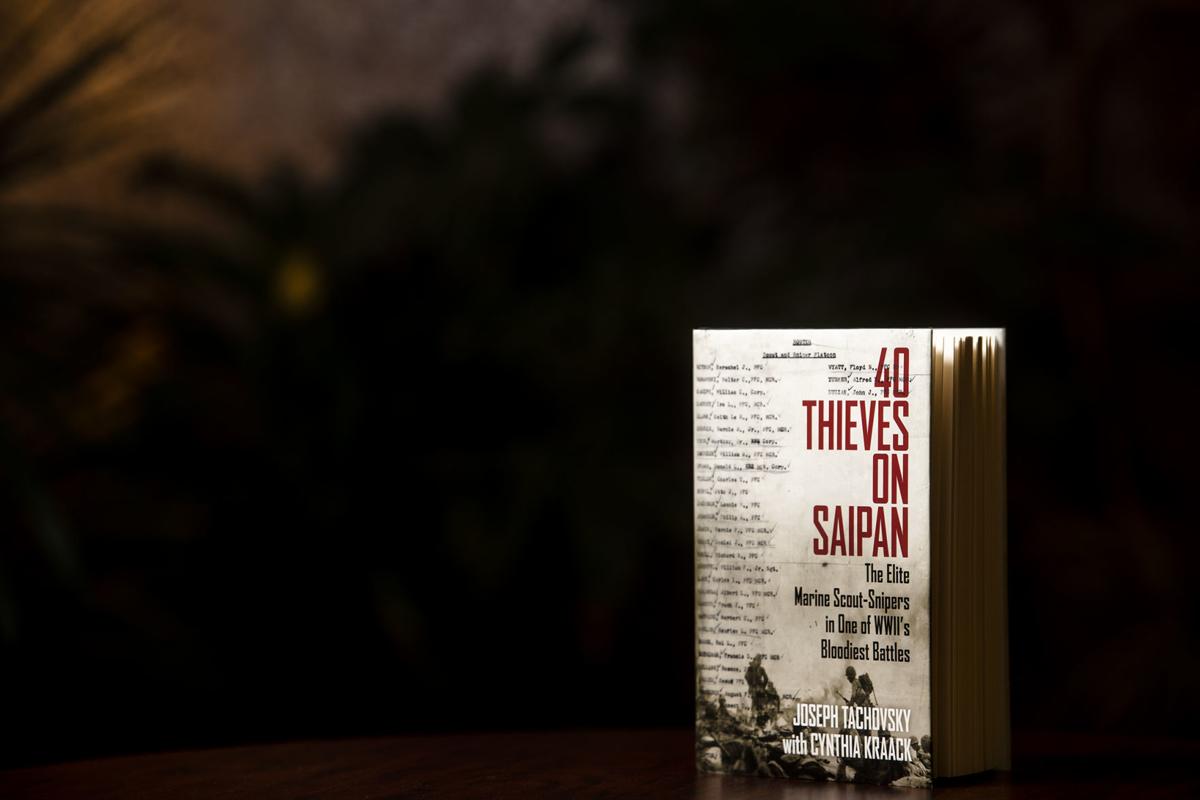 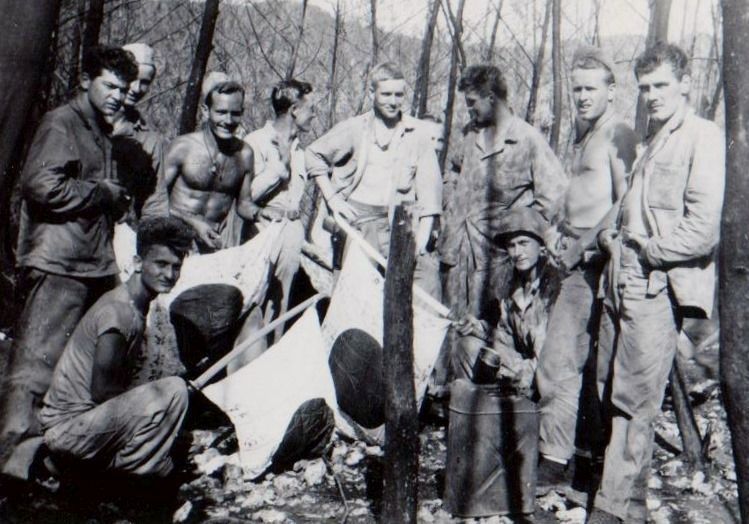 Marvin Strombo (lower left) and others in his platoon of Marine Scout-Snipers before a banzai attack on Saipan in 1944.

The passing last week of Marvin Strombo was a poignant afterword to Joseph Tachovsky’s new book.

Strombo, who died June 23 at his home in Missoula at age 96, was one of the last two survivors of a Marine scout-sniper platoon during World War II that Lt. Frank Tachovsky, Joe’s father, commanded.

“Forty Thieves on Saipan: The Elite Marine Scout-Snipers in One of WWII's Bloodiest Battles” was released three weeks earlier. It's the cumulative result of a eulogy at Frank’s funeral in 2011 and an immense amount of research and travel since then. The eulogy, by a classmate of Frank's at the University of Wisconsin in the 1950s, told the story of how the elder Tachovsky had saved his unit by stepping in front of an attacking Japanese tank on Saipan and disabling it with a bazooka.

It was the first time Tachovsky had heard of such heroics and it whetted his appetite to learn more. A couple of months later the first-time author made an initial trip to Big Arm on Flathead Lake to visit Bill Knuppel, the Thieves’ second-in-command who remained Frank Tachovsky’s good friend after the war. Knuppel was a “walking, talking Marine Corps historian” who filled Joe in on all the things his father never mentioned and provided his own diary, photos, a DVD interview and a memoir he’d written titled "Semper Fi."

Tachovsky, a restaurant consultant from Sturgeon Bay, Wisconsin, began writing letters to survivors of his father’s platoon on Saipan. He got replies from family members and from three “Thieves” themselves — Bob Smotts in Georgia, Roscoe Mullins in West Virginia and Strombo, Mullins’ closest buddy from boot camp throughout the war.

Tachovsky hit the road. He found all three men were willing to discuss their service and to supply pictures and other memorabilia. It didn’t hurt, he said, that he was the son of their beloved “Ski.” All became his friends.

“I visited these people not even looking for stories any more, just to visit with them,” Tachovsky said last week. “They’re wonderful people.”

Through interviews, letters and reports, Tachovsky assembled accounts of the 40 Thieves’ exploits. He detailed how they were chosen by Frank Tachovsky “for their willingness to defy rules and beat all comers.”

The first half of the book spans a timeframe of mid-January to mid-June 1944 and describes the training on the Big Island of Hawaii for a secret mission, and the blending of strong and diverse characters to form a bond the likes of which they’d never experience again, and most of us never will.

On June 15, 1944, nine days after the Allies’ D-Day invasion of Normandy in the European theater, Army troops and Marines stormed beaches at the southwest end of Saipan. Lt. Tachovsky’s small scout-sniper platoon was among the first to land. The Thieves would spend more time than not during the next 25 days behind Japanese enemy lines, pushing northward.

At first Tachovsky submitted an oral history of the Forty Thieves, but a publisher told him oral histories don’t sell.

“The story was in effect an amassing of all this information into a big box of jigsaw pieces of memories and figuring out how to put them together,” he said. “It was always about going to see Marvin and Roscoe and those guys. They were what made the story enduring.”

But the approach was unwieldy.

"I loved the words of these men so much, every story had kind of too much stuff going on," he said.

He enlisted Cynthia Kraack of Minneapolis, a novelist, historian, former journalist and a longtime acquaintance, to help hone it into something more marketable while avoiding trivializing the men involved.

The result is a gritty, graphic story that doesn’t shy from profanity and carnage. Tachovsky said he listened to 1940s radio shows to capture the rhythms and vernacular of the era.

It was Mullins who told Tachovsky of the most horrifying scene. The battle ended with Japanese soldiers and hundreds of civilians pushed to the northernmost point on Saipan, atop the sheer cliffs of Marpi Point.

Through pamphlets from the air and interpreters over loudspeakers, the Allies urged the surrounded not to be afraid and plied them with offers of food and water. Mullins was among the Thieves who helped escort the traumatized non-combatants who accepted the aid.

“As callous as Mullins had grown, something about the scene made him uneasy,” Tachovsky wrote. “Mothers flinched at every sound and looked for avenues to move out of the crowd. Children clinging to skirts were separated and swept away.”

When he tried to help a young woman and her baby, Japanese soldiers kept him away, waving their weapons and yelling.

“Movement along the cliff became panicked," Tachovsky wrote. "A strange throbbing chant began and grew louder, louder, louder. Their emotions driven out of control, mothers hurled their babies and small children from the cliff and then quickly followed, crashing body after body onto the jagged rocks below.”

Tachovsky said it was a scene Mullins couldn’t shake from memory all these years later.

“Roscoe would break into tears every time he’d try to talk about it,” the author said. “He didn’t when (Martin) Dyer died or (Daniel) Kenny or the others, but he cried about that. They all did."

Five of the 40 Thieves died on Saipan, a remarkably low total considering what they went through. Most of the survivors of that and many other battles of World War II returned home broken to some extent. Tachovsky talks about a few of the worst cases in the closing chapter, those who battled alcoholism, became estranged from their families or lived aimlessly.

"Gone was the regimentation that had governed their lives for the past four years. … The skills that kept a Thief alive in the war didn't translate into peacetime success," Tachovsky wrote.

A proofreader noted "Forty Thieves" is a book about war but "it’s certainly not a pro-war book,” Tachovsky said last week. "That's true. And it's no different for any man or woman who serves in combat today.”

Mullins told him he prays “every day for the people I’ve killed.”

“The reason I had trouble talking about what happened was that I feared I was beyond forgiveness for the things I had done,” Smotts said.

“The toughest thing Ski faced would be sending people out on missions knowing that they were going to get shot up,” Strombo told Tachovsky. “That was something he had to live with. He had to make that decision of which ones go out and either live or die.”

The Thieves who never made it off Saipan were just kids who “never had a chance at life,” Knuppel said. “And so many Japanese boys were just like us.”

“For every Mother Theresa, there are many more Stalins and Hitlers,” Frank Tachovsky said. “We are an odd species in that we can create Sistine Chapels and centers of great learning yet consistently find ways for extreme cruelty to one another.

“You hope that someday the world will grow tired of war.”

To get a copy

“40 Thieves on Saipan: The Elite Marine Scout-Snipers in One of WWII’s Bloodiest Battles” by Joseph Tachovsky with Cynthia Kraack (Regnery Publishing, $29.99 hardback) is available in Missoula at Fact & Fiction, Shakespeare & Co. and Barnes and Noble, as well as online at amazon.com and barnesandnoble.com.

Included in the new cases in Missoula are five Missoula Fire Department firefighters who tested positive for COVID-19, the City announced in a press release Tuesday.

Missoula's Union Block, which later came to be known as the Radio Central Building, was saved from destruction several times — by chance, or maybe by fate.

No room for germs or more 'stuff' at the museum

The Historical Museum at Fort Missoula is putting a temporary halt to donations for its permanent collection, which has grown by nearly 7,000 artifacts in the past 3 1/2 years.

Video: Pangea restaurant and bar to open in Missoula

Video: Pangea restaurant and bar to open in Missoula

Marvin Strombo (lower left) and others in his platoon of Marine Scout-Snipers before a banzai attack on Saipan in 1944.