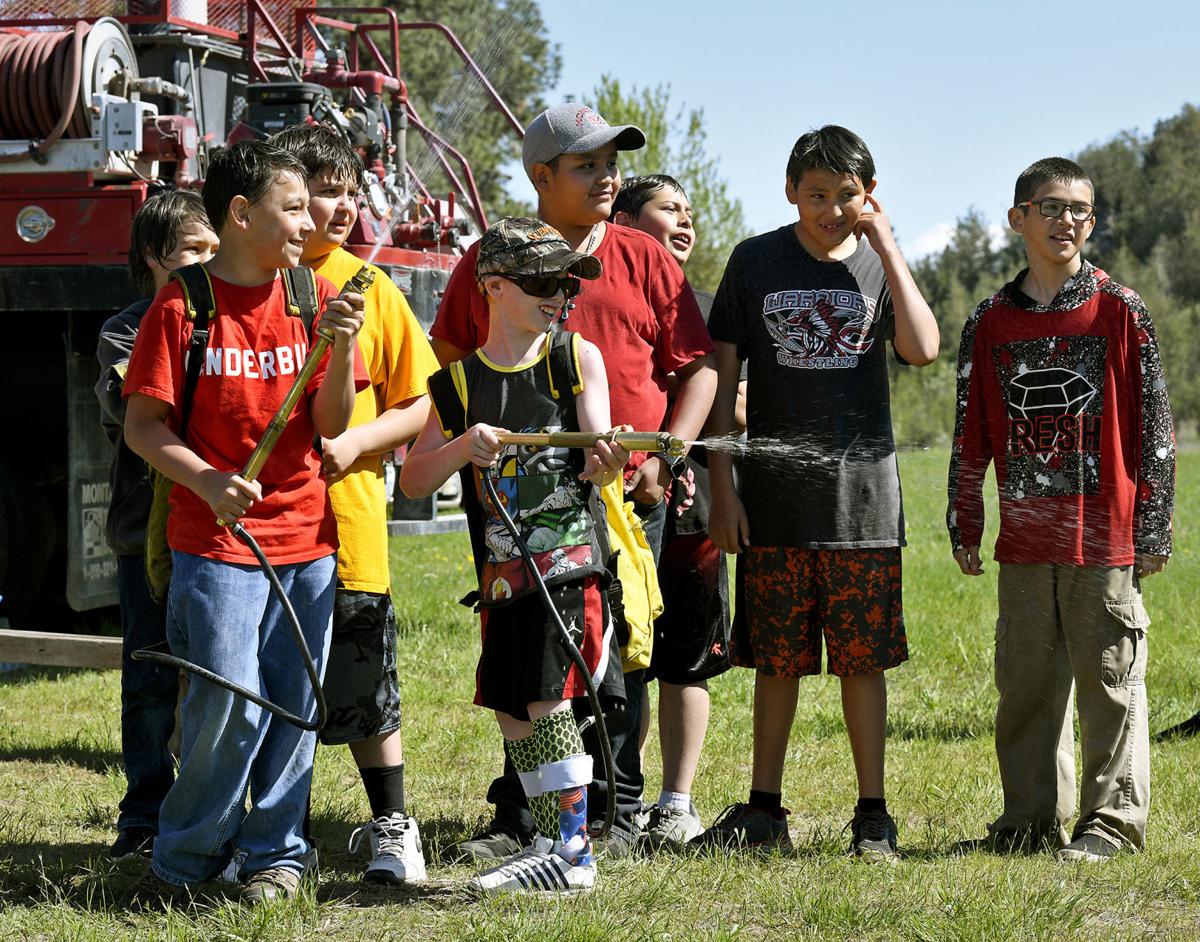 Ethan Vanderburg, left, and Dallas Ellison, fifth-graders from Arlee Elementary, try out backpack firefighting pumps from the Confederated Salish and Kootenai Tribes Division of Fire at the 32nd annual River Honoring on Tuesday on the Lower Flathead River. The event brings fourth- and fifth-grade classes from the area to teach students about natural and cultural resources of the river. 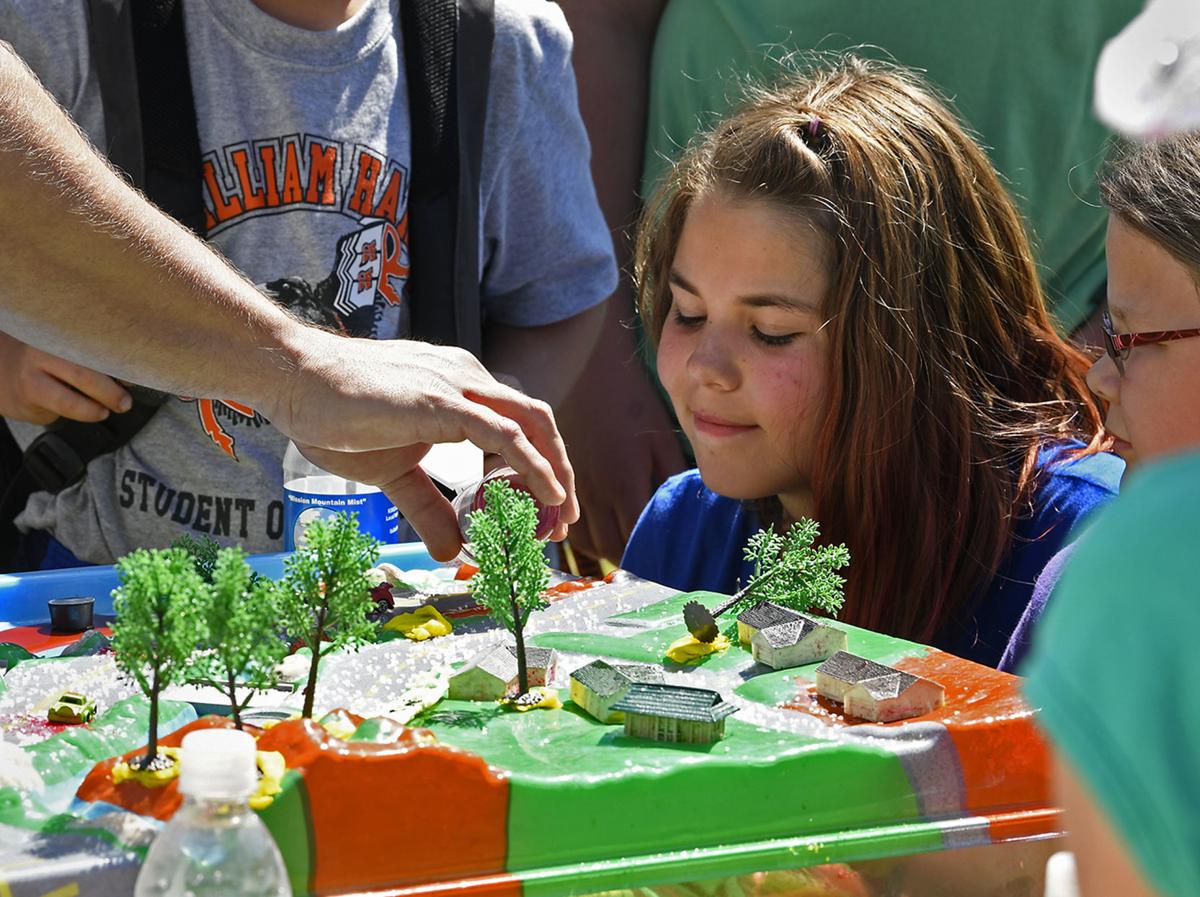 Novalii Corum, a fourth-grader from Ronan, watches a demonstration of how pollutants can enter wetlands and waterways at a River Honoring educational station on Tuesday. 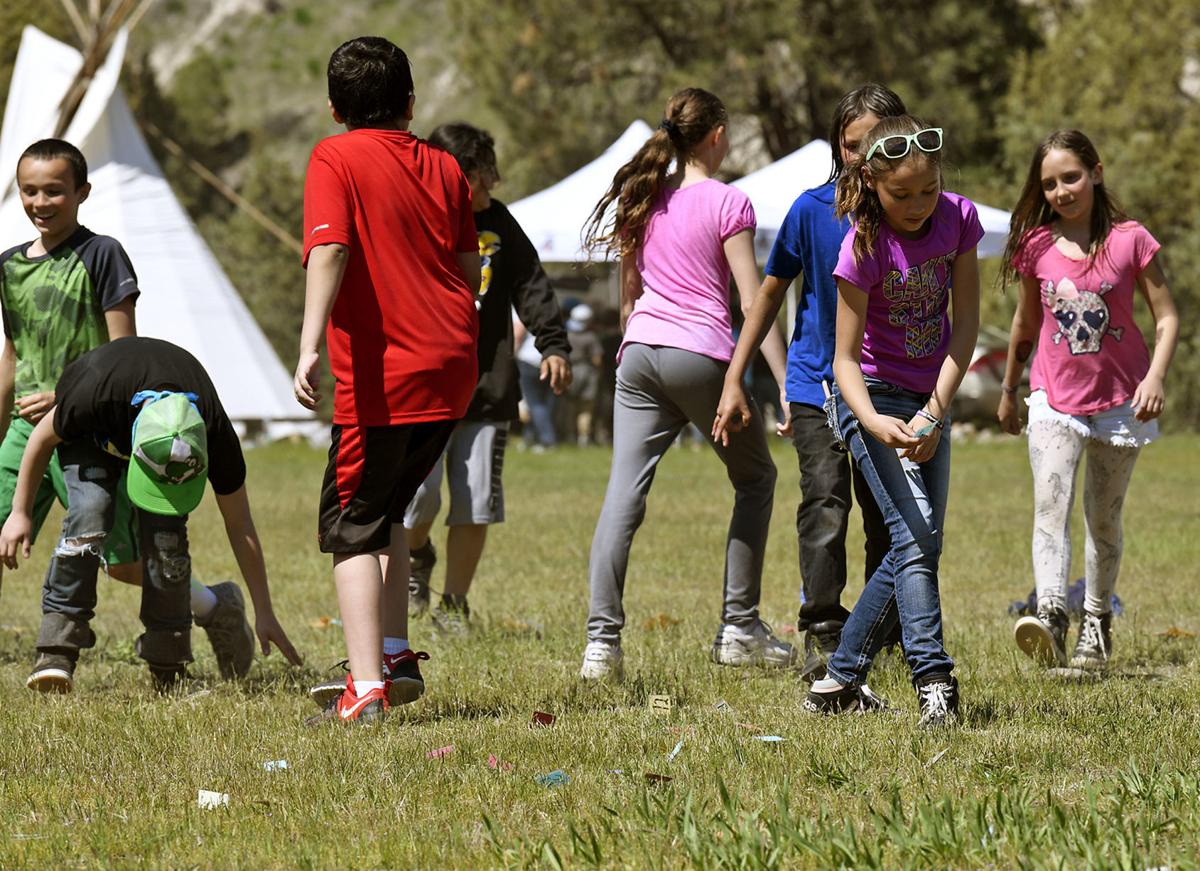 Polson fifth-graders gather up markers representing foods that bears eat at a CSKT Fish and Game station at the River Honoring on Tuesday. Tribal and state wardens talked to students about resources bears need to survive, and why careless practices by humans can lead to conflicts with bears.

KOLBY KICKINGWOMAN For the Missoulian

ALONG THE LOWER FLATHEAD RIVER — Around a bend on Moiese Valley Road, 22 tepees were set up Tuesday along the Flathead River. Had there been no cars or yellow school buses, one may have thought it was a traditional Native American camp.

It was a pristine day for a field trip. Few clouds dotted the sky as the sun beamed off the blueish-green water of the Flathead River.

More than 500 fourth- and fifth-grade students from Arlee, Ronan and Polson traveled to the traditional Pend d'Oreille, Salish and Kootenai campsite along the river Tuesday to participate in various hands-on educational stations for the 32nd annual River Honoring. Another 500 students are expected Wednesday.

The two-day educational event, following the main ceremony Monday evening, allows the students to create a memory that will last a lifetime, said Germaine White, the Confederated Salish and Kootenai Natural Resource Department Information and Education Program manager. Experiential education is more powerful than going into a classroom and just talking about the river, she said.

"You don't love something you don't know," White said. "So we want them to have this experience, to know the river, to spend time here, to listen to people talk about how much they love the river."

The 22 stations were split into two loops, Blue and Red, ranging in topics from the effects of invasive species to ancestral skills and technology to traditional games, like double ball.

Ten-year-old Denia Kuntz was eating some SunChips during the lunch break and said she was learning all sorts of stuff about the different tribes' cultures and the river. Along with her fourth-grade classmates from Ronan, she had just come from a station learning about pesticides and pollinators; her favorite thus far.

"They tricked us," Kuntz said. "They put the bags and there was little flowers on them and then there was little Cheetos in them and we put them (the Cheetos) to another flower" — the orange dust from the Cheetos mimicking pollen. "So after we did the game, we understand that we just pollinated."

Kuntz's teacher, Julie Janssen, said the day was going well, and attending the River Honoring was a great opportunity for her students to learn about the land they live on.

"There's nothing better than hands-on learning," Janssen said. "I think that for them, living on a reservation, it makes them understand the importance of natural resources. (The importance) of protecting the river, you can't teach these things in a classroom, there's no way."

After lunch, just down the way from the pesticides and pollinators tepee, Tim Ryan was speaking to a group of fifth-graders from Polson. He pointed at an "indigenous seasonal round" calendar, displaying the different activities tribes would partake in a given month or season.

"What season are we in now?' Ryan asked the group.

"Let's look at May, bitterroot month, OK, what does that mean?" Ryan asked.  "That means probably that month we're going to harvest bitterroot."

Ryan pointed to a serviceberry bush behind the kids and said that was also an indicator to tribes that the cutthroat trout would be traveling up the river soon to spawn. He then showed the kids a traditional fish trap made from willow branches and demonstrated how it worked.

Perhaps the most laid-back station wasn't a station at all. Elders Steven Small Salmon, Tony Incashola and Bud Moran were the timekeepers, singing a short song every 25 minutes to let the students know it was time to move to the next station.

The area where the River Honoring was being held was especially significant for the three men, as they used to travel there as kids themselves to hunt, fish and gather supplies for the winter months. Incashola said it's important to know the history of where you live.

"The world we live in today is fast-paced and I think a lot of people don't know the history of our reservation. They don't know the importance of our environment, of our water and things like that," Incashola said. "How that connects everything together for us."

Small Salmon stressed the importance of educating young people, "to get out of school and learn about the reservation," Small Salmon said. "We teach them a lot of things here."

After another shift change, Arlee fifth-grade teacher Andrew HeavyRunner was filling up his students' water bottles and had just worked up a sweat playing double ball with his students.

"I had to get out there and push them around a little bit," HeavyRunner joked.

One of his students, Brooke Tanner, said being at the River Honoring was a lot better than being in class. Like many of the other fourth- and fifth-graders in attendance, she said she was learning a lot.

"We learned about how bears who are hurt or disabled have a harder time finding food so if you have a bunch of bears in a small area, they're probably going to come start eating trash," the 11-year-old said.

She said she enjoyed listening to the elders' stories and learning how to "leave no trace" when camping.

All in all, White was pleased with how the day was going and was looking forward to the next group of kids. She said she hopes the kids leave with a positive experience and greater appreciation for water.

"Water is precious, water is life," White said. "Water is essential for all of us and the reality is we all need to work together."

SEELEY LAKE — The water ebbs and flows, dips and rises, courses and trickles and in some places just stands still.

New bridge waits for birds to fly the nest

Lake County has paused a bridge replacement project to give a family of birds some peace and quiet.

Ethan Vanderburg, left, and Dallas Ellison, fifth-graders from Arlee Elementary, try out backpack firefighting pumps from the Confederated Salish and Kootenai Tribes Division of Fire at the 32nd annual River Honoring on Tuesday on the Lower Flathead River. The event brings fourth- and fifth-grade classes from the area to teach students about natural and cultural resources of the river.

Novalii Corum, a fourth-grader from Ronan, watches a demonstration of how pollutants can enter wetlands and waterways at a River Honoring educational station on Tuesday.

Polson fifth-graders gather up markers representing foods that bears eat at a CSKT Fish and Game station at the River Honoring on Tuesday. Tribal and state wardens talked to students about resources bears need to survive, and why careless practices by humans can lead to conflicts with bears.