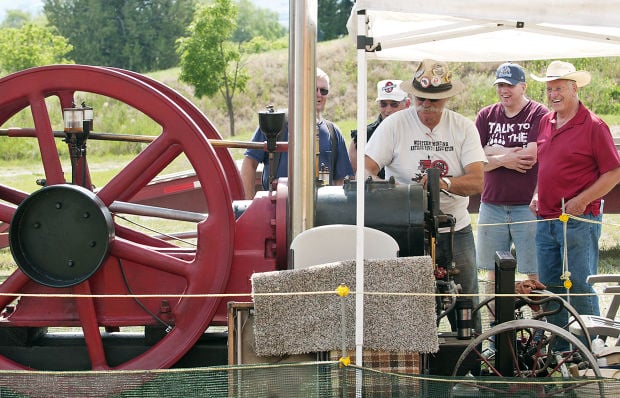 Mike Rose, center in white shirt, starts up his 1916 Reed oil field engine on Friday at the Fourth of July celebration at Fort Missoula. Rose said the engine was used in oil fields in Pennsylvania and ran on wellhead gas at the time. 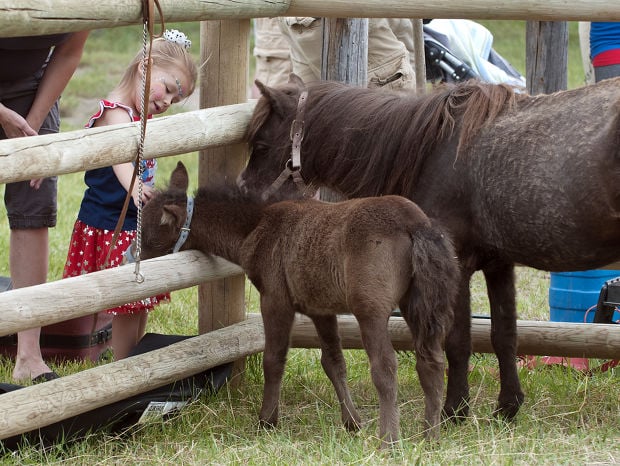 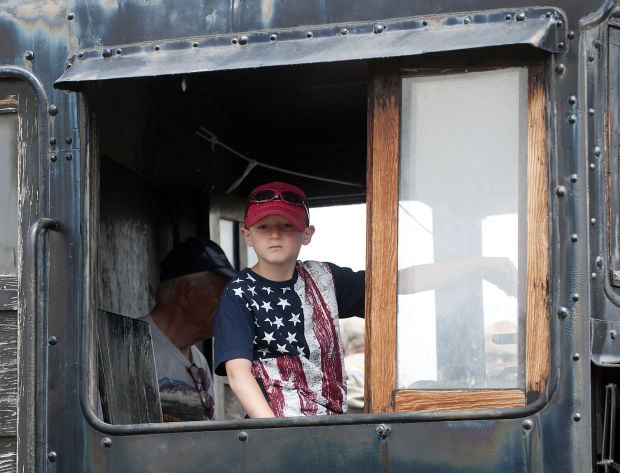 Wyatt Moore, 10, sits in the train engine at the fort on Friday as kids climbed in and rang the engineer’s bell.

Fort Missoula was a crowded place to be Friday as thousands turned out for the city’s 38th annual Fourth of July celebration.

“It is so great, I think this is the best crowd we’ve ever had,” Susan Campbell Reneau said.

With her red, white and blue cowboy hat and flag-print dress Reneau, the day’s master of ceremonies, walked through the throng of people, making sure everyone had a program and letting them know where to go for the next big attraction before returning to the gazebo stage to announce the next band.

“I love the Fourth of July even more than I love Christmas,” she said.

Near the Historical Museum at Fort Missoula, parents and children waited at the stairs to an old train engine for their turn to climb inside and yank on a cable to ring the engine’s bell.

Lisa Bishop and her husband Torry brought their 1-year-old son Griffin to the fort as a way to get outside and have some fun during the holiday. She said in addition to letting Griffin ring the bell, they also took in the model train building and tepee burner, and were looking forward to the miniature horses for kids to ride.

Near the train, a group from the Society of American Foresters gave demonstrations using the old steam-powered sawmill at the fort.

Dozens of people stood a few feet from the sawmill, where a crew was operating the machinery. The sawmill’s blade and sled are belt-driven by a 1916 J.I. Case steam engine that was rebuilt and placed at the fort 19 years ago by Marvin Troutwine.

The live steam engine originally was designed for a tractor to pull 10 plows at a time, Troutwine said. They were commonly used until the 1920s, when gas-powered engines replaced them.

“A lot of them were sold when Japan paid big money for iron in 1938. They made them bullet shaped and dropped them on Pearl Harbor,” Troutwine said. Once the United States entered World War II, most remaining steam engines were donated to the war effort as scrap iron.

In 1995, Troutwine rebuilt the engine for the fort after gathering parts from across the country and making new 80-inch wheels himself. At full capacity, the machine could turn out about 200 boards per day at the mill.

“It’s great to see people come out and appreciate it and all the history. It makes me feel really important,” Troutwine said.

It wouldn’t be the Fourth of July without homemade pie, and an organization called Concerned Citizens of Western Montana set up a tent at the fort to fill that need. The group was selling pies to raise money they spend on community projects in the state.

“Veterans are very important to us, and supporting and helping women, as we’re a women’s organization,” said member Vondene Kopetski.

The group came to the celebration with 50 pies, 60 dozen cookies, and three dozen cherry and blueberry cobblers. By noon, Kopetski said, they were close to selling through the whole lot.

On a road trip with his wife and three children from Oklahoma City, Joel Kraft stopped by the fort on their way to Glacier National Park. He said his wife saw a notice about the celebration in a tourism magazine, and they decided to see what it was all about.

His kids spent part of the morning using an antique wash tub, scrubbing clothes against a washboard, then using an old roller to press out excess water.

“I think we’re going to head over to the mall or park up on the hill to watch fireworks tonight,” Kraft said.

Members of the American Legion Post 27 and the Veterans of Foreign Wars Post 209 in Missoula served as an honor guard at the flag ceremony back at the gazebo, with VFW members firing a 21-gun salute after the flag was raised.

“Please join me in celebrating the birthday of the most wonderful country ever created by God,” Reneau said.

The old-fashioned theme of the event celebrating the country’s 238th birthday began with a pancake breakfast courtesy of the Church of Jesus Christ of Latter-day Saints and also included tours of the Sliderock fire lookout, live music, children’s games, food and craft vendors, and demonstrations of yarn spinning and soap making.

The celebration was a fundraiser for the Friends of the Museum, which helps support the Historical Museum.

Tepees rise in Arlee as powwow gets underway

ARLEE – Home is where the tepee rises for dozens of families this week at the 116th annual Arlee Celebration. That’s no big surprise, since the West’s oldest continuous powwow draws those who tend to pay close attention to their tribal traditions. For many in this part of Indian Country, the tepee is an integral part of that.

Nestled between two large wilderness areas, Seeley Lake will honor the Wilderness Act with a bang.

Fourth of July across the USA

Would you eat a sea cucumber? How the Chinese delicacy is cooked

Would you eat a sea cucumber? How the Chinese delicacy is cooked

Mike Rose, center in white shirt, starts up his 1916 Reed oil field engine on Friday at the Fourth of July celebration at Fort Missoula. Rose said the engine was used in oil fields in Pennsylvania and ran on wellhead gas at the time.

Wyatt Moore, 10, sits in the train engine at the fort on Friday as kids climbed in and rang the engineer’s bell.