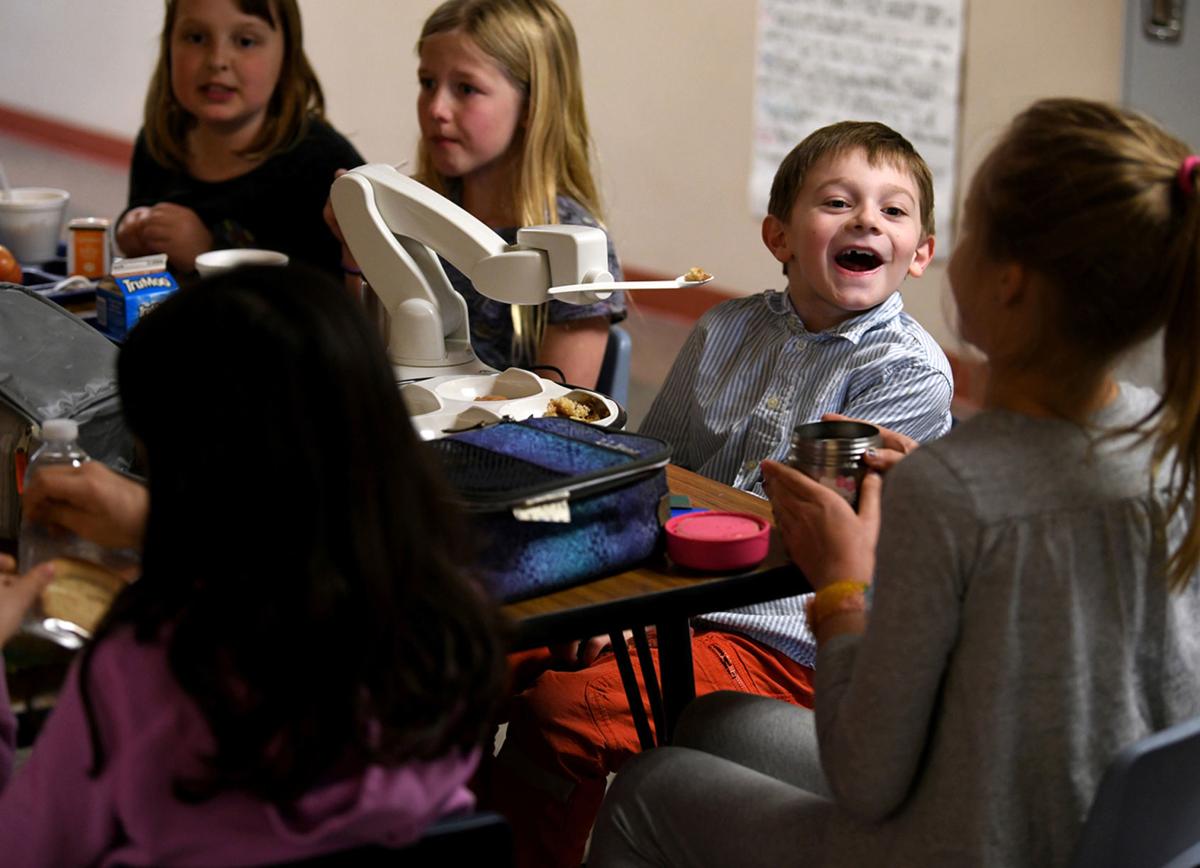 Nine-year-old Heath Montgomery shares a laugh during lunchtime with classmates at Paxson Elementary School where Montgomery, who has cerebral palsy, recently began using an Obi robot feeding assistant to help him eat his meals. The machine frees him from needing adult help during meals and has transformed his social life, says his mother, Jenny Montgomery. 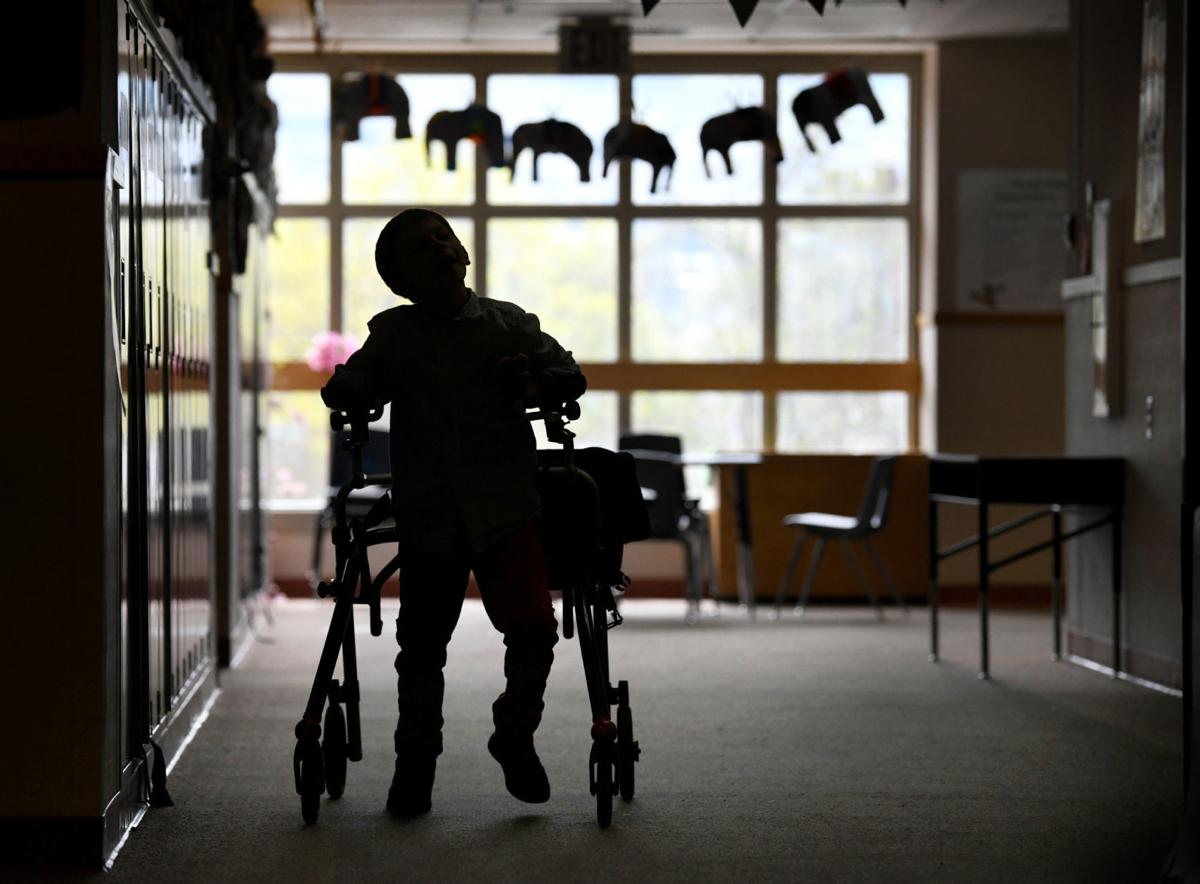 Montgomery, who continues to fight for his independence in the face of his disabilities, walks toward class after lunch. 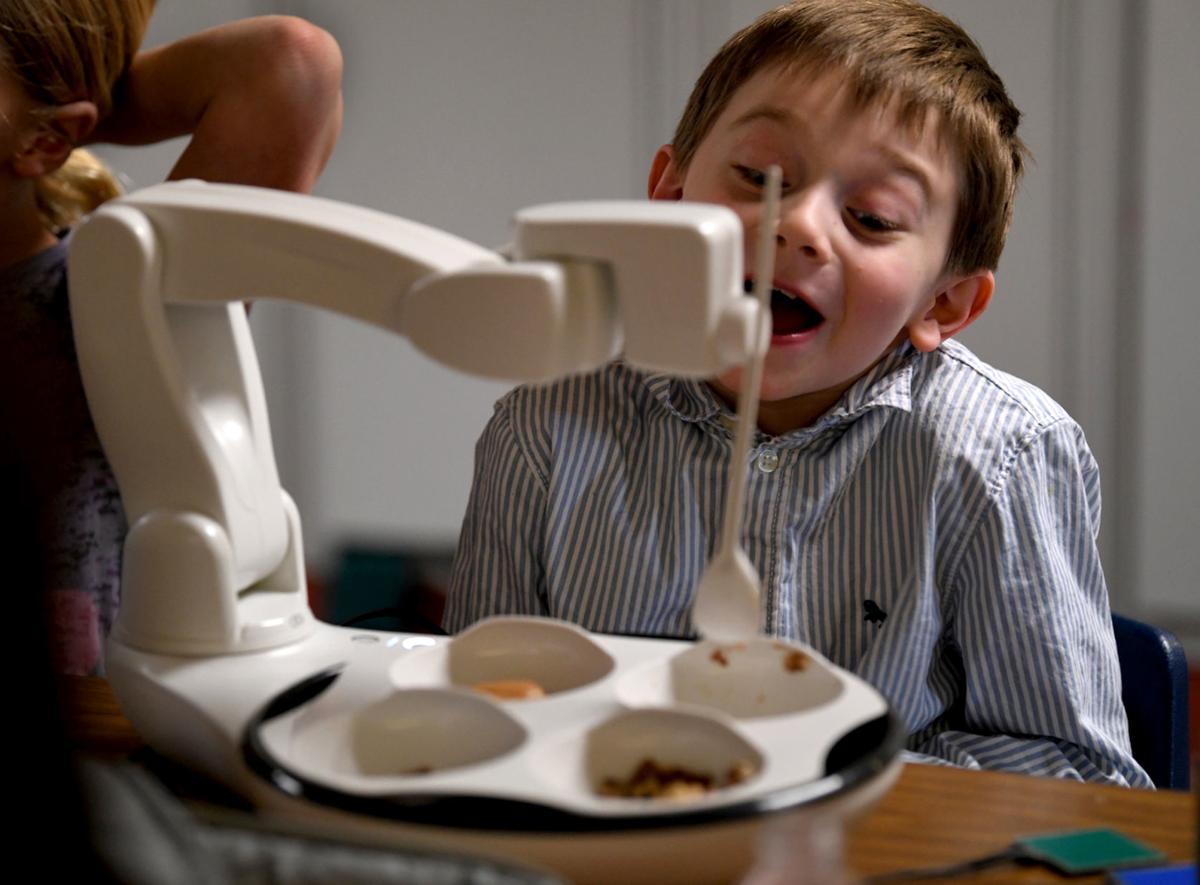 "Before I had the Obi," says Montgomery, "I had to be fed and I kind of felt like a baby. But with this, I can feed myself, so I don't feel like a baby."

During a recent lunch period at Paxson Elementary School, a group of third-graders gathered around a table to eat, opening their lunchboxes from home, or setting down their cafeteria trays. One student brought something different: a device that looked like it came from a Star Wars movie.

Nine-year-old Heath Montgomery, who has cerebral palsy, sat down for lunch before his new robot feeding assistant, Obi.

Heath’s friends all watched excitedly as Obi woke up. The device is essentially a platter with four different serving bowls, attached to a robotic arm with a spoon at the end. Heath can control the robot’s arm by pushing different pads that instruct it to scoop from his bowl of choice, and to bring the food to his mouth.

“Freedom!” Heath exclaimed as Obi served him his first bite.

For Heath’s entire life, he’s had to be fed by someone else due to the muscle spasms in his arms. During playdates, that meant his parents always had to be around to feed him. At school, his aide would join him for lunch, making organic kid-to-kid conversations and interactions a little less possible. It also meant he didn’t have much control over his own eating.

The robot, which Heath acquired about five weeks ago, gives him independence. He can choose what to eat, how much, and when. Plus, it's a big hit among his friends, who treat Obi like a friendly addition to their lunch table, talking to it like it’s got a personality.

“Before I had the Obi, I had to be fed and I kind of felt like a baby,” Heath said at lunch. “But with this, I can feed myself, so I don’t feel like a baby.”

The technology, released within the past two years, is the brainchild of Jon Dekar, who witnessed his grandfather’s frustration with needing help to eat due to a progressive neurological disorder. Heath got to try the Obi for the first time at MonTECH, Montana’s assistive technology program housed at the University of Montana.

MonTECH has more than 1,000 devices for people with disabilities, and Heath has tried dozens for eating, without success. MonTECH ordered a trial model of Obi in the fall, and when Heath tried it out, he, his family, and MonTECH staff were blown away.

“I told someone that in my time as director, this is the coolest technology that I've seen,” said Anna-Margaret Goldman, program director at MonTECH. “A lot of times you see technology with great potential, but you can also see flaws in the product, and this is a product where they really thought of everything, and seeing it in action is pretty magical.”

Heath wound up getting MonTECH's only Obi, but if there's more interest in the community, Goldman said they can order more.

The device has impressive features that mimic how people typically eat. For example, after scooping a certain number of times from one bowl, the robotic arm will pile up the remaining food in the middle, to make scooping full bites easier.

It can also sense when a bite that’s being offered hasn’t been taken after a certain amount of time, and will respectfully remind the user by moving back and forth, before resting back on the platter.

Heath’s favorite thing about Obi, he said, is “everything.” He enjoys the little motions that seem like Obi’s personality traits: how Obi falls asleep after a while, and reminds him there’s a bite ready. When he switches from his platter of sandwich pieces to the platter with his homemade lavender scone, Obi even scrapes off its spoon to keep it clean.

One of Heath’s lunchmates, 8-year-old Autumn Hall, said she and her friends have begun thinking about ways to expand Obi’s ability in future models.

“We were all thinking the next generation of Obi could have a fork and a spoon, or be able to pick up your water bottle and open it,” she said.

Jenny Montgomery, Heath’s mother, said she believes robots are the future of caregiving. After trying maybe 20 different spoons designed to help Heath eat independently, Obi is the only one that worked, and it has made a huge difference, she said.

“I really, really see how much it changes things for him in the conversations he’s able to have and the interactions with his peers he’s able to have when there isn’t an adult shadowing him,” she said. “He never knew anything different, so for him, he’ll say that he’ll give the Obi an 11 out of 10 on a scale of wonderfulness, and being fed by an adult he says is like a 3.

"But that’s all he ever knew in his life, so for him, something wonderful and unexpected opened up.”

Obi operates on a rechargeable battery, so it can also be used in restaurants, on picnics at the park, really anywhere. The device costs about $6,000, which Montgomery said was covered, after a legal battle, by a Medicaid program called Early Prevention Screening Diagnosis and Training.

Heath’s third-grade class is currently wrapping up a unit on robotic technology with their teacher Wendy Lofthouse, who studied technology education. It was “icing on the cake” for Heath to show up during that unit with a new robot, Lofthouse said.

Lofthouse has long been an advocate for technology as a means for making education more accessible to students with disabilities. Her son Devin, now 25, also has cerebral palsy.

Computer technology made learning more accessible to him, opening a world with fewer limitations and physical demands. He's able to use the joystick on his power chair to work on his computer. Last year, he worked for UM's IT department, adjusting the code for all the University's websites so they were ADA compliant.

Lofthouse said they’re hoping to get Devin an Obi as well, after seeing how successful it has been with Heath. In the classroom, Lofthouse also uses several methods for making assignments accessible to everyone, including using iPads and programs that transcribe students’ words instead of requiring students with disabilities to physically write, or use a scribe.

“When you meet Heath, technology makes you able to see him in his truest light,” Lofthouse said. “What I mean by that, is he’s so incredibly intelligent, and technology has allowed the world to see that brilliance. I think that’s the part that gets me the most excited. It gives Heath an opportunity and a platform to show how brilliant he is.”

“This morning he asked, ‘Do I really get to keep this? For the rest of my life?’" she said. "He can’t believe it’s really his.”

Missing the movie at the AMC's Missoula dine-in theater

With about 20 minutes left in “A Quiet Place,” my server dropped off the check and took my plate. She whispered if I would like a refill.

The starting gun fired, and Heath Montgomery took off.

Nine-year-old Heath Montgomery shares a laugh during lunchtime with classmates at Paxson Elementary School where Montgomery, who has cerebral palsy, recently began using an Obi robot feeding assistant to help him eat his meals. The machine frees him from needing adult help during meals and has transformed his social life, says his mother, Jenny Montgomery.

Montgomery, who continues to fight for his independence in the face of his disabilities, walks toward class after lunch.

"Before I had the Obi," says Montgomery, "I had to be fed and I kind of felt like a baby. But with this, I can feed myself, so I don't feel like a baby."