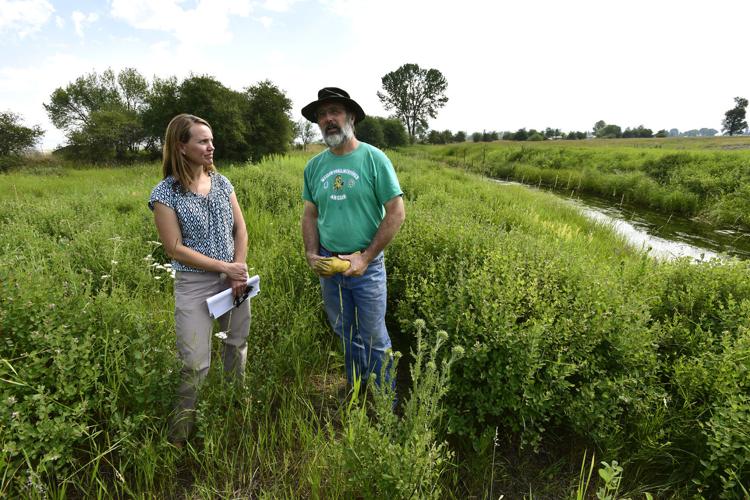 Sarah Richey of Five Valleys Land Trust and Brad Isbell stand on some of his property in Grass Valley west of Missoula that he placed into a conservation easement recently. Isbell’s 75 acres of wildlife habitat and prime farmland will be protected from development in perpetuity. 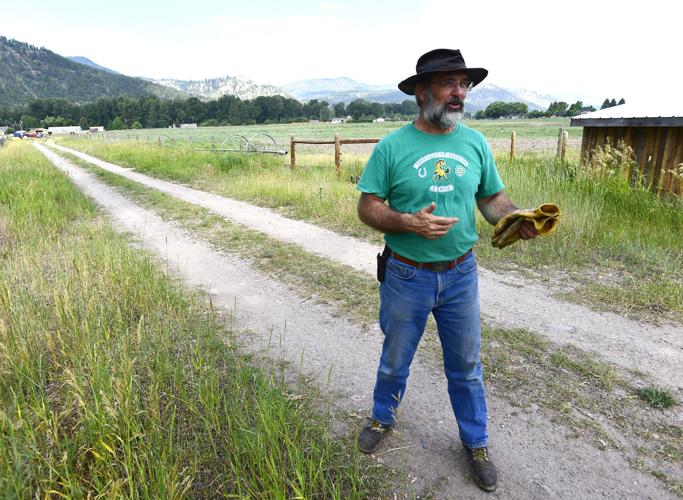 Isbell raises Gotland sheep on the agricultural acres of the property. He says it's important to be able to protect local farmland.

GRASS VALLEY – At one point six years ago, these pristine 75 acres of high-quality farmland west of Missoula were slated for a controversial 30-home subdivision, later approved for 16 lots as a compromise. It would have been called Blue Heron Estates, and like many subdivisions, it would have been named for the creature whose habitat it would have partially destroyed.

With a natural groundwater slough that feeds native vegetation like mature hawthorn trees and cottonwoods, it’s prime riparian wildlife habitat, a home for everything from great blue herons to woodpeckers to muskrats to black bears.

However, the pastoral property near the Clark Fork River will now be protected from future development – and therefore saved as an important agricultural production ground – for eternity. Landowner Brad Isbell and his family worked with Five Valleys Land Trust in Missoula to place the entire 75 acres under a conservation easement.

As more and more development occurs on flat, well-drained pieces of land on Missoula’s fringe – the very places that also contain the best soil for farming and ranching - protected properties like Isbell’s ranch will become increasingly important to preserve the county’s local food security and natural ecosystems.

According to Missoula County’s Community and Planning Services office statistics, almost 29,000 acres of farm and ranch land in the county have been converted to subdivisions or other nonagricultural uses since 1986.

Since a proposal to create regulations to mitigate the effects of development on agricultural land was struck down by county commissioners last year, voluntary conservation easements remain the best option to preserve the remaining critical soils. Isbell bought the Blue Heron Estates land in 2013.

“There are better places to build houses and once this is paved over, you’re done,” Isbell explained. “That’s always been in the back of our mind as a possibility. This one just seemed like it was a good opportunity for a conservation easement because other people had in mind that it should grow houses instead of agriculture. And that just didn’t seem right, so it was a pretty easy decision to just back away from the subdivision.”

He raises a herd of Gotland sheep on the property now, although it’s taken him years to get rid of the weeds on the property without using chemicals. In the future, he has plans to build a sort of eco-lodge where people can view wildlife and learn about the landscape.

The Montana Department of Natural Resources and Conservation has studied Isbell’s land, and it contains what the DNRC officially terms “prime farmland if irrigated” – the second-best soil quality ranking in the state, based on its nutrients and composition.

Sarah Richey, conservation project manager with Five Valleys Land Trust, said that land is not only rich in great soil but also contains an incredible amount of biodiversity.

“The Five Valleys Audubon Society has designated this as an important bird area because of the rich bird habitat that is kind of supported by the Clark Fork River and all this wet open space out here,” she said.

Richey said the original subdivision proposal was met with opposition because county residents were concerned about the loss of such prime habitat.

“It was just going to cover this whole area,” she said. “Now what we’re seeing is protection of the whole piece as one. For Five Valleys Land Trust this is just a great example of how voluntary conservation can protect these ag soils, this bird habitat, and it’s here for generations to come. It’s working because Brad wants to do it. It supports his goals, it supports what’s important to him too. So it’s kind of a win-win.”

Although landowners can stipulate in a will or covenant that they don’t want the property to be developed, that can be undone after the owner’s death if subsequent family members have different plans. A conservation easement means that there is a restriction on the property’s title forever, and Five Valleys Land Trust will be there as a steward every time the land changes ownership to make sure the terms of the legal agreement are upheld no matter what regulations or laws change in the future.

Because a conservation easement reduces the resale value of the land because it is no longer unencumbered, Five Valleys Land Trust often works with the landowner to compensate them for that loss of value. In many cases, they solicit money from the $10 million open space bond approved by Missoula County voters in 2006. In this case, however, Isbell is simply donating much of the loss of value.

“For him, it’s this assurance that it’s going to stay like it is,” Richey explained. “He’s going to be donating a large amount of value. I think it aligns well with the goals of the open space bond, so we’ll be seeking somewhere in the neighborhood of $150,000 from that fund. We try to never leave a landowner high and dry. But if they donate, it is a charitable gift.”

Richey said that voluntary land conservation is what Five Valleys Land Trust is all about.

“This is what we’ve been in business for 40 years doing, is waiting for people to say ‘Yeah, this is right for me,’ and so for us this is an example of how it works so well in an area close to Missoula with high development pressure and great soils,” she said.

Since the early 1970s, Five Valleys Land Trust has worked with roughly 150 different landowners to protect more than 80,000 acres around western Montana.

Isbell said he’s not sure what the area will look like in 100 years given the rapid development, but he believes the community in the future will be thankful that previous generations protected farmland.

“This kind of ensures it will stay in agriculture,” he said. “You don’t want to build on something like this. You can make a lot more money growing houses out here. But once you go down that path it’s done.”

For him, it’s important that there are options for Montanans to buy fresh, pasture-raised lamb produced without pesticides or herbicides rather than imported frozen meat that was flown in from a huge feedlot in Australia.

Isbell said he would recommend conservation easements to other landowners, especially because there are tax savings involved which can be used to buy out family members who aren’t interested.

“It’s not for everybody, but the land doesn’t need to suffer for that,” he said. “If we want local beef and local food, we better keep these good soils.”

Breaking trail: Land managers gather to share ways of getting us here to there

We humans have been making trails about as long as we’ve been banging rocks together, but that doesn’t mean we’ve mastered the task.

When he was running up the record as Missoula’s longest-serving City Council member, Jack Reidy had a regular criticism of the Open Space prog…

As this year’s temperatures start to rise and the growing season quickly approaches, learn about land management practices at a “Landowner Sem…

No one knows for certain when this house just off the Burnt Fork Road was built.

BILLINGS – A key federal funding source for Montana public lands and parks has stalled in the U.S. Senate, possibly for the next six months.

A joint meeting Wednesday will decide whether 75 acres in the Grass Valley, bought using city and county open space bonds, will be approved or…

In a fall season that’s already seen the spending of more than $1 million in open space bonds on more than 650 acres, the Missoula Board of Co…

Sarah Richey of Five Valleys Land Trust and Brad Isbell stand on some of his property in Grass Valley west of Missoula that he placed into a conservation easement recently. Isbell’s 75 acres of wildlife habitat and prime farmland will be protected from development in perpetuity.

Isbell raises Gotland sheep on the agricultural acres of the property. He says it's important to be able to protect local farmland.