Become a Member
Read Today's E-edition
Share This
From fires to COVID, Mow prepped Glacier for change
0 Comments
Share this
1 of 3 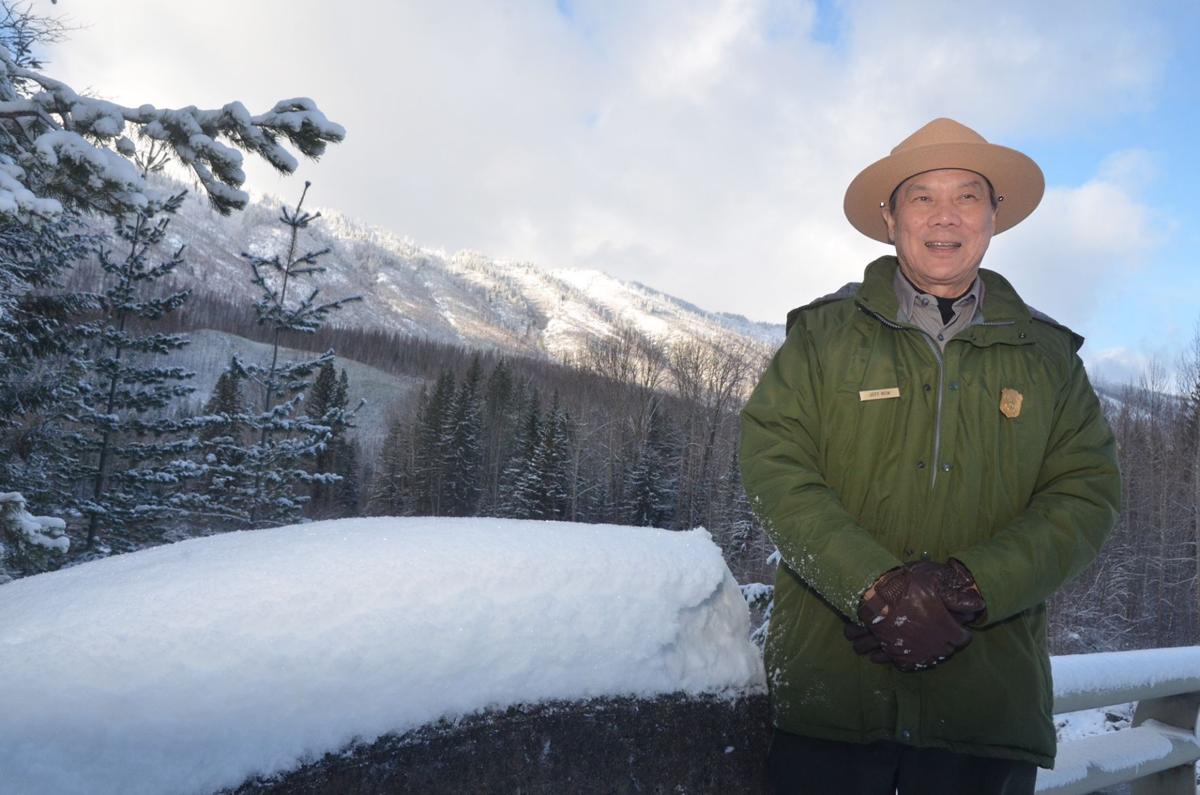 Glacier National Park Superintendent Jeff Mow will retire at the end of 2021, having spent eight years at Glacier and 33 with the National Park Service. 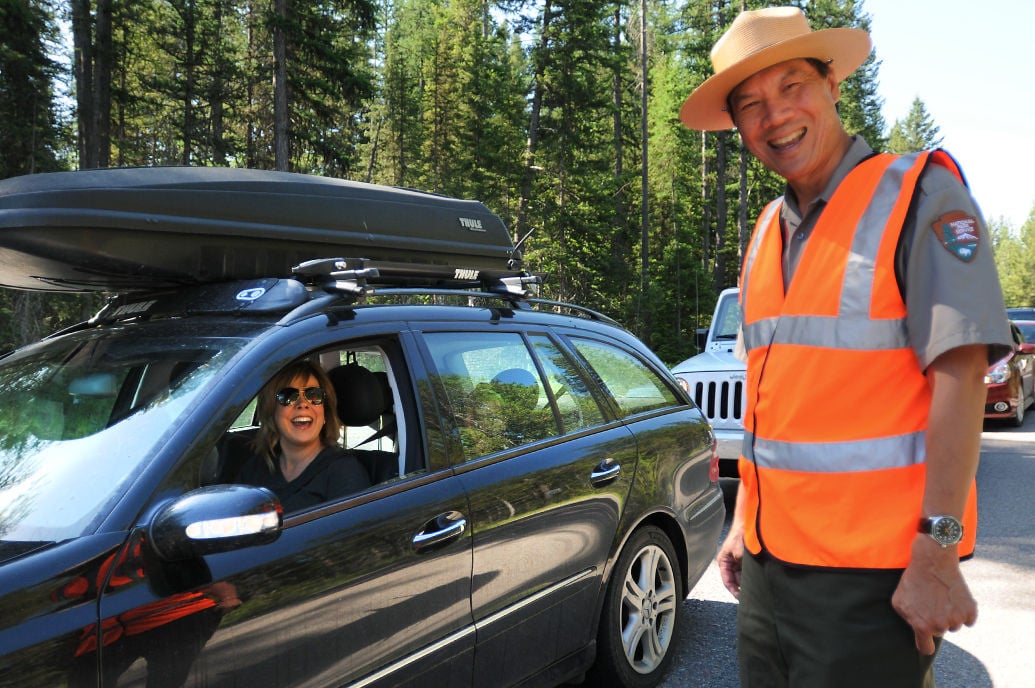 Becky Janssen of Bakersfield, California, is all smiles after being selected by Glacier National Park Superintendent Jeff Mow to represent the 100 millionth visitor to the park in 2015. 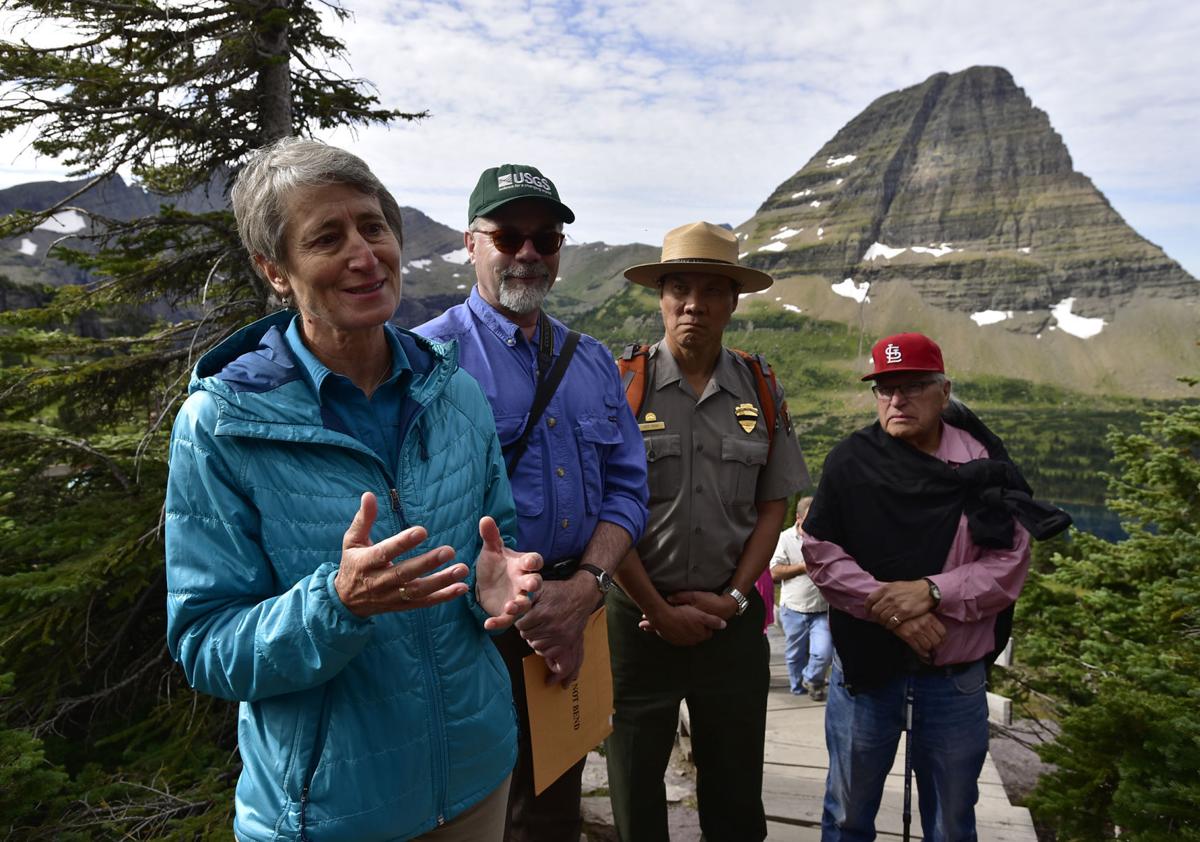 Former Interior Secretary Sally Jewell talks during a tour of the Hidden Lake Trail from Logan Pass in Glacier National Park during the 100th anniversary of the National Park Service in 2016. With Jewell are Dan Fagre of the United States Geologic Survey, Glacier Park Superintendent Jeff Mow and Blackfeet Tribal Chairman Harry Barnes, from left.

“I haven’t sat in this office in eight months,” Mow said on a recent Friday morning. “This is my first day back from Alaska.”

It was also one of his last days as the superintendent of Glacier National Park. After 33 years with the National Park Service — eight of them leading Glacier — Mow is retiring at the end of 2021.

Coming off a temporary detail overseeing all of Alaska’s national parks for the summer, in the same year Glacier imposed its first-ever ticketed entry system on Going-to-the-Sun motorists, on the heels of the COVID-19 pandemic that rocked the tourism industry, Mow could be excused for seeking a rest.

But looking back over his career, he believes this may be the new pace of change for America’s wild places.

“I really noticed it with the Reynolds fire,” Mow said, referring to a 2015 catastrophe that nearly burned over the Rising Sun campground before rambling into Glacier’s backcountry and burning for months. “What I saw for staff who were just hired that summer, who hadn’t seen a fire this big and suddenly had to get out and leave, a number of them were just not the same afterward. They were not prepared mentally.

“And I thought — how do we make staff more resilient and adaptable, more flexible?” Mow said.

The Reynolds fire closed park facilities, kicked people out of their offices and routines, and snarled traffic throughout the park. It increased tourist parking at Logan Pass, which in turn stressed the water supply at the top of the Going-to-the-Sun Road. In many ways, Mow said the Reynolds fire foreshadowed the visitor volume challenges that led to ticketed entry six years later.

Then in 2017, the Sprague fire tore through the western side of the road corridor and destroyed the dormitory of the historic Sperry Chalet. The stone-walled outpost had provided beds and meals for thousands of tourists over the decades, and many of them shared their opinions about what could or should be rebuilt.

Glacier’s visitation has grown from thousands to millions a summer, and Sperry is one of only two mountain hotels accessible only by trail in the park. Mow said the decision on rebuilding could shape Glacier’s character for the next 100 years.

“(Sperry concessionaire) Kevin Warrington said ‘if you expand, this is what changes,’” Mow recalled. “’It’s no longer just the people who are sleeping overnight and sharing the dining hall experience with others from all over the world. If you expand, I have to change the way I do meals.’ We rebuilt it just as it was, so if you had a grandmother who stayed there, you could have that same experience.”

Other experiences have refused to remain so stable. While backcountry camping use hasn’t changed significantly, Mow said frontcountry use of trails, picnic areas and day activities has exploded. Commercial operators and outfitters reported seeing guests with far less wilderness experience than in the past. Glacier’s traditional reputation as a place for more-experienced visitors was getting overwhelmed by first-timers.

“It’s a great thing to get people outdoors, but the numbers can get overwhelming at times,” Mow said. “We’ve had to have closures in May because of overuse. Things used to be driven by the school year, where we didn’t get into full swing until around July 4 and come Labor Day, everything dropped off. Now our growth in the shoulder seasons is significant.”

Then came the pandemic of 2020, which brought the weirdest of both worlds. On one hand, visitors seeking isolation paradoxically flocked to national parks. And the parks, fearing infection, had to cut back on personnel and services.

And then the Blackfeet Tribal Business Council announced it was closing public access to all the Glacier Park entrances bordering the Blackfeet Indian Reservation. That meant East Glacier, Two Medicine, Cut Bank, St. Mary and Many Glacier were suddenly unavailable.

“He built bridges in the Flathead and Blackfeet communities that had never been built before,” Jamison said. “He was able to maintain an eastside closure to protect his Blackfeet neighbors and respect their wishes as a sovereign nation, and still keep his job.”

Part of that job was balancing between national directives to keep parks open and then Montana Gov. Steve Bullock’s support of the Blackfeet closure order. For their part, the Blackfeet maintained that the risk of epidemic exposure to coronavirus so threatened their elderly cultural tradition keepers, they could not risk having freeway-loads of strangers passing through the reservation before any vaccine or reliable treatment was available.

“That wasn’t a hard decision on my part,” Mow said. “We could open the west side in a responsible way, and turn people around at Rising Sun.”

The vaccines and treatments arrived and the Blackfeet rescinded their closure order. But then in the beginning of 2021, Mow got word that lots of roadwork was set for U.S. Highway 2 around West Glacier.

“In 2019, we had backups on Highway 2 going back two or three miles — we’d never seen that before,” Mow said. “In the past, if the traffic backed up, we could flush it — send everyone through the gate without stopping. But we couldn’t do that in 2020, because there was nowhere to come out on the other side.”

Construction delays on Highway 2 in 2021 were a variation of the same problem. Visitors were already overloading the Going-to-the-Sun Road. Adding impatient highway travelers who hoped to make a scenic detour through the park would just aggravate the problem. The challenges foreseen in 2015 were materializing.

“No one wanted to have ticketed entry,” Jamison said of the 2021 solution. “Jeff understood we had to have it, so he got buy-in.”

The policy made travel on the Going to the Sun Road more comfortable, with parking lots open and picnic tables findable. But it did push new crowds north to Polebridge and its limited facilities. Ticketed entry will return this summer, with a new ticket for the Polebridge area. COVID staffing rules haven’t yet been settled for the 2022 summer, so that could bring some changes. And Yellowstone National Park will celebrate its 150th anniversary, likely boosting the overall national park traffic in Montana.

But those will be the challenges for the next superintendent.

Motorists will need tickets for both the Going-to-the-Sun Road and Polebridge when visiting Glacier this summer.

With one wildfire menacing Going-to-the-Sun Road and another threatening to hop the Continental Divide into the Two Medicine basin, the last t…

Holiday travelers should have relatively easy times getting home this weekend before a new bout of snow flurries hit western Montana.

The possibility of adding more commercial telecommunications to a place where many visitors come specifically to disconnect from the outside world concerns many people.

Yacht squeezes under bridge with less than 5 inches of clearance

Glacier National Park Superintendent Jeff Mow will retire at the end of 2021, having spent eight years at Glacier and 33 with the National Park Service.

Becky Janssen of Bakersfield, California, is all smiles after being selected by Glacier National Park Superintendent Jeff Mow to represent the 100 millionth visitor to the park in 2015.

Former Interior Secretary Sally Jewell talks during a tour of the Hidden Lake Trail from Logan Pass in Glacier National Park during the 100th anniversary of the National Park Service in 2016. With Jewell are Dan Fagre of the United States Geologic Survey, Glacier Park Superintendent Jeff Mow and Blackfeet Tribal Chairman Harry Barnes, from left.