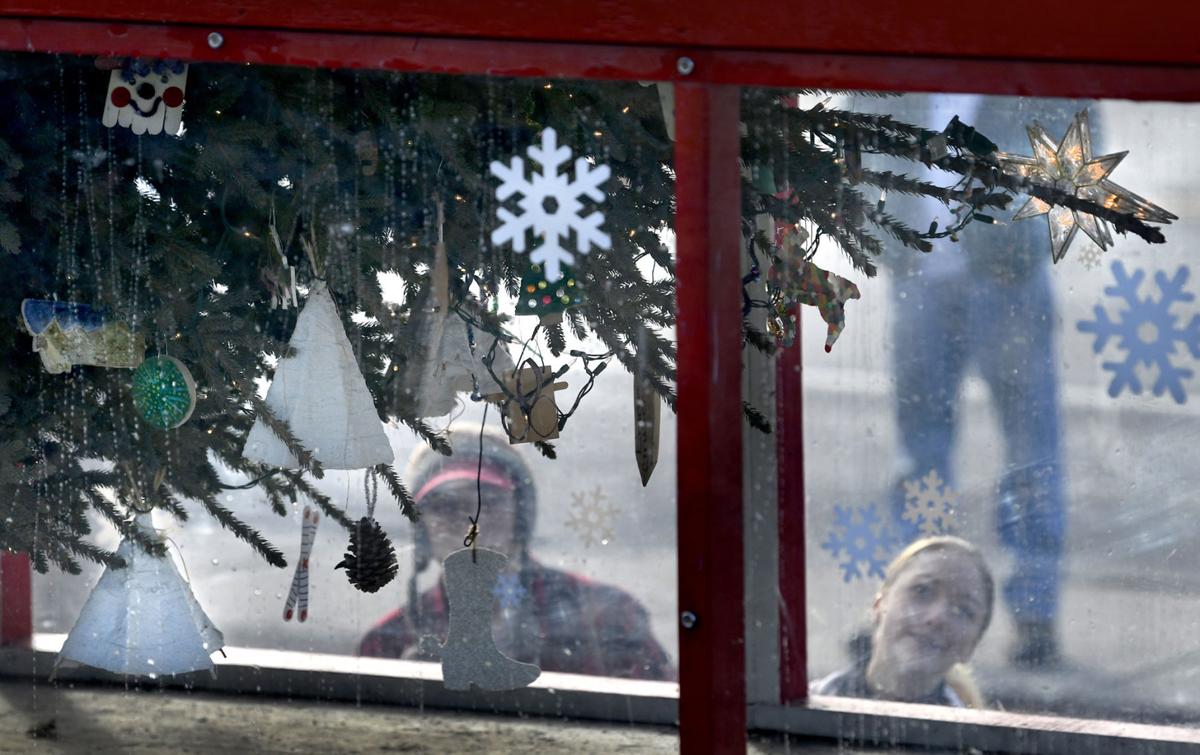 A couple of the hundreds of townspeople to visit the Capitol Christmas Tree Wednesday, during a stop in Thompson Falls, peer in on the tree encased in Plexiglas and completely covered on an 83-foot long trailer with only the top visible. The tree is being trucked from the Kootenai National Forest where it was cut to Washington, D.C., and is making stops in several Montana communities along the way. 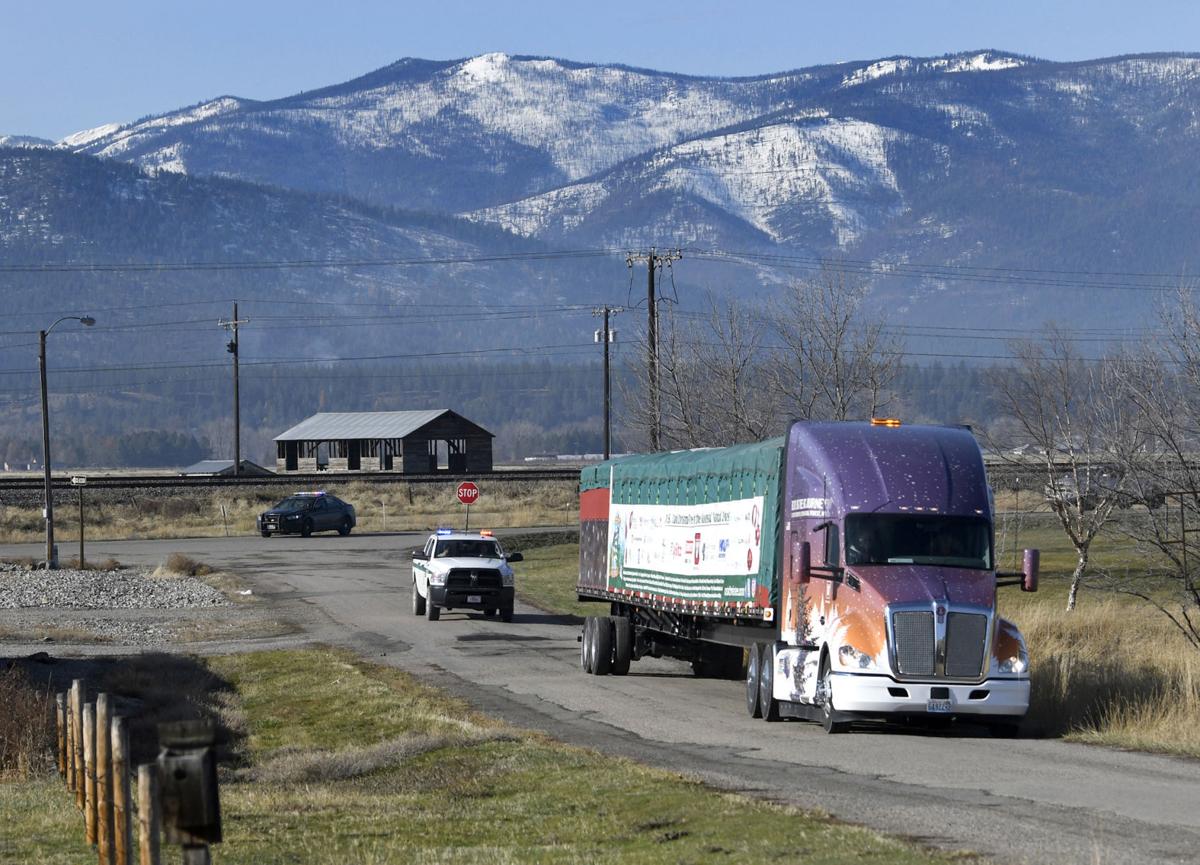 With a police escort, truck driver Larry Spiekermeier, pulls the precious cargo into his hometown of Plains Wednesday for an unscheduled stop that he requested. 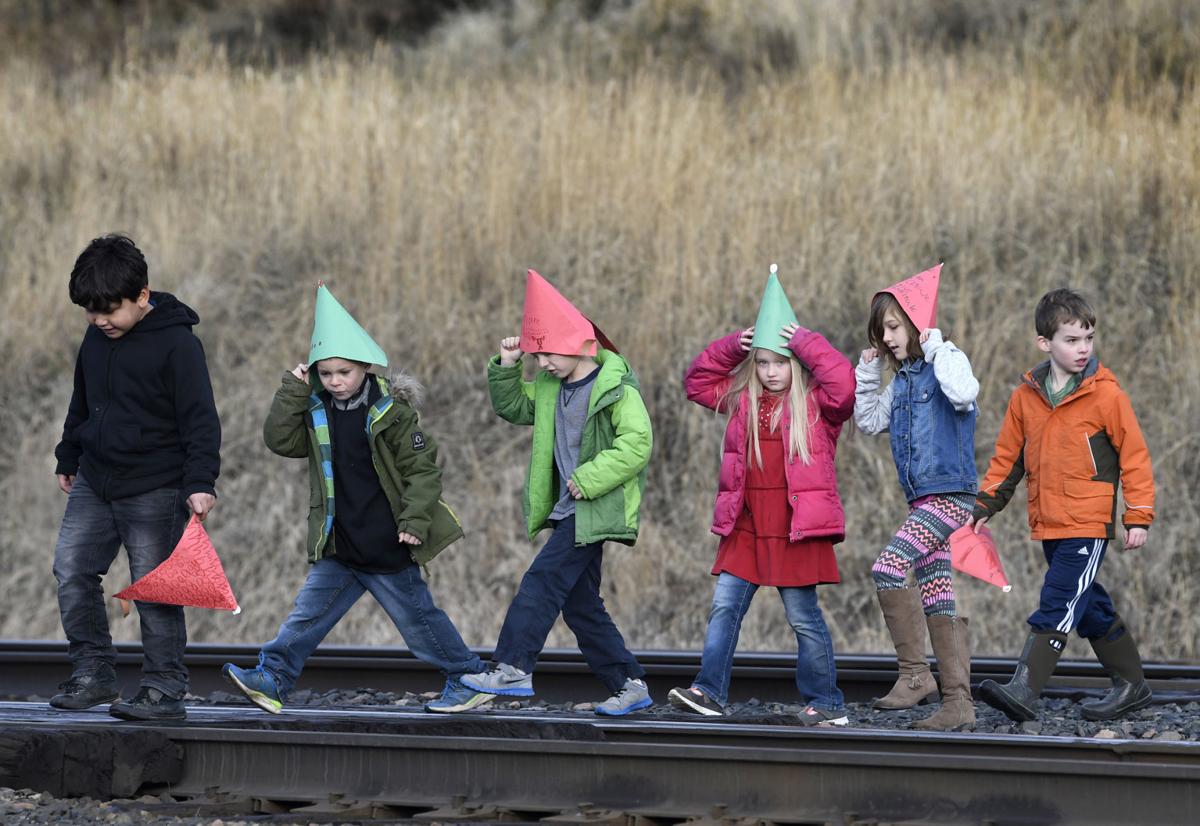 Schoolkids in Thompson Falls hang on to the Christmas hats they made for the occasion while crossing the railroad tracks between the school and downtown to visit the tree where it was parked. 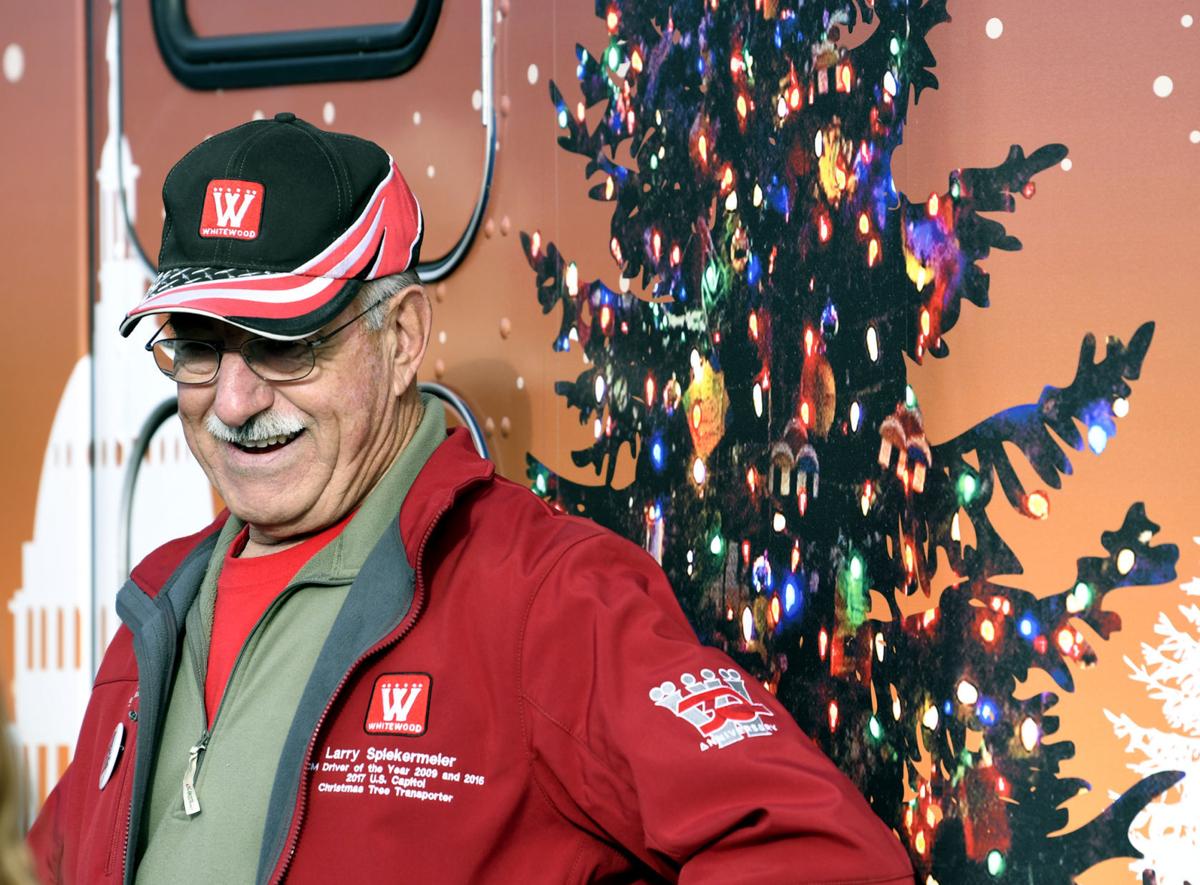 Truck driver Larry Spiekermeier has become a hometown hero since being selected to deliver the tree to the Capitol in Washington, D.C. "This is the crown jewel of my career," he says.

PLAINS — How Montana is this tree?

The 79-foot Engelmann spruce on its way to Washington, D.C., grew up these past 76 years on the Kootenai National Forest in the Yaak country of northwestern Montana.

At noon Wednesday, the third day of the 2017 U.S. Capitol Christmas Tree’s cross-country tour, Larry Spiekermeier pulled his decked-out Kenworth truck and 83-foot long trailer in front of the Plains school. He parked across Rittenour Street from his mother-in-law’s house.

Minutes before, Cindy Emmert waited with her friend, Jetta Aldridge, and ticked off the reasons she was there.

“Are you kidding?” she joshed. “We live in little Hot Springs, population 580, and the tree came from Montana, and Donna Redmond is one of our good friends and she’s a cousin of Larry, the truck driver.”

“We’re just proud that the tree is coming from Montana, so we wanted to support it,” said Lara Aldridge, Jetta’s daughter-in-law, who brought the Little Bitterroot 4-H Club from Hot Springs to the event. “The guy driving the truck has known me since I was born, so it’s neat to support him too.”

The star attraction is the giant tree, stuffed as it were into the trailer with its own internal watering and heating system. Only the top end can be seen through cellophane by the crowds who’ve flocked in what Forest Service Region 1 spokeswoman Debby Hassel called “overwhelming” numbers to stops in Eureka and Whitefish on Monday; Libby, Troy and Trout Creek on Tuesday, and Thompson Falls and Missoula’s Southgate Mall on Wednesday.

Between the last two stops, Spiekermeier pulled his load into Plains, his hometown since 1975.

Here, especially, the tree had to share the attention with its amiable driver, who lives four miles out of town with wife Mary Ann.

Spiekermeier was the Montana driver of the year in 2009 and 2015 by the Motor Carriers of Montana Association and has 1.6 million accident-free miles under his belt. But he’ll be forever more known as the man who drove the Capitol Christmas Tree more than 3,000 miles — and loved every minute of it.

“He’s the biggest kid here,” said school Superintendent Thom Chisholm, who estimated some 600 people showed up to see the tree and its driver.

They included K-8 students from Dixon, and followed on the heels of an even larger crowd at Thompson Falls an hour earlier. The program there included Christmas tree songs by elementary school students, a Santa Claus master of ceremonies and short speeches by Thompson Falls mayor Mark Sheets and others.

Spiekermeier requested the unscheduled stop in Plains and another in Fargo, North Dakota, where his daughter and grandchildren live. He spent most of the hourlong stopover posing for pictures with friends, acquaintances and Denise Montgomery’s 14 first-graders.

“We’re going to be following him all the way on the tracker,” Montgomery said, referring to trackthetree.com, which uses three SkyBitz devices on the trailer to transmit a signal of the tree’s whereabouts every five minutes.

“It means a lot to the community to make this happen, and not only that, the joy on the faces of the people, on the faces of the children,” said Spiekermeier, who drives for Whitewood Trucking. “I was hoping it would be like this, and it did turn out just the way I wanted it. And we got sunshine besides.”

He’s fond of reminding people along the route that this Christmas tree isn’t one of the smaller variety that have decorated the Blue Room of the White House every year since 1961. Montana has never sent one of those.

“This is the People’s Tree,” he said, destined to arrive in D.C. on Nov. 27 and stand on the West Front Lawn of the U.S. Capitol. The lighting ceremony is set for 3 p.m., Montana time, on Dec. 6. Ridley Brandmayr, a Bozeman sixth-grader who lost the fingers of his right hand in an accident this summer, was selected by Sen. Jon Tester to flip the switch. He’ll be joined by Speaker of the House Paul Ryan.

It’s the 53rd Capitol Christmas Tree and the third from Montana. The Kootenai National Forest supplied an even taller Engelmann spruce in 1989, while the Bitterroot Forest sent a 70-foot subalpine fir in 2008.

A first for Montana will be the 5-foot copper star on top of the tree, a nod to Butte’s rich copper mining tradition. Designed, planned and funded by Missoula-based Washington Companies, the star features a representation of a bitterroot, the state flower. It was fabricated by Split Mountain Metals of Belgrade and lighted by Western Montana Lighting of Missoula.

Spiekermeier wasn’t paying much attention to the first Capitol Christmas tree that came from the Kootenai Forest 28 years ago.

“I was logging back then,” he said. “I was sawing 'em down and shipping them to the mill. I logged around here, up the Thompson River, when we had the Flodin lumber mill here and the Pack River. Then we had the lumber mill in Plains, and I hauled logs into there.”

Now he’s hauling the most valuable cargo of all, for these first few days through timber country that has seen dramatic declines in production since '89.

“He’s a world-class driver,” said the Forest Service's Hassel. “He excels at having big loads, oversized loads. He’s fantastic at that, so he was picked because of his qualifications.”

“When Larry’s boss told me he was selected, I thought, my gosh, that’s awesome, but I had no idea it was going to be this huge,” said Mary Ann Spiekermeier. “I’m so happy that they got to stop here. It’s like, we'’re going to stop in Plains. We've got to stop. Our kids all went to school here.”

When Spiekermeier pulled out of town, Mary Ann was riding shotgun. She’ll be in the cab with a 76-inch sleeper, swivel passenger seat, rotating table, drawer-style refrigerator, and a 28-inch flat screen TV for the next 900 miles or so, until they get to Fargo on Sunday.

From there, she and the rest of the family will fly to Washington, D.C., for the truck’s arrival. Mary Ann’s mother, Aiko Lanier, will be there too, but she wasn’t home in Plains on Wednesday.

“She’s in Connecticut with my sister,” Mary Ann Spiekermeier said. “She’s going to D.C. to meet us there but she’ll never get to see the truck, and here it is, right across from the house.”

The tree leaves Missoula early Thursday for Helena and then on to Great Falls.

The Christmas tree for the nation's Capitol, cut last week in the Kootenai National Forest, is making its way through Montana this week on the beginning of its journey to Washington, D.C. Here's where to see it along the way:

Wildfire situation may worsen in Northwest this week

Wildfire situation may worsen in Northwest this week

Biles returns to competition with a bronze medal

Biles returns to competition with a bronze medal

The Christmas tree for the nation's Capitol, cut last week in the Kootenai National Forest, will be making its way through Montana this week o…

When the chainsaw roared Tuesday and the chips began to fly off the base of the 79-foot Engelmann spruce destined to light up the U.S. Capitol…

Season of thanks: Missoulians share what they're thankful for this year

These are troubling times in our democracy — and have been since the start. One hundred years ago we were embroiled in a terrifying war in Eur…

There can be no better name for a sawyer than Red Stout.

HAMILTON — The fate of Dr. Chris Christensen is in the jury’s hands.

The hydrodynamic separator will be just 2 feet below you at the next brewfest, concert or Out-to-Lunch in Caras Park, resting snugly just to t…

It's official: Seth Bodnar, an executive with General Electric, will be the University of Montana's incoming president.

PABLO — U.S. Sen. Jon Tester plans to sit down again with the Confederated Salish and Kootenai Tribes before reintroducing legislation that co…

'Now this is my country, too' — 31 become new U.S. citizens in Missoula

Although Gabriela Rodli has lived in the United States for almost 20 years, she said Thursday was the first time she truly felt as though she …

Logjam to switch over to compost-friendly cups, straws, more

An Engelmann spruce from Montana is gracing the West Lawn at the U.S. Capitol this holiday season. The tree, cut from the Koonenai National Fo…

The lights were one thing. At her last count, Ricki Koch estimated there were more than 35,000 of them.

A long way from Montana: Capitol tree is lit in Washington, D.C.

The U.S. Capitol Christmas tree that was shipped from far northwestern Montana is all dressed up and ready for this afternoon’s lighting ceremony.

End of a long journey: Montana Engelmann spruce lights up the darkness at U.S. Capitol

She’s big, beautiful and all dressed for Christmas.

Tales from a night jumper: Thompson Falls man rolls out stories of 86 years

THOMPSON FALLS — He was a boy of 6. Now he’s 86, with a couple of strokes and three heart operations in the rear-view mirror.

A couple of the hundreds of townspeople to visit the Capitol Christmas Tree Wednesday, during a stop in Thompson Falls, peer in on the tree encased in Plexiglas and completely covered on an 83-foot long trailer with only the top visible. The tree is being trucked from the Kootenai National Forest where it was cut to Washington, D.C., and is making stops in several Montana communities along the way.

With a police escort, truck driver Larry Spiekermeier, pulls the precious cargo into his hometown of Plains Wednesday for an unscheduled stop that he requested.

Schoolkids in Thompson Falls hang on to the Christmas hats they made for the occasion while crossing the railroad tracks between the school and downtown to visit the tree where it was parked.

Truck driver Larry Spiekermeier has become a hometown hero since being selected to deliver the tree to the Capitol in Washington, D.C. "This is the crown jewel of my career," he says.