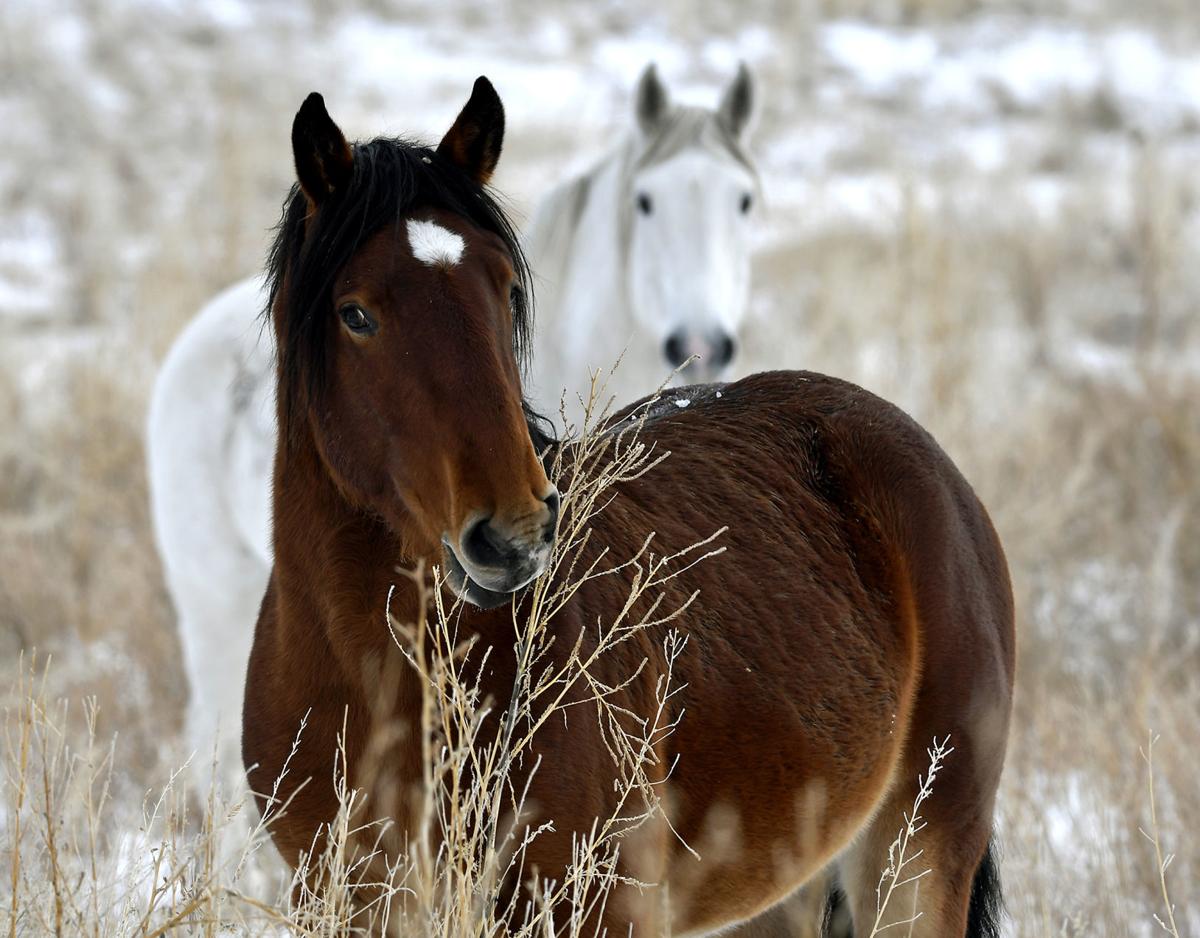 A wild horse grazes on brush recently on the MPG Ranch near Stevensville. About 50 of the horses wander between the Bitterroot and Rock Creek, often seen on grasslands in the winter and disappearing into the forests during summer. 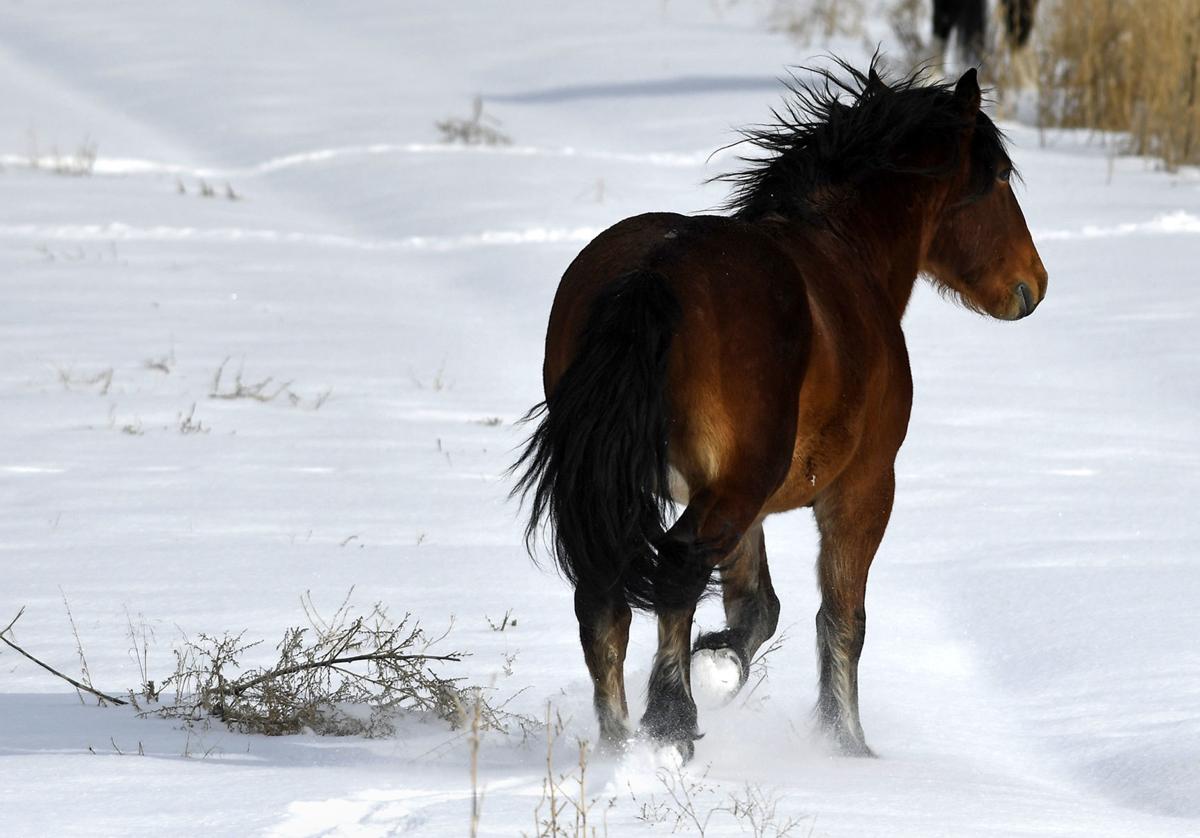 A wild horse roams the MPG Ranch recently. The band of 50 or so are likely remnants of herds the Salish kept when the Bitterroot was their home, along with horses that have escaped from owners over the years. 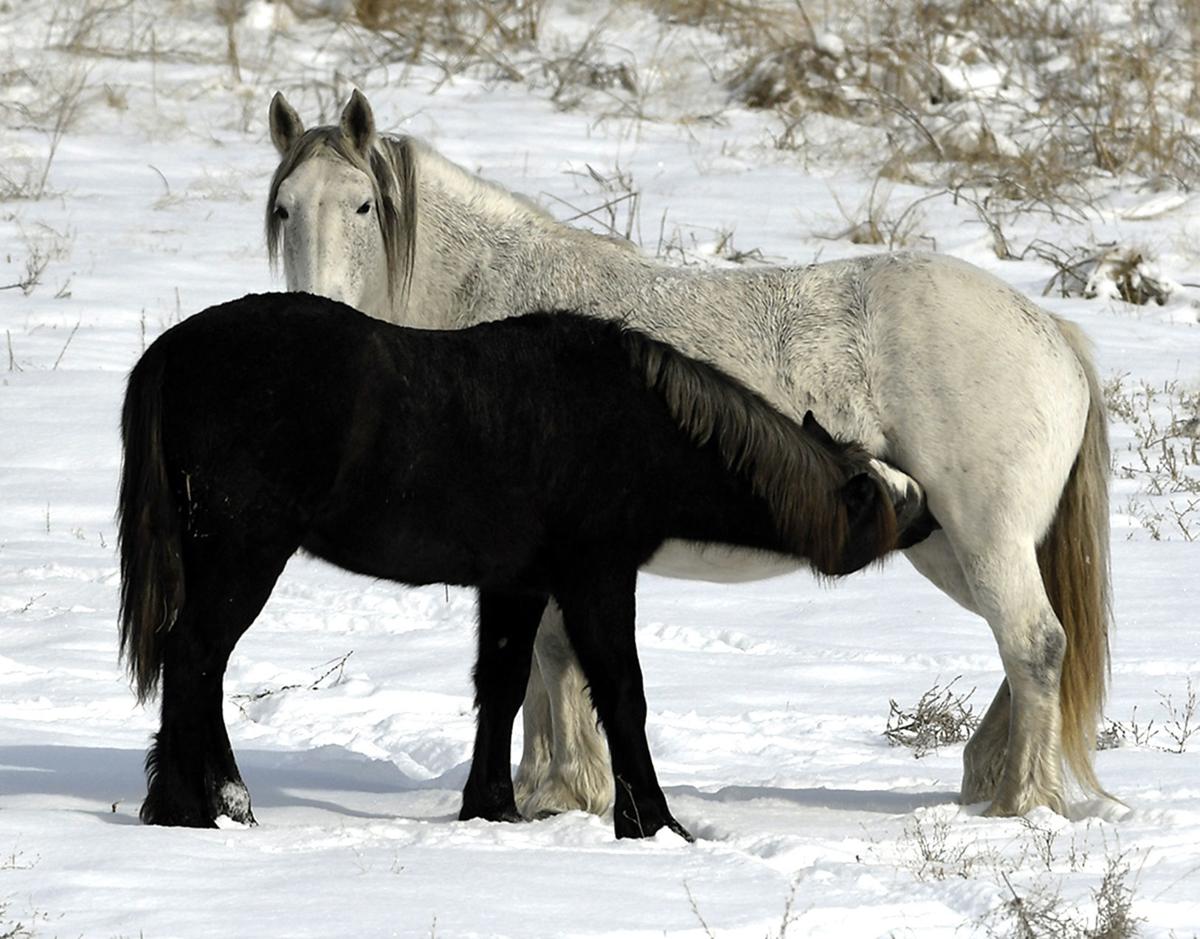 A wild mare nurses her foal recently on the MPG Ranch. Most of the horses in the band are now born in the wild. 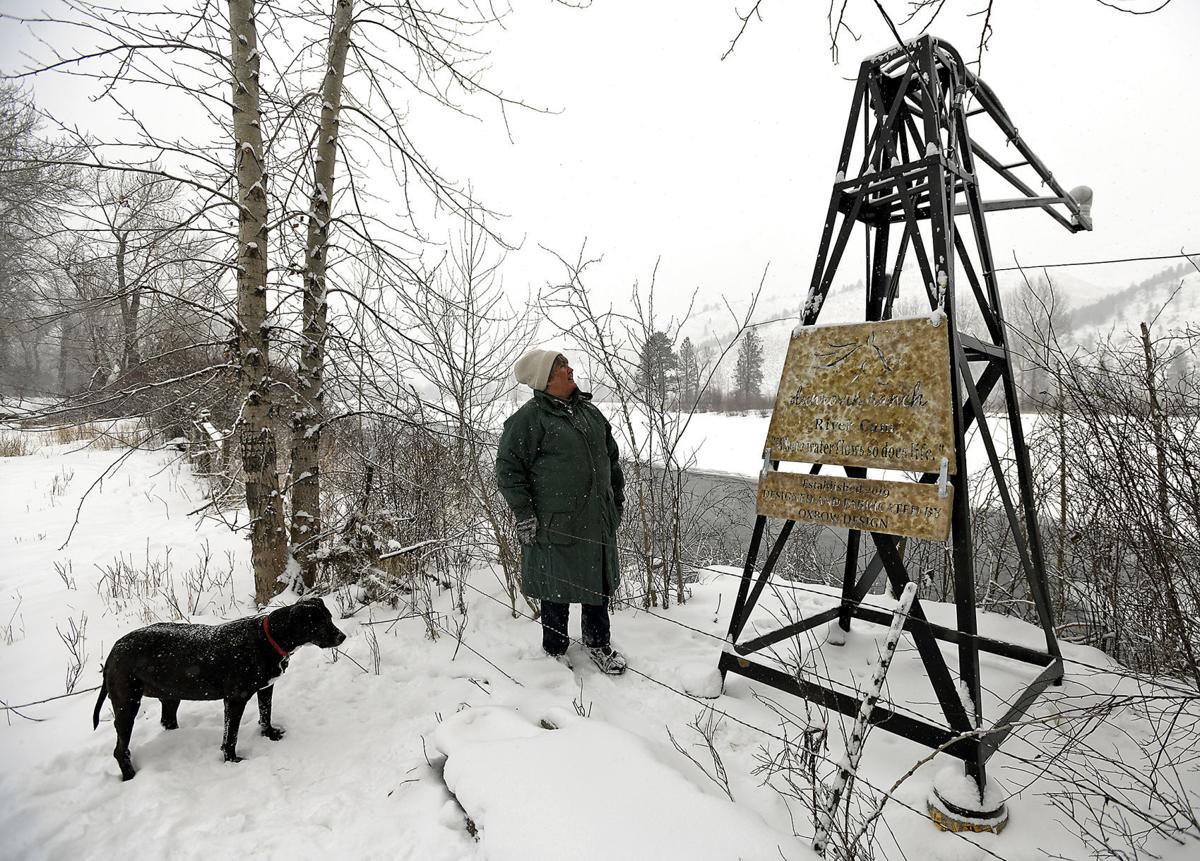 SuZanne Miller stands next to the webcam on Dunrovin Ranch in Lolo, where the camera frequently captures wild horses across the Bitterroot River.

A group of wild horses run through a field on the MPG Ranch recently. The horses have a complex social structure that makes them inquisitive and gives them a better defense against predators. 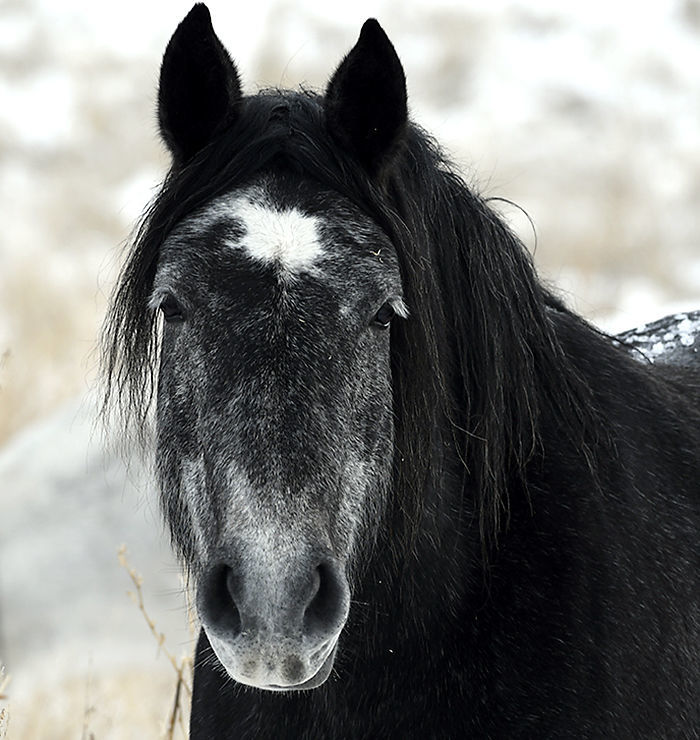 The grizzled face of a wild horse looks out over winter grasslands in the Bitterroot valley.

“They’re remnants from the time when the Salish had horses here,” said SuZanne Miller, who often sees the elusive bands from her ranch on the Bitterroot River. “All horses in North America are from feral stock brought over by the Spanish. These have been added to by various escapes from local horse owners. But most are born in the wild at this point.”

About 50 horses wander the forests between the Bitterroot and Rock Creek. Rarely seen in the summer, they often gather on the grasslands of the MPG Ranch east of Stevensville in winter. Some travel in bands of 10 or a dozen, while a few lone stallions or bachelor tandems keep more to themselves. They display a grab-bag of varieties, including draft, palomino, pinto, quarter and rodeo rough stock.

They also display an attitude unlike any other wild herbivore in Montana. Gifted with great strength and speed, wild horses will investigate newcomers where deer and elk bolt for cover. That gives them confidence to display curiosity in disconcerting ways.

“There’s a real consciousness in there,” MPG Ranch video supervisor Alan Ramsey said of his encounters with inquisitive horses. “They send out sentries who figure out how the rest of the band should react.”

Wild horse bands differ from other wildlife in remarkable ways. They have complex social structures, with alpha stallions and mares topping a pecking order. The stallions stay with the band year-round, unlike bucks and bulls that often hang in bachelor herds. That gives horses a better defense against predators such as mountain lions, wolves and bears.

They fill a unique niche in the landscape as well. Their full hooves make them the best ice-breakers in the woods, and other species benefit from their ability to open water holes in winter. They also have better teeth for nipping dried grass and brush than elk do.

“They can bite off the two- and three-year-old dead leaves on bunch grass that elk won’t touch,” Ramsey said. “That stuff’s useless to elk until a fire or a horse takes it off.”

A 2014 study Ramsey and Katharine Roggeveen produced for MPG Ranch cataloged the extensive history of wild horses in the Bitterroot Valley. In their compilation, they started by observing North America’s original horse species was about the size of a house cat. The continent’s pre-ice age horse fossils turned up in digs in the Bighorn Basin of Montana and Wyoming dating to 55 million years ago.

Around 4.8 million years ago, the Equus simplicidens  ancestral horse appeared and eventually split into zebras, asses and modern horses. A large concentration of horse fossils has been explored near Hagerman, Idaho. A Pryor Mountain cave in Montana produced a horse bone dated to 13,860 years ago. However, archaeologists conclude that those horses died out of North America around 10,000 years ago during the end of the last ice age. While some remains in Alberta and Texas appear to date between 1,000 and 8,000 years ago, most researchers agree modern horses didn’t return to North America until Spanish settlers brought their mounts from Europe in 1519.

Shoshone Indians appear to be the first tribe to acquire horses in the Northwest, shortly after 1690. The Bitterroot Salish probably got their first herds from the Shoshone sometime between 1700 and 1730. Lewis and Clark reported trading horses with a party of Salish Indians in 1805: “Those people possess ellegant horses (sic).”

Stevensville historians reported that Blackfeet raiding parties often tried to acquire Salish horses in the Bitterroot Valley, where at times at least 4,000 were pastured. A note by the Florence Civic Club mentioned the presence of “wild” horses in the Eight Mile and Woodchuck hills in the 1880s. In 1891, Chief Charlo’s community of Bitterroot Salish made their forced relocation to the Flathead Indian Reservation on Oct. 15, 1891 in a mile-long procession, with several hundred horses.

The wild horses appeared in local news accounts throughout the 1900s. Rodeo promoter Oral Zumwalt had a 12,000-acre ranch in Miller Creek at the southern end of the Missoula Valley and often let his rodeo stock winter in the Sapphire Mountains there. After complaints from other ranchers who said their grazing land was overrun by the rodeo and wild horses, the state Livestock Commission conducted an aerial roundup on the neighboring Shroeder (now MPG) Ranch. Using a dozen helicopters, the wranglers were able to corral 100 of the estimated 240 horses running loose. Three-quarters of those turned out to be branded and were returned to their owners or sold at auction.

That illustrates the wild horse’s odd legal status. The Wild Free-Roaming Horses and Burros Act of 1971 makes all unbranded and unclaimed horses on U.S. public lands wild animals, and prohibits their removal, killing or domestication. The Bureau of Land Management has responsibility for them on federal land. However, Montana law does not acknowledge the existence of wild horses, and prohibits abandoned or stray horses from running at large. Montana Fish, Wildlife & Parks has little to do with them, as they don’t classify as either a big-game or a non-game animal.

“Most of the desire to control them has come from the ranching community,” Miller said. “They can be hard on fences, and they do compete with cows for grass. But it’s a lot less so now because of the change in land ownership here. There are fewer people in the cattle industry. I tell people we have a wild horse herd across the river, and they just roll their eyes.”

Most Montanans see the Missouri Breaks through a rifle scope.