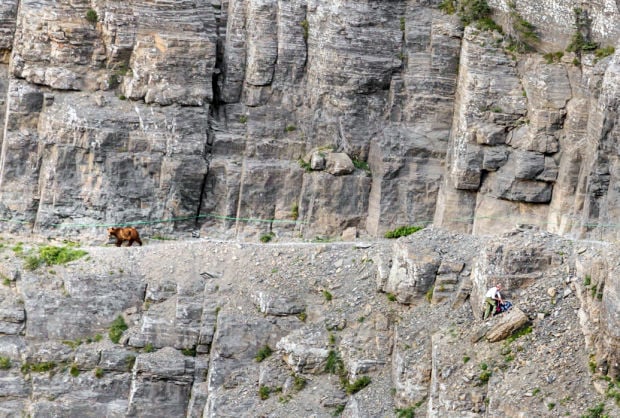 The encounter between a grizzly and human who surprised each other on the Highline Trail in Glacier National Park Monday evening is over, and the bear can be seen continuing its journey while the man, from Durham, North Carolina, is visible in a white shirt behind a boulder and approximately 15 stories above Going-to-the-Sun Road. “He kind of lucked out,” Philip Granrud of Kalispell, who took the picture from a distance of 200 to 300 yards, said of the hiker. “It was the only part of the trail where he could climb down.” 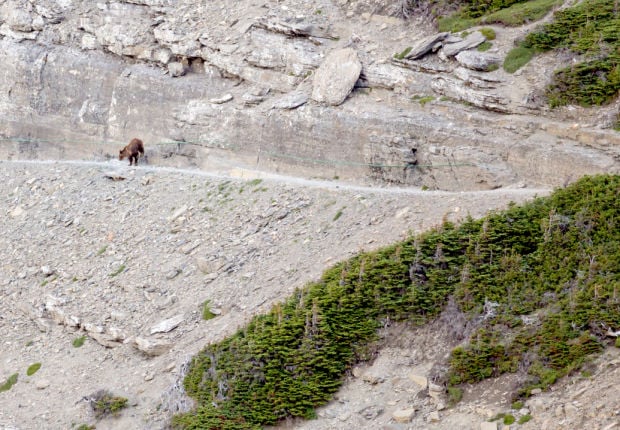 The grizzly, who had been in the trees, seemed to decide to access the Highline Trail by a more difficult route, according to Granrud, in order to avoid a group of hikers that had just passed by as they returned to Logan Pass.

The encounter between a grizzly and human who surprised each other on the Highline Trail in Glacier National Park Monday evening is over, and the bear can be seen continuing its journey while the man, from Durham, North Carolina, is visible in a white shirt behind a boulder and approximately 15 stories above Going-to-the-Sun Road. “He kind of lucked out,” Philip Granrud of Kalispell, who took the picture from a distance of 200 to 300 yards, said of the hiker. “It was the only part of the trail where he could climb down.”

The grizzly, who had been in the trees, seemed to decide to access the Highline Trail by a more difficult route, according to Granrud, in order to avoid a group of hikers that had just passed by as they returned to Logan Pass.

WEST GLACIER – Aware of an incident just two days earlier where a Texas man shot and likely wounded a bear that he said charged him in Glacier National Park, Kalispell photographer Philip Granrud carefully chose the picture he posted on social media this week.

It shows a separate grizzly-human encounter he – and dozens of other people – witnessed near Logan Pass Monday evening.

The picture is plenty dramatic.

In a frame that otherwise shows mostly sheer cliffs, you can make out a grizzly walking on the park’s Highline Trail at the trail’s most precarious spot, where rock walls shoot dizzyingly above on one side, and fall almost straight down on the other for about a quarter-mile stretch.

To the right of the bear, at about the only place on that section where a person could leave the trail without plummeting to his or her death, is a man in a white shirt, hiding behind a boulder.

“It was taken 15 seconds after they spooked each other,” Granrud says. “You could see the bear jump, and you could almost hear the guy go, ‘Oh, crap.’ Then they stood still, watching each other. I could see the guy look over his shoulder like he was thinking about going back, but that really wasn’t a choice.”

Instead, Granrud says, the man “scrambled” over the cliff, down a tenuously small and steep rockslide, and took refuge behind a boulder.

He’s about 10 feet below the trail – and approximately 15 stories above Going-to-the-Sun Highway.

“As soon as the guy left the trail the bear sprinted by the spot,” says Granrud, who witnessed the encounter with the help of a telephoto lens.

“I wanted to show the bear was safely past the hiker,” he goes on about the picture he chose. “I knew about the guy who used a gun, and I thought it was important to show that most of the time, hiker-bear encounters are a pretty benign experience.”

Granrud’s photograph was taken 200 to 300 yards from the Highline Trail, from Oberlin Bend, at approximately 7 p.m.

He was escorting a friend from Minnesota, Molly Nelson, through the park on her first visit there, and they had stopped to photograph mountain goats.

“A family came down to where we were at and said, ‘Hey, a grizzly was just at Logan Pass and could be headed this way,’ ” Granrud says.

Not long after, on the other side of Going-to-the-Sun, a grizzly appeared above the Highline Trail.

“He came out of the trees, and there were hikers below him who never even saw him,” Granrud says. “The bear was only 50 feet away from them. I really think he was trying to avoid them, because he kind of climbed out on the cliffs and came down off the cliff part to get on the trail.”

By this time, Granrud and Nelson were two of about 50 people who were watching the unfolding drama from Oberlin Bend, including a park ranger who trained binoculars on the scene and counted the people on the trail.

Granrud estimates there were another 20 people, in various groups, visible hiking along the trail a much greater distance from the bear than was the man, who was alone.

The onlookers watched the grizzly and the lone hiker walk toward each other on the trail, neither aware of the other until both rounded a bend and came face to face from a distance of perhaps 15 yards.

“The spectators were oohing and ah-ing, and a couple of them started screaming during the encounter,” Granrud says. “Then there were sighs of relief all around when the man got behind the boulder and the bear went past.”

While others watching may have worried the grizzly would attack the man, Granrud say he was “more fearful the guy would fall off the cliff.”

The man later told Granrud he was from Durham, North Carolina. The photographer – and a park ranger – spoke to him at the trailhead at Logan Pass after the encounter.

The hiker “was pretty calm about it – I think he was definitely in shock,” Granrud says. “He was like, ‘Did that really just happen?’ He joked about it, but you could tell his heart was pumping.”

The North Carolinian wasn’t the only person to encounter the grizzly on the Highline Trail, just the only one with no place to go but essentially over the side of a cliff.

“After that I saw several groups with six, eight people in each, take off and hide behind trees and boulders” as the grizzly sauntered farther down the trail, Granrud says. “They were in a place that wasn’t as steep, and the trail just cleared of people. I didn’t see a lot try to run. It looked like they were thinking safety in numbers, and they got off to let the bear pass.”

The site is roughly 5 miles, as the crow flies, from the scene of a Saturday incident where a hiker from Texas reported he was charged by a bear on the Mount Brown Lookout Trail.

The man discharged his bear spray, then fired one round from his handgun that authorities believe struck the bear, which turned and ran after being hit.

It is unknown whether that was a grizzly or black bear, and the bear has not been located.

While it has been legal for people to carry firearms in national parks since 2010, it is illegal to discharge one in Glacier, and the incident remains under investigation.

EAST GLACIER – If you hike to Buffalo Lakes and beyond in the Badger-Two Medicine area, you’…

Influxes of monsoon moisture are headed to western Montana Friday and Saturday.

WEST GLACIER – A second gun has been fired in Glacier National Park this summer – this one in an effort to summon help for an injured hiker.

Montana FWP: Be prepared for bear encounters this fall

WEST GLACIER – A Great Falls attorney is expected to appear here Friday to enter a not guilty plea in U.S. District Court on behalf of a Texas…

WEST GLACIER – The case against a Texas man accused of illegally discharging a firearm in Glacier National Park this summer, when he shot a gr…

WEST GLACIER — This weekend is the last chance to drive to Glacier National Park's Logan Pass this year.

WEST GLACIER – Four times this year that authorities are aware of, guns have been discharged inside Glacier National Park – where it’s been le…

A look back at the most-read stories and most-viewed images of 2014.

Here in Montana, we tend to see our fair share of wildlife, even those of us who live in the "cities."  From a woman who fended off a bear wit…